We report a procedure to linearly scale-up the synthesis of 2,8-bis(3,6-di-tert-butyl-9H-carbazol-9-yl)dibenzothiophene-S,S-dioxide (compound 4) and 2,8-bis(10H-phenothiazin-10-yl)dibenzothiophene-S,S-dioxide (compound 5) using Buchwald-Hartwig cross-coupling reaction conditions. In addition, we demonstrate a scaled-up synthesis of all non-commercially available starting materials that are required for the amination cross-coupling reaction. In the present article, we provide the detailed synthetic procedures for all of the described compounds, alongside their spectral characterization. This work shows the possibility to produce organic molecules for optoelectronic applications on a large scale, which facilitates their implementation into real world devices.

Over the past few decades, researchers have investigated the utilization of organic molecules and their derivatives in organic light-emitting diodes (OLEDs) since their first introduction in 1987.1 The discovery of electroluminescence (EL) has led to organic materials finding a wide range of applications in displays and lighting.2 Enormous interest in producing new organic compounds and studying their photophysical properties are driven by the advantages of OLEDs over the existing technologies; most notably as they are more energy-efficient and can offer superior device performance whilst maintaining high flexibility, small thickness, and low weight. Nevertheless, in comparison to inorganic light-emitting diodes (LEDs), OLEDs still suffer disadvantages that prevent this technology from large scale commercial production, including shorter lifetimes, and low efficiencies. Until recently, most research was based on first generation OLEDs and emission relied on the fluorescence of the organic materials. Due to the fact that fluorescence can occur only from the singlet state, the maximum theoretical internal quantum efficiency (IQE) of the device is only 25%.3,4,5 By utilizing heavy-metal containing organic complexes (such as Ir, Pt), researchers could overcome the 25% efficiency barrier by harvesting the electrons from both the singlet and triplet states by a radiative transition process.6,7,8 Thus, the maximum theoretical efficiency of second generation phosphorescent OLEDs (PHOLEDs) can be as high as 100%.9,10 Nowadays, many commercial OLED devices utilize green and red phosphorescent emitting organometallic complexes based on iridium.11 Although these materials have gained widespread use in mobile displays and other electronic applications, the cost of the heavy-metal precursor salts and their short lifetimes have pushed researchers to look for alternatives.

There are several objectives that must be achieved for widespread commercialization of OLED technology, such as high stability, efficient power consumption and low production cost of the device. In recent years, it has been shown that thermally activated delayed fluorescence (TADF) emitters can be an effective substitute to PHOLED materials to reach the same IQE value, with these materials now considered as third generation OLED materials.12,13,14 Purely organic TADF emitters can be prepared in a few steps from readily available starting materials making the overall device fabrication commercially attractive to the market. To date, there are several comprehensive literature reviews covering all the aspects from material synthesis to the device fabrication.15,16,17,18 The main issue with TADF material preparation is the use of Pd-containing catalysts for the cross-coupling reactions. In order to show the potential for TADF material preparation on an increased scale. we scaled-up the synthesis of TADF emitters from starting materials to the desired products 4 and 5 (Figure 1).22,23 This detailed protocol is intended to help new practitioners in the field to understand the information associated with the synthesis of TADF materials.

Caution: Please review all relevant material safety data sheets (MSDS) prior to use. Several of the chemicals used in the synthesis are highly toxic and carcinogenic. When working with silica gel, a protective respiratory mask must be worn to prevent particle inhalation. Please observe all appropriate safety rules when performing a chemical reaction including the use of engineering controls (fume cupboard) and personal protective equipment (safety glasses, gloves, lab coat, full length pants, closed-toe shoes).

All reagents and solvents were purchased commercially and were used without any further purification. 1H and 13C NMR spectra were recorded on a 400 MHz NMR spectrometer using CDCl3 as the solvent. Proton NMR chemical shifts are reported as δ values in ppm relative to deuterated solvents: CDCl3 (7.26). Data are presented as follows: chemical shift, multiplicity and coupling constant(s) (J) are in Hz. Multiplets are reported over the range (in ppm) they appeared. Carbon NMR data were collected relative to the corresponding solvent signals CDCl3 (77.16). Melting points were measured using a melting point apparatus. Matrix assisted laser desorption ionisation-time-of-flight (MALDI-TOF) mass spectrometry were run on a Shimadzu Axima-CFR spectrometer (mass range 1-150 000 Da).

1. Synthesis of the reported compounds

The chemical structures of the final TADF emitters (Figure 1) are marked blue for the electron-donating groups and red for the electron-withdrawing core. An alkylated carbazole derivative and a dibrominated dibenzothiopene-S,S-dioxide acceptor molecule can be prepared from inexpensive starting materials (Figure 2). The final products can be prepared by a large-scale version of the Pd-catalyzed amination cross-coupling reaction (Figure 3). 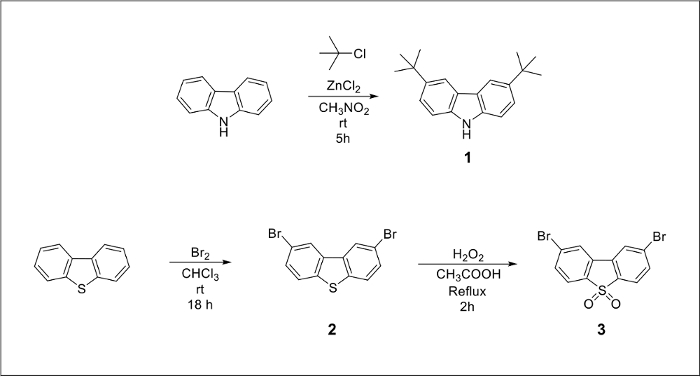 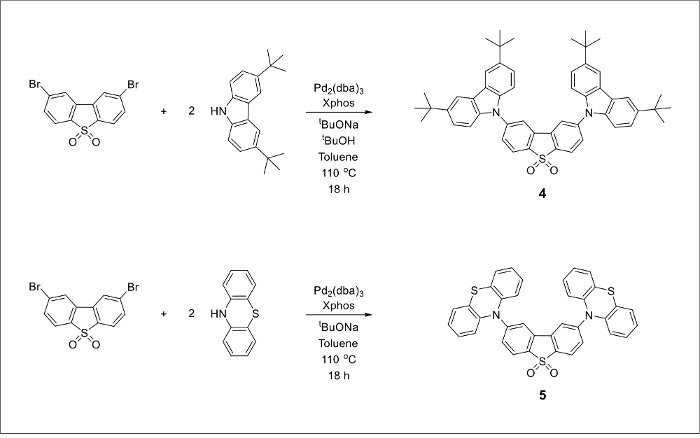 Figure 3. Buchwald-Hartwig cross coupling reactions between 2,8-dibromodibenzothiophene-5-dioxide (compound 3) and a corresponding secondary amine to produce compounds 4 and 5. Please click here to view a larger version of this figure.

The purpose of this paper is to show the large-scale synthesis of highly efficient organic materials (Figure 1) for OLED applications from commercially available starting materials. Due to the fact that previous reports only describe the final cross-coupling reaction step and refer to some of the outdated publications, we report the detailed step-by-step synthesis of all the materials together with their full NMR and mass-spectrometry characterization for improved reproducibility of the experiments.

Both emitters bear the same dibenzothiophene-5-dioxide electron acceptor core. The first step in the preparation of compound 3 (Figure 2) is the bromination of the commercially available dibenzothiophene molecule.20 The larger scale reaction occurs overnight with a yield of 83%. The resulting dibrominated compound 2 can be further oxidized with a solution of hydrogen peroxide in glacial acetic acid, yielding 19.3 g of a white powder after filtration and washing.21 Compound 3 was used in the cross-coupling reaction without any further purification.

The difference in photophysical characteristics between the compound 4 and 5 lies in the electron-donating properties of the amine units. One of the compounds has peripheral alkylated carbazole units while the other has phenothiazine groups. The phenothiazine molecule can be purchased from chemical vendors and used without any modifications. However, in the case of compound 4 tert-butyl groups need to be introduced onto the aromatic ring of the carbazole unit in order to increase solubility in organic solvents. It was reported that in the absence of suitable alkyl groups, the solubility of the product drops, which results in a significantly lower reaction yield.24 Alkyl groups can be introduced into each phenyl ring using a Friedel-Crafts reaction between tert-butyl chloride and 9-H-carbazole in the presence of zinc (II) chloride in nitromethane based on the electrophilic aromatic substitution mechanism.19 It was found that the purity of the resulting product is not high enough and several by-products are present in the mixture; therefore the crude grey powder must be additionally purified by column chromatography resulting in isolation of 13.1 g of compound 1 recovered as a white powder.

The desired TADF emitters 4 and 5 were synthesized via palladium-catalyzed carbon-nitrogen cross-coupling reactions using previously described literature procedures.22,23 We found that increasing the amounts of the starting materials does not negatively influence the yield of the desired product, suggesting that further increases to the reaction scale are possible. Compounds 4 and 5 can be obtained in 63% and 55% yield, respectively.

In conclusion, a detailed guideline on how to prepare highly efficient organic molecules for light emitting applications, starting from readily available materials, with the possibility to scale up the whole synthetic procedure has been demonstrated. Through this work, the intention is that large-scale synthesis of many other TADF emitters will ensure a fast transition of the technology from the laboratory bench to industrial applications.

This research has received funding from the European Union's Horizon 2020 research and innovation program under the Marie Skłodowska-Curie grant agreement H2020-MSCA-ITN-2015/674990 project "EXCILIGHT". PJS thanks the Royal Society for a Wolfson Research Merit Award. 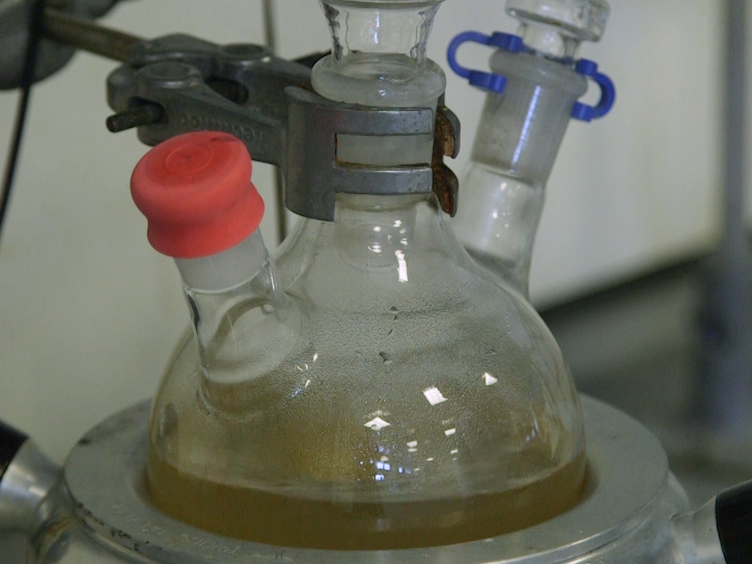