A protocol for the controlled photoredox ring-opening polymerization of O-carboxyanhydrides mediated by Ni/Zn complexes is presented.

Here, we describe an effective protocol that combines photoredox Ni/Ir catalysis with the use of a Zn-alkoxide for efficient ring-opening polymerization, allowing for the synthesis of isotactic poly(α-hydroxy acids) with expected molecular weights (>140 kDa) and narrow molecular weight distributions (Mw/Mn < 1.1). This ring-opening polymerization is mediated by Ni and Zn complexes in the presence of an alcohol initiator and a photoredox Ir catalyst, irradiated by a blue LED (400 - 500 nm). The polymerization is performed at a low temperature (-15 °C) to avoid undesired side reactions. The complete monomer consumption can be achieved within 4 - 8 hours, providing a polymer close to the expected molecular weight with narrow molecular weight distribution. The resulted number-average molecular weight shows a linear correlation with the degree of polymerization up to 1000. The homodecoupling 1H NMR study confirms that the obtained polymer is isotactic without epimerization. This polymerization reported herein offers a strategy for achieving rapid, controlled O-carboxyanhydrides polymerization to prepare stereoregular poly(α-hydroxy acids) and its copolymers bearing various functional side-chain groups.

Poly(α-hydroxy acid) (PAHA) is an important class of biodegradable and biocompatible polymers with applications ranging from biomedical devices to packaging materials.1,2 Although PAHAs can be prepared directly by polycondensation of α-hydroxy acids, the molecular weights (MWs) of the resulting PAHAs are generally low.3 Ring-opening polymerization (ROP) of lactones (e.g., lactide and glycolide) is an alternative synthetic approach that provides the better control on MWs and molecular weight distribution (Đ) than polycondensation. However, the lack of side-chain functionality in PAHAs and in lactones limit the diversity of physical and chemical properties and their applications.4,5 Since 2006, 1,3-dioxolane-2,4-diones, so-called O-carboxyanhydrides (OCAs), which can be prepared with a rich variety of side-chain functionalities,6,7,8,9,10,11,12,13 have emerged as an alternative class of highly active monomers for polyester polymerization.14,15

Catalytic systems for the ROP of OCAs can be categorized into organocatalysts,8,12,16,17 organometallic catalysts12,18,19,20,21 and biocatalysts.22 Generally, the ROP of OCAs promoted by organocatalyst proceeds in a more or less uncontrolled manner, such as epimerization (i.e., lack of stereoregularity) for OCAs bearing electron-withdrawing groups,8,17 unpredictable MWs, or slow polymerization kinetics.13 To address these problems, an active Zn-alkoxide complex was developed for the ROP of OCAs.12 Well-controlled ROPs were achieved at a low degree of polymerization (DP) without epimerization. However, this Zn-alkoxide catalyst cannot efficiently produce polymers with a high degree of polymerization (DP ≥ 300).13

We have recently reported a promising approach that greatly improves customizability and efficiency of PAHA synthesis (Figure 1).13 We merge photoredox Ni/Ir catalysts that promote OCA decarboxylation with zinc alkoxide to mediate ring-opening polymerization of OCAs. The use of low temperature (-15 °C) and photoredox Ni/Ir catalysis synergistically accelerates ring-opening and decarboxylation of OCA for chain propagation while avoiding undesired side reactions, e.g., the formation of Ni-carbonyl.23,24 Upon transmetalation with Ni complex the active Zn-alkoxide is located at chain terminus for chain propagation.13

In this protocol, we add fresh prepared (bpy)Ni(COD) (bpy = 2,2'-bipyridyl, COD = 1,5-cyclooctadiene), Zn(HMDS)2 (HMDS = hexamethyldisilazane),25 benzyl alcohol (BnOH) and Ir[dF(CF3)ppy]2(dtbbpy)PF6 (Ir-1, dF(CF3)ppy = 2-(2,4-difluorophenyl)-5-(trifluoromethyl)pyridine, dtbbpy = 4,4'-di-tert-butyl-2,2'-bipyridine) into the monomer l-1 solution26 in a glove box with a cold trap, in the presence of a blue LED light (400-500 nm) and a fan to maintain temperature (Figure 1). The temperature is kept at -15 °C ± 5 °C during the polymerization. The conversion of OCA is monitored by Fourier-transform infrared spectroscopy. The resulting polymer MWs and Đs is characterized by a gel permeation chromatography (GPC). The homodecoupling 1H NMR study determines whether the obtained polymer is isotactic or not. As most chemicals are highly sensitive to moisture, the detailed video protocol is intended to help new practitioners avoid pitfalls associated with the photoredox ROP of OCAs.

1. Preparation of Catalyst and Initiator

NOTE: The whole process is conducted in a glove box with a cold trap. All OCA monomers are recrystallized in the glove box before use.13 Here we give the example of the polymerization at DP=500 ([l -1]/[(bpy)Ni(COD)]/[Zn(HMDS)2]/[BnOH]/[Ir-1] = 500/1/1/1/0.1). Polymers at different DPs can also be prepared by adjusting the monomer mass accordingly.

4. The measurement of polymer's molecular weight by gel-permeation chromatography

The conversion of OCA is monitored by Fourier-transform infrared spectroscopy, as shown in Figure 2. The peak at 1805 cm-1 is assigned as the anhydride bond stretch in OCA; the peak at 1760 cm-1 corresponds to the formation of the ester bond in the polymer. Once the monomer's peak at 1805 cm-1 completely disappears, the polymerization is finished.

The MW and Đ of the resulting polymer is characterized by a gel permeation chromatography. Figure 3 shows controlled photoredox ring-opening polymerization of OCAs with DP ranging from 200 to 1000. Increasing the monomer feed ratio ([l-1]/[Zn(HMDS)2] ratio) leads to an increased and expected Mn of the resulting polymer. Besides, Mn of the polymers increases linearly with initial [l-1]/[Ni]/[Zn]/[Ir-1] ratio up to 1000/1/1/0.1, and all of the Đ values are < 1.1.

The NMR studies measure the stereochemistry of obtained polymer. The ROP of OCAs mediated by organocatalyst such as dimethylaminopyridine can induce epimerization on the α-methine for OCAs bearing electron-withdrawing groups.8,17 The homodecoupling 1H NMR of these polymers exhibited multiple peaks in α-methine region, indicating the loss of the stereoregularity in the polymerization. Using our method, the homodecoupling 1H NMR study shows single peak at α-methine region (5.0 - 5.3 ppm), indicating that the obtained polymer is isotactic without epimerization (Figure 4).

Figure 1. Scheme of Ni/Zn-mediated photoredox ROP of l-1. The photoredox polymerization is conducted in a glove box with cold trap, irradiated by LED light with a cooling fan to maintain the temperature. Please click here to view a larger version of this figure.

Figure 2. FTIR spectra of (a) l-1 and (b) the reaction mixture during the photoredox polymerization. Please click here to view a larger version of this figure. 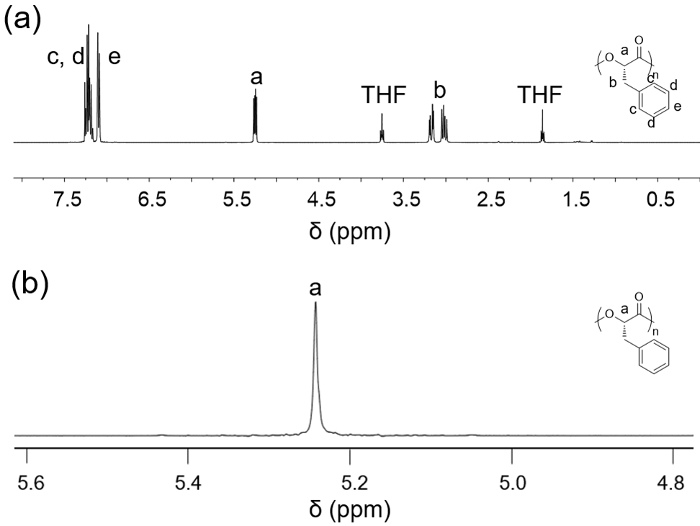 The critical step within the protocol is maintaining the reaction temperature at -15 ± 5 °C. All catalysts solutions and OCA monomers have to be stored in a glove box freezer at -35 °C before the polymerization. The reaction vials have to be pre-cooled in the cold trap. During the reaction, because the LED light dissipates heat, it is necessary to monitor the reaction every 15 - 20 minutes. Once the temperature is raised up to -10 °C, liquid nitrogen should be added into the dewar to cool the trap. The reason for the low temperature is the formation of the Ni(CO) complex at room temperature, which is detrimental to the controlled photoredox polymerization and affects the MW and Đ.13

Synthesis attempts from O-carboxyanhydrides with pendent functional groups by organocatalysts have been plagued by uncontrolled polymerization including epimerization, which hampers the preparation of stereoregular high-MW polymers. This photoredox controlled ROP polymerization can successfully prepare stereoregular high-MW polymers with DP reaching 1000 for various OCA monomers, which are documented in reference 13. The copolymerization of different OCA monomers by sequential addition is also undemanding using our methods. However, for L-mandelic OCA monomers, the MW control has not been achieved at high DPs. We are currently investigating this methodology and trying to develop a new catalyst strategy for the polymerization.

In conclusion, our Ni/Zn-mediated photoredox polymerization protocol offers a strategy for achieving rapid, controlled OCA polymerization to prepare stereoregular poly(α-hydroxy acids) and their copolymers bearing various functional side-chain groups. We expect that our new strategy allows for the generation of new polyesters with desirable macroscopic properties such as rigidity, elasticity, and biodegradability. This method also can be useful for new fabrication techniques such as light-cured nanoimprinting lithography.

The authors declare no competing financial interests. A provisional patent (U.S. Patent Application No: 62/414,016) has been filed pertaining to the results presented in this paper. 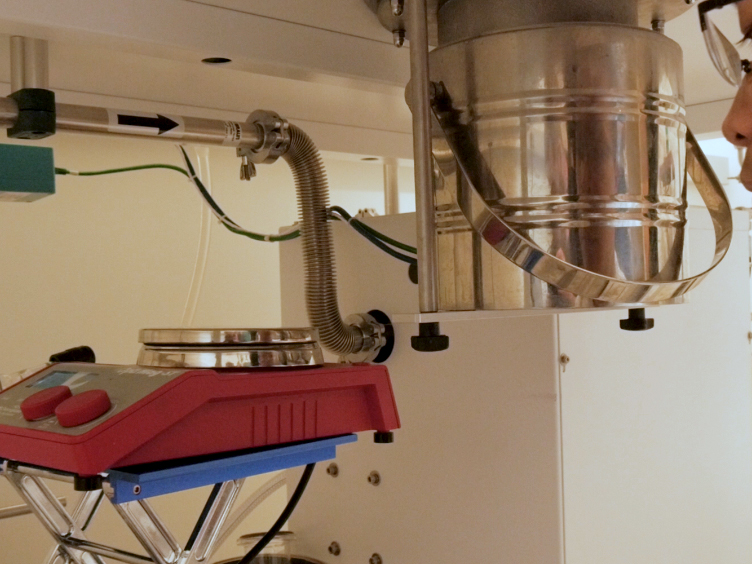