As conventional cigarettes are a leading cause of preventable vascular disease9, there is a growing interest in the vascular health risk of electronic cigarette use10,11,12. In order to study the effects of electronic cigarettes on the vascular system, our lab developed a microcontroller operated smoking/vaping device (Figure 1)8. This device is capable of generating liquid extracts of either conventional cigarette smoke or electronic cigarette aerosol in either aqueous or organic solvents. As airflow is controlled by the combination of an adjustable air flow regulator and a PBASIC timing program, the device can be used to generate extracts according to any number of user defined protocols. Here we detail the assembly and operation of this device as well as two potential applications: in vitro cell viability assessment and gas-chromatography mass-spectrometry.

1. Assembly of the Device

Figure 2: Electrical Schematic and PBASIC Code. Figure 2A displays the electrical schematic for assembling the electrical circuit necessary to activate both the normally open solenoid valve and the heating coil of button activated electronic cigarettes (through the 510 threaded electronic cigarette tank base). The electrical parameters of the heating coil (P: Power; R: Resistance; and I: Current) are projected and should be empirically verified with a multimeter post assembly. Figure 2B displays the PBASIC timing program needed to control the circuit in Figure 2A (also available at https://github.com/ChastainAnderson/SVL). The timing constants SVT & IPT (#5 & #6) are in units of ms and are set to provide an activation time of 2 seconds and a downtime of 28 s. Please click here to view a larger version of this figure.

Figure 3B demonstrates the volatility based separation of electronic cigarette components from a commercial electronic cigarette by gas chromatography. The components were then identified via quadrupole mass spectrometry. Identified components, in order of volatility, include: propylene glycol, acetyl propionyl, chlorobutanol, glycerol, nicotine, and 3-nitropthalic acid. Of these only propylene glycol, glycerol, and nicotine were disclosed on the product label1. 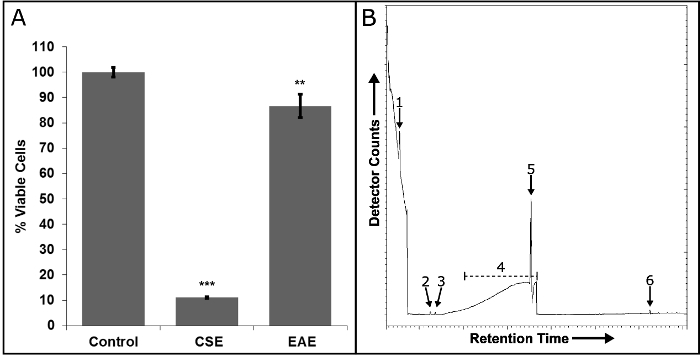 The most critical elements of this protocol are ensuring the device is clean at the start and finish of each extraction, and ensuring that all seals are maintained so that air flow remains consistent. If the device is not properly cleaned, there is a risk of carry over between samples. Additionally, if the device is left unclean for an extended period of time condensed aerosol and dried solvent can block the system. Note that it is normal for there to be a pressure drop when puffing a conventional cigarette and the airflow meter should be adjusted to provide the desired airflow during the puff, not while the device is pulling room air. A key feature of this method is the ability to be adapted to keep up with the advancement of electronic cigarette technology. For instance, many electronic cigarettes require button press activation of the heating coil. This device directly incorporates the heating coil into the control circuit (Figure 2A) mimicking a button press at user programmed intervals. The primary limitations of this method arise from the lack of well characterized standard operating procedures for electronic cigarette use. While we can use a research reference cigarette14 and international protocols15,16 for conventional cigarettes, we are merely adapting these methods to electronic cigarettes and cannot guarantee that it appropriately models electronic cigarette user behavior. Additionally, this protocol produces extract in a liquid medium. While this is appropriate for certain cell types, such as endothelial cells, other cell types, such as airway cells, may be better studied through direct exposure to electronic cigarette aerosol.

The nature of this device allows it to be updated as new standard operating procedures are developed. Several points of modification present themselves that could allow for the device to be tailored to specific questions. Newer electronic cigarettes encompass a higher range of wattage than earlier models of electronic cigarettes17. In the schematic presented in Figure 2A, both the resistor adjacent to the heating coil and the heating coil itself could be swapped for components with different resistance values (or even variable resistance) to modulate the final power used to aerosolize the electronic cigarette liquid. Final theoretical power in the atomizer can be calculated with the conventional power equations:

where P: Power; V: Voltage; R: Resistance; and I: Current.

Here, we have presented a programmable laboratory device capable of generating liquid extract from the conventional cigarette smoke or electronic cigarette aerosol. This device can accommodate a diverse array of product designs (such as the leading commercial brands of electronic cigarette) and the extraction process can be customized to user specifications. In this specific instance, we have demonstrated the use of generated extract in an endothelial cell viability assay; however, the extracts generated by this device could be applied to any type of single cell population as well as co-culture, explant, or other in vitro model. These extracts are compatible with a wide number of frequently used biological assays including reactive oxygen species detection, cell proliferation assays, and conventional immuno-staining. Moreover, the ability to break down the composition of electronic cigarette extract via gas-chromatography mass-spectrometry provides a starting point for detailed studies of individual aerosol components. Overall, this device provides an accessible entry point to electronic cigarette research. 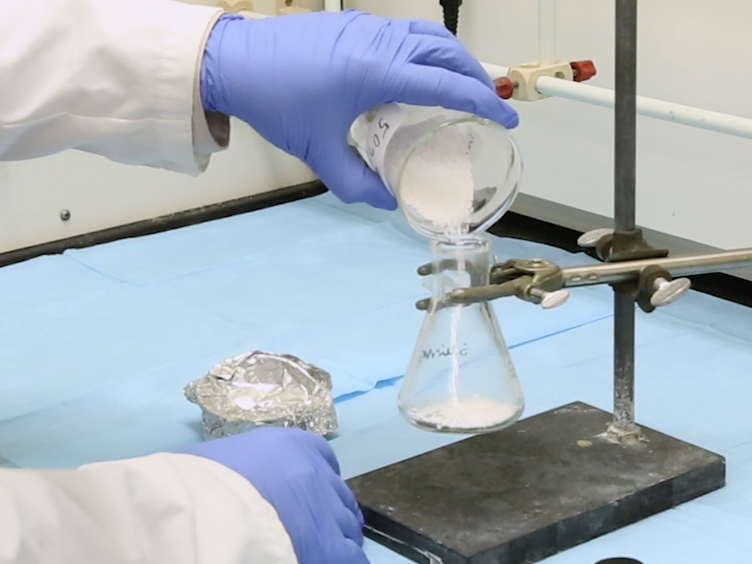