Laparoscopic pancreatoduodenctomy (LPD) may offer advantages over open pancreatoduodenectomy, including early postoperative mobilization, less delayed gastric emptying and a shorter hospital stay. However, LPD is technically challenging and not well-standardized, especially regarding the pancreatic anastomosis. We describe a standardized technique for the pancreatic anastomosis during LPD: modified Blumgart pancreaticojejunostomy.

Minimally invasive pancreatic resections are technically demanding but rapidly increasing in popularity. In contrast to laparoscopic distal pancreatectomy, laparoscopic pancreatoduodenectomy (LPD) has not yet obtained wide acceptance, probably due to technical challenges, especially regarding the pancreatic anastomosis.

The study describes and demonstrates all steps of LPD, including the modified Blumgart pancreaticojejunostomy. Indications for LPD are all pancreatic and peri-ampullary tumors without vascular involvement. Relative contra-indications are body mass index >35 kg/m2, chronic pancreatitis, mid-cholangiocarcinomas and large duodenal cancers.

The patient is in French position, 6 trocars are placed, and dissection is performed using an (articulating) sealing device. A modified Blumgart end-to-side pancreaticojejunostomy is performed with 4 large needles (3/0) barbed trans-pancreatic sutures and 4 to 6 duct-to-mucosa sutures using 5/0 absorbable multifilament combined with a 12 cm, 6 or 8 Fr internal stent using 3D laparoscopy. Two surgical drains are placed alongside the pancreaticojejunostomy.

The described technique for LPD including a modified Blumgart pancreatico-jejunostomy is well standardized, and its merits are currently studied in the randomized controlled multicenter trial. This complex operation should be performed at high-volume centers where surgeons have extensive experience in both open pancreatic surgery and advanced laparoscopic gastro-intestinal surgery.

Laparoscopic surgery has a fast evolution during the last decades and is being performed for increasingly complex surgical procedures. Despite increasing recognition of the benefits of this approach, the majority of pancreatic surgeons remain uncertain about the advantages of this technique1,2,3,4,5. Laparoscopic distal pancreatectomy is now proven to be safe and readily available, although its use in the treatment of adenocarcinoma is still debated2,4,6,7. Since the first report on laparoscopic pancreatoduodenectomy (LPD) in 19948, few studies have described the technique9,10,11,12. Non-randomized studies reported a reduction in delayed gastric emptying and in the estimated intraoperative blood loss has been reported for LPD, as compared to open pancreatoduodenectomy13,14. One randomized trial and a systematic review reported that LPD could reduce a hospital stay, without increasing the overall costs15,16. Unfortunately, LPD seems to be associated with higher rates of postoperative pancreatic fistula and readmission, especially in low volume centers17. The best pancreatic anastomosis technique is still open for debate. The most common anastomoses performed during open pancreatoduodenectomy are being reproduced in LPD. However, as for open pancreatic surgery, the results obtained with LPD are controversial. Safety, feasibility, reproducibility and simplicity of the pancreatic anastomosis have a crucial role in the diffusion of this technique and in its surgical results.

The Blumgart pancreatic anastomosis is a simple and effective technique that combines the principle of duct-to-mucosa anastomosis with jejunal covering over the raw surface of the pancreas18. The Blumgart anastomosis has been associated with lower pancreatic fistula rate to than the other techniques19.

This article aims to demonstrate the safety and feasibility of LPD and specifically the pancreaticojejunostomy (PJ) with a modified Blumgart anastomosis and its surgical oncologic outcome in a patient with an ampullary tumor.

The operation time was 6 hours with 150 mL of blood loss. The patient's postoperative course was uncomplicated. No postoperative pancreatic fistula was detected. The postoperative day 3 amylase level in both drains were 1373 U/L and 804 U/L, which had normalized by day 5 where after the drains were removed. The patient was discharged on the 6th postoperative day. Pathology assessment revealed a 1.5 cm tubulovillous adenoma of the papilla of Vater with low grade dysplasia. Resection margins were microscopically radical (R0) and none of the thirteen lymph nodes harvested were involved by tumor cells. 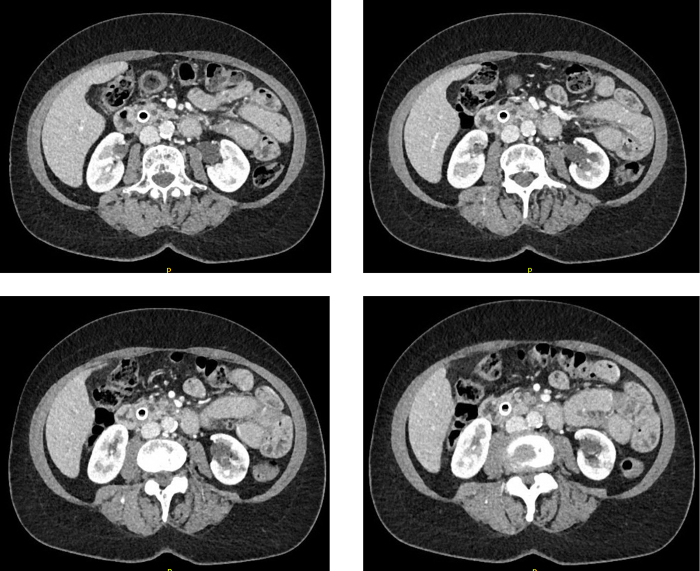 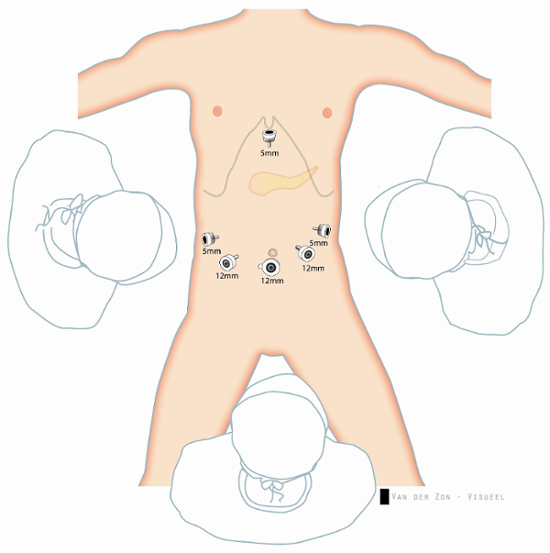 Figure 2 Setting of the patient
The operator is between the legs, the 1st and the 2nd assistant on the left and right, respectively. The procedure is performed by a 6-port technique. Please click here to view a larger version of this figure. 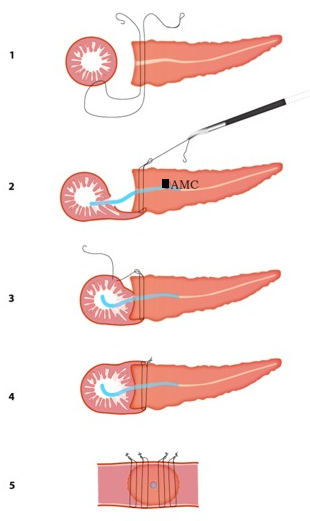 Figure 3 Pancreaticojejunostomy according to the modified Blumgart technique
The modified Blumgart pancreaticojejunostomy is performed with four barbed sutures (3/0), large needle, for the transpancreatic U-sutures (3.1). An 12cm internal 6 or 8 Fr pancreatic stent is placed and the duct-to-mucosa anastomosis is performed using 4-6 absorbable threaded 5/0 sutured with a small blunt needle (3.2). The anastomosis is completed by picking up the ventral side of the jejunum with the original four barbed sutures (3.3, 3.4). Lateral view of the final result (3.5). 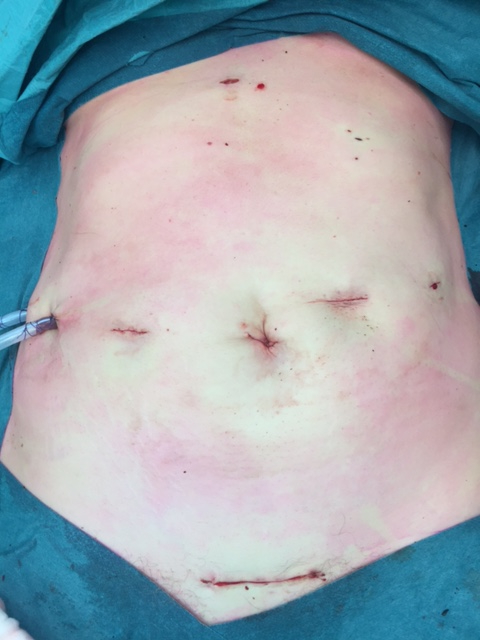 Figure 4 Postoperative Result
This is the final result after laparoscopic pancreatoduodenectomy with modified Blumgart pancreaticojejunostomy.

LPD is a technically challenging but well standardized, safe and reproducible procedure. LPD may offer the advantages of minimally invasive approaches, including early mobilization, early return of bowel function and short hospital stay21. It is widely recognized that laparoscopy offers a better quality of the visualization, enlarging all the details of the surgical field and minimal manipulation of the tissue22. The pathological outcomes are also comparable between the LPD and the open technique. Particularly, the same R0 resection and lymph node harvest rates have been reported10.

The use of the French position, the 6-port technique, 3D laparoscopy (especially during the anastomotic phase) and the appropriate laparoscopic devices can reduce the obstacles of the minimal invasive approach. We suggest also some technical tips, previously described by Palanivelu et al.23 such as the transcutaneous needle in the epigastric region to retract the Teres' ligament or the suture of the Hartmann's pouch to the ventral abdominal wall, to improve the exposure of the hepatoduodeneal ligament.

Unfortunately, there is a price to be paid; this complex operation must be performed at high volume centers where surgeons have extensive experience in both open pancreatic resections and advanced laparoscopic procedures15. Although the modified Blumgart pancreaticojejunostomy is a reproducible technique to perform the pancreatic anastomosis, careful surgery is required. The surgeon needs to take care to not obstruct the pancreatic duct with the barbed sutures. The duct-to-mucosa sutures also needs to be placed meticulously. Each suture is placed under direct visualization, but does not need to be tightened immediately and could be kept initially for traction. When initially cutting the pancreatic duct, it may be kept somewhat longer to facilitate these sutures.

Laparoscopic pancreaticoduodenectomy requires advanced laparoscopic skills and extensive experience with open pancreatic surgery. Further studies need to investigate the oncological results of this technique. Whether the minimal invasive approach is safe and beneficial for these patients has to be establish in a randomized setting. In the Netherlands, the LEOPARD-2 (trial registry NTR5689) multicenter trial is currently randomizing patients between minimally invasive and open pancreatoduodenectomy using the described technique24.

The authors have no acknowledgements. The described technique is used in both institutions of the authors. 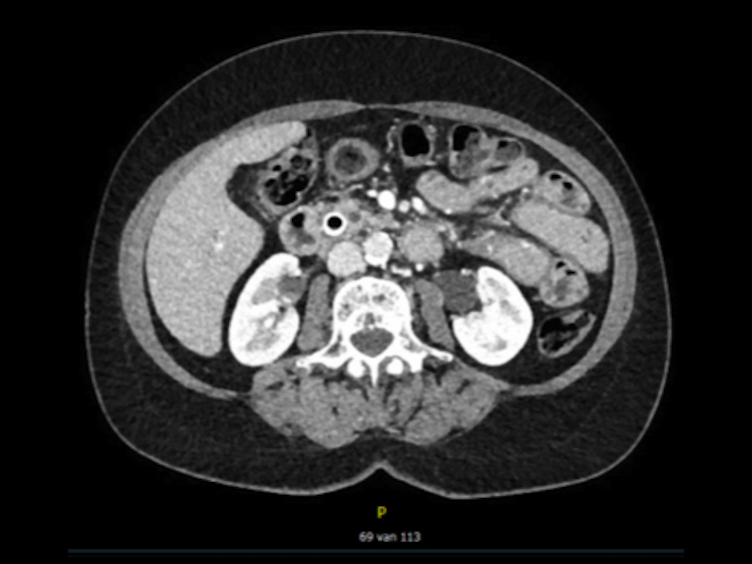