Bio-microelectromechanical systems, also called BioMEMs, are microscale devices that enable the use of small sample and reagent volumes for diagnostic devices in vivo and in vitro. These devices perform various functions such as filtration, sensing, or synthesis on the microscale, enabling cost savings and improved sensitivity.

This video introduces BioMEMs, touches on their use in the bioengineering field, and presents some prominent methods used in fabrication. Additionally, this video discusses some key challenges associated with miniaturization of devices, as well as some applications of the technology.

Bio-microelectromechanical systems, also called BioMEMs, are microscale devices that enable the use of small sample and reagent volumes for diagnostic devices in vivo and in vitro. These devices perform various functions such as filtration, sensing, or synthesis on the microscale, enabling cost savings and improved sensitivity.

This video introduces BioMEMs, touches on their use in the bioengineering field, and presents some prominent methods used in fabrication. Additionally, this video discusses some key challenges associated with miniaturization of devices, as well as some applications of the technology.

Through the use of low sample and reagent volumes as well as parallel processing, miniaturizing analytical devices to the micro scale saves both time and cost. These tiny instruments are referred to as Bio Micro-Electro-Mechanical Devices also known as BioMEMs. BioMEMs are used as miniaturized diagnostic devices in vivo or in vitro and can perform various functions such as sampling, filtration reactions, or detection. In addition, their dimensions enable Improved sensitivity and selectivity in analytical devices. This video will introduce common BioMEMs devices used in research, prominent fabrication methods, and key challenges in the field.

BioMEM devices are typically made using microfabrication techniques in a clean room and have at least one dimension on the micrometer scale. Upon fabrication, the device is integrated to larger instrumentation. Common BioMEM devices are Micro-total Analysis Systems, also called Lab-on-a-chip. These systems perform all or part of a specific analysis. For example microfluidic devices are one of the most common types of Lab-on-a-chip systems. Microfluidic devices possess microscale channels on a chip, which enable separations, reactions, and measurements to be made with small sample volumes. Because of the microscale dimensions, these devices utilize pressure driven flow or capillary action to transport analytes or reagents through the channels. Since the system uses laminar flow, mass transfer and mixing is diffusion based. This is preferred over turbulent flow, where mixing is chaotic and irregular. In addition, the dimensions enable a high surface to volume ratio in systems utilizing a surface bound catalyst or enzyme. This encourages enhanced interactions between analytes in the fluid stream and service bound components. Finally, due to their small size, rapid and uniform heat transfer is possible. This enables improved control and uniformity during sample heating. These systems are thus used for a wide range of diagnostic applications or even to fabricate microparticles. Now that we've introduced BioMEMs, let's take a look at how they are typically fabricated.

The most common material used for BioMEMs, especially integrated circuit devices, is silicon. Silicon wafers are typical used as the substrate material where shapes and patterns are created on top of or even etched into the surface. Polymers are often used as well as they are less expensive and sometimes easier to manipulate and prepare. Polymers enable the simple replication of complex structures via injection molding, embossing, or replica molding. Finally, metals are integrated into BioMEMs to enable the improved fabrication of micro-scale circuitry. Metals such as gold, silver, and chromium are deposited in layers using electroplating or evaporation. The majority of complex microstructures are fabricated using photolithography, a technique used to pattern a substrate using light. The substrate, usually a silicon wafer, is first coated with a UV-reactive substance called photoresist. The pattern is then transferred from a mask to the coated substrate using UV light. After various processing steps this pattern is then permanently etched into the silicon substrate leaving a three-dimensional structure. Another technique, often used in conjunction with photolithography, is soft lithography. Soft lithography is a technique that uses polymers to replicate 3D structures. It is call soft lithography because elastomeric polymers are normally used. The most common elastomer used for this is polydimethylsiloxane, or PDMS. PDMS is a silicon based elastomer that is optically clear, non-toxic, inert. PDMS is poured directly onto the micro-structure, then de-gassed and cured. This technique enables the replication of complex structures without the need for complicated or expensive processing steps.

Despite the well-established fabrication methods, there are challenges associated with preparing and using BioMEM devices. First, BioMEM devices utilize sub-micrometer features which can be difficult to fabricate when they are extremely complex or require multiple layers. Miniaturization also introduces physical challenges that would not be encountered on the large scale. For example, defects in surface roughness, channel diameters, or assembled molecules within the device, are amplified due to the small scale, and can change device function. Another challenge is contamination. BioMEM devices must be in contact with the environment, yet must be protected from it at the same time. Dust, unwanted biomolecules or other particulates can easily contaminate the micro-scale structures diminishing or completely destroying device functionality. Thus, fabrication of these devices in a cleaned room is preferred in order to minimize contamination. These miniaturized systems are sometimes used as proof of concept devices that are eventually scaled up to accommodate the analysis of large volumes or an analyte. However, this can present a significant challenge. For example, scaling a microfluidic device to larger dimensions will result in significant changes in fluid flow and mass transfer behavior. As a result, the desired outcome cannot be replicated on the large scale thereby limiting scale up to the use of many smaller devices.

BioMEM devices are used in a wide range of applications in bioanalytical research. For example, microfluidic devices can be employed as extremely small volume bioreactors. In this study a pico-liter bio-reactor was utilized for single cell analysis. Single cells entered the chamber and were able to grow and divide. As the overall cell density increased during growth, individual cells exited the reactor through small channels, enabling single cell analysis. This allowed for the direct measurement of growth rate, morphology, and phenotypic heterogeneity on the single cell level. Microfluidics are also used to enable the rapid separation of biomolecules and other microscale components. In this example, branched microfluidic devices were used to separate beads and cells of similar size. Beads and cells were flowed into the channels and the device then connected to an electrical source to induce an electrical field. Without the applied electric field, the beads flowed through all channels. However, once the field was turned on, the beads were directed only through one. The mixture of beads and cells could then be separated into different channels using this technique. Finally, BioMEM devices are often used as miniature bioelectronics. In this example, a field effect transistor, or FET, was made on the microscale. FETs use an electric field to control the electrical conductivity of the semi-conductor material in the device. This FET was functionalized with silicon nano-wires and probe molecules which are sensitive to changes in the environment. It was then used to sense biological targets, such as DNA or biomarkers.

You've just watch Jove's overview of BioMEMs. You should now understand what BioMEMs are, some common techniques used to fabricate them, their challenges and how they are used in the bioengineering field. Thanks for watching. 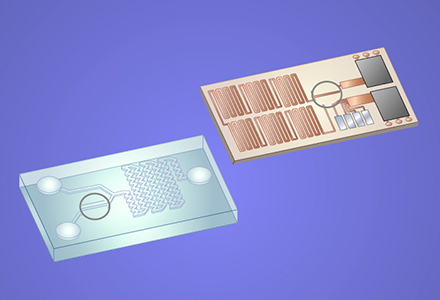