Ovarian granulosa cells (GC) are the major source of estradiol synthesis. Induced by the preovulatory luteinizing hormone (LH) surge, cells of the theca and, in particular, of the granulosa cell layer profoundly change their morphological, physiological, and molecular characteristics and form the progesterone-producing corpus luteum that is responsible for maintaining pregnancy. Cell culture models are essential tools to study the underlying regulatory mechanisms involved in the folliculo-luteal transformation. The presented protocol focuses on the isolation procedure and cryopreservation of bovine GC from small- to medium-sized follicles (< 6 mm). With this technique, a nearly pure population of GC can be obtained. The cryopreservation procedure greatly facilitates time management of the cell culture work independent of a direct primary tissue (ovaries) supply. This protocol describes a serum-free cell culture model that mimics the estradiol-active status of bovine GC. Important conditions that are essential for a successful steroid-active cell culture are discussed throughout the protocol. It is demonstrated that increasing the plating density of the cells induces a specific response as indicated by an altered gene expression profile and hormone production. Furthermore, this model provides a basis for further studies on GC differentiation and other applications.

Successful ovulation and luteinization depend on finely tuned and well-orchestrated molecular alterations in different somatic follicular cell types. Since details of these developmental processes are not yet fully understood, further clarification is required. In vivo approaches are elaborate and costly and, in particular, fail to address specific molecular mechanisms that occur during folliculogenesis. Therefore, reductionistic in vitro models are needed in addition, to provide insight into cellular and molecular details. Different studies describe the culture of whole follicles in the context of in vitro fertilization techniques1,2,3. Because researchers are interested in mechanisms of differentiation, many studies focus on follicular GC. These cells, directly associated with the oocyte, are the major sources of estrogen production and, thus, play an essential role throughout folliculogenesis and luteinization4.

Immortalized cell lines of GC have been developed from different species. Most of them, however, do not show a sufficient steroid hormone production5. So far, only one cell line of bovine GC has been established6, but this line lost its steroidogenic activity after several passages7. Therefore, since steroidogenesis and, in particular, estradiol production is an essential feature of GC functionality, it is advisable to study these aspects in primary cell culture models. In previous studies, it was demonstrated that a considerable estradiol production can only be observed under serum-free culture conditions8,9. Further on, the supplementation of a precursor of estradiol synthesis is another prerequisite, as GC fail to express the necessary enzyme that can convert progesterone to androstenedione10. Additionally, the synergistic effect of FSH and IGF-1 supplementation in vitro revealed an optimized activity of aromatase, the key enzyme of estradiol synthesis11. In the present protocol, other important factors that have a substantial impact on the GC culture model are also described. In particular, the cell plating density has tremendous effects on the outcome of the experiment12. Furthermore, a cryopreservation technique of bovine GC that does not significantly interfere with GC physiology in culture could be established. This technique helps to improve the organization of cell culture work and to optimize the preferred plating density.

NOTE: Bovine ovaries were obtained from a commercial slaughterhouse. The collection of abattoir byproducts does not require an ethical approval according to the German law.

4. Preparation of Media and Culture Plates for the Cell Culture

GC plated at 1 x 105 cells/well display a typical fibroblast-like appearance as they form a cell extension comparable to fibroblasts and tend to build clusters (Figure 1a and 1c). Increasing the plating density by 10-fold to 1 x 106 cells/well did not change the morphology but more cell clusters can be observed (Figure 1b and 1d, arrows). As already shown in a previous publication, the collagen coating of the culture dishes largely improved the attachment of the cells13.

Initial cryopreservation did not considerably change the physiological characteristics of cells in culture as compared to those directly cultured from freshly isolated samples. This is shown in Figure 2 as the transcript abundance (measured by qPCR) of several marker genes did not differ when comparing cultured cells derived from either frozen or freshly isolated pools.

Figure 3 shows representative results of the steroid hormone analysis (measured by RIA) in bovine GC cultured at normal vs. high density. The estradiol concentration is significantly decreased in the high-density culture compared to the normal-density culture, whereas the progesterone production tended to be higher.

A comparative analysis of several genes (measured by qPCR) in high- vs. normal-density cultures revealed a significant effect (Figure 4). CYP19A1, encoding the key enzyme of estradiol biosynthesis aromatase, as well as the gonadotropin receptor FSHR, were significantly down-regulated. In contrast, the genes RGS2 and VNN2 showed a significant up-regulation. These results clearly suggest that specific processes of cellular differentiation are induced by increasing the cell plating density. 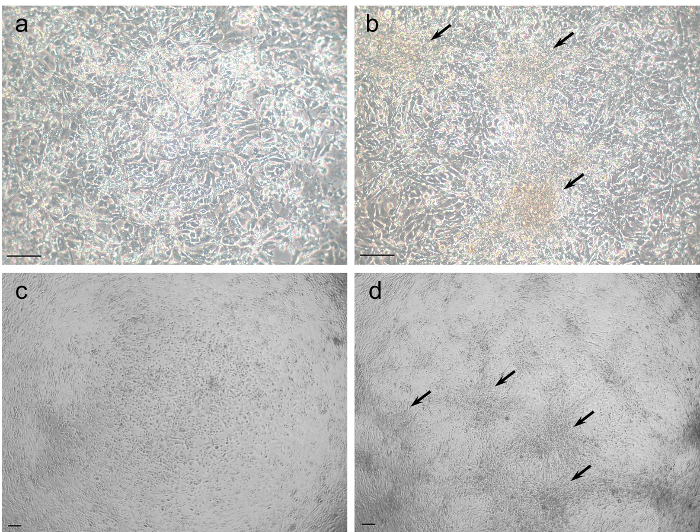 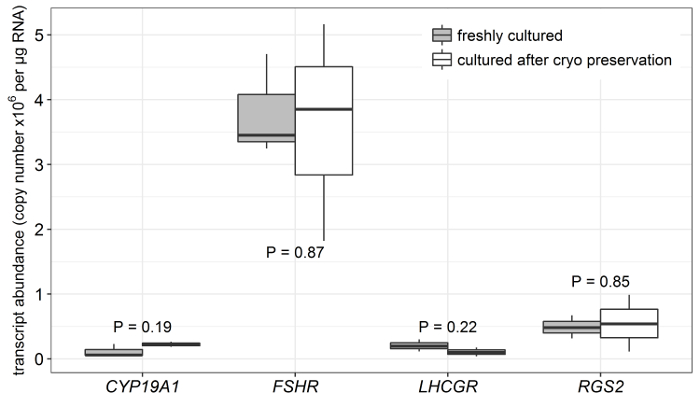 Figure 2: Comparison of cells cultured directly after isolation and after cryopreservation. The cells were cultured at a density of 1 x 105 cells per well. The gene expression of several marker transcripts was evaluated and revealed no difference between cultured cells with or without an initial cryopreservation. The boxplot shows the median of n = 3. Two-tailed Student's t-test, the p-values are included. This figure is reproduced from Baufeld and Vanselow16. Please click here to view a larger version of this figure. 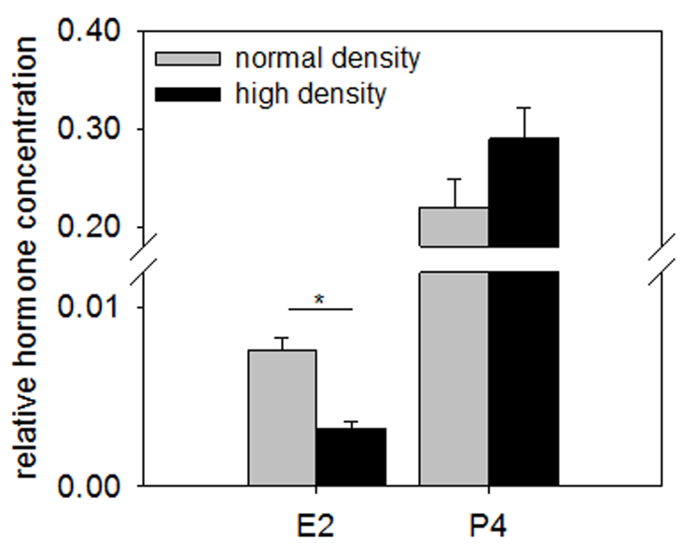 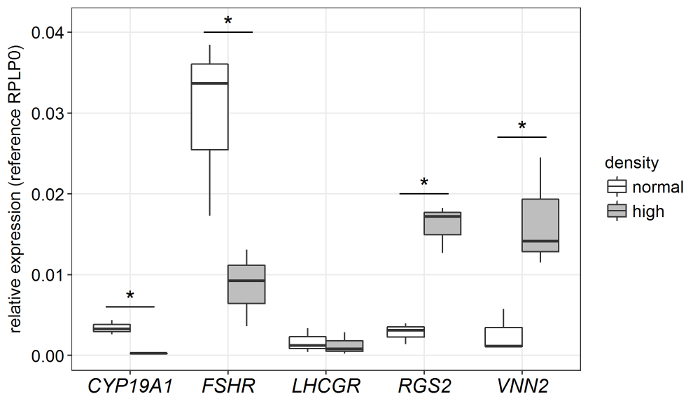 The presented cell culture model provides a tool to analyze granulosa cell differentiation in vitro. Several studies showed that a serum-free cultivation is a prerequisite to maintaining steroid activity in cultured bovine GC or GC of other species8,9. Additionally, coating the culture dish with components of the extracellular matrix (e.g., collagen R)13, improved the attachment of the cells significantly. Another important feature is the prolonged culture period. Recently, it has been demonstrated that a long-term culture is necessary to obtain sufficient steroidogenic activity and a balanced expression of granulosa cell identity markers17. It appears that GC require the time to recover from the physical stress during the isolation procedure.

The cryopreservation technique described here can help to improve the organization of tissue culture experiments by making them more independent from the varying supply with ovaries. According to previous testing, cryopreservation does not affect the GC phenotype or steroid production in culture. Also, the abundance of marker transcripts in cultured cells did not reveal significant differences comparing samples prepared from freshly isolated cells with those previously subjected to cryopreservation16.

A crucial parameter for the present GC culture model is the cell plating density. As shown by the Representative Results, increasing the plating density induced remarkable changes of physiological and molecular characteristics. Several genes are regulated in a specific manner, resembling the changes that are induced by LH stimulation in vivo4,19. The fact that an increasing cell density can drive differentiation-like processes in cultured bovine GC has to be meticulously considered in this GC in vitro model to avoid conflicting results between replicates. Therefore, contradictory results with other studies might be ascribed to different cell densities and should be examined more closely.

The culture model described here revealed to be non-responsive to LH, as the transcripts of the receptor LHCGR are close to the detection limit. Hence, a simulation of the LH surge alike the in vivo situation failed to induce differentiation13. Nonetheless, this model provides a helpful tool to study estradiol-active GC in primary culture, in particular as no functional bovine GC lines exist at present.

Different treatment protocols can be tested in the present GC culture model that help to unravel regulatory mechanisms of steroid production or GC differentiation. Further, single factors that are involved in developmental processes can be separately analyzed. Therefore, this culture model provides a basis for many different applications. 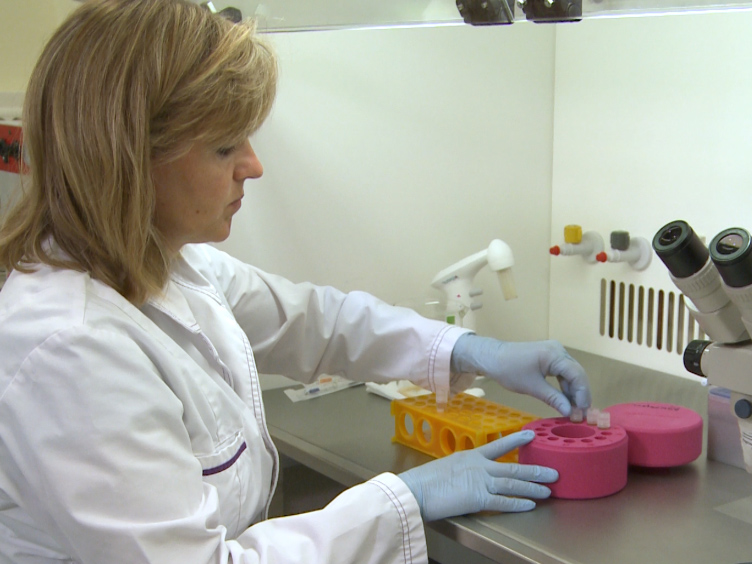