Electrochemotherapy (ECT) is the combination of transient pore formation following electric pulse application with the administration of cytotoxic drugs, which enhances the cytotoxic effect of the applied agent due to membrane changes. In vitro 3D culture systems simulate the in vivo tumor growth and preserve the biological characteristics of tumors more accurately than conventional monolayer cell cultures. We describe a protocol for the development of 3D tumor organoids using conjunctival melanoma (CM) and uveal melanoma (UM) cell lines as well as the use of hand-held customized electrodes, suitable for in vitro ECT in the culture well without destruction of the tumor environment. This protocol analyzes the culture and growth of 3D CM and UM spheroids and their reaction to bleomycin (2.5 µg/mL) alone, electroporation (EP) (750 Volts/cm, 8 pulses, 100 µs, 5 Hz) alone, and ECT as a combination of EP and bleomycin. The drug concentration and the EP settings used in this protocol were established as preferred ECT conditions according to previous experiments. The assay used to determine the spheroid viability was conducted 3-7 days following treatment. The effect on viability and growth of the 3D tumor spheroids was significant only after ECT. The customized electrodes are described in detail in order to facilitate the application of pulses in the culture well. This novel treatment of 3D UM and CM spheroids sets a steppingstone for future clinical application.

Uveal melanoma (UM) is the most common primary intraocular tumor in adults, whereas conjunctival melanoma (CM) represents 2% of all ocular melanomas1,2,3,4,5,6. Brachytherapy, proton beam radiotherapy, and phototherapy are the first line treatments in UM, whereas enucleation of the globe may be necessary1,2,3. The treatment of CM varies between ocular oncology centers; excisional biopsy followed by local chemotherapy and/or radiation therapy is the most frequent treatment approach4. Despite treatment, CM is associated with a mortality of 25%–30%5.

There is a paucity of literature on the formation of CM and UM spheroids and the application of ECT in ocular melanoma6,7,8. Tumor spheroids have better biological features than conventional 2D cell cultures and have been proposed as a useful tool to mimic the in vivo tumor environment9. Electrochemotherapy (ECT) combines the use of non-permeable cytotoxic drugs with electroporation (EP)10. EP is the local application of short and intense electric pulses that transiently permeabilizes cells for a localized increase of anti-cancer drug uptake in cancer cells and results in increased cell death11. This study establishes a protocol describing the development of CM and UM spheroids and investigates the results following ECT with bleomycin. This protocol could assist investigators in the field of ocular oncology using other therapeutic modalities on spheroids or study further effects of ECT. Due to the limited use of ECT in ophthalmology, there is little knowledge regarding the effect and process of this modality; thus, this experiment may widen the spectrum of treatment options in the future. We propose a novel customized hand-held plate electrode setting, which allows the ECT of the spheroid in the culture wells without any destruction of the tumor environment.

2. Electrochemotherapy of the tumor spheroids

The experiments were conducted with customized hand-held electrodes, which are composed of high-grade stainless steel. The thickness of the electrodes is 1 mm, the width is 4 mm, the gap between the two electrodes is 4 mm and the length of each electrode is 8 mm (Figure 1). EP and bleomycin alone have no significant effect on the viability and growth of both UM and CM tumor spheroids. ECT shows a significant reduction in tumor viability and in spheroid size. Loss of spheroid architecture with deconstructed cell fragments around the spheroids and necrosis on the central and peripheral region of all tested spheroids were observed following ECT with bleomycin. Figure 2 shows the results of the CM2005.1 cell lines. Metastatic UM cell lines showed a higher response compared to primary cell lines following ECT8. 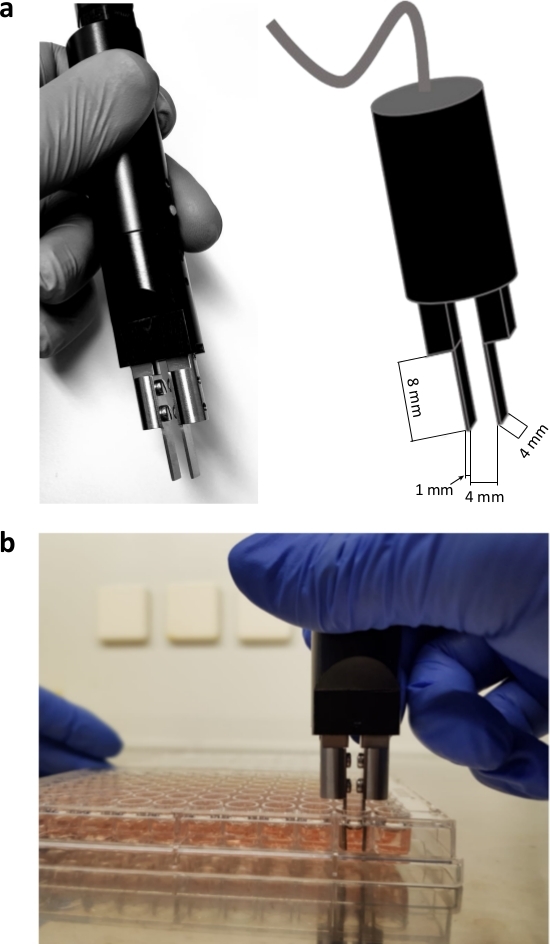 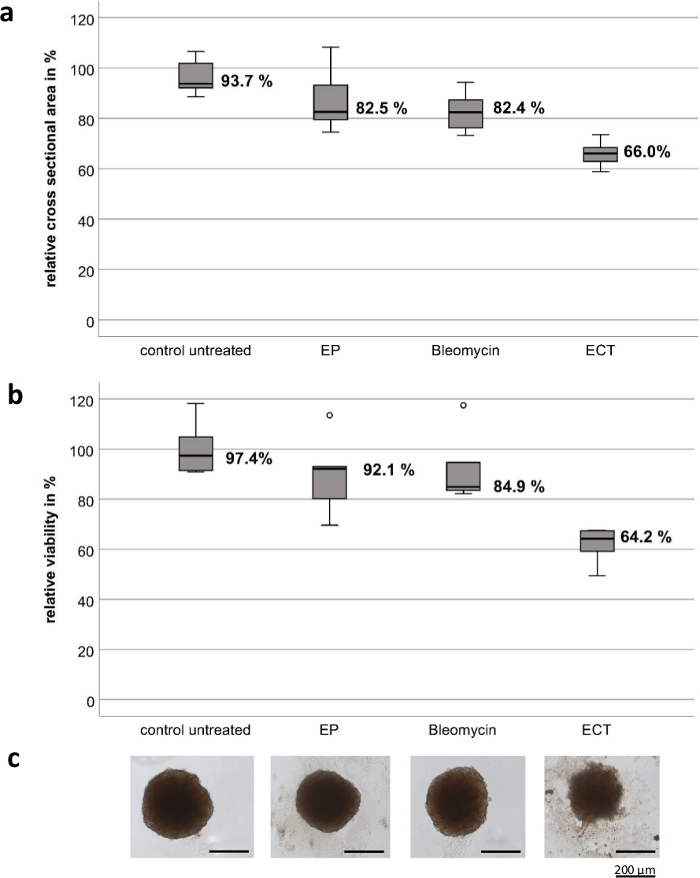 Figure 2: Cytotoxic effect of electrochemotherapy on tumor spheroids of the conjunctival melanoma cell line CM2005.1. Electrochemotherapy (ECT, 750 V/cm after application of 2.5 µg/mL bleomycin) caused stronger cytotoxic effects in spheroids compared to electroporation (EP) alone or chemotherapy using bleomycin (2.5 g/mL) alone. The cytotoxic effect was measured by calculating both the cross-sectional area and a viability assay as a percentage of the untreated control seven days after treatment. Box plots show the mean cross-sectional area of spheroids (a); the mean viability of spheroids (b); representative images of spheroids, scale bar = 200 µm (c). Please click here to view a larger version of this figure.

EP is used in various biotechnological and clinical applications12. New technological developments, such as specially designed electrodes with high specificity for every target cell and site, may help ECT target tissue anywhere in the body12. The design and position of the electrodes must allow complete tumor accessibility and ensure that healthy tissue is only minimally affected or not damaged from the treatment13.

Previous publications showed the effect of ECT in human melanoma cell suspensions in vitro7,8. The literature referring to the application of ECT in 3D ocular cell models or other similar in vivo environments, enabling a safer therapeutic utilization, is limited. Brun et al. postulate that the 3D cells in the scaffold during the morphological analysis have a round shape different from the elongated shape shown in the 2D cultures but extremely similar to the cells from biopsies of patients9. The refinement of therapy settings and instruments used in 3D cultures may lead to an optimization of ECT parameters, allowing a more accurate clinical approach9.

We describe a technological development regarding new electrodes for the application of ECT in 3D cell cultures. Bleomycin is the most commonly administered cytotoxic agent in combination with ECT11. Previous studies of our group showed that the applied EP settings (750 Volts/cm, 8 pulses, 100 ms, 5 Hz) were suitable for treatment of ocular tumors in vitro. Critical steps of the technique include the short time needed to perform the ECT while the spheroid is sinking after mobilization as well as the precise dimension of the electrodes. The necessity for the customized electrodes was due to difficulties in performing ECT in the wells with the available instruments. Unpublished data from our group showed increased spheroid damage when transferring the spheroids into a bigger well or into a cuvette to prepare them for treatment and then back to the culture well. An advantage of the described technique is the lack of spheroid manipulation to perform the treatment, because the organoids are not transferred into bigger plates or wells. Therefore, all spheroids retain their form. Another advantage is the use of more robust 3D viability assays to determine cytotoxicity of ECT compared to standard viability assays, such as the MTT assay. Thereby, all cells of the spheroid are lysed and additional cell washing, removal of medium and multiple pipetting steps are required.

Limitations of the described methods are the short lifespan of spheroids, which affects the size of the tumor as well as the cell necrosis, as seen in the center of the tumor organoid. The associated high mortality rate in both CM and UM and the limited therapeutic options require the enrichment of the existing therapeutic possibilities. ECT may offer an adjuvant modality for the improvement of the patient’s quality of life and prolong the patient’s survival. These in vitro conditions imitate an in vivo setting with higher precision, offering promising results for further human application. Future studies using spheroids prepared from primary cultures can deliver more representative results for optimization of ECT settings for a targeted treatment.

This report received no specific grant from any funding agency in the public, commercial or not-for-profit sectors.