The use of in vitro maturation (IVM) before gynecological operation (OP-IVM) is an extension of conventional IVM that combines IVM following oocyte retrieval with routine gynecological surgery. OP-IVM is suitable for patients undergoing benign gynecological surgery who have the need for fertility preservation (FP) or infertility treatments such as in vitro fertilization and embryo transfer (IVF-ET). In the operating room, patients undergoing benign gynecological surgery are first anesthetized and receive ultrasound-guided immature follicle aspiration (IMFA) treatment. As the subsequent gynecological surgery is performed, the cumulus-oocyte complexes (COCs) are examined, and the immature COCs are transferred into the IVM medium and cultured for 28-32 hours in the IVF laboratory. After assessment, mature oocytes in the MII stage will be selected and cryopreserved in liquid nitrogen for FP or fertilized by intracytoplasmic sperm injection (ICSI) for IVF-ET. By combining IVM with gynecological surgery, immature oocytes that would have been discarded can be saved and used for assisted reproductive technology (ART). The procedure, significance and critical aspects of OP-IVM are described in this article.

IVM is an ART in which human immature oocytes are cultured in vitro to maturation for IVF-ET or FP. In IVM, ovulation induction medications are not used, thus reducing pain, financial burden, and complications such as ovarian hyperstimulation syndrome (OHSS)1,2. In addition, IVM is particularly suitable for the FP of cancer patients and the infertility treatment of hormone-sensitive patients who may be unable to or have no time to receive ovulation induction therapy3. Therefore, although the number of oocytes retrieved, clinical pregnancy rate (CPR), and live birth rate (LBR) are lower than those of IVF4,5, IVM has its own unique advantages.

Infertile patients with endometrial lesions, hydrosalpinx, or ovarian cysts usually have gynecological surgery before ART treatment, and their oocytes are usually immature. OP-IVM uses guided transvaginal ultrasound to retrieve the immature oocytes and grow them in vitro until maturation for IVF-ET or FP. OP-IVM combines IVM after oocyte retrieval and gynecological surgery, thereby reducing complications that are common in controlled ovarian hyperstimulation cycles and saving time and money. For fertile patients, OP-IVM could serve as a "fertility insurance" while undergoing routine gynecological surgery.

A previous study has shown that the additional procedure of oocyte retrieval would neither increase surgical complications and adverse pregnancy outcomes, nor prolong the hospital stay8. Some patients have given live birth through OP-IVM8, indicating the feasibility of this method. This paper describes characteristics of patients who may benefit from OP-IVM as well as procedures and critical points of OP-IVM and discusses the evaluation of human oocyte maturity.

NOTE: Studies related to the OP-IVM method have been approved by the institutional review board (IRB) of Peking University Third Hospital and the Ethics Committee of Peking University (2014S2004). A summary of OP-IVM is shown in Figure 1. The step-by-step procedure will be introduced in the following section.

1. Introduction of OP-IVM to appropriate patients

4. Administer anesthesia in an operating room

NOTE: Perform the whole process of IVM on a 37 °C homothermal flat.

Until December 2019, OP-IVM was used for fertility preservation of 274 patients. Embryological and reproductive outcomes of 158 patients between 2014 to 2016 were published in a previous paper8. The following example discusses the procedure followed for a PCOS patient receiving OP-IVM in 2016. The patient is a 28-year-old diagnosed with primary infertility, left adnexal cyst, and PCOS. She received laparoscopic cystectomy and OP-IVM on September 28th, 2016; 27 immature COCs were obtained. After a 28 h culture, 7 oocytes in the MII stage were selected and fertilized by ICSI. The number of good-quality 2 pro-nuclei (2PNs) on day 1 and embryos on day 3, and day 5 were 6, 6, and 2, respectively. The blastocysts obtained on day 5 (October 4th, 2016) were frozen. On February 14th, 2017, one blastocyst was thawed. This thawed blastula was alive and transferred into the uterus on February 14th, 2017. Results of a blood human chorionic gonadotropin (hCG) test were positive, and ultrasonography showed intrauterine early pregnancy. The patient delivered a healthy girl by cesarean section at 40 weeks on November 2nd, 2017. 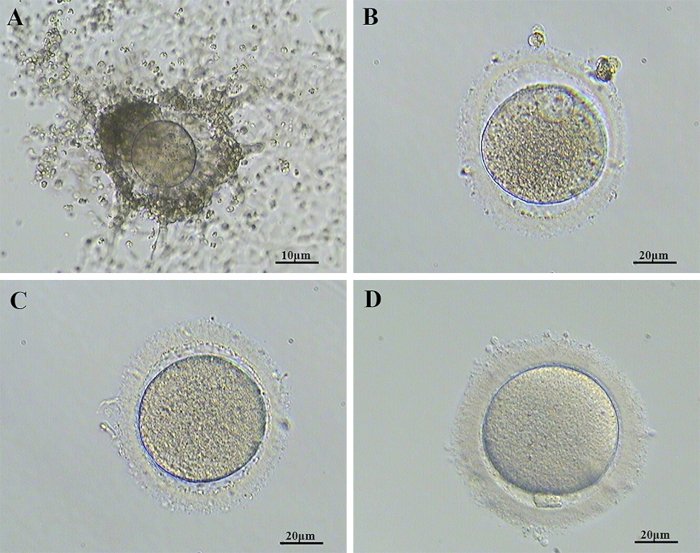 The OP-IVM method described in this article extends to conventional IVM applications and combines IVM after oocyte retrieval with routine gynecological surgery. Oocytes that would have been lost in the gynecological surgery can now be used for IVF-ET or FP without additional surgical risks. OP-IVM was first used to retrieve oocytes before ovarian drilling in PCOS patients. Its application soon expanded to infertile patients who need benign gynecological surgery and cancer or hematological disease patients who need chemoradiotherapy. Because of the potential risk of metastasis, OP-IVM is not suitable or recommended for patients with malignant tumors. Based on OP-IVM, a new Chinese mode of egg bank for the FP of infertile patients and cancer patients has been established at this institution.

For OP-IVM, both the urgency of gynecological surgery and the potential of obtaining a higher number of oocytes should be considered. In general, IVM outcome is positively correlated with the number of immature oocytes obtained during oocyte retrieval9. Dominant follicles may inhibit the growth of surrounding smaller follicles and cause atresia10, resulting in a reduced number of retrieved immature oocytes. Therefore, if the gynecological surgery is not urgent, the best window for OP-IVM is when a greater number of small follicles with few dominant follicles are observed by B-mode ultrasonography. In addition, anti-Mullerian hormone (AMH) can be used as a parameter to predict ovarian reserve as the numbers of retrieved oocytes are significantly positively correlated with AMH11,12. In cases where gynecological operation has been prioritized, as many immature oocytes should be retrieved as much as possible. In emergency operations, oocyte retrieval and IVM should be carefully evaluated based on the patient's condition and will.

IMFA under transvaginal ultrasound guidance is a method used to retrieve oocytes that can reduce damage to ovarian function13,14. Laparoscopic ovarian puncture to aspirate immature oocytes is also used in some studies15. However, compared with laparoscopy, IMFA under transvaginal ultrasound takes up less time, is less invasive, is easier to perform16,17, and can achieve more targeted follicle aspiration. Therefore, to minimize the impact on ovarian reserve and increase aspiration accuracy, IMFA under transvaginal ultrasound guidance is recommended as a better method for oocyte retrieval in OP-IVM. However, ICSI is recommended for fertilization. Previous studies have shown that the zona pellucida will harden after being cultured in vitro for long periods, resulting in a reduced rate of successful fertilization18. ICSI has been shown to effectively improve the fertilization rate of IVM oocytes in natural cycles19,20. Although recent studies have shown similar fertilization rates for ICSI and IVF21,22, ICSI holds the advantage of using natural cycles instead of ovarian stimulation. Collected embryos are frozen because of unprepared endometrium, and embryo transfer can be performed later according to the standard procedure at each center.

The purpose of ART is to treat infertility and deliver healthy babies. Previous research about the reproductive outcomes of OP-IVM showed that the numbers of retrieved oocytes and oocyte maturation rates are comparable with those observed for conventional IVM cycles using FSH and hCG. However, OP-IVM has a lower CPR and a lower LBR than conventional IVM8,23,24,25. This may be explained by constrained oocyte maturation due to the poor development potential of immature oocytes in natural cycles. However, hormone stimulation is not an option for some patients who are unable to or who do not have the time to receive the treatment. In addition, vitrification may damage the oocytes' developmental potential, resulting in low CPRs and LBRs26,27.

Moreover, gonadotropins may enlarge the ovaries and increase the risk of bleeding during oocyte retrieval, adversely affecting the exposure of operative fields in laparoscopy. The LBR of the OP-IVM method is relatively low. More studies are needed to examine the best operative timing and modify the IVM culture system to improve OP-IVM outcomes. Overall, OP-IVM combines IVM with gynecological surgery so that immature oocytes that would have been damaged or discarded can be saved and used for ART. OP-IVM has the advantages of avoiding complications caused by ovarian stimulating medications and reducing the number of operations for infertility treatment. Therefore, OP-IVM should be considered as a potentially valuable treatment method for certain patients and studied more in depth to better understand its effects and outcomes.