Dynamic nuclear polarization (DNP) can dramatically increase the sensitivity of magic angle spinning (MAS) nuclear magnetic resonance (NMR) spectroscopy. These sensitivity gains increase as temperatures decrease and are large enough to enable the study of molecules at very low concentrations at the operating temperatures (~100 K) of most commercial DNP-equipped NMR spectrometers. This leads to the possibility of in-cell structural biology on cryopreserved cells for macromolecules at their endogenous levels in their native environments. However, the freezing rates required for cellular cryopreservation are exceeded during typical sample handling for DNP MAS NMR and this results in loss of cellular integrity and viability. This article describes a detailed protocol for the preparation and cryogenic transfer of a frozen sample of mammalian cells into a MAS NMR spectrometer.

The introduction of dynamic nuclear polarization for magic angle spinning nuclear magnetic resonance spectroscopy can increase the sensitivity of MAS NMR by several orders of magnitude. This has enabled detection of biomolecules at or near their physiological concentrations. DNP can and does provide the sensitivity required to detect an isotopically labeled protein at endogenous (~1 µM) concentrations in complex biological environment1. Because there are well-established protocols to introduce isotopically labeled molecules into unlabeled mammalian cells without affecting their viability, this opens the possibility of studying isotopically enriched biomolecules at their endogenous levels in their native environment. Moreover, because DNP enhancements are more efficient at lower temperatures2,3,4, the experimental temperatures for DNP MAS NMR align neatly with those required for long-term storage of viable mammalian cells5. However, the conventional method of transferring a sample into a DNP MAS NMR spectrometer subjects it to temperature fluctuation rates that rupture mammalian cells.

MAS NMR experiments require that the sample be rotated about the magic angle at frequencies equal to or greater than the magnitude of the anisotropic interaction for it to be averaged to zero, typically at least 4 kHz and often much higher6,7,8,9. Samples are, therefore, packed into rotors that have a finned tip that is used to drive the rotation of the rotor by a stream of gas and have a mark at the other end so the rotation frequency can be monitored by a tachometer. Sample transfer for most MAS NMR instruments is accomplished by injecting the rotor from the exterior of the instrument into the stator at the end of the NMR probe with a stream of dry air or nitrogen gas. After the rotor reaches the stator, which holds the rotor at the magic angle, sample rotation is propelled by an air turbine mechanism. Separate streams of gas support, propel and control the temperature of the rotor. Inserting a rotor into the NMR spectrometer and achieving stable MAS spinning requires finely machined drive tips and tight control of the temperature and pressure of the separate streams of gas. Despite these technical demands, insertion and achieving stable MAS are largely automated for commercial MAS NMR probes for room-temperature applications.

Mammalian cells can retain their integrity through a freeze-thaw cycle if the cooling is slow5,10,11,12, at a rate equal or slower than 1 °C/min. Alternatively cells also retain their integrity if the cooling rate is ultra-fast13,14,15, at a rate faster than 104 °C/min. Rates intermediate to these two extremes rupture and kill mammalian cells due to ice crystal formation both inside and outside the cells, even in the presence of cryoprotective agents16. The sample cooling rates for a room temperature rotor inside a pre-cooled probe fall between these two extremes, thus to study cryogenically preserved intact viable mammalian cells, samples must be frozen before transfer into the instrument and transferred into the instrument without temperature fluctuations that could damage the sample or accumulation of frost on the rotor that could prevent the rotor from spinning. The protocol describes a method for frost-free, pre-cooled rotor insertion into a cryogenic MAS NMR system for the study of cryogenically preserved intact viable mammalian cell samples. The cryogenic sample transfer described here was developed for NMR characterization of viable intact cells. However, it is applicable to any system where temperature fluctuations may compromise sample integrity. This includes any variety of complex systems, such as freeze quenched reactions for chemical and structural characterization of trapped reaction intermediates17,18, enzymology19,20 or protein folding21,22.

1. Culture and cryoprotection of mammalian cells

2. Cryopreservation of mammalian cells in an NMR rotor

3. Cryogenic transfer of a frozen sample into the NMR spectrometer

4. Cryogenic removal of the sample from the NMR spectrometer

Cryogenic insertion of pre-frozen samples of mammalian cells into the NMR spectrometer supports viability throughout the NMR experiment. Schematics of cryogenic transfer of a frozen sample into a pre-cooled NMR probe is shown in Figure 1. Cellular viability and intactness can be assessed using a variety of methods. Here we used a standard dye-based measure of membrane integrity, which aligns well with other methods23. Intact cells are impermeable to trypan blue while cells with compromised membrane integrity are permeable. The number of trypan blue permeable and impermeable cells can be rapidly assessed using an automated cell counter. Using the protocol described here, the trypan blue permeability of mammalian cells after MAS NMR (i.e., at point 5.2.3) is similar to the trypan blue permeability of mammalian cells before any temperature change (i.e., point 2.1.3). However, if cells are slow frozen, then warmed to room temperature before insertion (i.e. following the protocol to point 3 before warming the rotor to room temperature before inserting into the chilled probe), cellular viability as assessed by trypan blue decreases to less than 10% of cells (Figure 2). Thus, freezing cells inside the spectrometer results in the loss of cellular membrane integrity while cryogenic insertion of frozen samples of mammalian cells supports cell viability throughout the NMR experiment. 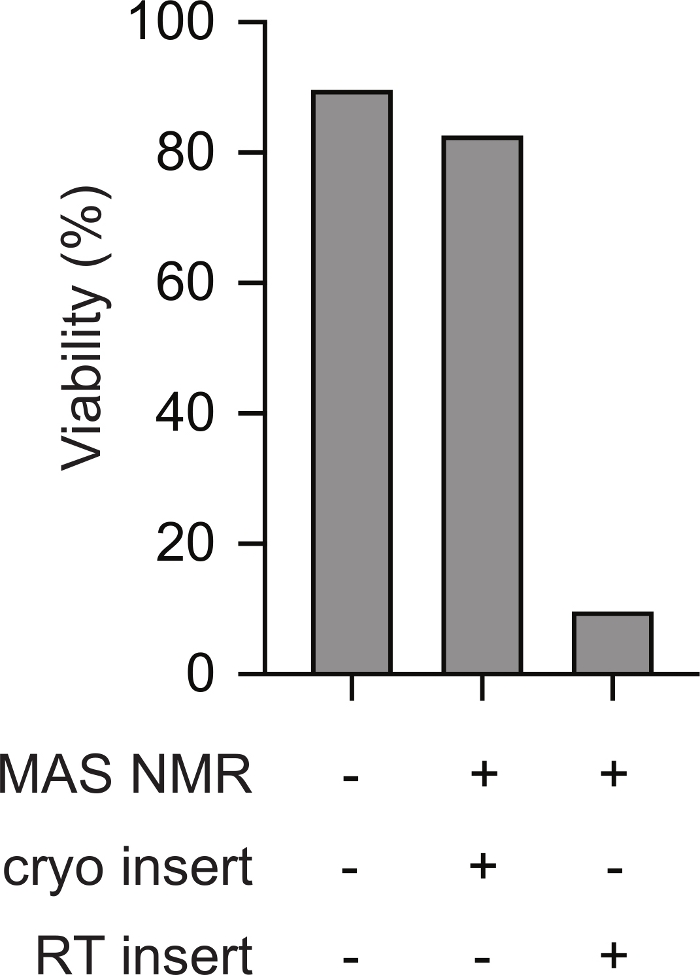 Figure 2: Cryogenic insertion of a pre-frozen sample of mammalian cells results in measurements of cellular intactness that are similar to mammalian cells samples that have never been frozen. The percentage of trypan blue impermeable cells for samples that have never been frozen (e.g. step 2.1.3) is similar to that of cells for samples after MAS NMR (e.g. step 5.2.3 with 12 kHz MAS). Slow frozen cells (e.g. step 3) that were warmed to room temperature before insertion into the NMR instrument that had been pre-cooled to 100 K had much lower percentages of intact cells after MAS NMR with 12 kHz MAS. Please click here to view a larger version of this figure.

The cryogenic transfer of frozen samples into an NMR spectrometer is successful in preserving the viability of frozen mammalian cells through the NMR data acquisition. The success of this methodology is demonstrated in pre and post MAS NMR viability measurements. This approach is successful and generalizable to any system where temperature fluctuations may compromise sample integrity. The currently presented protocol is performed with the HEK 293 cell line. Because cryopreservation conditions for many mammalian cell lines are very similar, it is likely that the conditions reported here are translatable to other cellular systems; however, they may require further optimization of cryoprotectants, sample volumes, and freezing rates to attain the same results.

This methodology can be improved upon by unpacking the rotor faster post NMR experiment. This step is currently sub optimal and its execution affects the viability of the cells. Before the cells can be resuspended in media, the drive tip and silicon plug must be removed from the rotor. The sample thaws unevenly when the rotor is held during removal of the drive tip and the silicon plug so shorter rotor handling times result in higher viabilities. The development of rotor holders or other tools to facilitate uniform thawing and quick removal of the drive tip and the silicon plug would aid in making the post-NMR assessment of viability more accurate.

The approach to cryogenic sample loading described in this article is limited to NMR probes that support sample insertion and ejection with the probe in place in the bore of the NMR magnet. While external sample insertion and ejection is standard for commercial DNP systems, custom probes do not always have this option. Also, this approach to cryogenic sample loading may require some modification for NMR probes built to be compatible with different sized rotors. This protocol has been optimized for 3.2 mm rotors and may require modification if the outer diameter of the sample catcher exceeds the inner diameter of a microcentrifuge tube (e.g., step 3.4.2).

With the application of DNP to MAS NMR, it is now possible to detect proteins and other biomolecules at endogenous physiological concentrations24,25,26. This opens the possibility of studying biomolecules within their native environments. Maintenance of cellular integrity and viability throughout the experiment is likely to be critical in connecting the experimental outcomes of the spectroscopy to biological phenomena. Uncontrolled freezing of samples containing purified proteins or cellular lysates does not typically compromise sample quality7,27, although there are some indications that freezing rate may be an important variable even in purified systems28. However, samples of mammalian cells need to be frozen at controlled rate if preserving cellular intactness and viability is important for the interpretation. Here we present a protocol for freezing and transferring frozen samples of mammalian cells into a pre-cooled DNP MAS NMR instrument that avoids potentially damaging temperature fluctuations and supports measurement on viable cells.

This work was supported by grants from the Cancer Research Prevention & Research Institute of Texas [RR150076], the National Science Foundation [1751174]; the National Institutes of Health [NS-111236], the Welch Foundation [1-1923-20170325]; the Lupe Murchison Foundation, the Ted Nash Long Life Foundation and the Kinship Foundation (Searle Scholars Program) to K.K.F.