Cancer stem cells (CSCs) reside in a supportive niche, constituting a microenvironment comprised of adjacent stromal cells, vessels, and extracellular matrix. The ability of CSCs to participate in the development of endothelium constitutes an important characteristic that directly contributes to the general understanding of the mechanisms of tumorigenesis and tumor metastasis. The purpose of this work is to establish a reproducible methodology to investigate the tumor-initiation capability of ovarian cancer stem cells (OCSCs). Herein, we examined the neovascularization mechanism between endothelial cells and OCSCs along with the morphological changes of endothelial cells using the in vitro co-culture model NICO-1. This protocol allows visualization of the neovascularization step surrounding the OCSCs in a time course manner. The technique can provide insight regarding the angiogenetic properties of OCSCs in tumor metastasis.

Ovarian cancer is the eighth most common malignancy in women worldwide, with approximately 300,000 new diagnoses and an estimated 180,000 deaths annually1. At initial diagnosis, ovarian cancer often presents with severe symptoms, with about 75% of patients already at stage III-IV. Accordingly, the 5-year survival rate is <30% and the mortality rate is the highest among gynecological cancers2, with the efficiency of treatment for ovarian cancer being highly dependent on clinical factors such as the successful accomplishment of debulking surgery, resistance to chemotherapy, and recurrence after the initial therapy.

Ovarian cancer tissues are hierarchically organized, with not all tumor components being equally capable of generating descendants. The only cells able to self-renew and produce a heterogeneous tumor cell population are considered to represent cancer stem cells (CSCs)3. CSC self-renewal and tumor initiation are accompanied by the promotion of angiogenesis to remodel their tumor microenvironment for the purpose of maintaining a supportive niche. However, previous models could not be utilized for in vitro analyses because of the limited reproducibility of cultivating CSCs derived from clinical samples owing to the disruption of spheroids after multiple passaging. More recently, experimental methods to cultivate CSCs from patients have been developed for several applications4,5,6,7. In particular, by exploiting the characteristic of CSCs to grow by forming spheroids in ultra-low attachment plates with serum-free medium, the cultivated CSCs are induced to express a stem-cell surface marker that is not expressed in normal tumor cells with multilineage differentiation potential8,9.

Recent data have shown that the persistence of dormant ovarian (O)CSCs visualized as dissemination at the peritoneum is associated with their regeneration as recurrent tumors10. Understanding the molecular and biological features of OCSCs may thus allow for effective targeting and eradication of these cells, resulting in potential tumor remission. In particular, little is known regarding the cellular and molecular mechanistic features of CSCs roles in angiogenesis11. Therefore, in the present protocol we used patient-derived OCSCs in an in vitro setting to investigate the angiogenic property of endothelial cells using the co-culture model, which may mimic the tumor microenvironment of CSCs and endothelial cells at the metastatic site in the clinical setting. Ultimately, as neovascularization constitutes a critical process necessary to support tumor growth and metastasis, a better understanding of its mechanism will allow the development of a novel targeting therapy for OCSCs at the metastatic site.

Here, we present a protocol to visualize the neovascularization step surrounding the CSCs in a time course manner. The advantage of the protocol includes allowing fully reproducible investigations using the 3D co-culture system, NICO-1, thereby permitting observation of the effects on patients of the OCSC-derived tumor-initiation capability during endothelial cell angiogenesis.

4. Seeding HUEhT-1 Cells and CSCs onto the NICO-1 system

We collected ascites fluids obtained from patients with advanced ovarian cancer during surgery or paracentesis for the purpose of performing a long-term stable culture for spheroids. Here, we present cases of a long-term spheroid culture of ovarian CSCs termed CSC1 and CSC2. Both cell lines carry the same diagnosis and histological profiles. The mechanistic roles of OCSCs underlying the interaction with endothelial cells necessary to induce the neovascularization of endothelial cells surrounding the OCSCs remain unknown. Therefore, we aimed to clarify the processes of the CSC vascular niche development at the metastatic sites. We examined the interaction between endothelial cells (HUEhT-1) and OCSCs using the in vitro coculture model NICO-1. Figure 1 shows a comparison of tube formation activity induced by CSC1 and CSC2. The number of formed vascular tubes dramatically increased over time in the coculture with CSC2 (Figure 2A). For the positive control, we present Figure 2B which shows the angiogenic property of HuEhT-1 after the treatment of VEGF (10 ng/mL) without co-culture of CSC2. We are now clarifying the detailed mechanism underlying the result. Figure 3 shows representative images of coculture model of OCSC with endothelial cells using the NICO-1. HUEhT-1 cells were cocultured with CSC2 for 20 hours, and the time-lapse video image was captured. Figure 3A shows the phenotype of CSC2 before and after coculture for 20 hours. Figure 3B shows HUEhT-1 cells cocultured at the same time. It is noteworthy that HUEhT-1 cells formed vascular tubes during the coculture with CSC2 (Figure 3C: Video clip)

Figure 1: OCSCs vascular niche model. The mechanistic roles by which OCSCs induce the tube formation (vascularization) of endothelial cells remain unknown. We examined the interaction between endothelial cells (HUEhT-1) and OCSCs using an in vitro co-culture mode, NICO-1. The right compartment of this system is composed of an insert, which holds OCSCs with the cell medium. The left compartment consists of a well containing endothelial cells and HUVECs with the same medium as in the right well. 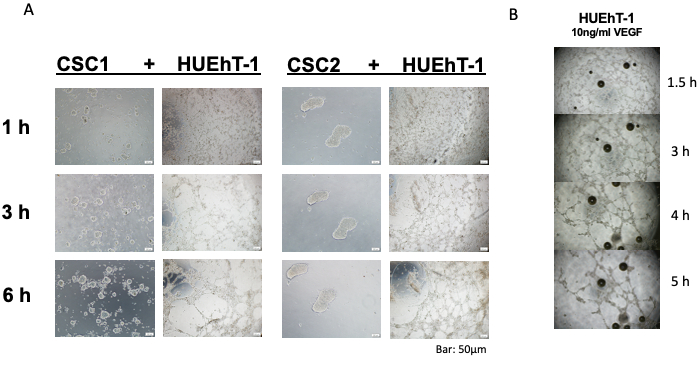 Figure 2: Comparison of the neovascularization activities induced by OCSCs. Over time, the number of formed vascular tubes dramatically increased upon coculture with CSC2. 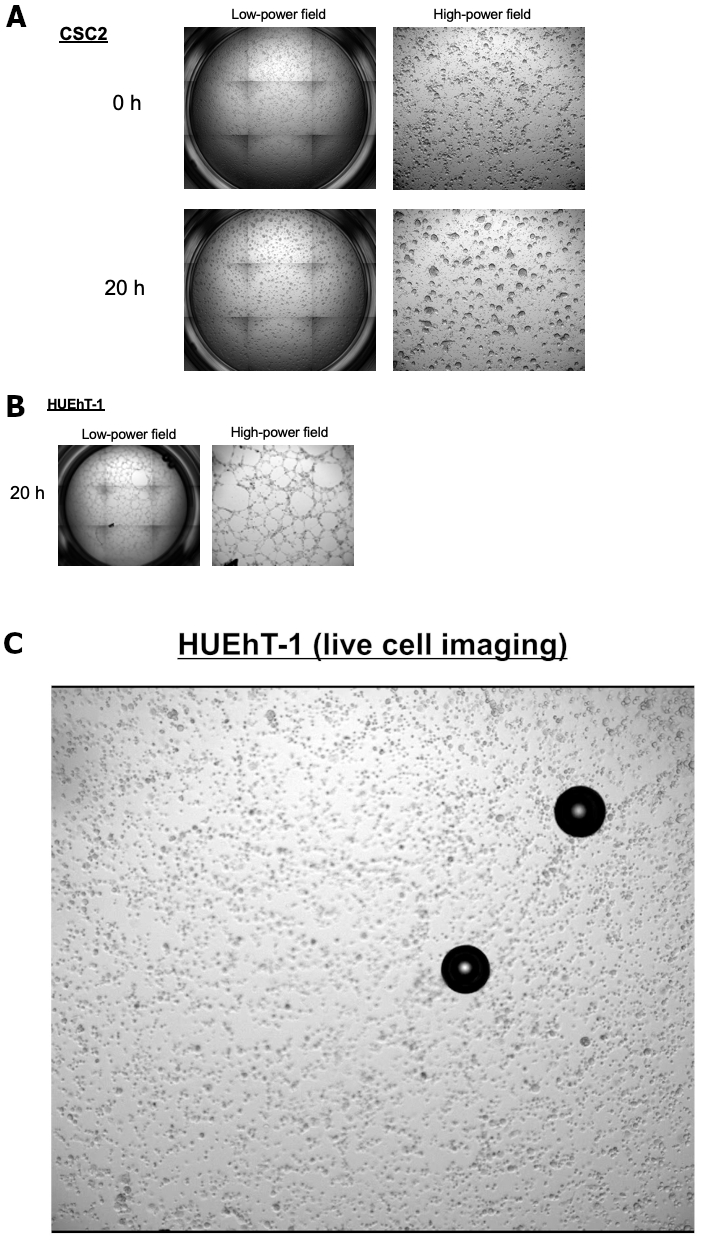 The presented protocol describes how to mimic the tumor microenvironment of OCSCs in an in vitro setting. The primary component of the method constitutes the highly reproducible coculture model obtained using the NICO-1 system, an indirect Transwell co-culture system. Many of the currently available coculture models examine the effects of direct cell-cell contact on cocultured cell populations12,13,14,15,16,17,18. The simplest model that can be used for examining the effects of co-culture may reproduce by the direct mixing of two cell types, and the extent of heterotypic and homotypic interactions can be examined by altering the seeding densities of each cell type and relative seeding ratio of the subpopulations19. However, directly determining the relative contributions of OCSCs to any observed effects of coculture independently by microscopy is difficult owing to the precise invisibility of each cell; thus, these studies are often accompanied in parallel by conditioned media experiments. For example, a segregated coculture system can be utilized in studies in which the effects of paracrine signaling on tumor microenvironment are of interest19. In comparison, in the present method we describe a model that allows simultaneous evaluation of the effects of cell-cell contact and paracrine signaling, which mimic the architecture of the native tumor microenvironment.

Angiogenesis serves as a hallmark of ovarian cancer and plays a critical role in its progression, which involves interactions between cancer cells, endothelial cells, and the surrounding tumor microenvironment20. Bevacizumab is a key molecular targeting drug that has been widely accepted for use in combination chemotherapy for advanced ovarian cancer21. Specifically, bevacizumab constitutes a monoclonal antibody against vascular endothelial growth factor (VEGF). VEGF contributes to the development of peritoneal carcinomatosis, and formation of malignant ascites in advanced ovarian or peritoneal cancer by promoting neovascularization and enhancing vascular permeability22. Therefore, VEGF inhibition has been shown to inhibit ascites production and massive tumor growth at the metastatic site. Further investigation that effectively targets VEGF-stimulated vascular endothelial cells in the tumor microenvironment level is thus warranted. However, it may be difficult to effectively utilize preclinical models, such as mouse models, for these studies. For example, it has been reported that the affinity of bevacizumab for human VEGF is high whereas that of the mouse protein is lower23. This enforces a limitation with regard to the application of bevacizumab within experiments designed to further investigate its anti-VEGF mechanism toward neovascularization in the tumor microenvironment as ascertained using mouse models. An appropriate model with well-controlled architecture is therefore needed to recapitulate the components of the in vivo tumor microenvironment. In such case, we note that our in vitro coculture model system permits the live tracking of cell behavior throughout the culture of the patient-derived OCSCs and endothelial cells and allows for the study of these individual cell subpopulations in response to coculture.

A better understanding the role of OCSCs and their vascular niche could provide new insights for developing therapeutic strategies for OCSCs. As shown in the representative experiments, the strengths of the model are that it provides a study platform that appears to be partly congruent with clinical settings, enabling the development and testing of better targeted and effective novel drugs. Further studies are needed with direct clinical replication of our results involving a more significant number of patient-derived OCSCs.

This work was supported by a Grant-in-Aid for Scientiﬁc Research C (grant no. 19K09834 to K.N.) from the Ministry of Education, Science, and Culture, Japan.