A long-term ex vitro 3D organoid culture system was established from mouse hepatocytes. These organoids can be passaged and genetically manipulated by lentivirus infection of shRNA/ectopic construction, siRNA transfection and CRISPR-Cas9 engineering.

The liver is the largest organ in mammals. It plays an important role in glucose storage, protein secretion, metabolism and detoxification. As the executor for most of the liver functions, primary hepatocytes have limited proliferating capacity. This requires the establishment of ex vivo hepatocyte expansion models for liver physiological and pathological research. Here, we isolated murine hepatocytes by two steps of collagenase perfusion and established a 3D organoid culture as the 'mini-liver' to recapitulate cell-cell interactions and physical functions. The organoids consist of heterogeneous cell populations including progenitors and mature hepatocytes. We introduce the process in detailed to isolate and culture the murine hepatocytes or fetal hepatocyte to form organoids within 2-3 weeks and show how to passage them by mechanically pipetting up and down. In addition, we will also introduce how to digest the organoids into single cells for lentivirus infection of shRNA/ectopic construction, siRNA transfection and CRISPR-Cas9 engineering. The organoids can be used for drug screens, disease modelling, and basic liver research by modeling liver biology and pathobiology.

Organoids are self-organized, three-dimensional (3D) in vitro clusters that include self-renewing stem cells and multi-lineage differentiated cells1,2. The organoids of many organs have been established either from pluripotent or adult stem cells by well-defined niche factors including the intestine, the brain, the colon, the kidney, the liver, the pancreas, the thyroid, the stomach, the skin, and the lung3,4,5,6,7. The organoids recapitulate physical cell functions by mimicking either development (originated from embryonic or induced pluripotent stem cells, PSCs) or homeostasis/regeneration progression (originated from adult stem cells, ASCs), which opens up new avenues in disease research and therapy8,9.

As the biggest organ in mammals, the liver is mainly responsible for storage, metabolism and detoxification. Two kinds of epithelial cell types, hepatocytes and cholangiocytes, construct the basic unit of a liver lobule. Hepatocytes are responsible for 70-80% of liver function10. Although the liver has remarkable regeneration capacity, rapid loss of hepatocyte features happens during traditional monolayer culturing by dysregulated cell polarization and dedifferentiation, which increases the need of researchers and clinicians to build 'gap-bridging' liver models in a dish. However, until recently the ex vivo expansion models from primary hepatocytes had not been well established11,12,13,14,15. Liver organoids can be established from embryonic/induced pluripotent stem cells, fibroblast conversion into hepatocyte-like cells, and tissue-derived cells. The development of liver organoids boosts the application of an in vitro model for drug screens and liver toxicity assays16,17.

Here, we describe a detailed protocol for establishing liver organoids from murine primary hepatocytes. By using this protocol, we set up an in vitro culture system of hepatocyte organoids with two perfusions of collagenase. These organoids can be passaged for long-term expansion for months. Their physiological function is highly consistent with hepatocytes. Furthermore, we also provide a detailed description of how to perform genetical manipulation, such as lentivirus infection, siRNA transduction, and CRISPR-Cas9 engineering using organoids. The propagation of hepatocyte organoids shed light on the possibility of using organoids to understand liver biology and develop personalized and translational medicine approaches.

All mice experiments were approved by the Animal Care and Use Committee of the School of Basic Medical Sciences at Shandong University and were carried out according to the License under Home Office guidelines and regulations (No. ECSBMSSDU2019-2-079).

The hepatocyte organoids from female Alb-Cre; Rosa26-GFP mouse (8 weeks) were observed five days after seeding (Figure 1A). The organoids are proliferating with Ki67 positive staining (Figure 1B). Interfering expression of representative genes in hepatocyte organoids either by siRNA transfection or lentivirus infection was examined by qRT-PCR and western blot. The results are shown in Figure 2A and 2B. Figure 2C shows the selection results from liver organoids after 14 days of treatment with RSL-3 and the CRISPR/Cas9 genomic library screen. The results suggest these organoids could be expanded in vitro and genetically manipulated. 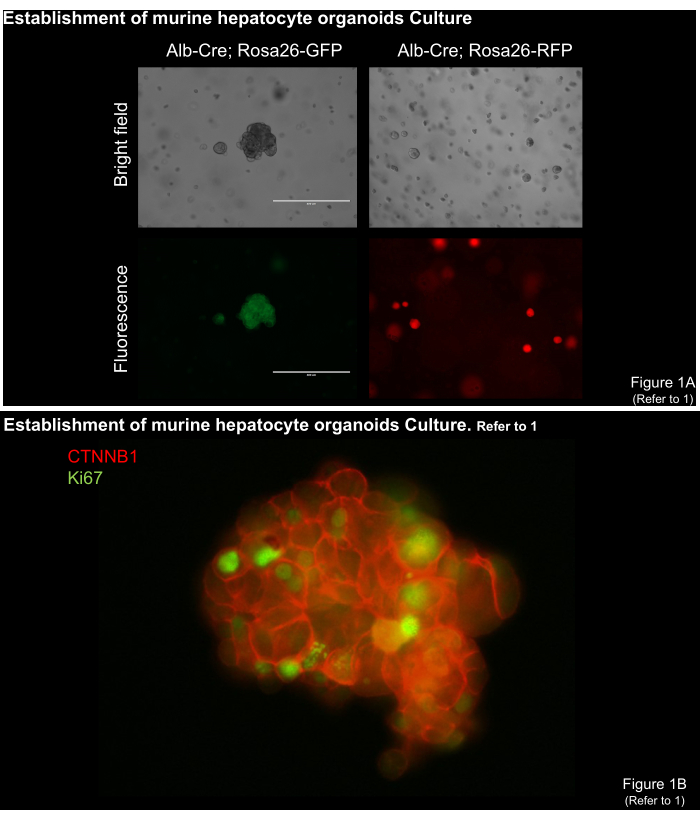 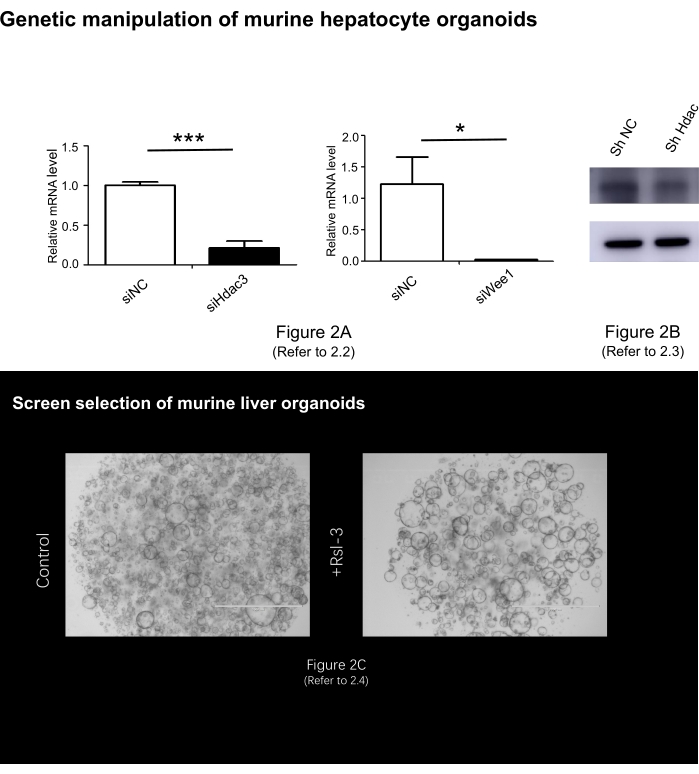 Figure 2: Genetic manipulation of murine hepatocyte organoids. (A) The mRNA level of Hdac3 and Wee1 relative to GAPDH in hepatocyte organoids after transfected with siRNA. Error bars represent standard errors (n=3). (B) Western bolt analysis of organoids infected by lentivirus. (C) Representative image of liver organoids after CRISPR-Cas9 screen in culture medium with RSL-3 selection. Please click here to view a larger version of this figure.

The ability to culture mature hepatocytes over long periods is fundamental in studying liver basic science, drug toxicology and hepatotropic host-microbiology infections such as malaria and the hepatitis viruses. With a well-defined niche, the protocol here sets up a culture system for hepatocytes. This protocol drives mature hepatocytes to expand in 3D culture with a heterogeneity that recapitulates cell-cell interaction, most hepatocyte function and genetic modifications, allowing the design of gene function studies and novel therapeutic avenues toward regenerative therapy.

High quality hepatocytes are very important for the establishment and genetic manipulation of hepatocyte organoids. The digestion time of collagenase treatment is quite critical. There remains some limitations in the method though. First, more niche factors are suggested in a trial to help the organoids expand longer. Second, the organoids do not like to be single cells consecutively and frequently. The hepatocyte-derived organoids appear to recapitulate the regenerative response of adult livers after partial hepatectomy, but they are still different from quiescent mature hepatocytes.

The authors disclose no conflicts.

We thank Professor Hans Clevers for kindly providing the cell lines to produce recombinant R-spondin1. This work was supported by the grants from the National Key R&D Program of China (2019YFA0111400), the National Natural Science Foundation of China (31970779) to H.H., and the Funds for Youth Interdisciplinary and Innovation Research Group of Shandong University (2020QNQT003) to H.H. 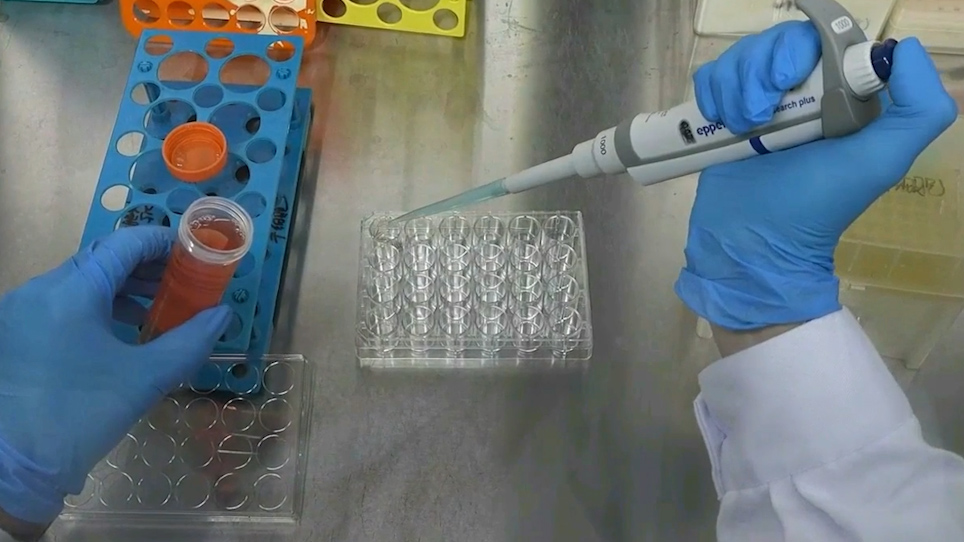