The punishment-imposed abstinence procedure models the self-imposed abstinence that humans initiate due to the adverse consequences associated with drug-taking. This model has been implemented in experiments using different types of substances of abuse such as methamphetamine, cocaine, and alcohol. However, punishment-induced abstinence in heroin-trained animals has not been demonstrated. Furthermore, acute stress is a key trigger for relapse in humans and animal models. It was previously demonstrated that acute food deprivation robustly induced reinstatement of extinguished cocaine and heroin seeking. The procedure described here can be used to assess the effects of acute stress exposure on heroin seeking after punishment-imposed abstinence. A total of 8 rats were implanted with chronic intravenous (i.v.) catheters and trained to self-administer heroin (0.1 mg/kg/infusion) for 18 days under a seek-take chained schedule. Completing the seek link gave access to the take lever, which was paired with a heroin infusion. The seek lever was programmed with a variable interval 60 schedule of reinforcement (VI60), and the take lever was programmed with a fixed-ratio 1 reinforcement schedule (FR1). Following self-administration training, a mild foot shock was delivered on 30% of the completed seek links instead of the extension of the take lever. Footshock intensity was increased by 0.1 mA per daily session from 0.2 mA to 1.0 mA. Heroin-seeking tests were performed after 24 h of food deprivation (FD) or sated conditions. Rats under acute food deprivation condition robustly increased heroin seeking after punishment-imposed abstinence.

Relapse is the most challenging problem in the treatment of drug use1,2. However, only a handful of pharmacological treatments are approved to help avoid relapse in humans3. The opioid epidemic that North America is currently facing is a striking example of it, and it demands considering different approaches on animal models of relapse to opioids.

Acute stress has been shown to be a key trigger to relapse in humans4. One environmental stressor that is often associated with drug addiction is food deprivation. Drug users often choose to allocate resources towards obtaining drugs instead of food. Caloric deficit has been shown to be correlated with higher relapse to cigarettes5 and alcohol6 use. Due to ethical and practical issues, animal models have been developed over the last decades to facilitate research in the field. In animal models, acute food deprivation has been demonstrated to robustly reinstate extinguished heroin seeking7. Currently, most animal models of relapse are based on abstinence procedures that are either not representative of human abstinence (e.g., extinction-based models) or encompass only the small percentage of drug users that are forced to abstain due to incarceration or inpatient treatment (e.g., forced abstinence models). The main reason drug users choose to abstain is the negative consequences associated with drug-seeking and taking8. Punishment-imposed abstinence is an animal model that mimics the negative consequences associated with drug-seeking on self-imposed abstinence in humans. This model introduces an aversive stimulus, e.g., a mild footshock, with drug-seeking or taking, which leads the animal to stop taking the drug voluntarily. Another procedure that incorporates negative consequences for drug-seeking is the electrical barrier conflict model for drug abstinence and relapse9. The rat must cross an electrical barrier to perform the operant behavior linked with drug self-administration. The model was used successfully to demonstrate voluntary abstinence and relapse to psychostimulant and opioid drugs10,11. However, under the electrical barrier procedure, drug-seeking efforts are always associated with an aversive event, unlike the human condition. Moreover, drug-taking itself might overlap with the electrical footshock as the animal returns to the safe area following the infusion by crossing the barrier again.

Punishment-imposed abstinence has been used with other drugs of abuse such as cocaine12, alcohol13, methamphetamine14, remifentanil15, but it was never applied to heroin-trained animals. The model has been used to study relapse induced by priming14 and drug-associated cues16, but it was not integrated into a stress-induced relapse procedure. The procedure described here is used to demonstrate acute food deprivation-induced relapse to heroin seeking after punishment-imposed abstinence in male rats.

All rats are treated according to the guidelines of the Canadian Council on Animal Care. Approval for all the experimental procedures was granted by the Concordia University Animal Research Ethics Committee.

Male rats demonstrated an increase in seek lever presses as the schedule of reinforcement increased over the training days, and a reliable, consistent number of heroin infusions over training days (Figure 1). During punishment, rats decreased the number of seek lever presses and infusions with the increase of footshock intensity over 8 punishment days (Figure 2). Food-deprivation condition significantly increased heroin seeking after punishment-imposed abstinence (Feeding condition: F(1, 7) = 7.12, p = .0.03, d = 1.3; Figure 3A). There was no statistically significant effect for time nor for drug-seeking over time across feeding conditions (Time: F(2, 14) = 1.029, p = .38; Time x Feeding condition: F(2, 14) = 1.347, p = .29; Figure 3B). 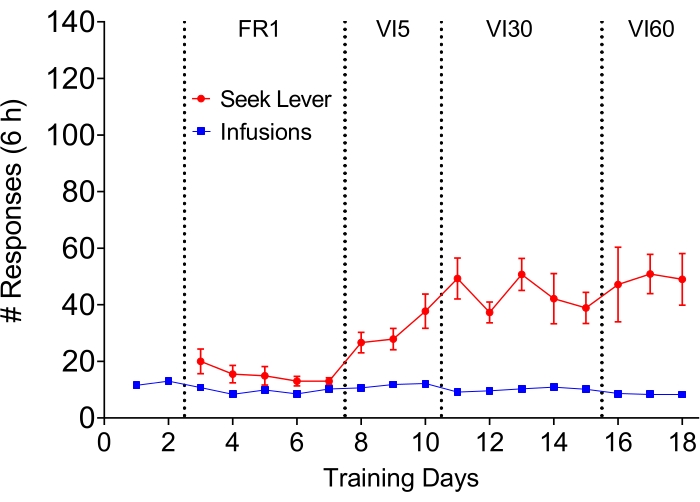 Figure 1: Heroin self-administration (N = 8). Mean ± SEM of seek lever presses (in red) and the number of infusions (blue), over a gradual increase of reinforcement schedules (FR1, VI5, VI30, VI60) for 18 training days. Please click here to view a larger version of this figure. 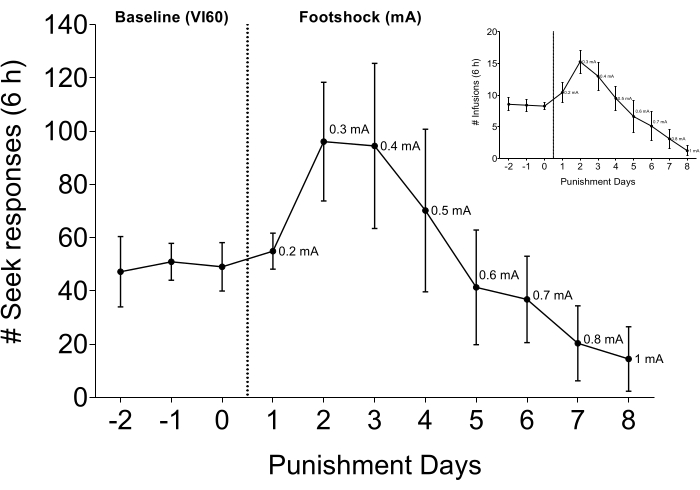 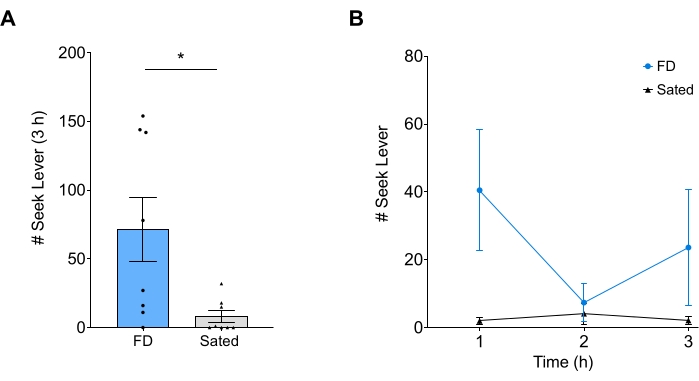 There are two important demonstrations in this paper. First, the validation of the punishment-imposed abstinence using the seek and take chain with heroin. Second, it was demonstrated that stress-induced relapse could be observed in a punishment-imposed abstinence procedure. These are important demonstrations because (i) The punishment-induced abstinence procedure more closely mimics the human condition as it results in voluntary abstinence, i.e., not due to extinction of drug-seeking or forced removal from the drug-taking environment18, (ii) A reliable relapse was demonstrated using an ecologically relevant stressor: acute food deprivation stress.

When implementing the protocol, care must be given to the proper training of the rats under the seek-take procedure that is more complex compared to the common continuous self-administration using one "active" lever. In addition, the punishment phase should be carefully adjusted to the rat strain used to prevent unnecessary pain and "over-punishment" that could result in a freezing response and would interfere with relapse tests. Note that the analgesic effects of heroin could decrease the response to footshock punishment; however, under the conditions described in this protocol, robust punishment-imposed abstinence from heroin self-administration was found. The conditions of this protocol aimed to separate as much as possible the time between a heroin infusion and the footshock (on punishment trials). To achieve this, the protocol included long inter-trial intervals (7 min) between infusion trials and foot shock trials.

In contrast to the training under the more common active/inactive levers procedures, where both drug-seeking and taking are associated with the same active lever, the seek-take chained procedure allows the examination of specific factors related to drug-seeking and drug-taking as two separate sets of actions. Only drug-seeking is punished, thus avoiding possible devaluation of the drug rewarding properties20.

One limitation of this study is the reduced drug intake under the VI60 schedule compared to studies using FR1. In addition, long inter-trial intervals of 7 min also reduce the available time during the session to access the drug. One option to overcome these limitations in the future would be to reduce the inter-trial interval or increase the session length. Another limitation of the model is the pairing physical stress (footshock) to drug-seeking, while human drug users mostly experience psychological stress. Yet, under the probabilistic introduction of the punishment, as set in the procedure, drug-seeking is attenuated by fear of the possible consequences, which can be perceived as a psychological stressor. The conditions in the protocol described here set up a motivational conflict that is experienced at every trial during the punishment phase and are central to the decision process in addiction21.

Relapse to heroin can occur even after a prolonged abstinence period22. Future studies should investigate the effect of exposure to food deprivation stress after longer punishment-imposed abstinence periods. Moreover, this paper was focused on the demonstration of relapse and not the study of individual differences in response to punishment ("punishment-resistant" and "punishment sensitive"23). Footshock intensity was, therefore, increased until 1.0 mA to guarantee that all rats achieved voluntary abstinence. It would be interesting to explore the development of individual differences in heroin-trained rats by keeping the footshock at lower intensities (e.g., 0.4 mA).

Here a relapse procedure is presented in which voluntary abstinence is reached due to negative consequences, and relapse is induced by an ecologically relevant environmental stressor. The food deprivation-induced relapse is robust and easily replicable. The procedure will allow a better understanding of the mechanism underlying relapse to heroin after voluntary abstinence.

This work was supported by the Natural Sciences & Engineering Council Discovery Program (US: RGPIN-2016-06694).