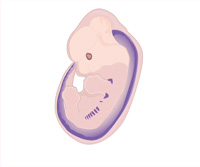 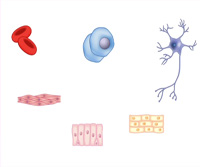 Somatic or adult stem cells, like embryonic stem cells, are capable of self-renewal but demonstrate a restricted differentiation potential. Nonetheless, these cells are crucial to homeostatic processes and play an important role in tissue repair. By studying and manipulating this cell population, scientist may be able to develop new regenerative therapies for injuries and diseases.

Generally, this renewable source of stem cells first differentiates into fate-restricted progenitor cells before ultimately giving rise to functionally specialized cells. A classic example of this is the daily physiological process called hematopoiesis. In this process, somatic stem cells found in the bone marrow form the blood and immune system progenitor cells, which further differentiate into the cells of their respective systems.

From the tissue regeneration point of view, somatic stem cells found in the skeletal muscle have been shown to paly a role in tissue repair. When a muscle is damaged, these cells are recruited to the site of injury and differentiate to replace damaged cells.

How do somatic stem cells know that it's time to get to work? When cells are damaged, they release soluble chemoattractants, such as chemokines, which recruit somatic stem cells to the site of injury. These cells may then differentiate into the target tissue cell type. In addition to providing a supply of new cells, somatic stem cells can induce local changes, such as the generation of new blood vessels that promote wound healing.

The regenerative capacity of endogenous somatic stem cells may not always be sufficient to repair diseased or damaged tissue. Therefore, scientists are investigating how the delivery of exogenous pools of somatic stem cells can be used to treat such conditions.

First, skeletal muscles are dissected from a donor mouse and digested with the help of a dissociating enzyme, for example collagenase. Next, satellite cells are isolated, and one way to do that is by incubating these cells with antibodies bound to magnetic beads, which are then purified on a magnetic column. Following purification, the satellite cells are grown in culture and subsequently differentiated into myogenic progenitor cells by adding differentiation media.

In the meantime, a recipient mouse is prepared by intramuscular injection of a toxin resulting in a muscular weakness, or muscular dystrophy. Prepared myogenic progenitor cells are then injected into the skeletal muscles of the dystrophic mouse. Ultimately, successful integration and differentiation of donor cells can be determined by immunohistochemistry. Functional amelioration of the dystrophic phenotype may be assessed with a treadmill test.

Now that you've seen how somatic stem cells can be isolated and manipulated in a tissue regeneration experiment, let's look at some of the downstream in vitro and in vivo applications of this unique class of cells.

Apart from injecting somatic stem cells into in vivo animal models, scientists are also devising ways to manipulate the fate of these cells in vitro. In this experiment, scientists differentiated stem cells into functional skeletal muscle cells by first preparing a petri dish with anchors. Stem cells were then cultured, mixed within a collagen and gel matrix, and anchored within the specially engineered petri dishes.

Then, these anchored stem cells were electrically stimulated by electrodes placed in differentiation culture media, which led to the in vitro formation of functional, mature muscle constructs. Immunofluorescence confirmed the expression of differentiated skeletal muscle cell markers: actin, in red, and myosin, in green.

Somatic stem cells have also shown promise as potential regenerative therapies for disorders of the central nervous system. In this method, scientists first harvested donor neuronal tissue from a transgenic rat fetus expressing green fluorescent protein, and isolated neuronal stem cells were treated in a fibrin matrix with a growth factor cocktail. Then, the treated neuronal stem cells were injected in the site of the spinal cord lesion of the recipient mouse. Grafted donor cells were shown to have integrated well and filled the cavities in the spinal cord lesion.

In order to better understand how somatic stem cells integrate into tissues after injecting them into a host, scientists have developed a method for fluorescently labeling them in vitro prior to injection. In this experiment, scientists harvested somatic stem cells from mouse bone marrow, and stably transfected them with different fluorescent protein genes using a viral vector systems The transduced cells were then injected into the tail vein of a recipient mouse. Over time, organs were harvested from the recipient mouse and fluorescence microscopy was used to track the location of cells in various tissues.