Previous characterizations of rodent eating behavior have revealed that they use coordinated forepaw movements to manipulate food pieces. We have extended upon this work to develop a simple quantitative measure of forepaw dexterity that is sensitive to lateralized impairments and age-dependent changes. Rodents learn skillful forepaw and digit movements to manage thin pasta pieces, which they eagerly consume. We have previously described methods for quantifying vermicelli handling in rats and showed that the measures are very sensitive to forelimb impairments resulting from unilateral ischemic lesions, middle cerebral artery occlusions and unilateral striatal dopamine depletion [Allred, R.P., Adkins, D.L., Woodlee, M.T., Husbands, L.C., Maldonado M.A., Kane, J.R., Schallert, T. & Jones, T.A. The Vermicelli Handling Test: a simple quantitative measure of dexterous forepaw function in rats. J. Neurosci. Methods 170, 229-244 (2008)]. Here we present a more detailed protocol for this test in rats and compare it with a newly developed version for mice, the Capellini Handling Test. Rats and mice are videotaped while handling short lengths of uncooked vermicelli or capellini pasta, respectively, with a camera positioned to optimize the view of paw movements. Slow motion video playback allows for the identification of forepaw adjustments, defined as any distinct removal and replacement of the paw, or of any number of digits, on the pasta piece after eating commences. Forepaw adjustments per piece are averaged over trials per each testing session. Repeated testing permits sensitive quantitative analysis of changes in forepaw dexterity over time. Protocols for pre-testing habituation and handling practice, as well as procedures for characterizing atypical handling patterns, are described. Because rats and mice perform the pasta handling tests slightly differently, species-specific differences in administration and scoring of these tests are highlighted. All animal use was in accordance with protocols approved by the University of Texas at Austin Animal Care and Use Committee.

1. Preparing for the onset of testing

The results from the video analysis should include the number of adjustments of each paw per trial and the time to eat each pasta piece. Results from rats with sensorimotor cortical lesions or cerebral ischemia indicate that animals make fewer adjustments with the impaired (contra-to-lesion) limb, an effect that endures for at least a month after the injuries. Unilateral dopamine depletion results in both a decrease in adjustments with the contralateral limb and an increase in adjustments with the ipsilateral limb (Allred et al., 2008). Results from mice show that aged animals take longer to eat the pasta pieces, and make more adjustments that do not result in advancement of the pasta into the mouth, compared to young adult mice (Tennant et al., 2009). The analysis of these tests may also include observations of atypical handling behaviors. Striatal damage and middle cerebral artery occlusion additionally resulted in increased frequency of abnormal eating behaviors (Allred et al., 2008). 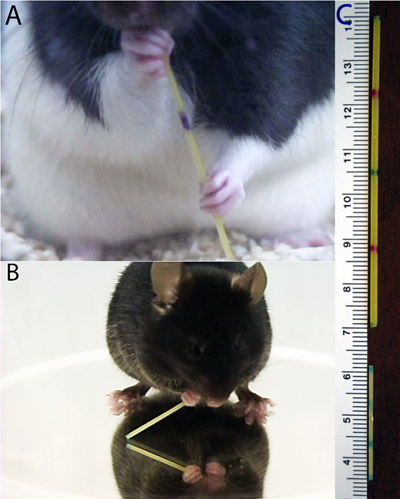 Figure 1. Pasta handling posture of (A) rats and (B) mice. Note that the rats sit back on their haunches while the mice hunch over the pasta, necessitating the placement of a mirror below the mouse in order to view paw movements. (C) Examples of pasta pieces prepared for testing. 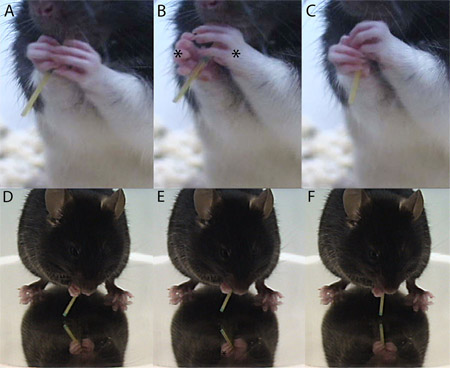 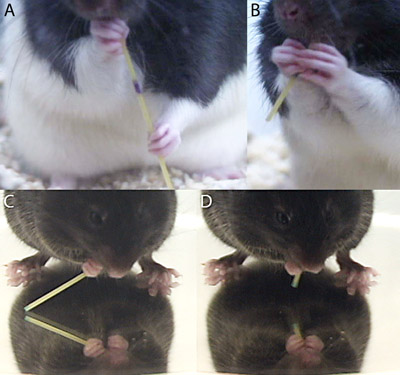 Figure 3. Guide and grasp limb positions of rats and mice when the pasta is (A,C) long and (B,D) short.

In this video, we demonstrate how The Vermicelli and Capellini Handling Tests are conducted in rats and mice, respectively. These tests are a simple, quantitative way to study paw and digit function in normal animals, after damage to motor systems of the brain, or during aging. Slow-motion video analysis of the paw and digit movements used to handle small pieces of uncooked pasta allow the researcher to quantify the adjustments made with each paw, as well as observe abnormal behaviors that may be seen following experimentally-induced CNS damage. Testing sessions can be done repeatedly on different days and most animals complete all trials of a session within a few minutes. Thus, the test is suitable for incorporation into a larger test battery or experimental design. The tests can also be used in studies of motor skill learning (Xu et al., 2009), but here we present a protocol to assay changes in an established skill over time.

Currently, skilled reaching tests are the most commonly used tests of dexterous forelimb function in rats (e.g., Whishaw et al., 1986; Ballermann et al., 2001; Montoya et al., 1991) and mice (Farr & Whishaw, 2002; Tennant & Jones, 2009; Baird et al., 2001). Reaching tests permit isolated testing of each limb, whereas pasta handling is a bimanual task. Nevertheless, the tests are similar in their sensitivity to impairments in skilled forepaw function and the acquisition of skill for both tests involves plasticity in the forelimb representation of the motor cortex (Xu et al., 2009). In our experience, the reaching tests are more complicated and laborious to perform and, for some experimental questions, the present tests may provide a more efficient alternative. However, unlike the tests described here, skilled reaching tests have been in use for decades (Peterson, 1934) and they now include a versatile set of highly sensitive measures and test parameters (Ballermann et al., 2001; Farr & Whishaw, 2002; Montoya et al., 1991; Whishaw et al., 1992). In contrast, the Vermicelli and Capellini Handling Tests extend from relatively recent characterizations of the adroit food handling behavior of rats (Whishaw and Coles, 1996). In both administration and analysis, these tests could undoubtedly be further refined and extended, e.g., to more precisely quantify fine digit and bimanual movement patterns and to quantify the coordinated movements of the tongue, mouth and jaw.

The authors would like to thank Dr. DeAnna Adkins, Dr. Marty Woodlee, Cole Husbands, Mónica A. Maldonado, Jackie Kane, and Dr. Tim Schallert for assistance in developing the Vermicelli Handling Test, and Lu Chou for assistance in developing the Capellini Handling Test. Supported by grants from the NIH-NINDS (NS05689) and NIH-NIA (1F31AG034032-01).