Microiontophoresis entails movement of ions from a micropipette in response to a difference in electrical potential between the inside and outside of the micropipette. Biologically active molecules are thereby delivered in proportion to electrical current. We illustrate acetylcholine microiontophoresis in conjunction with micromanipulation to study endothelium-dependent vasodilation in the microcirculation.

Microiontophoresis entails passage of current through a micropipette tip to deliver a solute at a designated site within an experimental preparation. Microiontophoresis can simulate synaptic transmission1 by delivering neurotransmitters and neuropeptides onto neurons reproducibly2. Negligible volume (fluid) displacement avoids mechanical disturbance to the experimental preparation. Adapting these techniques to the microcirculation3 has enabled mechanisms of vasodilation and vasoconstriction to be studied at the microscopic level in vivo4,5. A key advantage of such localized delivery is enabling vasomotor responses to be studied at defined sites within a microvascular network without evoking systemic or reflexive changes in blood pressure and tissue blood flow, thereby revealing intrinsic properties of microvessels.

A limitation of microiontophoresis is that the precise concentration of agent delivered to the site of interest is difficult to ascertain6. Nevertheless, its release from the micropipette tip is proportional to the intensity and duration of the ejection current2,7, such that reproducible stimulus-response relationships can be readily determined under defined experimental conditions (described below). Additional factors affecting microiontophoretic delivery include solute concentration and its ionization in solution. The internal diameter of the micropipette tip should be ˜ 1 μm or less to minimize diffusional 'leak', which can be counteracted with a retaining current. Thus an outward (positive) current is used to eject a cation and a negative current used to retain it within the micropipette.

Fabrication of micropipettes is facilitated with sophisticated electronic pullers8. Micropipettes are pulled from glass capillary tubes containing a filament that 'wicks' solution into the tip of the micropipette when filled from the back end ("backfilled"). This is done by inserting a microcapillary tube connected to a syringe containing the solution of interest and ejecting the solution into the lumen of the micropipette. Micromanipulators enable desired placement of micropipettes within the experimental preparation. Micromanipulators mounted on a movable base can be positioned around the preparation according to the topography of microvascular networks (developed below).

1. Animal Care and Use

Following review and approval from the Institutional Animal Care and Use Committee, male mice at least 12 weeks old are used. A mouse is anesthetized with pentobarbital sodium (60 mg/kg) via intraperitoneal (i.p.) injection. Throughout surgical procedures and experimental protocols, anesthesia is maintained by supplements (10-20% of initial injection, i.p.) as needed (every 30-60 minutes; indicated by withdrawal response to toe or tail pinch). After completion of the experimental procedure the mouse is overdosed with pentobarbital (i.p.) and euthanized by cervical dislocation. 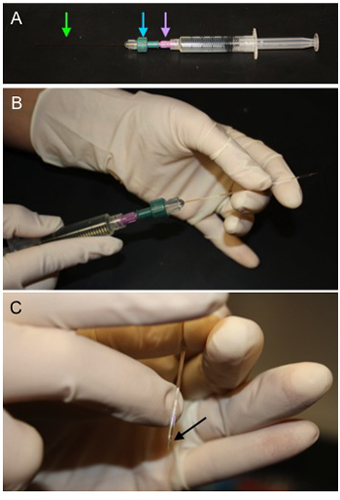 Figure 1. Method for Backfilling Microiontophoresis Pipettes. A) A microcapillary tube (green arrow) is secured in a compression fitting (blue arrow) attached to a 0.2 μm filter (purple arrow) which is then attached to a syringe filled with 1M ACh. B) The microcapillary tube is fed into the microiontophoresis pipette through the back end and solution is displaced to fill the lumen of the micropipette. C) Once the pipette is filled, hold the tip down and gently flick above the taper to remove bubbles (black arrow). 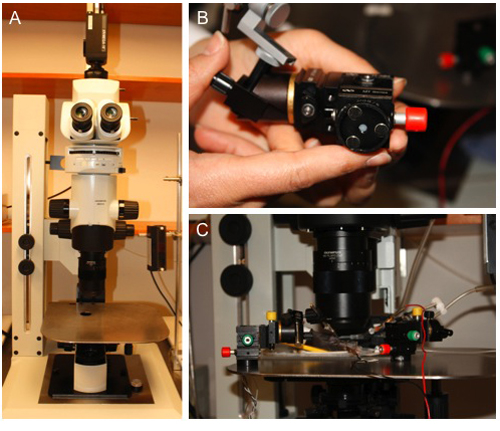 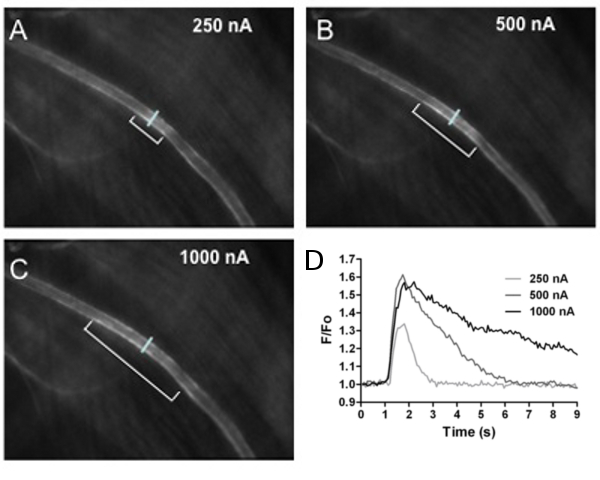 Figure 3. Calcium Fluorescence in Arterioles. Calcium fluorescence of endothelial cells lining the arteriolar wall increased with stimulus intensity. The first 3 panels shown images of fluorescence responses to A) 250 nA, B) 500 nA and C) 1000 nA ejection current (all 500 ms pulse duration). The distance over which endothelial cell calcium fluorescence increased is indicated by brackets in A-C (˜130, 270 and 400 μm, respectively). The reference line across the arteriole in each panel indicates where fluorescence responses (F/Fo) to ACh were recorded at the site of stimulation. D) Recordings of F/Fo vs. time for increasing ACh stimuli. As ejection current increased, F/Fo increased in amplitude and duration. Note that 100 nA stimulus was below threshold and had no effect. 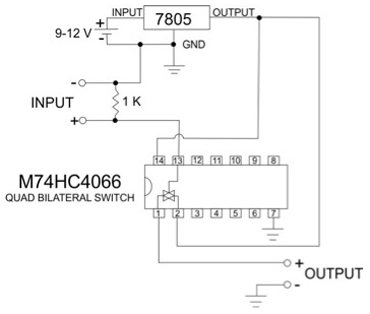 Supplementary Figure 1. Circuit diagram for electronic trigger. This circuit is interfaced with a parallel port from a personal computer. When activated it provides a constant TTL pulse of 5V. The 7805 chip is a 5V voltage regulator connected to a 9-12V DC power supply (a battery of appropriate voltage is fine). Output from the 7805 provides power to the Quad Bilateral Switch and to the output of the circuit. Input across the 1K resistor is from the computer.

The protocol described here demonstrates methods for preparing and implementing micropipettes for microiontophoresis. Delivery of acetylcholine is used to illustrate calcium signaling underlying endothelium-dependent vasodilation in arterioles of the anesthetized mouse. Our results illustrate that the distance over which ACh increases endothelial cell calcium fluorescence increases with the intensity of ejection current from the microiontophoresis micropipette (Figure 3). The lack of fluorescence increase under resting conditions indicates negligible leakage of ACh from the micropipette. The lack of response to 100 nA stimulus intensity (Figure 3, legend) illustrates that a threshold intensity of stimulation is required for endothelial cell calcium to increase. These techniques can be readily adapted to other vasoactive agents and tissue preparations.

Practical considerations: In working with microiontophoresis to study arteriolar reactivity, several things should be recognized. While it has proven difficult to determine the actual concentration of agonist delivered, stimulus-response curves are reproducible within and between preparations. These can be performed by holding pulse duration constant (e.g., 500 ms) and varying the ejection current (e.g., 250, 500 and 1000 nA; Figure 3). Alternatively, ejection current can be held constant (e.g., 500 nA) and pulse duration varied (e.g., 250, 500 and 1000 ms). For a reference to the actions of a defined agonist concentration, the preparation can be superfused with the appropriate solution5. Because the driving force for solute ejection is electrical charge movement, the agent to be delivered must carry a net charge to be displaced from the micropipette. To ensure that the agent of interest is the primary charge carrier, it is dissolved at high concentration (e.g., 1 M for ACh) to minimize electro-osmosis. When this requires manipulating the pH of the micropipette filling solution, vehicle controls are required to ascertain any nonspecific effects. Appropriate controls should also be performed for the passage of current alone (e.g., using micropipettes filled with isotonic saline). The effective distance for diffusion of the agent from its site of release should be ascertained and is most readily determined empirically by the disappearance of a physiological response (e.g., vasodilation or a rise in intracellular calcium upon ejection of ACh) as the micropipette is positioned at defined distances from the target site. In practice, the effective diffusion distance is greatly influenced by how the tip of the micropipette is positioned in the tissue; e.g. if the tip pressed down into the tissue and its tip is occluded, than ejection is impaired. Excessive connective tissue is particularly troublesome and should be removed from the tissue surface during surgical preparation. Attention should also be given to the possibility of depleting the tip of the designated agent. This is minimized by using relatively short pulses (e.g., ≤ 1 s). With sustained currents (e.g., several seconds), the agonist may be expelled from the tip more rapidly than it can be replaced by diffusion from the bulk filling solution in the micropipette.

Because negligible volume is displaced with microiontophoresis, if one is trying to change the local ionic milieu (e.g., to deliver a depolarizing K+ stimulus), this cannot be effectively accomplished with microiontophoresis but is readily achieved with pressure ejection of bulk fluid having the desired composition. For local stimulation of an arteriole, micropipette tips with internal diameters of 2-3 μm work well with ejection pressure 4-5 psi (28-35 kPa) and pulse duration (e.g., 1 second) controlled with a solenoid valve10. Where sustained delivery of an agent from a micropipette onto a microvessel is required, pressure ejection is preferred using micropipettes of appropriate internal tip diameter (e.g., ˜10 μm)11,12. A hydrostatic column of known height with a stopcock valve provides an inexpensive, well-defined on/off constant pressure head. Flow rates are determined by the inner diameter of the pipette tip and the driving pressure. As always, vehicle controls are essential to exclude nonspecific actions of pressure ejection.

All procedures and protocols involving animals were approved by the Animal Care and Use Committee of the University of Missouri and performed in accord with the National Institutes of Health Guide for the Care and Use of Laboratory Animals. Production of this article was sponsored by Stanford Photonics.