We present a protocol for concurrent collection of EEG/fMRI data, and synchronized MR clock signal recording. We demonstrate this method using a unique paradigm whereby subjects receive ‘cold glove’ instructions during scanning, and EEG/fMRI data are recorded along with hand temperature measurements both before and after hypnotic induction.

In the present work, we demonstrate a method for concurrent collection of EEG/fMRI data. In our setup, EEG data are collected using a high-density 256-channel sensor net. The EEG amplifier itself is contained in a field isolation containment system (FICS), and MRI clock signals are synchronized with EEG data collection for subsequent MR artifact characterization and removal. We demonstrate this method first for resting state data collection. Thereafter, we demonstrate a protocol for EEG/fMRI data recording, while subjects listen to a tape asking them to visualize that their left hand is immersed in a cold-water bath and referred to, here, as the cold glove paradigm. Thermal differentials between each hand are measured throughout EEG/fMRI data collection using an MR compatible temperature sensor that we developed for this purpose. We collect cold glove EEG/fMRI data along with simultaneous differential hand temperature measurements both before and after hypnotic induction. Between pre and post sessions, single modality EEG data are collected during the hypnotic induction and depth assessment process. Our representative results demonstrate that significant changes in the EEG power spectrum can be measured during hypnotic induction, and that hand temperature changes during the cold glove paradigm can be detected rapidly using our MR compatible differential thermometry device.

Since its inception, there has been considerable controversy as to what hypnosis is, and how exactly measurable physiologic changes in susceptible individuals are produced. Studies aimed at understanding the neural correlates of hypnosis and responses to hypnotic suggestion have generally produced varied results1, which may be due, at least in part, to differences in hypnotic induction and suggestion techniques2, thus providing motivation for a detailed methodology and protocol description.

Although hypnosis has conventionally been defined as a state of inner concentration and focused attention1,3, a more complete operational definition also includes: diminished awareness of exogenous stimuli4, increased absorption5, or effortless attention to words of the experimenter and diminished spontaneous thought6. A hypnotic induction is generally defined as a set of verbal instructions that facilitate hypnosis and absorption6. Hypnotizability varies greatly between individuals, but is generally stable within individuals over time7,8; suggestibility is typically measured in terms of behavioral response to suggestion with the most commonly applied metric being the Stanford Hypnotic Susceptibility Scale, (SHSS) form C9-12.

Studies that examine the neural correlates of hypnosis generally fall into two categories. Either they examine networks of activity intrinsically activated during 'resting state' hypnosis, or they study changes in neural activity that occur in response to hypnotic suggestion6. In a recent EEG study, highly suggestible individuals were found to display higher event related desynchrony of the frontal-parietal network in the alpha-2 band during hypnosis compared to low suggestible subjects4. Recently, functional magnetic resonance imaging (fMRI) has also revealed changes in anterior default mode networks during 'resting state' hypnosis without a corresponding increase in activity in other brain areas2. Converging evidence suggests that hypnosis is associated with dissociated anterior attentional control13.

Changes in fMRI blood oxygenation level dependent (BOLD) signals in response to a variety of hypnotic suggestions have also recently been reported14-23. The majority of suggestion-response studies correlate brain signal changes with subjective ratings of altered perception. However, hypnotic suggestion has also been used to alter physiologic parameters such as blood pressure, heart rate, and subject hand temperature in response24.

Here, we extend these earlier findings by developing an experimental paradigm, referred to here as the 'cold glove' paradigm, whereby subjects are directed to perceive that one of their hands is colder in temperature than the other, in absence of any external physical manipulation of temperature. These verbal instructions are delivered via MR compatible headphones during data recording.

In the present work, we first demonstrate our method for simultaneous EEG/fMRI data recording. We then demonstrate the cold glove paradigm, which includes collection of EEG/fMRI data along with hand temperature measurements both before and after hypnotic induction. Our method for hypnotic induction includes an ideomotor suggestion described by1, followed by a depth assessment using the SSHS, form C. We detect reliable changes in the EEG power spectrum that occur following hypnotic induction. We also demonstrate that our MRI compatible differential thermometry device is capable of measuring hand temperature changes during simultaneous EEG/fMRI data collection session. This procedure may provide important quantitative EEG/fMRI measurements in assessing brain signal changes that occur during intrinsic 'resting state' hypnosis as well as measuring signal changes in response to hypnotic suggestion for altered thermal perception.

The following experimental protocol was reviewed and approved by the UCLA Institutional Review Board. Prior to commencing the experiment, subjects underwent a phone prescreening that excluded subject that were potentially pregnant, under the age of eighteen, or who had worked in a machine show or otherwise had metallic implants. Left-handed subjects, or those with a history of mental illness were also excluded from the subject pool. Included participants were then instructed to abstain from caffeine, drugs, and alcohol on the day of the experiment. Written informed consent and comprehension of consent was obtained from each participant on the day of the experiment.

The EEG data are recorded using a 256-channel MRI compatible Geodesic Sensor Net. Impedance levels in electrodes should be monitored (step 1.5) at approximately 20 min intervals throughout the experiment to make sure that electrodes have not dried out and that impedances remain below threshold.

2. Concurrent EEG/fMRI and Temperature Recording Protocol Prior to Hypnosis

After the EEG net is applied appropriately, the subject proceeds to the MR scanner room. All metal objects are removed. Structural MRI and functional MRI scans are collected on a Siemens Allegra 3T scanner. Simultaneous EEG/fMRI data is collected prior to hypnotic induction in order to establish a functional baseline for each subject.

Subjects were then seated comfortably in a dimly lit, quiet room. EEG data were recorded throughout the duration of the hypnotic induction and progressive relaxation deepening technique.

Figure 1 shows the EEG power spectrum in a representative channel (Figure 1a) averaged over 1,000 msec in a single subject during the alert wakeful period that preceded hypnotic induction (Figure 1b). It should be noted that the patterns here follow the characteristic inverse relationship between power and frequency (f), with falloff at 1/f. Figure 1c shows the power spectrum taken from this same subject following hypnotic induction and a deepening technique. Attenuation of power can be seen in EEG theta and beta subbands, and the overall plot no longer follows 1/f. Figure 2 shows our schematic for an MRI compatible temperature sensor, which uses LM34/LM35 precision temperature sensors coupled to an Arduino device. 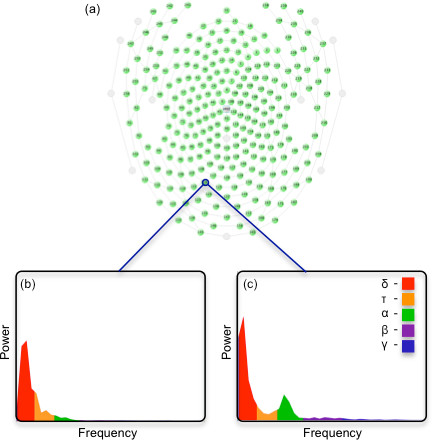 Figure 1. Electroencephalogram (EEG) power spectrum in a single subject for a representative electrode channel. (a) 255 channel EEG electrode array with the spatial location of the channel selection for the power analysis marked in blue (b) EEG power spectrum prior to hypnotic induction, and (c) power spectrum in the same electrode channel following hypnotic induction and a deepening technique. The bar at the top, right corner of Figure 1c indicates the legend for each EEG subband with frequencies: delta (0.1-4 Hz), theta (4-8Hz), alpha (8-12 Hz), beta (12-20 Hz), and gamma (frequencies above 20 Hz). 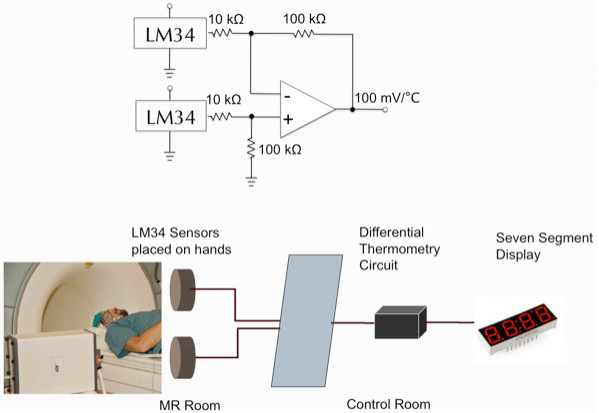 There appears to be wide variability in suggestion methods used to induce subjects into a state of hypnosis1. We demonstrate here that a suggestion for nonvolitional motor movement followed by the SHSS, form C, can be used to alter EEG power spectrum. We note that although the subject used in this study had been hypnotized in the past, there was no attempt made via Harvard Group Suggestibility Scale or other mechanism to find a highly susceptible subject. We hypothesize that the magnitude of changes in EEG frequency subbands likely varies according to subject level of susceptibility, as has been reported4.

We also demonstrated a setup to measure hand temperature fluctuations that may occur during a concurrent EEG/fMRI session. Although subjects can eventually learn to accomplish hand temperature changes without hypnosis using biofeedback cues, this typically takes many training sessions26. Frischholz and Tryon26 were unable to replicate the association between changes in hand temperature and hypnotic depth using the cold glove suggestion paradigm, contrary to that reported by others27. Additional work is required to resolve this controversy. Nonetheless, the method for measuring hand temperature changes during a functional neuroimaging session may prove useful in assessing the neural correlates of the hypnotic 'cold glove' suggestion following hypnotic induction.

Following its acceptance and publication, Electrical Geodesics, Inc. has underwritten the open access fee for this article

This work was supported by funds from the Korean Basic Science Institute (KBSI) grant, Neuroimaging Studies of Hypnotically Induced Deception.