Recombinant adeno-associated virus (rAAVs) vectors are becoming increasingly valuable for in vivo studies in animals. We describe how rAAVs can be produced in the laboratory and how these vectors can be titered to give an accurate reading of the number of infectious particles produced.

In recent years recombinant adeno-associated viral vectors (AAV) have become increasingly valuable for in vivo studies in animals, and are also currently being tested in human clinical trials. Wild-type AAV is a non-pathogenic member of the parvoviridae family and inherently replication-deficient. The broad transduction profile, low immune response as well as the strong and persistent transgene expression achieved with these vectors has made them a popular and versatile tool for in vitro and in vivo gene delivery. rAAVs can be easily and cheaply produced in the laboratory and, based on their favourable safety profile, are generally given a low safety classification. Here, we describe a method for the production and titering of chimeric rAAVs containing the capsid proteins of both AAV1 and AAV2. The use of these so-called chimeric vectors combines the benefits of both parental serotypes such as high titres stocks (AAV1) and purification by affinity chromatography (AAV2). These AAV serotypes are the best studied of all AAV serotypes, and individually have a broad infectivity pattern. The chimeric vectors described here should have the infectious properties of AAV1 and AAV2 and can thus be expected to infect a large range of tissues, including neurons, skeletal muscle, pancreas, kidney among others. The method described here uses heparin column purification, a method believed to give a higher viral titer and cleaner viral preparation than other purification methods, such as centrifugation through a caesium chloride gradient. Additionally, we describe how these vectors can be quickly and easily titered to give accurate reading of the number of infectious particles produced.

See Figure 1 for an illustration summarizing the following protocol.

Safety Note: All material that has been in contact with assembled viral particles needs to be disinfected with Virkon solution or other suitable disinfectant.

3. Transfection of viral plasmids (~1 hour for transfection, 3 days for incubation)

4. Lysing of cells and harvesting of rAAVs (2 hours)

This requires a promoter that is active in Hek293 cells driving a reporter gene or an immunocytochemically detectable gene product. When producing a vector that is not compatible with Hek293 cells other cell lines or primary cell cultures can be used. 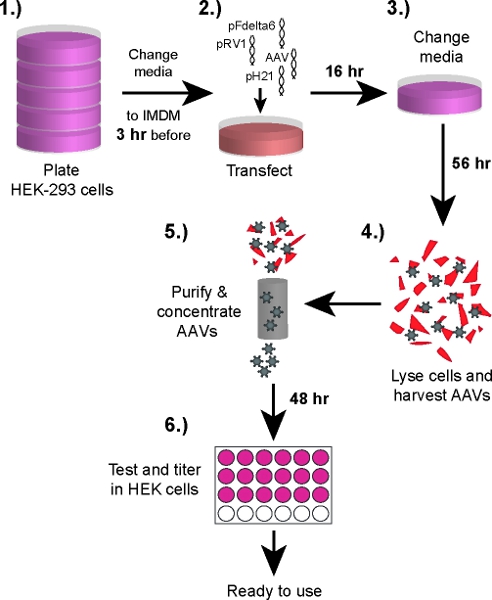 Figure 1. Schematic illustration of the protocol for rAAV production. 1.) Hek293 cells are plated and grown to 70 - 80% confluence. 2.) AAV and helper plasmids are prepared and transfected into Hek293 cells. 3.) Medium is changed back to DMEM 16 hours after transfection and Hek293 cells are cultured for another 56 hours. 4.) Hek293 cells are harvested and lysed. rAAV vectors are separated from cell debris by centrifugation. 5.) Viral particles are purified through heparin columns before concentration and sterilisation. 6.) Hek293 cells are grown on 24 well plates and infect with serial dilutions of the AAV vector to determine the number of infectious units. 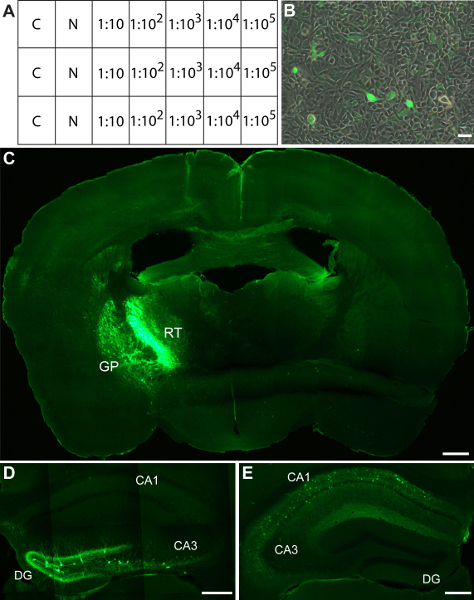 rAAV vectors are becoming increasingly valuable for in vivo studies in animals. Here, we have described a simple and inexpensive protocol for producing rAAVs, which may facilitate the widespread application of this useful vector by avoiding the costly outsourcing of virus production to companies. The protocol (based on reference 1) describes the production of chimeric rAAV1/2 vectors containing capsid proteins from both parental serotypes at equal ratios 4. The purification of the rAAV vectors by binding to heparin columns relies on the expression of AAV2 capsid proteins, but can be combined with serotypes other than AAV1 outlined here. Additionally, AAV6 has been reported to bind to heparin, although with a reduced affinity, and could potentially be purified with heparin columns using this procedure 5,6. It should be noted however, that other serotypes will require different concentrations of NaCl for heparin column elution 5,7.

Packaging rAAV genomes was shown to be optimal between 4.1 and 4.9 kb with a sharp reduction in packaging efficiency up to 5.2 kb 8. This packaging limit can be considered the largest disadvantage of the rAAV system, since cell type-specific regulation of transgene expression is usually achieved by large cis acting elements which can not be accommodated within the small AAV particles. To overcome low titer batches, such as those resulting from attempting to package genes that are close to the AAV packing limit we are combining separate viral batches concentrated to 250 μl into one 500 μl batch, rather than adding PBS as outlined in step 6.3. Reliable cell-type specific transduction can be achieved by combining Cre-driver mice and conditional rAAV cassettes (see below) to avoid stretching the packaging limit.

Of note, while this protocol attempts to provide easy-to-follow instructions on the production of high titer rAAV, it requires the presence of AAV2 capsid protein moieties for purification by heparin affinity chromatography. Serotypes other than AAV2 must be purified using alternate procedures 9. One advantage of heparin column purification is it is believed to produce AAV vectors that have greater infectivity rate than those produced using a caesium chloride gradient 10. However, there are also some drawbacks to this method. For example, other proteins that bind heparin may also be present in the purified viral stock. While the tropism of heparin-purified vectors can be influenced by the vector titer10, our approach to specifically target either excitatory20 or inhibitory neurons (Fig. 2) employs Cre-induced activation of AAV-mediated transgene expression and is titre-independent. An alternative to heparin column purification is the use of an iodixanol density gradient, which produces a higher viral titer and purer preparation than the use of a caesium chloride gradient 10. This method can also be combined with heparin column purification to produce a vector that is greater than 99% pure 11. Therefore, careful consideration needs to be taken by individual groups as to which viral purification method is best for their particular downstream application.

The most common problem associated with this protocol is low viral titer. In our experience this can usually be traced to low transfection efficiency, or the elution of virus from the heparin columns. All transfection materials should be at room temperature before transfection, and test transfections should be performed to find the optimal conditions in each laboratory. Other methods of transfection, such as lipofectamine, are highly efficient, but can be prohibitively expensive. Additionally, the concentration and pH of the heparin column elution solutions is critical for complete elution of virions from heparin columns without damage. Another important point is that the packaging cells must adhere well to the surface of the tissue culture dishes. If the cells detach at some stage during the procedure it is advised to terminate the experiment and defrost a new vial of cells.

Spatio-temporal control of transgene expression in rodents is easily achieved by accurate anatomical targeting and the developmental stage of the animal. Efficient AAV-mediated gene transfer has been shown in utero 12,13. In the adult brain, the area infected with rAAV particles after stereotaxic injection can be adjusted from very small targeted regions, to much larger areas not only by changes in the viral titer but also by altering the injection parameters. These include the volume and speed of injections and the inclusion of the polyol mannitol with the virus suspension 14. Mannitol can also be used to enhance infection of a variety of tissues after systemic rAAV injection 15.

The packaging capacity of rAAV (approximately 4.7 kb) is probably the most limiting factor in terms of the genes that can be expressed from these viral vectors. However, recent studies have shown that this can be partially overcome by splitting larger genes or expression cassettes into separate rAAV vectors and introducing a bridging sequence, initiating gene expression when virions infect the same cell 16. Expression levels of genes carried by rAAV vectors can also be greatly enhanced by using self-complimentary rAAV vectors 17. Stereotaxic injection of rAAV vectors provides a rapid, inexpensive and powerful method for inducing gene expression in a region-specific manner. In combination with 2nd generation RNA interference strategies 18 rAAVs can also be used for region-specific gene-knock down. rAAVs can be combined with Cre-transgenic mice or cell-type specific promoters to achieve circuit- and cell-type-specific gene expression, permitting genetic manipulations with high spatial resolution 2,19-21, while fitting rAAVs with e.g. the tet system adds temporal control over virus-mediated gene expression 22,23.These examples illustrate the enormous combinatorial potential of these vectors and predict a rapid increase in rAAV-based studies over the years to come.