Electrical impedance spectroscopy (EIS) and cyclic voltammetry (CV) measure properties of the electrode-tissue interface without additional invasive procedures, and can be used to monitor electrode performance over the long term. EIS measures electrical impedance at multiple frequencies, and increases in impedance indicate increased glial scar formation around the device, while cyclic voltammetry measures the charge carrying capacity of the electrode, and indicates how charge is transferred at different voltage levels. As implanted electrodes age, EIS and CV data change, and electrode sites that previously recorded spiking neurons often exhibit significantly lower efficacy for neural recording. The application of a brief voltage pulse to implanted electrode arrays, known as rejuvenation, can bring back spiking activity on otherwise silent electrode sites for a period of time. Rejuvenation alters EIS and CV, and can be monitored by these complementary methods. Typically, EIS is measured daily as an indication of the tissue response at the electrode site. If spikes are absent in a channel that previously had spikes, then CV is used to determine the charge carrying capacity of the electrode site, and rejuvenation can be applied to improve the interface efficacy. CV and EIS are then repeated to check the changes at the electrode-tissue interface, and neural recordings are collected. The overall goal of rejuvenation is to extend the functional lifetime of implanted arrays.

1. Set up the Electrochemistry Instrument

A typical workflow, including recordings, EIS, CV and rejuvenation, is shown in figure 1. Recordings and EIS are collected most frequently (daily or weekly) across all channels, while CV and rejuvenation can be used if spiking activity is no longer detectable.

EIS changes over the course of days to weeks after an electrode is implanted. When EIS data is displayed as a Nyquist plot, a semicircle at higher frequencies (near the origin) is indicative of the tissue response at the electrode site (Fig 2).

CV produces a current-voltage (I-V) curve showing some hysteresis. The most relevant CV statistic is the charge carrying capacity, the area inside the I-V curve normalized by the electrode site area (Fig 3 a). Electrodes with large charge capacity are preferred for micro-stimulation. 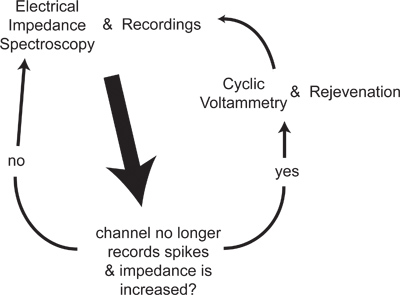 Figure 1. EIS is measured after each recording session. If no spikes are recorded on a channel that previously had spikes, and EIS shows a large tissue component that has increased over time, then CV and rejuvenation are tried on this channel. EIS and recordings are then used to determine if the treatment was successful.

Figure 2. EIS data displayed in a Nyquist plot of an electrode site immediately after implantation (blue), and 4 months later (green). Each point on the Nyquist plot represents the real and imaginary impedance at a single frequency. A partial semicircle due to the tissue around the site is evident at higher frequencies.

Figure 3. CV and EIS changes of an implanted iridium oxide electrode pre- and post-rejuvenation. (A) Rejuvenation increases the area of the I-V curve corresponding to an increased charge carrying capacity. (B) A significant shift in the impedance specra to lower impedance levels is generally observed after rejuvenation. 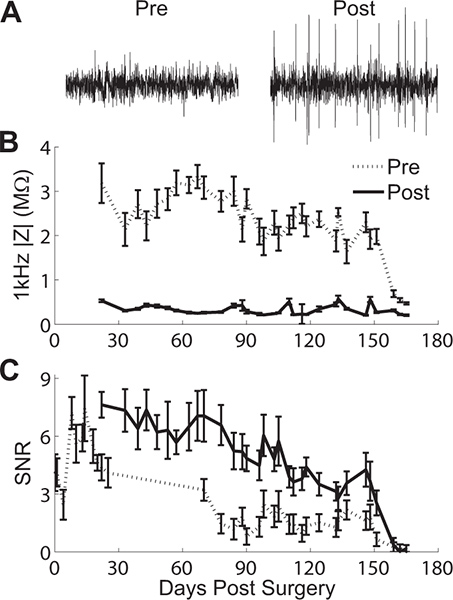 Figure 4. Effects of voltage biasing on recordings and impedance. (A) Pre- and post-rejuvenation recordings show spikes can be recovered on channels that had previously been silent. Daily pre- and post-rejuvenation results in a robust (B) drop in 1 kHz impedance magnitude and (C) increase in SNR for approximately 150 days after surgery. Errorbars represent standard error from data collected from a 16-channel array implanted in guinea pig cortex.

Neural recording prosthetic systems display a limited functional lifetime as recording capability decreases with time post-implantation. The likely contributor to diminishing performance is the reactive tissue response to the implanted device as a compact glial sheath functionally isolates the foreign object from healthy tissue1. Along with neural recording, electrochemical measurements (EIS and CV) are typically used for longitudinal monitoring of the electrode-tissue interface2,3. EIS is practically useful in assessing the recording capability of the interface. The impedance quickly increases with time post-implantation suggesting the reactive tissue response alters the electrical properties of the interface3. Additionally, EIS data can be used to model the cellular composition adjacent to the implanted electrode3-5. Cyclic voltammetry can be used to further investigate changes in recordings and EIS. The electrode material and roughness as well as the electrochemical reactions and the surrounding tissue influence the shape of the I-V curve. Large charge carrying capacity, determined from the area of the I-V curve, is usually preferred, especially for electrical micro-stimulation. Low charge capacity is often associated with increased EIS. The potential applied during CV may itself alter charge capacity and EIS, especially if the voltage range is large enough to drive redox reactions.

The application of voltage biasing, or rejuvenation, can be used with the purpose of increasing charge carrying capacity, decreasing impedance, and increasing the number channels with recorded spikes5. Oxidation is likely occurring at the electrode interface during rejuvenation, and with iridium materials, a hydrous oxide monolayer forms at anodic potentials of 1.2 V6. It has been suggested that the formation of this monolayer may remove cellular and acellular material attached to the electrode resulting in lower impedance at the interface5. While rejuvenation can recover lost neural signals, it is most effective if used on channels that previously had spikes within a few days prior. Recordings, EIS, CV, and rejuvenation can best be used as complementary tools in monitoring the neural interface and improving the long-term functionality of implanted devices.

This research was supported by the National Institutes of Health (R03DC009339-02, NIDCD) and by the Defense Advanced Research Projects Agency (DARPA) Microsystems Technology Office (MTO), under the auspices of Dr. Jack W. Judy (jack.judy@darpa.mil) as part of the Reliable Neural Technology Program, through the Space and Naval Warfare Systems Command (SPAWAR) Systems Center (SSC) Pacific grant No. N66001-11-1-4013.