A method to conditionally knockdown a target protein’s expression in the adult zebrafish retina is described, which involves intravitreally injecting antisense morpholinos and electroporating them into the retina. The resulting protein is knocked down for several days, which allows testing the protein’s role in the regenerating or intact retina.

Many devastating inherited eye diseases result in progressive and irreversible blindness because humans cannot regenerate dying or diseased retinal neurons. In contrast, the adult zebrafish retina possesses the robust ability to spontaneously regenerate any neuronal class that is lost in a variety of different retinal damage models, including retinal puncture, chemical ablation, concentrated high temperature, and intense light treatment 1-8. Our lab extensively characterized regeneration of photoreceptors following constant intense light treatment and inner retinal neurons after intravitreal ouabain injection 2, 5, 9. In all cases, resident Müller glia re-enter the cell cycle to produce neuronal progenitors, which continue to proliferate and migrate to the proper retinal layer, where they differentiate into the deficient neurons.

Morpholino oligos are widely used to study loss of function of specific proteins during the development of zebrafish, Xenopus, chick, mouse, and tumors in human xenografts 11-14. These modified oligos basepair with complementary RNA sequence to either block the splicing or translation of the target RNA. Morpholinos are stable in the cell and can eliminate or "knockdown" protein expression for three to five days 12.

Figure 1. Schematic depicting the removal of the epithelial layers of the cornea. The left panel shows the major structural features of the eye, including the lens (L), the vitreous (Vit), the retina (R), the outer cornea (OC), the inner cornea (IC), and the corneal protrusion (CL). The orientation of the eye is shown in the lower right of the first panel and is labeled anterior (A), posterior (P), dorsal (D), and ventral (V). The red coloration indicates the outer cornea that is removed. The second panel shows how the forceps are used to grasp the corneal protrusion and to pull the outer cornea across the eye at a low angle (third panel). The right panel shows how a second pair of forceps can be used to steady the eye while pulling the cornea.

Figure 2. Schematic of the steps involved in the intravitreal injection of morpholino. A small incision is made in the eye where the pupil meets the iris (left panel). The resulting gap should be just large enough for a 33 gauge needle, which is filled with the morpholino solution, to be inserted (middle panel). Slowly inject 0.5 μl of solution into the vitreous (right panel). You should visualize a small amount of vitreal solution come out of the incision as the vitreous is partially replaced by with lissamine-tagged morpholino (right panel).

Figure 3. Schematic of the general electroporation procedure. The anesthetized fish, which was intravitreally injected with the morpholino, is gently wrapped in damp paper towel (left panel). The paper towel should cover the gills, but not obstruct the eye (middle panel). Gently press the positive electrode down on the ventral part of the eye, allowing the dorsal half of the eye to rotate out of the socket. Place the negative electrode approximately 1 mm from the dorsal half of the eye and start the electroporation (right panel). 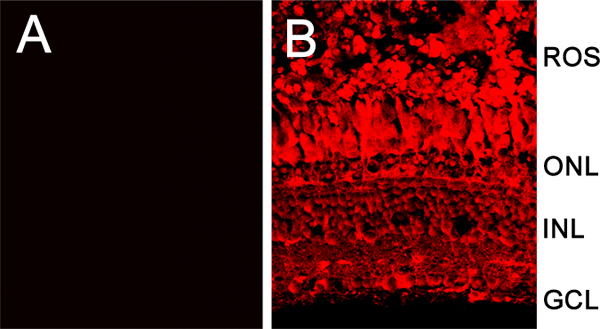 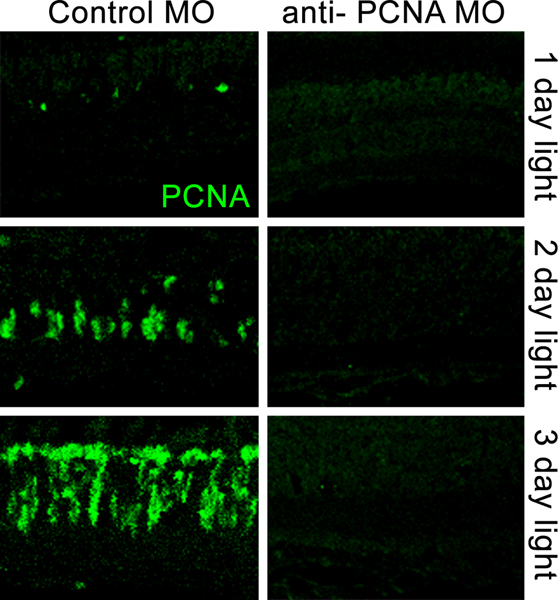 Figure 6. Schematic (left panel) showing enucleation of the eye for processing and cryosectioning, which is done along the dorsal ventral axis. The pink shaded box (right panel) shows the retinal region with the greatest amount of protein knockdown using this technique. The blue shaded boxes represent areas that are most often damaged by the electroporation event. The orientation of the eye is labeled anterior (A), posterior (P), dorsal (D), and ventral (V).

Recently, two microarray analyses examined the gene expression changes that occurred during the regeneration of either the light-damaged retina or a surgically-excised retinal patch10, 16. Both studies revealed numerous genes that exhibited significant changes in expression, either increasing or decreasing, that likely are required for different events that occur during retinal regeneration, such as re-entry of the Müller glia into the cell cycle, continued proliferation and migration of the neuronal progenitors to the damaged retinal layer, and the differentiation of the neuronal progenitors into the correct neuronal cell type. While a direct comparison of these two microarray data sets reveal candidate genes that may be involved in these cellular events, ultimately these genes and their encoded proteins must be tested to determine if they are necessary for neuronal regeneration. Here, we describe a powerful loss-of-function approach to conditionally knockdown proteins of interest in the adult zebrafish retina. This technique has been used to study both extracellular and intracellular proteins, as well as signaling molecules, transcription factors and proteins required for DNA replication 17-19. Thus, this method has greatly aided our understanding of the molecular mechanism underlying adult retinal regeneration in zebrafish.

We tested multiple electroporation parameters (voltage, number of pulses, time between pulses) before a successful protocol was achieved. A previous report of electroporating morpholinos into the regenerating zebrafish caudal fin used 10 pulses at a low voltage (15 V) 20. Because the adult zebrafish retina is surrounded by multiple cell layers and is not readily accessible to tweezer electrodes, the parameters used in the fin were unsuccessful at efficiently electroporating morpholinos into the adult retina. Conversely, a high voltage (100 V) often resulted in death to the fish. Recently, 5 pulses of 80 V was described to electroporate plasmid DNA into the newborn mouse pup retina 21. We found that a slightly less intense 2 pulses of 75 V resulted in successful electroporation of the morpholinos into the adult zebrafish retina with survival of 100% of the treated fish. Additionally, we discovered that the removal of the outer most (or external-most) component of the cornea greatly increased the electroporation efficiency. Increasing the number of pulses may eliminate the need for removal of this tissue but may also cause greater tissue damage. Extensive control studies demonstrated that these parameters did not cause any significant retinal cell death or alter the specific cellular responses observed during photoreceptor regeneration 19. Gain-of-function studies are not currently possible using this technique in vivo, due to our inability to consistently electroporate large ribonucleic acids into all retinal cells. However, the success of electroporating plasmids into the mouse retina in vivo and the zebrafish retina in explants suggests it is still a possibility in zebrafish 21, 22.

One of the strengths of this technique is the electroporation appears to efficiently introduce the morpholino into all of the different retinal cell types. However, one potential weakness was that the electroporation efficiently delivered the morpholino into only the dorsal and central retinal regions. A second electroporation event toward the ventral half of the retina results in good targeting to all layers, but often results in damage. This spatial restriction likely was due to the shape and placement of the electrodes. The use of custom-designed cup shaped electrodes that could be placed around the eye may improve this weakness. This spatial restriction of the morpholino delivery limits the use of this technique and precludes the use of an assay such as ERG analysis that would require a global assessment of the retina. It should be noted that as with any morpholino experiment, it is advisable to confirm your results using a second, non-overlapping morpholino to the target mRNA. In some cases, it is possible to also electroporate two different morpholinos simultaneously to knockdown the expression of two different proteins. We demonstrated this by knocking down the expression of both the Pax6a and Pax6b proteins, individually and in combination 18.

Although we demonstrated the use of this technique with our light damage model, it could likely be used to study regeneration in other damage models 2-8 or used to examine the function of proteins in the undamaged retina. For example, electroporation of morpholinos could be used to knockdown the expression of specific channels or signal transduction molecules in ganglion or amacrine cells and then study the function of these signaling pathways in visual processing. However, as morpholinos only affect translation of new protein, one would have to wait until endogenous protein turnover occurs before an assay could be performed. Depending on the stability of the protein, that could range from hours to days 18.

The authors would like to thank the Freimann Life Science Center and Center for Zebrafish Research staff for their care and maintenance of the zebrafish.