Reversible addition-fragmentation chain transfer (RAFT) polymerization integrates the advantages of radical polymerization and living polymerization. This work presents the preparation of methionine functionalized biocompatible block copolymers via RAFT polymerization. Firstly, N,N-bis(2-hydroxyethyl)methacrylamide-b-N-(3-aminopropyl)methacrylamide (BNHEMA-b-APMA, BA) was synthesized via RAFT polymerization using 4,4’-azobis(4-cyanovaleric acid) (ACVA) as an initiating agent and 4-cyanopentanoic acid dithiobenzoate (CTP) as the chain transfer agent. Subsequently, N,N-bis(2-hydroxyethyl)methacrylamide-b-N-(3-guanidinopropyl)methacrylamide (methionine grafted BNHEMA-b-GPMA, mBG) was prepared by modifying amine groups in APMA with methionine and guanidine groups. Three kinds of block polymers, mBG1, mBG2, and mBG3, were synthesized for comparison. A ninhydrin reaction was used to quantify the APMA content; mBG1, mBG2, and mBG3 had 21%, 37%, and 52% of APMA, respectively. Gel permeation chromatography (GPC) results showed that BA copolymers possess molecular weights of 16,200 (BA1), 20,900(BA2), and 27,200(BA3) g/mol. The plasmid DNA (pDNA) complexing ability of the obtained block copolymer gene carriers was also investigated. The charge ratios (N/P) were 8, 16, and 4 when pDNA was complexed completely with mBG1, mBG2, mBG3, respectively. When the N/P ratio of mBG/pDNA polyplexes was higher than 1, the Zeta potential of mBG was positive. At an N/P ratio between 16 and 32, the average particle size of mBG/pDNA polyplexes was between 100-200 nm. Overall, this work illustrates a simple and convenient protocol for the block copolymer carrier synthesis.

In recent years, gene therapy has emerged for the therapeutic delivery of nucleic acids as drugs to treat all kinds of diseases1. The development of gene drugs including plasmid DNA (pDNA) and small interfering RNA (siRNA) relies on the stability and efficiency of the drug delivery system (DDS)2. Among all DDS, cationic polymer carriers have the advantages of good stability, low immunogenicity, and facile preparation and modification, which give cationic polymer carriers broad application prospects3,4. For practical applications in biomedicine, researchers must find a cationic polymer carrier with high efficiency, low toxicity, and good targeting ability5. Among all polymer carriers, block copolymers are one of the most widely used drug delivery systems. Block copolymers are intensively studied for their self-assembly property and abilities to form micelles, microspheres, and nanoparticles in drug delivery5. Block copolymers can be synthesized via living polymerization or click chemistry methods.

In this paper, a RAFT polymerization method was designed to prepare BNHEMA-b-APMA block polymer, taking 4,4’-azobis(4-cyanovaleric acid) (ACVA) as an initiating agent and 4-cyanopentanoic acid dithiobenzoate (CTP) as a chain transfer agent. RAFT polymerization was used twice to introduce BNHEMA into the cationic polymer carriers. Subsequently, the amine groups in the APMA chain were modified with methionine and the guanidinylation reagent 1-amidinopyrazole hydrochloride. Making the use of the positive charges of the guanidinylation reagent and methacrylamide polymer skeleton structure, the cellular uptake efficiency of the obtained block polymer carriers was improved.

3. Determine the mole percent of APMA in BA copolymer via the ninhydrin method

NOTE: Spectrophotometry is used to determine the contents of multicomponent amino acids. The principle is a color reaction of ninhydrin and amino acid where the absorbance is correlated with the amino acid content to a certain extent13,14.

NOTE: An electrophoretic retardation experiment was conducted to determine the minimum charge ratio.

Electrophoretic retardation is a rapid and simple technique that involves separation of unbound pDNA and copolymer/pDNA polyplex based on differences in their electrophoretic mobilities in agarose gels. The unbound pDNA band can move in the agarose gel under the action of the electric field. In the electrophoretic retardation experiment (Figure 4), pDNA (with an N/P ratio of 0) can move without restraint in the agarose gel and was observed as a stripe in the gel imager. When pDNA is complexed with mBG, the movement of pDNA is retarded and subsequently, the brightness of the band is reduced. Figure 4 shows that mBG can completely complex the pDNA when N/P is higher than 4.

The N/P ratio used in the pDNA transfection experiment was selected according to the cytotoxicity results. As shown in Figure 6, the transfection abilities of mBG1, mBG2, and mBG3 were compared by measuring the GFP fluorescence intensity and the results showed that mBG3 is the optimal gene carrier. Although PEI/pDNA polyplexes with an N/P ratio of 8 have similar transfection efficiency as mBG3/pDNA polyplexes with an N/P ratio of 32, PEI has higher cytotoxicity and has no functions such as drug loading, which restricts its application in the biomedical field. The results revealed that the increase of AMPA content is key to improving the transfection efficiency of mBG copolymer. As we mentioned in an earlier study5, cell penetrating peptides (CPPs) are 9-35 mer cationic or amphipathic peptides with an ability to penetrate the cell membrane. The guanidine group is a cationic CPP that can be conjugated into a polymer to enhance the transfection of polymer/pDNA polyplex through a protein-independent transmembrane pathway. Therefore, mBG copolymer integrates advantages relating to guanidine groups for cell penetration and the BNHEMA component for shielding, showing great potential for effective gene delivery.

Table 1: The composition of BNHEMA-b-APMA by RAFT polymerization. 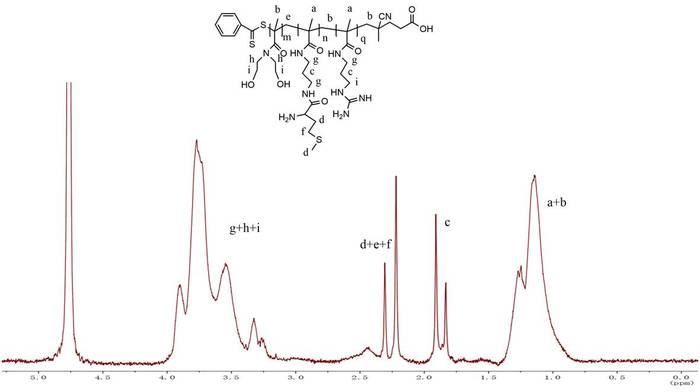 Figure 2: 1H NMR spectra of mBG in D2O. Please click here to view a larger version of this figure. 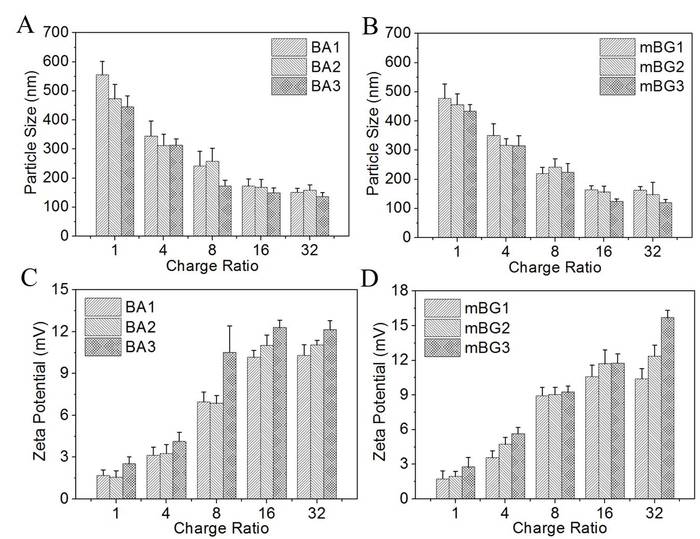 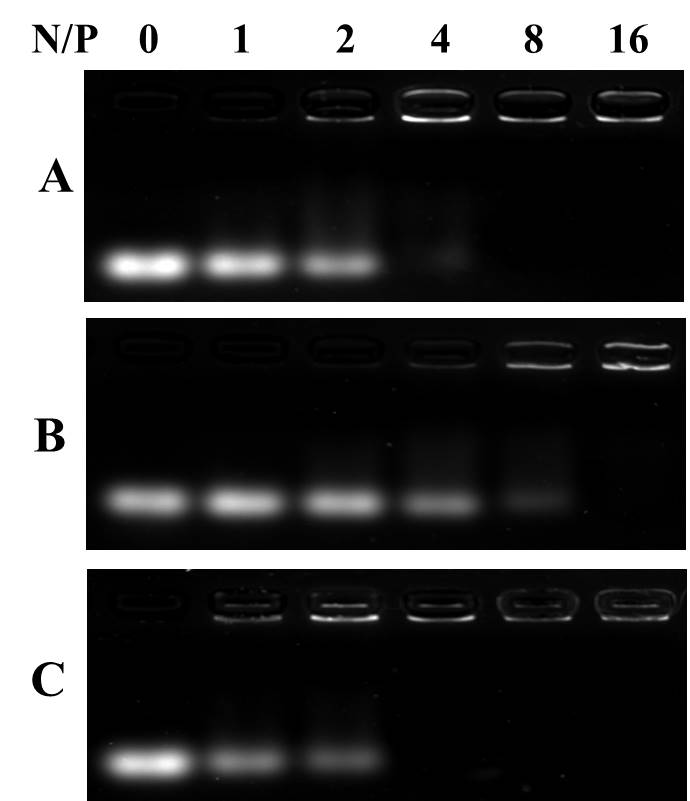 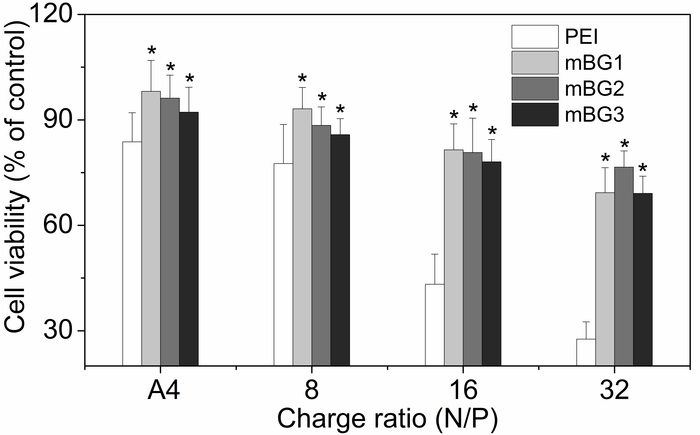 Figure 5: Cytotoxicity of mBG/pDNA polyplexes at different N/P ratio in MCF7 cell line.
PEI/pDNA polyplex was used as the control. The data were shown as mean ± SD (n=3). * indicates p<0.05 as compared to the PEI group. Please click here to view a larger version of this figure. 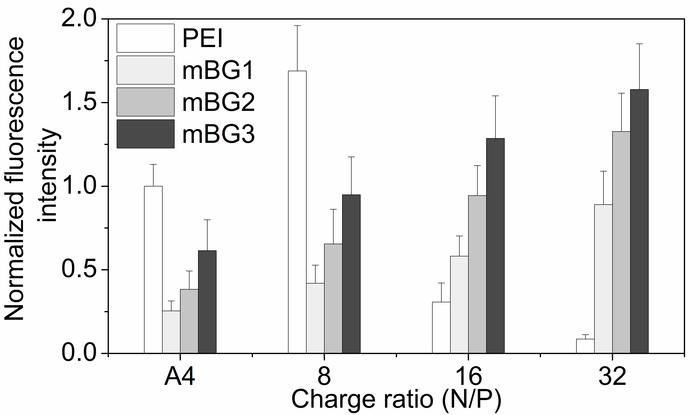 Figure 6: Transfection efficiency of mBG/pDNA polyplexes at N/P ratio of 4, 8, 16 and 32 were measured by flow cytometer.
The data were showed as mean ± SD (n=3). Please click here to view a larger version of this figure.

This study introduced a series of BNHEMA-b-APMA block polymer cationic gene carriers. These block polymers were synthesized via the reversible addition-fragmentation chain transfer (RAFT) method. The hydrophilic segment BNHEMA was introduced to improve solubility. Methionine and guanidine groups were modified to improve the target ability and transfection efficiency5. The APMA chain content increased and guanidinylation in mBG copolymer reduced the particle size of mBG/pDNA polyplexes. The particle size and surface potential make the complex easy to across the cell membrane and applicable to transfection. The critical points in the experiment lie in strictly controlling the molar ratio of the BNHEMA monomer and CTP to 45:1, the molar ratio of CTP and ACVA to 2:1, and the temperature to 70 °C. During the purifying process, the volume ratio of precooled acetone and polymer solution must be higher than 50:1.

With the same N/P value, along with the increase of the proportion of the APMA chain, the particle size of mBG/pDNA polyplexes decreases. These results indicate that APMA chain content increase and guanidinylation can reduce the particle size. The particle size and surface potential make the complex easy to transport across the cell membrane and applicable to transfection. Gel electrophoresis was used to investigate the relationship between complexing and N/P ratio and the data showed that the minimum N/P is 4. This study will provide valuable basic data for further study of cationic gene carriers. However, BNHEMA-b-APMA is not easily degraded and its metabolism process in vivo is not clear enough. Therefore, clinical application is still a great challenge for cationic polymer gene carriers.

High efficiency and low toxicity of gene carriers are the necessary conditions for their clinical use. Cationic polymer gene vectors have advantages of good stability and no immunogenicity and they can be prepared and modified easily.

The authors certify that there is no conflict of interest with any financial organization regarding the material discussed in this article.