Our immune system consists of a number and variety of immune cells including regulatory T cells (Treg) cells. Treg cells can be divided into two subsets, thymic derived Treg (tTreg) cells and peripherally induced Treg (pTreg) cells. They are present in different organs of our body and can be distinguished by specific markers, such as Helios and Neuropilin 1. It has been reported that tTreg cells are functionally more suppressive than pTreg cells. Therefore, it is important to determine the proportion of both tTreg and pTreg cells when investigating heterogeneous cell populations. Herein, we collected thymic glands, pancreatic draining lymph nodes and spleens from normoglycemic non-obese diabetic mice to distinguish tTreg cells from pTreg cells using flow cytometry. We manually prepared single cell suspensions from these organs. Fluorochrome conjugated surface CD4, CD8, CD25, and Neuropilin 1 antibodies were used to stain the cells. They were kept in the fridge overnight. On the next day, the cells were stained with fluorochrome conjugated intracellular Foxp3 and Helios antibodies. These markers were used to characterize the two subsets of Treg cells. This protocol demonstrates a simple but practical way to prepare single cells from murine thymus, pancreatic draining lymph node and spleen and use them for subsequent flow cytometric analysis.

Regulatory T (Treg) cells are critical for the homeostasis of immune system. Treg cells are defined by the expression of surface antigens CD4 and CD25, and the transcription factor forkhead box P3 (Foxp3)1,2,3. Sakaguchi et al. first showed that CD25 is constitutively expressed on T suppressor cells in mice4, which provided a pioneering observation for the identification of human Treg cells. Treg cells play a central role in immune tolerance by exerting a suppressive ability via a variety of mechanisms, including cytolysis through the secretion of granzymes to induce apoptosis, cytokine consumption and inhibition through the expression of cytotoxic T-lymphocyte antigen 45. Additionally, they can secrete inhibitory cytokines such as transforming growth factor beta (TGF-β), interleukin-10 (IL-10) and IL-355. Treg cells can naturally be derived from the thymus, in which case they are designated thymic derived Treg (tTreg) cells, or they can be induced in the peripheral organs in that case are called peripherally induced Treg (pTreg) cells.

Helios, a member of the Ikaros transcription factor family, was reported to be a marker for distinguishing between tTreg cells and pTreg cells6. Later, two other groups reported that Neuropilin 1 (Nrp1), a semaphorin III receptor, could serve as a surface marker for tTreg cells under certain conditions7,8. Nevertheless, Singh et al. have shown that Helios is a better marker in this context in naïve mice9.

The subsets of Treg cells play a pivotal role in the maintenance of the homeostasis of the immune system and in the protection against autoimmunity and infection. Therefore, it is important to determine the numbers and proportions of these populations in both lymphoid and non-lymphoid tissues. To achieve this, one has to prepare single cell suspensions from these organs. A number of protocols have been described or used in previous studies. Mainly, automatic dissociators have been used in previously published reports10,11. Using automatic dissociators is convenient and time saving, but it is an expensive procedure. Therefore, we have used a manual method to prepare single cell suspensions from murine thymic glands, pancreatic draining lymph nodes (PDLNs) and spleens from normoglycemic non-obese diabetic (NOD) mice, and isolated single cells from these organs. This method has been used in our previous studies and we found that the manual method for preparing single cell suspension is as efficient as automatic dissociator method9,12,13,14. Furthermore, we used flow cytometry to determine the proportions of CD4+CD8-CD25+Foxp3+ Treg cells and the subsets of Treg cells tTreg and pTreg cells. The tTreg and pTreg cells were distinguished using Helios and Nrp1 as markers for tTreg cell. Thus, our results indicate that the manual method for preparing the single cells does work efficiently and the prepared single cell suspensions can be further used for studies using flow cytometry.

To investigate the expression of Nrp1 and Helios on tTreg and pTreg cells, we prepared single cells from thymic glands, PDLNs and spleens of normoglycemic NOD mice and stained them with the Treg cell markers CD4, CD25, Foxp3, Helios and Nrp1 for flow cytometric analysis. The results were analyzed as shown in the representative gating strategies (Figure 1). We found that the proportion of Helios+ cells among CD4+CD8-CD25+Foxp3+ Treg cells was higher than that of Nrp1+ cells in all three organs (Figure 2A). More than 80% of the Treg cells in the thymus expressed Helios, which was higher than in the PDLN and spleen (Figure 2A). The proportion of Nrp1+ cells among Helios+ Treg cells was higher in the PDLN than those in the thymus and spleen (Figure 2B). The majority of Nrp1+ Treg cells also expressed Helios, and the proportions of Helios+ cells among Nrp1+Treg cells in the thymus and spleen were higher than that in the PDLN (Figure 2C). Together, these results indicate that Helios is a better marker to detect tTreg cells than Nrp1. 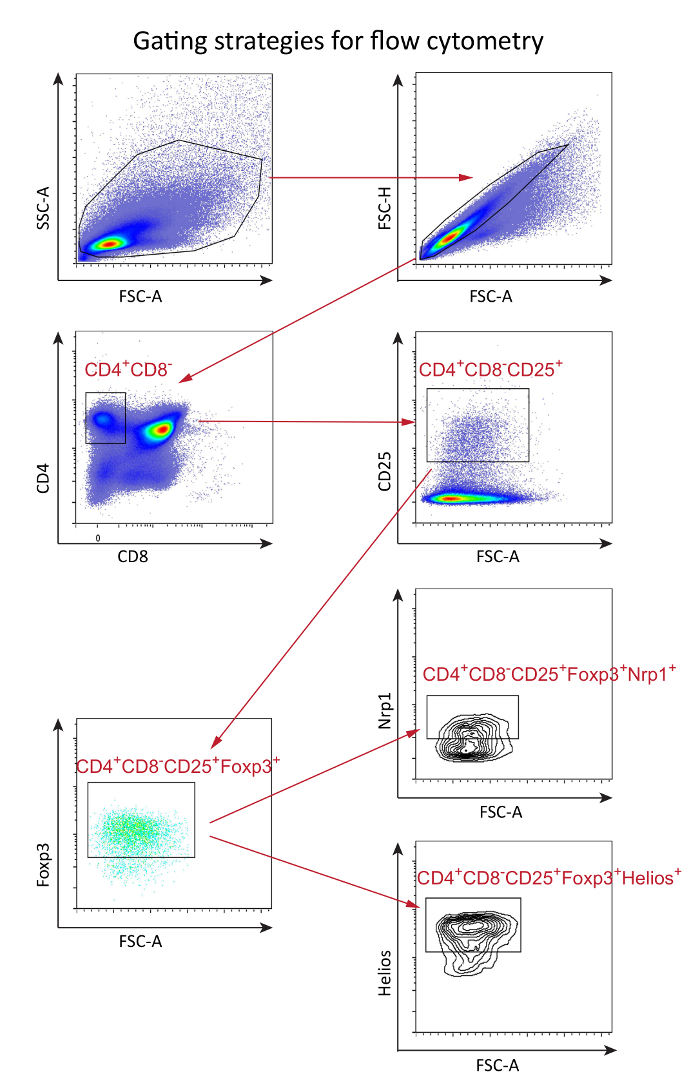 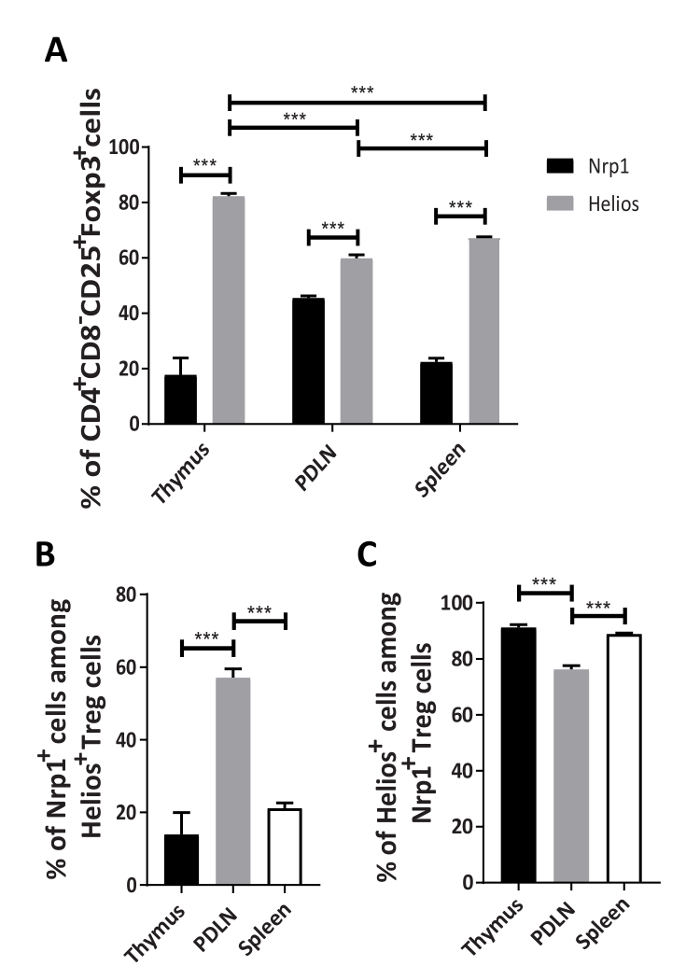 In this study, we isolated single cells from thymic glands, PDLNs and spleens of NOD mice, and investigated the expression of Helios and Nrp1 in CD4+CD8-CD25+Foxp3+ Treg cells using flow cytometry. In the present study, NOD mice were used, which is a murine model of type 1 diabetes. In a previous study, we have used the wild type mouse strains CD-1 and C57BL/6 mice to investigate whether Helios or Nrp1 is a better marker for distinguishing tTreg cells from pTreg cells. In that study, we used a similar protocol to determine the subsets of Treg cells in naïve mice9. We found that Helios is a better marker in this context. Therefore, herein we used normoglycemic NOD mice to confirm our earlier finding in this model and found that the results were consistent with our previous results10. This protocol provides an efficient, yet economical way to prepare single cells and subsequently use them for flow cytometric analysis. There are several published protocols in which single cells are prepared using an automatic dissociator11,12. Instead of using a dissociator, by squeezing the thymic glands and spleens manually and discarding the remaining capsule, we can avoid the presence of fibrous tissue in the cell suspension and make sure the cell suspension is mainly composed of immune cells and red blood cells. We then used NH4Cl to lyse the red blood cells. The duration of lysis can be extended for a few more minutes if the organs are larger than the normal size. However, the lysis duration should not be extended too much, otherwise immune cells will also be lysed. It is important to let the cell suspension go through a cap with cell strainer (or other equivalent cell filters), to prevent clog problems during flow cytometry.

Working in the dark is recommended when working with fluorochrome conjugated antibodies to avoid longer exposure to light. We incubate the cells on ice for extracellular and intracellular staining. The incubation can also be done at room temperature to allow a faster binding of antibodies, but there is a risk of unspecific binding.

Some intracellular markers require large numbers of cells to give good signals in flow cytometry. Given the small size of PDLNs, grinding them on a metal mesh requires more care to allow a maximal release of immune cells. Collecting more PDLNs is also a way to increase the cell number. Another limitation of this protocol is that the cells are fixed and permeabilized for flow cytometric analysis, thus they cannot be used for subsequent functional studies. Magnetic sorting is an option to allow functional studies if only surface markers are of interest.

This protocol has been applied in other mouse models of autoimmunity and cancer13,14. Single cell preparation is a basic but useful technique to determine the characteristics of immune cells in different immune organs. Using this method for single cell preparation might cause necrosis, which may result in decreasing the total number of cells. The spectral overlap of traditional flow cytometry limits the number of markers that can be detected at the same time. Therefore, several panels and large numbers of cells are required to acquire an overall immune profile. In the future, this can be overcome by the development of mass cytometry.

The present study was supported financially by the Swedish Research Council, EXODIAB, the Swedish Diabetes Foundation, the Swedish Child Diabetes Fund, SEB Diabetesfonden and O.E. och Edla Johanssons vetenskapliga stiftelse. Authors would also like to thanks Per-Ola Carlsson and Stellan Sandler for their supports and discussions.