The speed at which a reaction progresses is called the reaction rate. It measures the rate of reactants’ disappearance or the rate of products’ appearance and is expressed in units of molarity-per-second.

The average reaction rate can be calculated from the change in concentrations of reactants or products during a specific period of time. The molar concentration value is denoted in brackets, t stands for the period of time, and the delta symbol represents ‘change in’.

Since reactants are depleted during a chemical reaction, the value of concentration change of reactants is always negative. Therefore, a reaction rate calculated in terms of reactants is supplemented by a negative sign, to make the overall value positive.

The reaction rate at a given time point, or the instantaneous reaction rate, is measured by calculating the slope of a tangent drawn to the reaction curve, for either reactants or products, at the time of interest.

The slope value or the instantaneous rate at a specific time-point is equal for all reactants and products.

The reaction rate of a chemical reaction also reflects the actual stoichiometric coefficients of reactants and products.

Determining reaction rates is fundamental to studying chemical kinetics, which helps to understand how quickly a drug, catalyst, or a synthetic reaction works so that it can be better controlled and optimized in its function.

The mathematical representation of the change in the concentration of reactants and products, over time, is the rate expression for the reaction. The brackets indicate molar concentrations, and the symbol delta (Δ) indicates “change in.”

For example, the concentration of hydrogen peroxide, H2O2, in an aqueous solution changes slowly over time as it decomposes according to the equation:

The rate at which the hydrogen peroxide decomposes can be expressed in terms of the rate of change of its concentration:

The instantaneous rate of a reaction may be determined by one of the two ways. If experimental conditions permit the measurement of concentration changes over short time intervals, then the computation of average rates provide reasonably good approximations of instantaneous rates. Alternatively, a graphical procedure may be used. For instance, in the hydrogen peroxide decomposition example, by plotting the concentration of hydrogen peroxide against time, the instantaneous rate of decomposition of H2O2 can be computed at any time ‘t’ from the slope of a tangent drawn to the curve at that time. 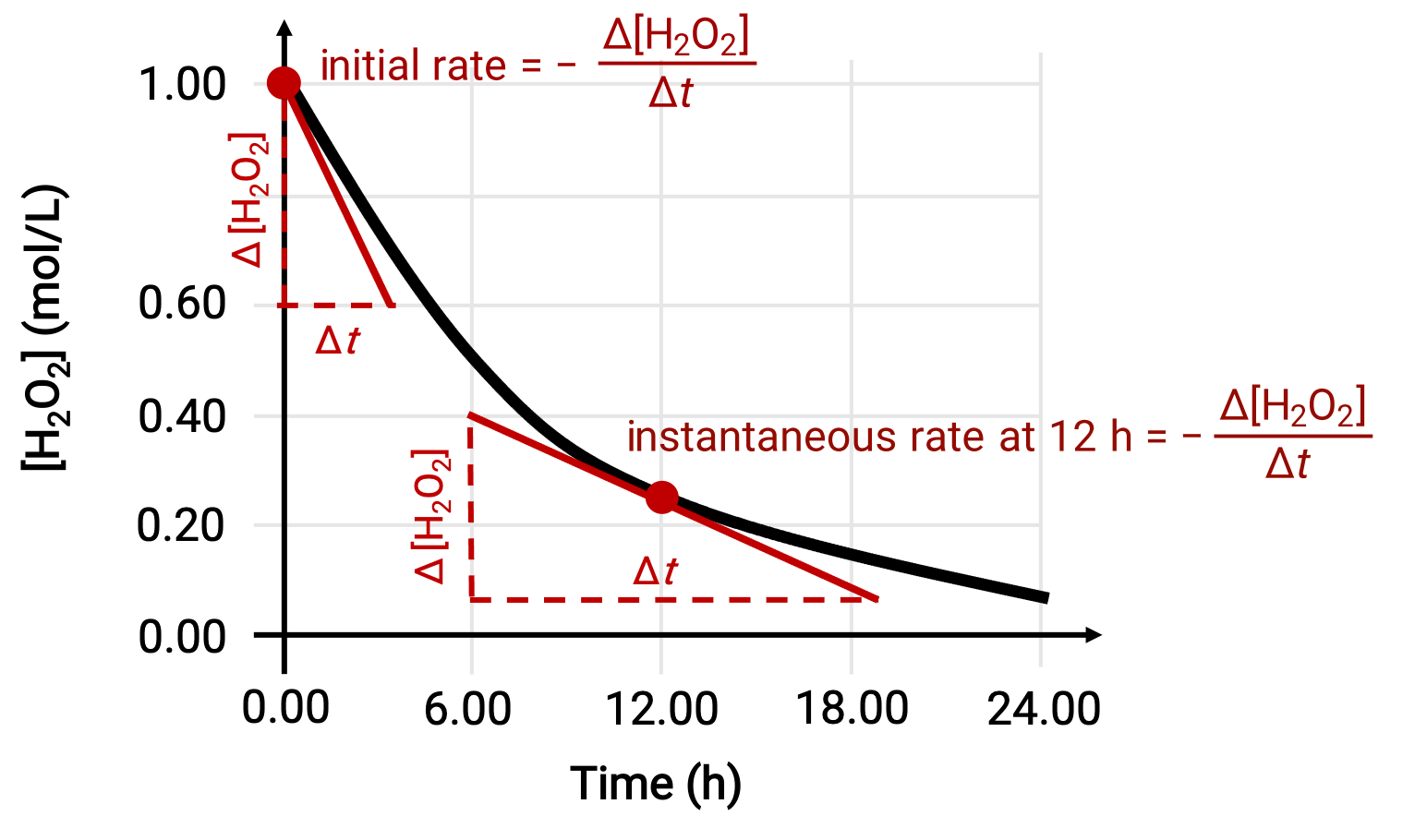 This graph shows a plot of concentration versus time for a 1.000 M solution of H2O2. The rate at any time is equal to the negative of the slope of a line tangent to the curve at that time. Tangents are shown at t = 0 h (“initial rate”) and at t = 12 h (“instantaneous rate” at 12 h).

Note that a negative sign has been included as a factor to account for the opposite signs of the two amount changes (the reactant amount is decreasing while the product amount is increasing).