The study of reaction mechanisms and kinetics helps researchers to optimize the speed of a reaction. An increase in temperature or concentration will accelerate the rate but can also lead to decomposition or side products when increased too much.

Alternatively, a chemical that accelerates the reaction rate without being permanently altered or consumed can be added to the reaction mixture. These substances are called catalysts and affect the rate constant by changing the activation energy.

Recall that the higher the activation energy, the slower the reaction rate. Hence, many chemical reactions, like the decomposition of aqueous hydrogen peroxide, progress slowly.

The addition of a catalyst lowers the activation energy by providing an alternative reaction mechanism without affecting the energy states of reactants and products.

There are two types of catalysts—homogeneous and heterogeneous.

A homogeneous catalyst exists in the same phase as the reactants. For instance, sodium bromide is added to aqueous hydrogen peroxide to accelerate its decomposition into gaseous oxygen and water.

For instance, the hydrogenation reaction of unsaturated ethene gas to ethane is accelerated by finely dispersed palladium on charcoal. Here, the catalyst exists in its solid-state, while reactants are in their gaseous forms.

When diffusing hydrogen atoms encounter adsorbed ethene molecules, they react to form saturated ethane. Subsequently, the products desorb and move away from the metal surface, leaving the intact catalyst behind. 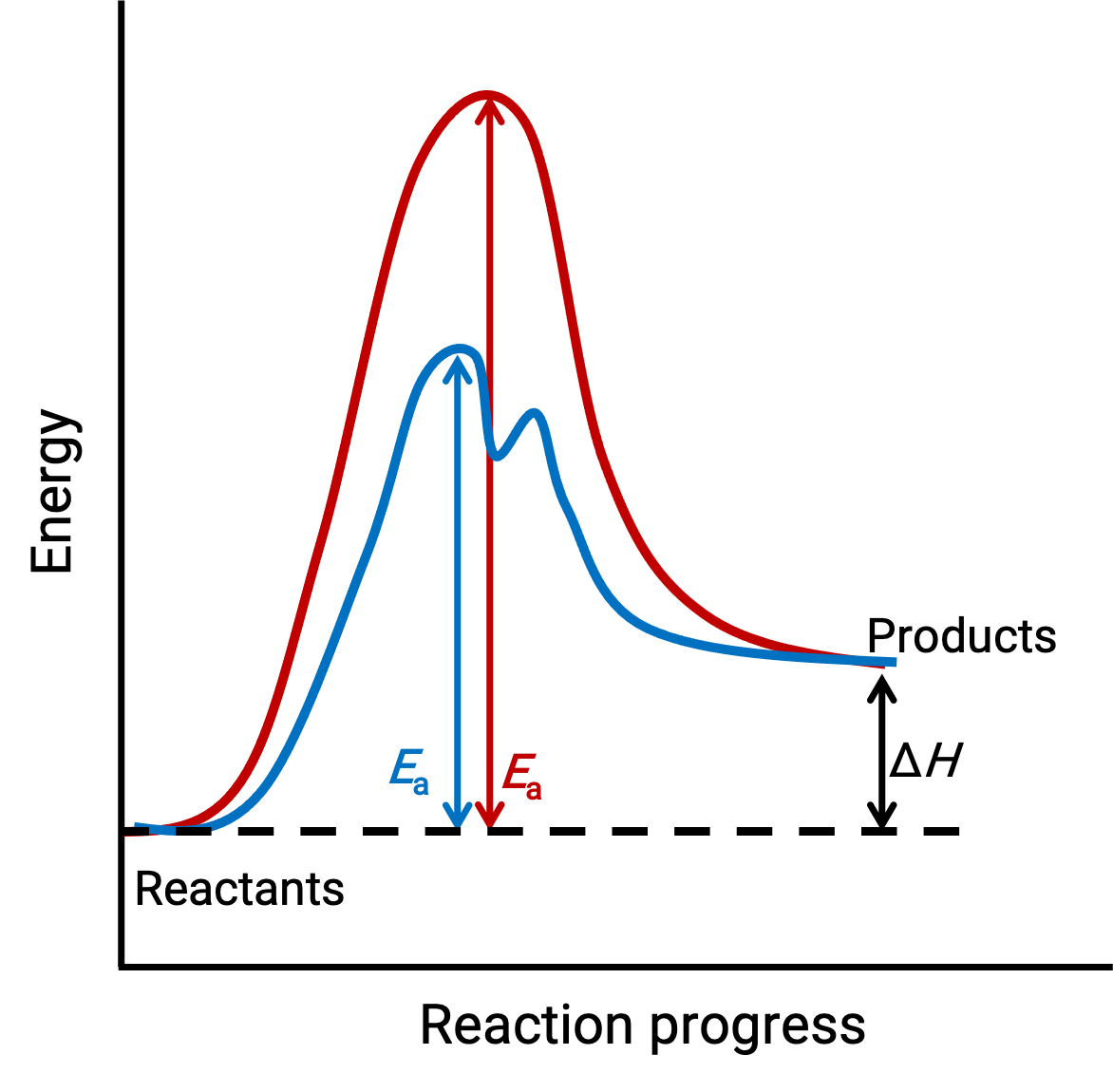 The illustrated image represents the reaction diagrams for an endothermic chemical process progressing in the absence (red curve) and presence (blue curve) of a catalyst.

Both curves represent the same overall reaction – they begin and end at the same energies. (In this case, products have more energy than reactants. Hence, the reaction is endothermic). However, their reaction mechanisms are different. The uncatalyzed reaction proceeds via a one-step mechanism (with only one observed transition state). In contrast, the catalyzed reaction follows a two-step mechanism (two transition states are observed) with notably lesser activation energy. This difference in the reaction pathways illustrates the catalyst’s role in providing an alternative reaction mechanism with lower activation energy, thereby accelerating reactions.

The catalyzed reaction mechanism does not need to involve a higher number of elementary steps than the uncatalyzed mechanism. However, it must provide an alternate reaction path whose rate-determining step is faster (with a lower Ea or activation energy).

A catalytic reaction may be categorized as homogeneous or heterogeneous, based on the physical states that catalysts and reactants exist during the catalytic process.

In homogeneous catalysis, the catalyst is present in the same phase as the reactants – solid, liquid, or gas. During the process, the catalyst interacts with the reactant to form an intermediate substance, which then decomposes or reacts with another reactant in one or more steps to regenerate the original catalyst and form the final product.

An example of homogeneous catalysis is the chemical process involving the decomposition of ozone occurring in the earth’s upper atmosphere. Ozone is a relatively unstable molecule that decomposes to yield diatomic oxygen. This decomposition reaction is consistent with the following two-step mechanism:

In the catalyzed reaction, notice that NO is a reactant in the first step of the mechanism and a product in the last step. This is another characteristic trait of a catalyst: Though it participates in the chemical reaction, it is not consumed by the reaction. Additionally, in this homogeneous catalysis, both the reactant and the catalyst exist in a gaseous phase.

In heterogeneous catalysis, the catalyst is present in a different phase (usually a solid) than the reactants. Such catalysts generally function by furnishing an active surface upon which a reaction can occur. Gas and liquid phase reactions catalyzed by heterogeneous catalysts occur on the catalyst's surface rather than within the gas or liquid phase.

This text is adapted from Openstax, Chemistry 2e, Section 12.7: Catalysis.