We present various ways to monitor heart function in the larva of Drosophila for assessing questions dealing with the function of gap junctions, ion channel mutations, modulation of pacemaker activity and pharmacological studies.

We present various methods to record cardiac function in the larval Drosophila. The approaches allow heart rate to be measured in unrestrained and restrained whole larvae. For direct control of the environment around the heart another approach utilizes the dissected larvae and removal of the internal organs in order to bathe the heart in desired compounds. The exposed heart also allows membrane potentials to be monitored which can give insight of the ionic currents generated by the myocytes and for electrical conduction along the heart tube. These approaches have various advantages and disadvantages for future experiments that are discussed. The larval heart preparation provides an additional model besides the Drosophila skeletal NMJ to investigate the role of intracellular calcium regulation on cellular function. Learning more about the underlying ionic currents that shape the action potentials in myocytes in various species, one can hope to get a handle on the known ionic dysfunctions associated to specific genes responsible for various diseases in mammals.

The cellular mechanisms in the function of the heart for both insects and vertebrates are amazingly similar. Drosophila melanogaster are being used for investigating gene mutations that are responsible for disease states in other animals including humans (Bier and Bodmer, 2004; Peron et al., 2009). Now various diseases are being induced in this tractable genetic organism (Dowse et al., 1995; Johnson et al., 1998; Ganetzky, 2000; Bier and Bodmer, 2004; Ocorr et al., 2007a, b) and with the hope that in time gene therapy can be tested for regain of normal function. In addition Drosophila serve as a good model for physiological function at a cellular level.

Many of the past studies on Drosophila heart have been targeted toward developmental aspects in the embryo (Azpiazu and Frasch 1993, Bodmer 1993, Bodmer et al. 1990). A few studies of physiological function occurred in the pre-pupal, pupal or adult stages (Ashton et al., 2001; He and Adler, 2001; Molina and Cripps, 2001; Ponzielli et al., 2002; Sláma and Farkaš, 2005; Wessells and Bodmer, 2004). However the pupal stage is one of metamorphosis and changing hormones as well as fluctuating various biogenic amines. Also the heart is undergoing structural transformation which can prove to be difficult to control for variables when investigating physiology of the myocytes (Dulcis et al. 2005; Johnson et al. 2002; Miller, 1997; Papaefthimiou and Theophilidis, 2001). The heart is known to be myogenic in the larval stage and can readily be removed or left in situ while being bathed by a defined physiological saline to limit compounding variables such as circulating hormones or peptides (Dowse et al. 1995; Johnson et al. 1997; Dasari and Cooper, 2006; Feng et al. 2004). The myogenic nature of the larval heart is comparable to the mammalian heart in that there are pacemakers that drive the rest of the heart to pump fluid in a direction to be effective in bathing organs. The chronotropic and ionotropic nature of the Drosophila larval heart is of interest since it could serve as a rapid means to test fundamental principles and pathological effects for mammalian heart function as well as a helping to develop a comparative model for cellular physiology such as ionic regulation of pacemaker cells.

The larval heart is very susceptible to biogenic amines and peptides which vary in the hemolymph depending on food source or intrinsic state of the animal (Dasari and Cooper, 2006; Johnson et al. 1997, 2000; Nichols et al. 1999; Zornik et al. 1999). Addressing how endogenous or exogenous compounds influence the heart mechanistically is of interest. Possibly novel insecticides with fewer effects on other organisms can be developed if we gain a better understanding of insect physiology and pharmacology.

The cellular mechanism of action of the neurotransmitters and cardiac modulators in larva have not been described to date as there has not been sufficient understanding of the ionic currents and channel types present in the larval heart that contribute and regulate pacemaker activity. As far as we are aware, there are no reports documenting extracellular or intracellular recordings of myocytes to assess ionic currents to address the mechanistic effects of modulators in larval Drosophila.

In this report we present various methods to record heart rate and physiological properties of the larval heart.

If one is not interested in freeing the larvae for experimentation one could use the permanent method of restraining the larva by gluing the animal to a glass slide. With use of super glue method, the animal can eat and even be covered in a moist solution while remaining adhered to the glass cover slip. The procedures are:

The preparations are slit along the mid-ventral longitudinal axis and pinned flat. The preparation dish consisted of a glass slide (VWR) with magnetic tape (Best Buys retail out-let) adhered to one side. A hole in the center of the magnetic strip allows the preparation to be viewed with transmitted light. Dissecting pins (Fine Scientific Tools, WA) are bent and glued to paper clips. The paper clips are easily maneuvered on the magnetic tape to hold the filleted preparation in place. This type of recording dish has been previously described for utilization of pinning ganglia isolated from the leech ventral nerve cord (Muller et al., 1981).

The heart is now exposed and ready for exposure to experimental conditions. 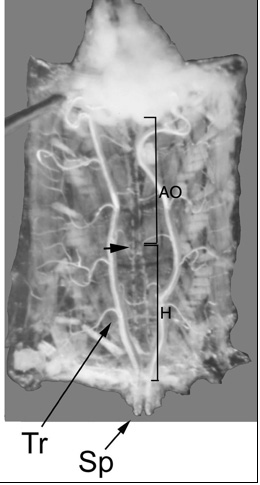 Figure 2. Ventral dissection of a 3rd instar to view the heart directly. Pinning of the animal on its back after dissection is used to directly apply the compounds on the heart with or without the CNS intact. Small arrow indicates where the heart and aorta are separated for transected dorsal vessel studies (see below). Tr, Trachea; Sp, Spiracles; H, Heart; AO, Aorta.

This dissection technique has been used to directly assess pharmacological agents on the heart of Drosophila larvae (Gu and Singh, 1995). The dissection time is 3-6 min. The preparation is allowed to relax while bathed in HL3 saline for 3-5 min after dissection.

The HL3 saline was carefully controlled to be at pH 7.2 since HR slows at high pH and speeds up at lower pH (Badre et al., 2005). Gu and Singh (1995) used pH 7.0 for the pharmacological analysis of the heart and also showed maintained viability. During these trials the saline remained aerated by agitation of solution through repetitively injecting saline, through a 21-gauge needle, into a beaker.

To quantify HR either direct observations can be used or the images can be recorded on to VHS tapes or a digital camera for playback on a screen. A photodiode method has previously been described (Dasari and Cooper, 2006).

One can use what every heat pulse and temperature required for their experimentation.

Electrically drive the heart to pace:

Direct counting of heart rate and monitoring electrical events is possible. Altering the bathing media while recording these potentials is also feasible to asses the effects on the field potentials.

To monitor the transmembrane potentials of the myocytes a region of heart is impaled with sharp intracellular electrode (20 to 30 mOhm resistance) filled with 3 M KCl. A standard head stage and amplifier for intracellular recording can be used; however we used a model Axonclamp 2B (Molecular Devices, Sunnyvale, CA, USA) amplifier and 1 X LU head stage. It appears that the caudal end of the heart is more rigid and this is where the pacemaker cells reside since contraction initiates in this region the majority of the time (Badre et al., 2005; Dasari and Cooper 2006; Dasari et al., 2007).

Funding provided by the G. Ribble Fellowships in the Dept of Biology, the Kentucky Young Researchers and Undergraduate Education-eUreKa! Office (Univ. of KY). 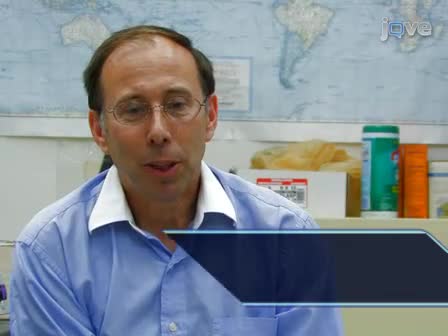