Evaluating two-dimensional (2D) crystallization trials for the formation of ordered membrane protein arrays is a highly critical and difficult task in electron crystallography. Here we describe our approach in screening for and identifying 2D crystals of predominantly small membrane proteins in the range of 15 – 90kDa.

Electron crystallography has evolved as a method that can be used either alternatively or in combination with three-dimensional crystallization and X-ray crystallography to study structure-function questions of membrane proteins, as well as soluble proteins. Screening for two-dimensional (2D) crystals by transmission electron microscopy (EM) is the critical step in finding, optimizing, and selecting samples for high-resolution data collection by cryo-EM. Here we describe the fundamental steps in identifying both large and ordered, as well as small 2D arrays, that can potentially supply critical information for optimization of crystallization conditions.

While 2D crystals of membrane proteins are most commonly grown by reconstitution by dialysis, the screening technique is equally applicable for crystals produced with the help of monolayers, native 2D crystals, and ordered arrays of soluble proteins. In addition, the methods described here are applicable to the screening for 2D crystals of even smaller as well as larger membrane proteins, where smaller proteins require the same amount of care in identification as our examples and the lattice of larger proteins might be more easily identifiable at earlier stages of the screening.

The example shows 2D crystals of a small membrane protein of 18kDa that are up to several microns in size. Spots on the FT are easily identified and sharp. The movement of the live-FT box shows that the lattice is continuous without mosaicity. The lattice of a larger protein with a more extensive soluble domain can be identified on the small screen of the EM. CCD image collection and FT is necessary to provide a means of better assessment and to gain information on, e.g., possible mosaicity (show FT). When calculating an FT of a proteoliposome that is not ordered, noise can initially be mistaken for spots. While the box for the live-FT is moved, however, the spots will disappear. On the other hand, small arrays, with questionable crystallinity, will have their spots remaining stationary when the live-FT is moved even slightly over the image area. Furthermore, these small crystals can be recognized by usually having the same unit cell sizes, and distances between spots in different FTs can be measured in various ways, such as with a circle of a specific size. Lipid crystals display a distinct lattice morphology and FT.

Poor results in evaluating samples are sometimes connected to a low membrane concentration that prevents proper and fast screening. This can frequently be overcome with the use of a higher protein concentration for 2D crystallization by dialysis. Alternatively, the membranes can be left to settle for a few days at the bottom of the Eppendorf tube during storage. In some cases rapid, or almost instant settling of membranes occurs and pipetting from the bottom of the tube will result in a higher membrane density on the grid. Another much faster option is centrifugation (at 3000-8000 rpm for 1-3 minutes) of samples with subsequent sampling from the bottom of the tube.

Samples under optimal conditions will contain a large percentage of 2D crystals. It is not necessary to aim for a homogeneous appearance of membranes, as the largest and most well-ordered 2D crystals are selected visually for data collection. These types of samples will be easily recognized when the crystallization trials are repeated as well as when the samples are used for cryo-EM data collection, resulting in a maximum number of high resolution images. 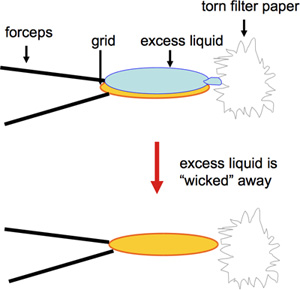 Figure 1. This figure shows blotting the edge of the grid with a torn piece of Whatman #4 filter paper.

Proper evaluation of samples requires careful assessment of a sufficient number of membranes. For example, samples with as low as 2% crystalline arrays out of over 180 imaged proteoliposomes gave critical information for quick optimization of 2D crystallization conditions 7.

When precipitation of the protein occurs, a grid might be abandoned from further screening after inspection at low magnification, although occasional partial precipitation of protein occurs. Even very small membranes of less than 100 nm can give helpful information about order though, and parameters to increase the 2D crystal size can be implemented in the following dialysis experiments.

Laboratories are in the process of introducing various degrees of promising automation into the process of screening 8,9. Yet samples will still require steps of evaluation and knowledge of the 2D crystal size, morphology, and order as outlined here. In the future, it might become possible to analyze data of increasingly smaller 2D crystals to higher resolution, making these screening steps and the more difficult evaluation of smaller crystalline areas even more critical.

We thank our collaborators for providing valuable protein samples, which contributed to some of our methods related experience and observations. Günther Schmalzing kindly provided the opportunity to FR to join this project. Barbara Armbruster, Jacob Brink and Deryck Mills are thanked for their outstanding help and input on equipment. Funding was provided by NIH grant HL090630. 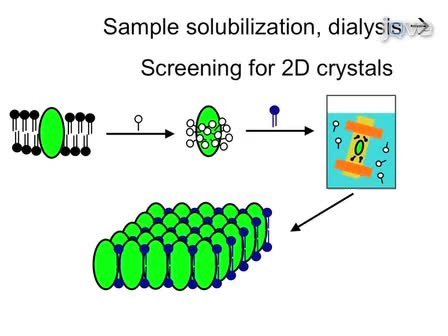