The procedure described in this protocol shows that testosterone administration and folk beliefs about testosterone may be associated with directly opposed social behaviors.

We therefore set up an experimental environment, in which status can only be achieved by prosocial means. In a double-blind and placebo-controlled experiment, we administered a single sublingual dose of 0.5 mg of testosterone (with a hydroxypropyl-β-cyclodextrin carrier) to 121 women and investigated their social interaction behavior in an economic bargaining paradigm. Real monetary incentives are at stake in this paradigm; every player A receives a certain amount of money and has to make an offer to another player B on how to share the money. If B accepts, she gets what was offered and player A keeps the rest. If B refuses the offer, nobody gets anything. A status seeking player A is expected to avoid being rejected by behaving in a prosocial way, i.e. by making higher offers.

The results show that if expectations about the hormone are controlled for, testosterone administration leads to a significant increase in fair bargaining offers compared to placebo. The role of expectations is reflected in the fact that subjects who report that they believe to have received testosterone make lower offers than those who say they believe that they were treated with a placebo. These findings suggest that the experimental economics approach is sensitive for detecting neurobiological effects as subtle as those achieved by administration of hormones. Moreover, the findings point towards the importance of both psychosocial as well as neuroendocrine factors in determining the influence of testosterone on human social behavior.

An indication that your results are valid is if the average offers observed is similar to what other studies found. Typically, average offers are between 30 - 40% of the total amount and approximately half of the subjects offer the equal share14. On the other hand, a likely indicator that subjects did not understand the rules of the game is if offers of more than 50% are observed. It is worth noting, however, that there is considerable heterogeneity in the distribution and average offers observed in studies around the world15.

As in all behavioral economics experiments16, sincerity and credibility are important facets. If by the end of the procedure, subjects believe they have been or might have been tricked, deceived or misled, this is a strong indication that something went wrong in the procedure and the plausibility of any results is cast into doubt. An important aspect of achieving credibility and avoiding doubts is the correct implementation of incentives. Similarly, anonymity and subjects' belief in anonymity are further vital criteria of any successful experiment. Since the number of subjects is relatively small in behavioral economics experiments (around 30 - 60 per treatment) it is important to check the randomization into the treatment groups. Ideally, the distributions of important personality variables are similar in the different treatment groups (in our case the testosterone and placebo group). If the distributions are not similar one has to take this into account in the statistical analysis of the data.

Our results show that the experimental procedure is successful in that subjects who are expected to behave in a standard manner (i.e. those who received placebo) make decisions that are in line with standard ultimatum game behavior. Furthermore, the approach described herein has proven to be sensitive to pharmacological challenges as subtle as those achieved by testosterone administration (figure 1). Finally, we show that expectations about the impact of a substance on behavior seems to have a powerful influence in social decision making situations: those who believed to have received testosterone make substantially lower offers than those who believed to have received placebo (compare the distributions in left and right panel of figure 1) 17.

This work was supported by a grant from the Swiss National Science Foundation (CE: PBEZP3-131154) 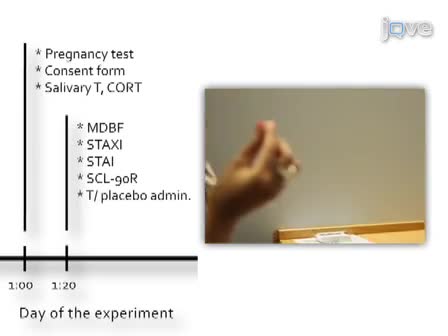