We provide a method for isolating and culturing pure populations of heart valve endothelial cells (VEC). VEC can be isolated from either side of the cusp or leaflet and immediately following, underlying interstitial cell (VIC) isolation is straightforward.

Heart valves are solely responsible for maintaining unidirectional blood flow through the cardiovascular system. These thin, fibrous tissues are subjected to significant mechanical stresses as they open and close several billion times over a lifespan. The incredible endurance of these tissues is due to the resident valvular endothelial (VEC) and interstitial cells (VIC) that constantly repair and remodel in response to local mechanical and biological signals. Only recently have we begun to understand the unique behaviors of these cells, for which in vitro experimentation has played a key role. Particularly challenging is the isolation and culture of VEC. Special care must be used from the moment the tissue is removed from the host through final plating. Here we present protocols for direct isolation, side specific isolation, culture, and verification of pure populations of VEC. We use enzymatic digestion followed by a gentle swab scraping technique to dislodge only surface cells. These cells are then collected into a tube and centrifuged into a pellet. The pellet is then resuspended and plated into culture flasks pre-coated with collagen I matrix. VEC phenotype is confirmed by contact inhibited growth and the expression of endothelial specific markers such as PECAM1 (CD31), Von Willebrand Factor (vWF), and negative expression of alpha-smooth muscle actin (α-SMA). The functional characteristics of VEC are associated with high levels of acetylated LDL. Unlike vascular endothelial cells, VEC have the unique capacity to transform into mesenchyme, which normally occurs during embryonic valve formation1. This can also occur during significantly prolonged post confluent in vitro culture, so care should be made to passage at or near confluence. After VEC isolation, pure populations of VIC can then be easily acquired.

4. Preparation of 60 mm Culture Dish for Side Specific Isolation

5. Isolation of Side Specific Endothelial Layer 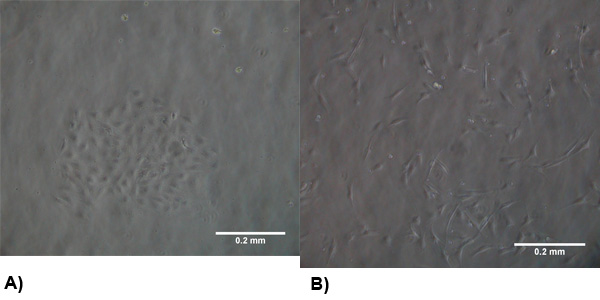 Figure 1. The morphology of isolated cells at 2-3 days post isolation. (A) VEC exhibit a typical endothelial morphology and form clusters to promote growth . (B) VIC morphology is similar to myofibroblasts which are generally spindle shaped and spread evenly throughout the flask. 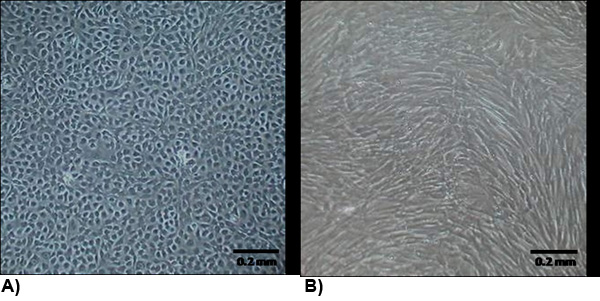 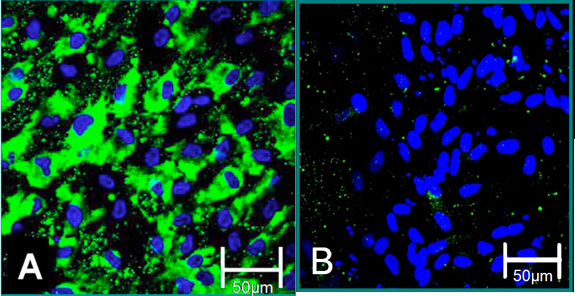 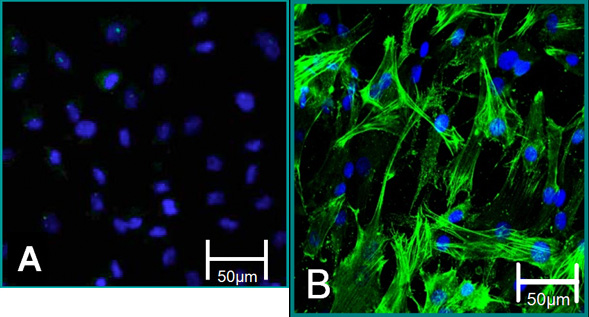 An understanding of valvular biology has been impaired by technical difficulties isolating and culturing pure populations of valvular endothelial cells. Typical isolation techniques involve enzymatic digestion of the underlying basal matrix or chemical dissociation of endothelial adhesive bonds2,3. Preliminary isolation experiments were qualitatively assessed by varying dissociation agents and incubation periods. The results of these experiments showed that EDTA (or Trypsin-EDTA) incubation for up to 60 minutes was unsuccessful at dislodging cells. However, a collagense digestion for 5-10 minutes proved effective for retrieving a usable number of pure valvular endothelial cells (Table 1). Other enzyme solutions have been suggested such as supplementing with dispase, a metalloprotease capable to specifically target collagen type IV and fibronectin which are main components of the underlying matrix4. Liberated cells can be purified through additional processing such as clonal expansion or magnetic selection methods5.

Recent evidence has suggested that the aortic valve contains a very heterogeneous distribution of cell types which may lead to difficulties when assessing cellular phenotypes. In contrast to vascular endothelium, VEC should also align perpendicular to the direction of fluid flow6. Transcriptional profiles of VEC are dependent upon both the side specificity and mechanical environment. Aortic versus ventricular side endothelium were identified as having distinct endothelial phenotypes in vivo. The gene expression profiles suggest that the endothelium on the aortic side valve is prone to calcification side but protected against inflammatory initiation by antioxidative mechanisms7. In the presence of shear flow, the endothelial cells down regulated calcific genes such as BMP-4 and POSTN to retain their quiescent phenotype. Shear flow seems to act as a protective measure for endothelial cell types from chondro/osteogenic differentiation, which is a possible explanation of the ventricular endothelial protection8.

Clonal isolations from human pulmonary aortic valves have suggested a spectrum of endothelial progenitors exist expressing different amounts of α-SMA, CD144, and CD31. Some were shown to transition to a mesenchymal phenotype, analogous to EMT, specifically in response to TGFB2 at varying degrees9. Clonal isolation prove to be an effective way of purifying cell populations, but selects for specific subpopulations that may have phenotypic uniqueness that is not generalizable. This is very important for surface endothelium, as many other cell types are present in nonzero quantities. These include circulating endothelial cells, bone marrow derived cells, and monocytes, all of which can express one or more endothelial-like characteristics10, 11. In addition, clonal isolates undergo many cell divisions to reach suitable cell numbers for experiments, at which point many non-progenitor phenotypes will have senesced or dedifferentiated. Therefore, primary cell isolation such as described here gives the best representation of the native valve endothelial population. The challenge will be to ascertain whether sub-phenotypes that emerge are intrinsic or emerge from differential responses to external stimuli. With this approach, one should be able to determine relative prevalence of each and their consequences in response to specific treatments.

Magnetic sorting methods have also provided a way of purifying cell populations but, are highly dependent upon the antibody labeling conditions and derived cell population. With the ever increasing understanding valve cell populations, endothelial markers such as CD31, CD144, and negative α-SMA may not be sufficient to sort for a pure valvular population. Clonal isolations have proved that endothelial cells contain a wide spectrum of marker expression leading to possible inaccuracies with sorting. When endothelial cells sorted were sorted for CD31, sample purity increased to almost 96%. However, interstitial cells began to reappear in cultures grown one day post-confluence4. Although magnetic sorting is an option, one should consider sorting for additional markers and expression levels such as positive for CAD-11 and negative for periostin6.

We provide a method for isolating and culturing pure populations of heart valve endothelial cells (VEC). Using this method, additional processing such as clonal isolation and magnetic selection methods can be eliminated to achieve a representative population of side specific endothelial cells. Cell morphology, functional characteristics, multiple markers, and expression levels should all be considered when assessing the population.

This research is supported by the NSF CAREER award, the Hartwell Foundation, and the American Heart Association (#0830384N). 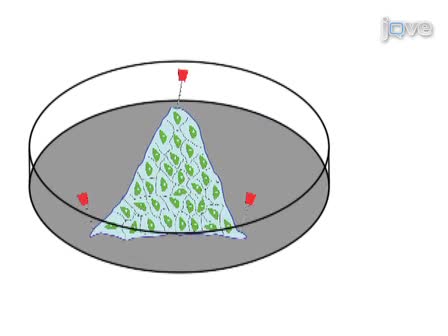