We demonstrate how to implement a behavioral pharmacology method in an appetitive olfactory conditioning paradigm in honeybees (Apis mellifera) by systemic application of drugs. This method allows investigation of the mechanisms underlying learning and memory formation in a simple and reliable way.

Honeybees (Apis mellifera) are well known for their communication and orientation skills and for their impressive learning capability1,2. Because the survival of a honeybee colony depends on the exploitation of food sources, forager bees learn and memorize variable flower sites as well as their profitability. Forager bees can be easily trained in natural settings where they forage at a feeding site and learn the related signals such as odor or color. Appetitive associative learning can also be studied under controlled conditions in the laboratory by conditioning the proboscis extension response (PER) of individually harnessed honeybees3,4. This learning paradigm enables the study of the neuronal and molecular mechanisms that underlie learning and memory formation in a simple and highly reliable way5-12. A behavioral pharmacology approach is used to study molecular mechanisms. Drugs are injected systemically to interfere with the function of specific molecules during or after learning and memory formation13-16.

Here we demonstrate how to train harnessed honeybees in PER conditioning and how to apply drugs systemically by injection into the bee flight muscle.

1. Catching Bees from the Hive

2. Transferring Bees from the Pyramid Into Glass Vials

The time point of systemic injection depends on the experimental design.

9. Feeding Bees During the Experiment

In the first experiment we look at the impact of systemic injection of phosphate-buffered saline (PBS; in mM: 137 NaCl, 2,7 KCl, 10,1 Na2HPO4, 1,8 KH2PO4, pH 7,2) on learning and long-term memory formation. Three groups of bees were trained with three CS-US pairings with an inter-trial interval of 10 min: a non-treated group, a group that was injected with 1 μL PBS 30 min before training, and a sham-injected group treated the same way as the PBS-injected group but without injecting PBS. 24 h after training memory was tested with one CS presentation in all three groups. The percentage of animals showing the conditioned response during conditioning increases significantly across the three training trials (Fig.1, ANOVA for repeated measurement for the factor time F2,378=340,456, p < 0,05). No difference in PER could be observed between the three groups during conditioning (ANOVA for repeated measurement for the factor groups F2, 189 = 1,299, p > 0,05). This holds true for a 24 h retention test (F2, 187 = 0,752, p>0,05) when comparing non-treated animals with PBS-injected and sham-injected animals.

In the second experiment we demonstrate the inhibition of memory retention three and four days after training when the protein synthesis inhibitor anisomycin (10 mM) was systemically injected 30 min after three CS-US pairings. Comparison of an anisomycin-injected group with an PBS-injected group reveals a significant difference between groups during the retention test (Fig.2, ANOVA for repeated measurement for the factor group F1, 94=8,86, p < 0,05). A major difference can be observed at the memory test on day 3 and day 4. This resembles the results of Wüstenberg et al.18, who also conditioned bees with three CS-US pairings, albeit with a different protocol. 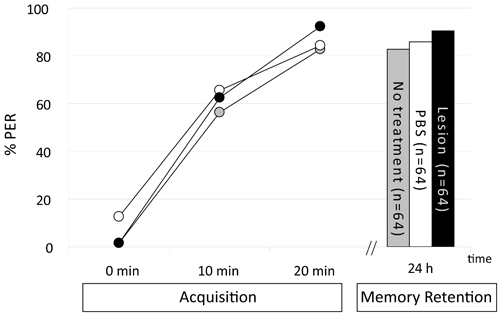 Figure 1. Cuticula lesion or injection of PBS does not alter aquisition and memory retention. Animals were trained with three CS-US pairings (acquisition). After 24 h, memory was tested (Memory Retention). Thirty minutes prior to training, a hole was made in the cuticula of two groups (lesion, PBS) and one of these groups was injected with 1 μL PBS (PBS). A third group was left intact (no treatment). Presented is the percentage of animals for each group responding to odor presentation with a PER. An ANOVA does not reveal any significant differences between groups in the acquisition phase (F2, 189 = 1.299, p > 0.05) or in memory retention (F2, 187 = 0.752, p>0.05). 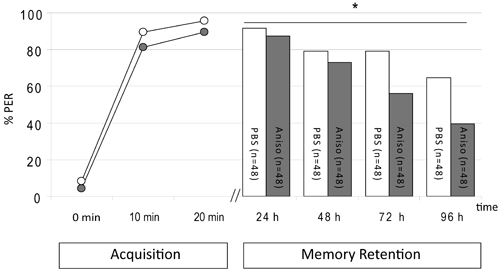 Figure 2. Injection of anisomycin 40 min after the last CS-US pairing reduces memory retention three days and four days after training. Animals were trained with three CS-US pairings (acquisition) and injected with 1 μL 10 mM anisomycin (Aniso) or 1 μL PBS 1 h after the first training trial. Memory was tested (Memory Retention) 24 h, 48 h, 72 h and 96 h later. Presented is the percentage of animals per group responding to odor presentation with a PER. The injection of anisomycin leads to a significant reduction of memory retention 72 h and 96 h after training (F1, 94=8.86, p < 0.05) as revealed by an ANOVA.

This work was supported by a grant from the German Federal Ministry of Education and Research (BMBF) within the Bernstein Focus: Neuronal Basis of Learning (BFNL) to D.E. We thank Randolf Menzel for valuable comments on an earlier version of the manuscript. 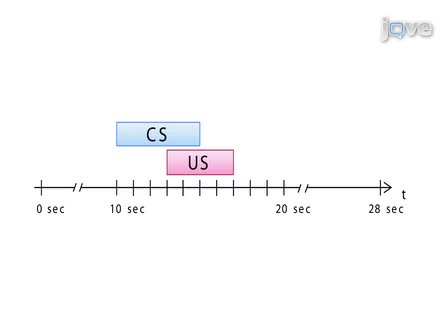