Here we describe an efficient strategy to remove the silk-producing glands from the abdomen of female black widow spiders. This procedure allows the rapid isolation of the seven distinct silk-producing glands in a highly purified fashion, an important process for investigators studying spider silk production and fiber assembly.

Modern spiders spin high-performance silk fibers with a broad range of biological functions, including locomotion, prey capture and protection of developing offspring 1,2. Spiders accomplish these tasks by spinning several distinct fiber types that have diverse mechanical properties. Such specialization of fiber types has occurred through the evolution of different silk-producing glands, which function as small biofactories. These biofactories manufacture and store large quantities of silk proteins for fiber production. Through a complex series of biochemical events, these silk proteins are converted from a liquid into a solid material upon extrusion.

Mechanical studies have demonstrated that spider silks are stronger than high-tensile steel 3. Analyses to understand the relationship between the structure and function of spider silk threads have revealed that spider silk consists largely of proteins, or fibroins, that have block repeats within their protein sequences 4. Common molecular signatures that contribute to the incredible tensile strength and extensibility of spider silks are being unraveled through the analyses of translated silk cDNAs. Given the extraordinary material properties of spider silks, research labs across the globe are racing to understand and mimic the spinning process to produce synthetic silk fibers for commercial, military and industrial applications. One of the main challenges to spinning artificial spider silk in the research lab involves a complete understanding of the biochemical processes that occur during extrusion of the fibers from the silk-producing glands.

Here we present a method for the isolation of the seven different silk-producing glands from the cobweaving black widow spider, which includes the major and minor ampullate glands [manufactures dragline and scaffolding silk] 5,6, tubuliform [synthesizes egg case silk] 7,8, flagelliform [unknown function in cob-weavers], aggregate [makes glue silk], aciniform [synthesizes prey wrapping and egg case threads] 9 and pyriform [produces attachment disc silk] 10. This approach is based upon anesthetizing the spider with carbon dioxide gas, subsequent separation of the cephalothorax from the abdomen, and microdissection of the abdomen to obtain the silk-producing glands. Following the separation of the different silk-producing glands, these tissues can be used to retrieve different macromolecules for distinct biochemical analyses, including quantitative real-time PCR, northern- and western blotting, mass spectrometry (MS or MS/MS) analyses to identify new silk protein sequences, search for proteins that participate in the silk assembly pathway, or use the intact tissue for cell culture or histological experiments.

1. Anesthetizing the spider and isolation of the abdomen

2. Removal of the exoskeleton

3. Isolation of the silk-producing glands

When removing the different glands, extreme care should be taken while handling the flagelliform and aggregate glands, as these two structures can be easily punctured and damaged with the forceps. Furthermore, it is worth noting that morphologically the flagelliform and aggregate glands look very similar prior to their removal and they are often intertwined with each other. To prevent cross-contamination of these tissues upon removal, the dissector should carefully tease these structures apart. Additionally, upon the initial exposure of the silk-producing glands, the aciniform and pyriform glands will be the most difficult to immediately visualize due to their smaller size and anatomical location. Often there is the presence of many eggs. Moreover, additional care needs to be taken when removing the pyriform gland, as this tissue is extremely sticky and will often adhere to your forceps. When this procedure is done properly, it is possible to obtain all seven silk-producing glands from a single spider in a highly purified manner. Typically, one can recover microgram quantities of total RNA and protein from a single spider dissection. An example of using the total RNA for qPCR to examine the mRNA levels of a tubuliform restricted fibroin gene, TuSp1, is shown (Figure 4). Representative experiments that involve protein lysates collected from the glands e.g. in-solution tryptic digestion followed by MS analysis (could also be used for MS/MS analysis) or an amino acid composition analysis is shown (Figure 5-6, respectively). 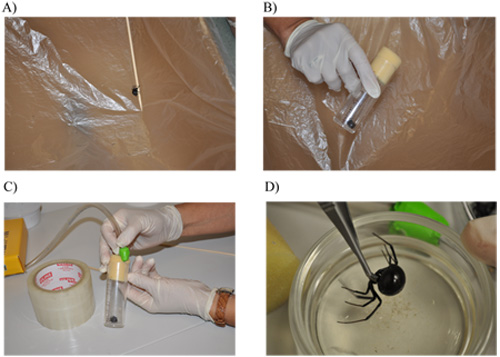 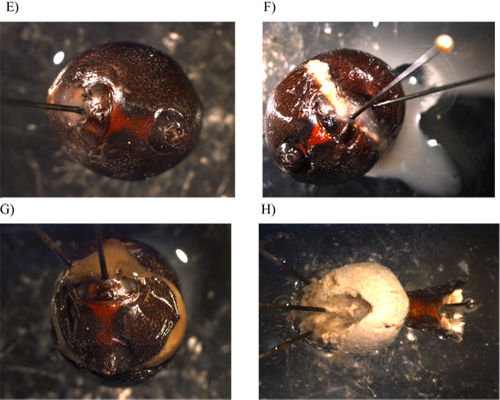 Figure 1. Handling, anesthetizing, and removal of the exoskeleton from the abdomen of a female black widow spider. A) Transfer of the spider into a cardboard box lined with plastic to facilitate moving the spider into a smaller plastic vial. B) Spider placed into a plastic vial with plug. C) Anesthetizing the spider with carbon dioxide gas. D) Separation of the cephalothorax from the abdomen using microscissors. E) Immobilization of the abdomen in the dissecting tray using insect pins. F) View after a lateral incision is made with the scissors and a portion of the exoskeleton is pealed back with forceps. G) Incisions being made perpendicular to the initial lateral cut. H) Removal of the exoskeleton and exposure of the fat layer. 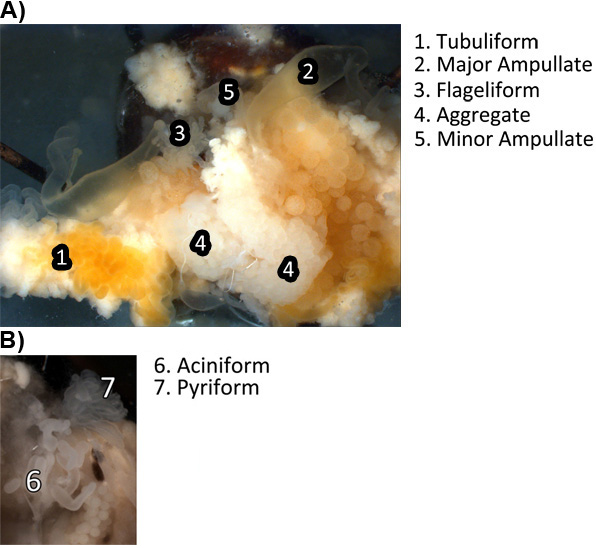 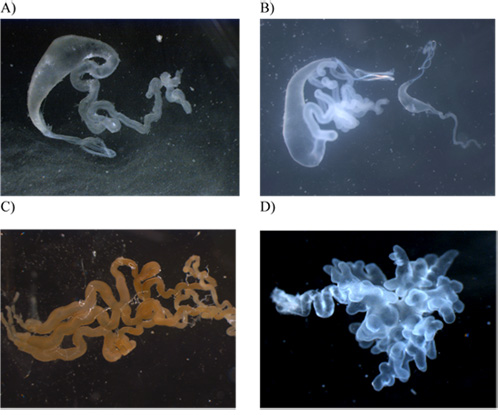 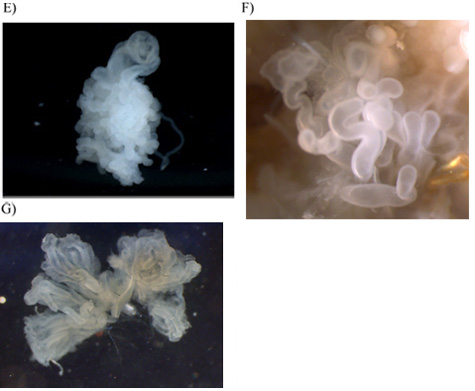 Figure 3. Photographs of the seven silk-producing glands after their removal from the abdomen. All images were captured at 20X magnification with the exception of the aciniform and pyriform glands, which were done at 40X. A) major ampullate gland; B) major and minor ampullate (right side) for size comparison; C) tubuliform; D) flagelliform; E) aggregate; F) aciniform; G) pyriform. 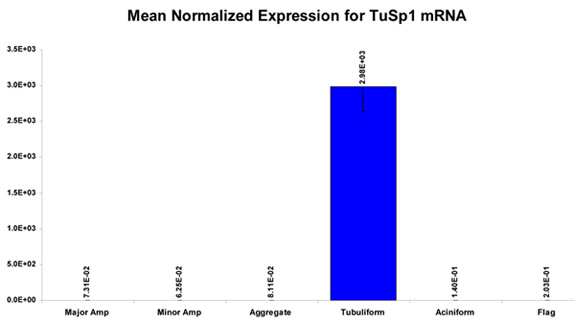 Figure 4. Representative results of the expression pattern of the silk gene, TuSp1, after surveying the TuSp1 mRNA levels in the different silk-producing glands (excluding the pyriform gland) using quantitative real-time PCR (qPCR) following isolation of total RNA from the glands. 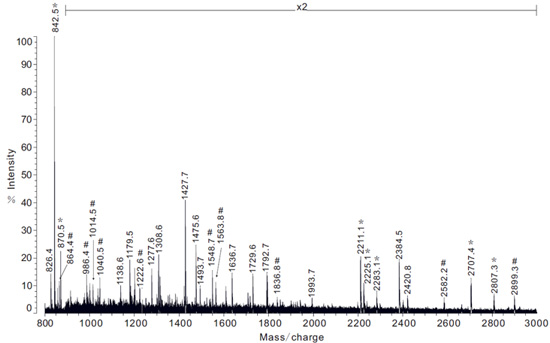 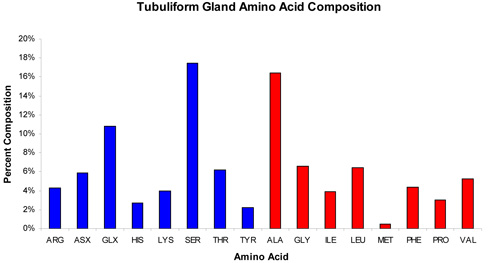 Our methodology for the microdissection of the silk-producing glands from the black widow spider offers an effective means to obtain highly purified silk-producing glands. Dissections can be completed in 1.5 to 3 hrs, yielding a complete set of the seven distinct silk-producing glands from cobweavers. Obtaining highly purified silk-gland samples allows investigators the ability to perform a broad range of biochemical studies, including identification of new silk or chaperone proteins stored within the glandular luminal contents by using mass spectrometry, analysis of mRNA levels for genes selectively expressed in different glands, and culturing of specific glands in vitro to study the mechanism of silk production. 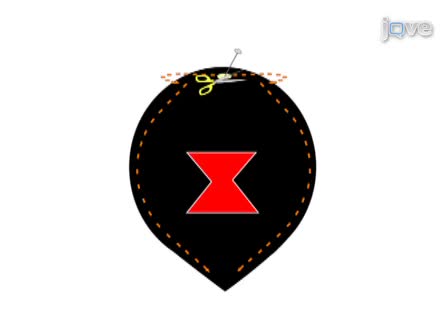