Here we describe an assay that employs the power of microinjection coupled with fluorescent in situ hybridization in order to accurately measure the nuclear export kinetics of mRNA in mammalian somatic cells.

In eukaryotes, messenger RNA (mRNA) is transcribed in the nucleus and must be exported into the cytoplasm to access the translation machinery. Although the nuclear export of mRNA has been studied extensively in Xenopus oocytes1 and genetically tractable organisms such as yeast2 and the Drosophila derived S2 cell line3, few studies had been conducted in mammalian cells. Furthermore the kinetics of mRNA export in mammalian somatic cells could only be inferred indirectly4,5. In order to measure the nuclear export kinetics of mRNA in mammalian tissue culture cells, we have developed an assay that employs the power of microinjection coupled with fluorescent in situ hybridization (FISH). These assays have been used to demonstrate that in mammalian cells, the majority of mRNAs are exported in a splicing dependent manner6,7, or in manner that requires specific RNA sequences such as the signal sequence coding region (SSCR) 6. In this assay, cells are microinjected with either in vitro synthesized mRNA or plasmid DNA containing the gene of interest. The microinjected cells are incubated for various time points then fixed and the sub-cellular localization of RNA is assessed using FISH. In contrast to transfection, where transcription occurs several hours after the addition of nucleic acids, microinjection of DNA or mRNA allows for rapid expression and allows for the generation of precise kinetic data.

There are two microinjection-based methods that can be used to measure the kinetics of mRNA export in mammalian cells; injection of in vitro synthesized mRNA, or plasmid DNA, which is transcribed in vivo into mRNA. Each technique has its advantages and drawbacks. Here we describe both techniques and discuss the differences between the two approaches.

1. Preparation of materials for injection 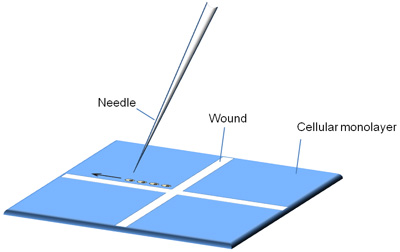 Figure 1. Microinjection coverslip. Cells are grown until they are 70-90% confluent then wounded vertically and horizontally using a 200μl plastic pipette tip. Starting from the cross-wound, cells are injected along one wound edge (arrow). 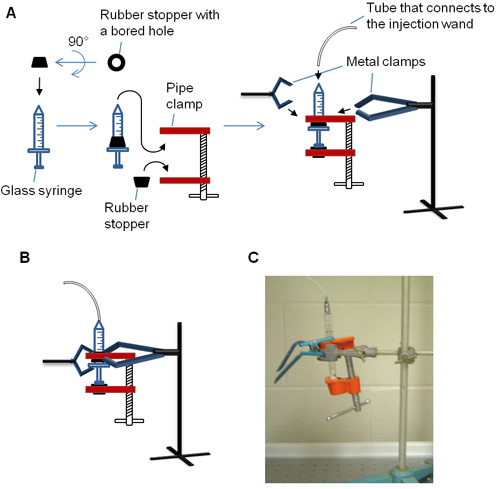 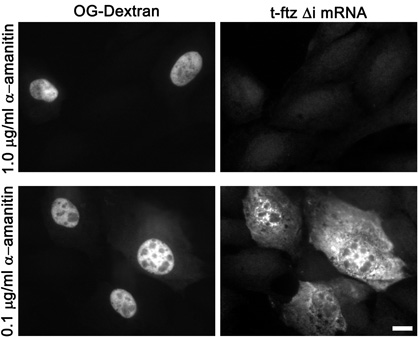 Figure 3. Effects of α-amanitin on transcription of injected plasmid DNA. NIH3T3 fibroblast cells, which were pre-treated with varying concentrations of α-amanitin, were injected with t-ftz-Δi plasmid DNA and OG-conjugated 70kD dextran. Injected cells were incubated at 37°C for 1 hour and then fixed and stained for t-ftz-Δi mRNA using a specific FISH probe6. Each row corresponds to a single field of view imaged for OG-70kDa dextran and t-ftz-Δi mRNA. Note that high, but not low, concentrations of drug totally inhibited production of t-ftz-Δi transcript. Scale bar = 15μm. 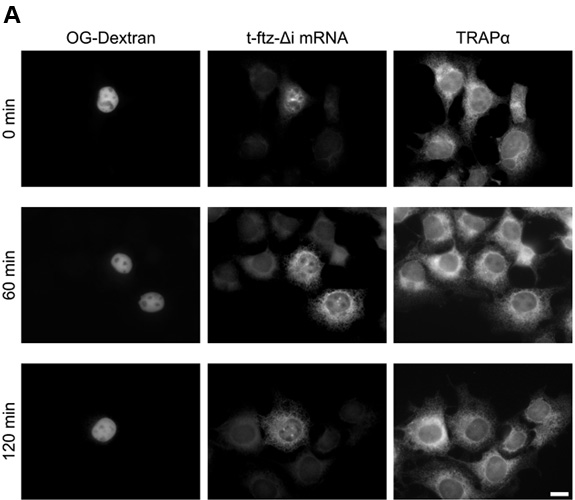 Figure 4. Time course of mRNA nuclear export. COS-7 cells were injected with t-ftz-Δi plasmid DNA and OG-conjugated 70kD dextran. 30min following injection cells were treated with α-amanitin and incubated at 37°C for the indicated time points. The cells were then fixed and stained with probe against t-ftz-Δi mRNA and with antibodies against the ER marker TRAPα. Each row corresponds to a single field of cells. A) mRNA distribution following a microinjection timecourse. B) A blow up of the 120min time point from (A) demonstrating the co-localization of t-ftz-Δi mRNA and the ER. An overlay of the t-ftz-Δi mRNA (green) and TRAPα (red) staining is shown in the right panel. Scale bars = 15μm.

Microinjection is a powerful tool that can be used to study a number of different cellular processes. Unlike conventional cell transfection, microinjection allows the researcher to effectively introduce nucleic acids into the cellular nuclei within a very narrow timeframe. As a result, one can perform kinetic analyses such as determining the rates of mRNA export, mRNA localization, and protein synthesis. Furthermore, since the timeframe of the experiment is relatively brief, one can expose cells to toxic compounds within short time spans without incurring pleiotropic effects. Moreover, inhibitory or stimulatory compounds such as dominant negative proteins, can be co-injected with the nucleic acids. Finally, microinjections avoid the requirement for transfection reagents, which are often toxic to cells and may perturb different cellular functions.

The choice of which nucleic acid to inject will depend on a number of considerations. Following plasmid DNA injection, RNA Polymerase II not only synthesizes mRNA, but also recruits protein factors to the nascent transcript12,13. Since these factors govern events such as mRNA processing, nuclear export and cytoplasmic localization, plasmid DNA injections can be used to assess how transcription is coupled to downstream processes. Although transcription may be coupled to nuclear export14, we have found that injected mRNA is exported slightly faster than in vivo transcribed mRNA6. The reasons for this are not clear at the moment, but this result may suggest that as newly synthesized mRNA emerges from RNA Polymerase II, it may be tied up in complexes that retard nuclear export.

There are some advantages with mRNA injections. First, the researcher does not have to use RNA Polymerase inhibitors, which might affect how cells regulate the overall metabolism of RNA. Secondly, the RNA can be modified in vitro prior to injection. For instance, mRNAs can be synthesized with various 5' cap analogues or poly(A) tail lengths in order to assess how these features affect nuclear export6. Thirdly, the exact amount of RNA that is injected can be roughly estimated. Following the protocol outlined above, we estimate that approximately 20,000 to 50,000 molecules are injected in each nuclei, which is relatively small when compared to the total number of transcripts in a typical mammalian cell (400,000 to 850,000 molecules)15. The major disadvantage with mRNA injections is that during microinjection, some leakage of injection fluid into the cytoplasm is unavoidable. Since mRNA injected directly into the cytoplasm is stable over long periods (A. Palazzo, unpublished observation), extra care must be taken to select which cells are quantified. Generally we analyze cells that received >90% of the injection fluid in the nucleus, as assessed by the distribution of OG-dextran.

We would like to thank E. Gomes for useful advice and A. Wilde for allowing us to use various equipment. This work was supported by a grant to A.F.P. from the Canadian Institute for Health Research (FRN 102725). 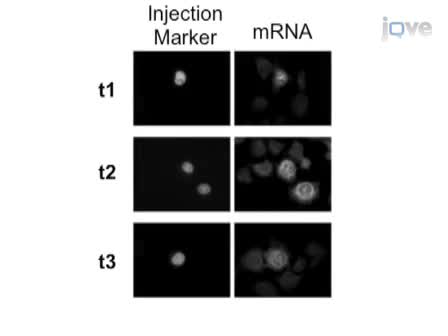