The memory of experiences and learned information is critical for organisms to make choices that aid their survival. C. elegans navigates its environment through neuron-specific detection of food and chemical odors1, 2, and can associate nutritive states with chemical odors3, temperature4, and the pathogenicity of a food source5.

Here, we describe assays of C. elegans associative learning and short- and long-term associative memory. We modified an aversive olfactory learning paradigm6 to instead produce a positive response; the assay involves starving ~400 worms, then feeding the worms in the presence of the AWC neuron-sensed volatile chemoattractant butanone at a concentration that elicits a low chemotactic index (similar to Toroyama et al.7). A standard population chemotaxis assay1 tests the worms' attraction to the odorant immediately or minutes to hours after conditioning.

Our protocol also includes image analysis methods for quick and accurate determination of chemotaxis indices. High-contrast images of animals on chemotaxis assay plates are captured and analyzed by worm counting software in MatLab. The software corrects for uneven background using a morphological tophat transformation.9 Otsu's method is then used to determine a threshold to separate worms from the background.10 Very small particles are removed automatically and larger non-worm regions (plate edges or agar punches) are removed by manual selection. The software then estimates the size of single worm by ignoring regions that are above a specified maximum size and taking the median size of the remaining regions. The number of worms is then estimated by dividing the total area identified as occupied by worms by the estimated size of a single worm.

These C. elegans associative learning and memory assays require advance preparation. For a suggested schedule of preparation, see the timeline presented in Figure 1A. Also note that worms' memories can be disturbed by physical agitation (rough pipetting, centrifugation, vortexing), and that naíve chemotaxis can be perturbed by excessive odors (perfume, etc.) in the environment.

1. Preparation of Animals for Assay

A typical naïve chemotaxis index (CI) for wild-type worms for 10% butanone is around 0.2 (Figure 4A).6 Massed (1x) or spaced (7x) training generally increases the chemotaxis index to 0.7-0.8 at time 0 (Figure 4A, C-D) to give a learning index (LI = trained CI - naíve CI) of ~0.6.6 The learning that occurs with massed or spaced training is very robust. A LI of less than 0.5 typically arises when there are problems with the naíve chemotaxis assay, and the animals have a naíve CI of 0.3 or higher. Usually, this occurs because worms are starving or too crowded on cultivation plates between bleaching and the start of the assay, or worms sit too long in M9 buffer between washes and begin to starve; environmental odors can also increase the naíve CI. Starved worms have a much higher naíve CI for 10% butanone (Figure 4B).6 We find that problems with the naíve chemotaxis are generally resolved with improved worm care and culturing.

The duration of memory in these assays is the time it takes for chemotaxis index immediately after training to return to naíve levels, when the learning index = 0. In wild-type animals, short-term associative memory typically begins to decline by 1 hour after massed training, lasts about 2 hours, and is independent of the transcription factor CREB (Figure 4C).6 Long-term associative memory typically does not begin to significantly decline until 16 hours after spaced training, lasts up to 40 hours, and is CREB-dependent (Figure 4D).6 Long-term associative memory may not reach its full potential in several instances: (1) worms do not have enough OP50 E. coli during 30-minute conditioning periods; (2) bacteria remain in the M9 buffer during starvation periods; or (3) worms are damaged during the assay (e.g. worms are pipetted against the side of the tube).

Results are generally statistically significant when 4 or more chemotaxis assay trials are run per genotype per time point. Running six replicates per genotype typically yields very significant results without becoming too much to handle; however, beginners may want to start with only three replicates. Generally, working with 2-3 genotypes or conditions at a time is comfortable for those who are experienced with these learning and memory assays.

Hand-counting worms on chemotaxis assay plates is very time consuming, can add variability between experiments or lab mates, and may also introduce biases when analyzing and interpreting data. Worm counting by image analysis (Section 6) standardizes data collection and analysis across the lab, and on average, cuts data analysis time for experienced lab members to 1/5 of that needed for hand counting. When comparing chemotaxis indices calculated using manual worm counts to those determined by the Count_worms software, we find an average error of 3.07 (± 1.19)%.

Table 1. Representative schedule for long-term associative memory assay. In this example, the assay begins on Day 1 at 9 am with a 1-hr starve. 30-min condition and starve periods are alternated until the worms have been conditioned seven times. Chemotaxis assays are run at the beginning (naíve) and end (0 hr) of training. The total run-time from start to finish is 8.5 hours. Worms on hold plates are tested for chemotaxis to butanone starting on Day 2, 16-40 hours after training. 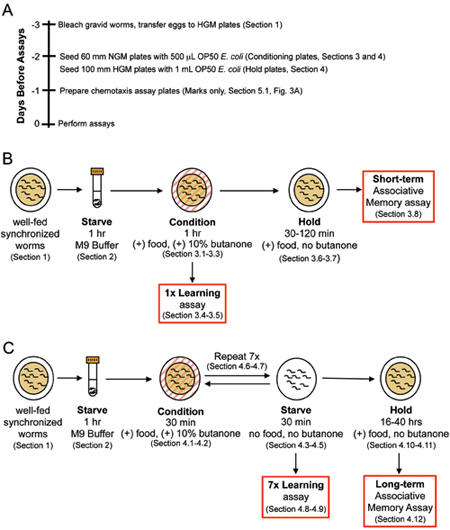 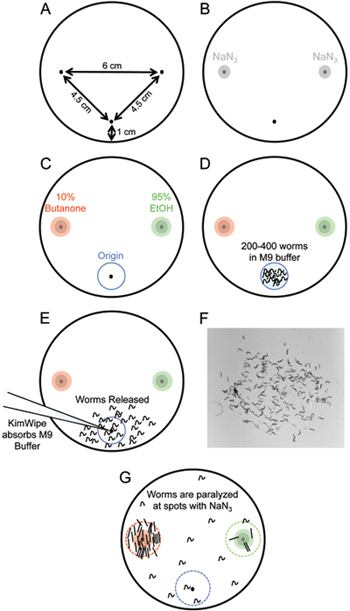 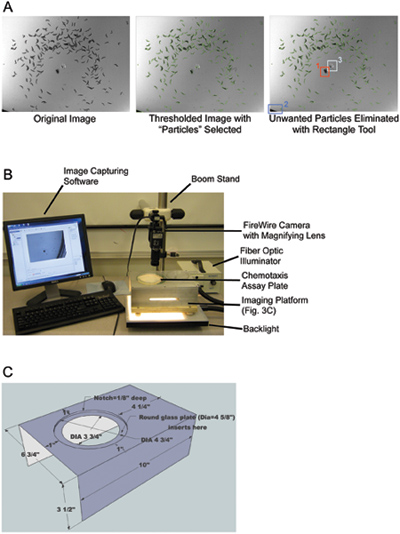 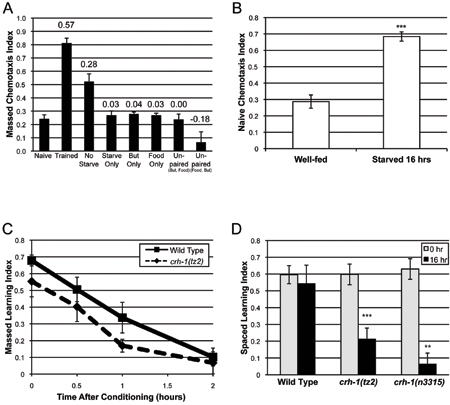 The C. elegans olfactory associative learning and memory assays presented here distinguish between the processes of massed learning, spaced learning, short-term memory, and long-term memory. These assays rely on the worms' abilities to sense food and chemical odors in their environment1,2 and to form positive associations between the two.6 Therefore, the assays are very sensitive to starvation in the starting population of animals, and great care must be taken to ensure that worms are well fed before and after training. Single massed training yields short-term associative memory. The increased number of conditioning periods and spaced training paradigm is critical for achieving long-term associative memory in C. elegans as it is in other organisms.6,8 Perhaps this assay could be modified to produce long-term memories of associations between different conditioned and unconditioned stimuli.

Our associative learning and memory assays can be used to compare the learning and memory capabilities of wild type to aging or genetic mutant animals. For example, while both associative learning and long-term associative memory abilities decline in aging wild-type worms, learning is maintained longer with age in animals with reduced insulin signaling, and learning and memory is maintained longer with age in calorically restricted animals.6 These assays are also amenable to RNAi treatment or pharmacological manipulation of C. elegans. For example, treatment of worms with daf-2 RNAi improves short- and long-term associative memory; conversely, blockage of gene transcription and protein synthesis with drugs (actinomycin D and cycloheximide, respectively) during spaced training disrupts long-term memory formation.6

Long-term memory is a process that is crucial to survival in all animals, and it appears that much of the molecular machinery involved in memory of a Pavlovian association is conserved from worms to mammals.6 The ability to distinguish and test associative learning, short-term and long-term memory using these olfactory assays makes C. elegans an excellent system for the further study of memory, and may provide insight into neurodegenerative processes that lead to loss of learning and memory in humans.

We thank W. Ryu for advice on our initial imaging set-up, Z. Gitai for the suggestion to use ImageJ13 to count worms, and J. Ashraf for help with Google SketchUp. CTM is a Pew Scholar in the Biomedical Sciences, a McKnight Scholar, and a Keck Scholar.