Numerous genetic manipulations and/or intramyocardial injections of genes, proteins, cells, and/or biomaterials are superimposed upon the dimension of time in studies of acute ischemia/ reperfusion injury and chronic remodeling in mice. This video illustrates the microsurgical procedures for ischemia/reperfusion, permanent coronary artery ligation, and intramyocardial injection studies.

Mouse models are a valuable tool for studying acute injury and chronic remodeling of the myocardium in vivo. With the advent of genetic modifications to the whole organism or the myocardium and an array of biological and/or synthetic materials, there is great potential for any combination of these to assuage the extent of acute ischemic injury and impede the onset of heart failure pursuant to myocardial remodeling.

Here we present the methods and materials used to reliably perform this microsurgery and the modifications involved for temporary (with reperfusion) or permanent coronary artery occlusion studies as well as intramyocardial injections. The effects on the heart that can be seen during the procedure and at the termination of the experiment in addition to histological evaluation will verify efficacy.

Briefly, surgical preparation involves anesthetizing the mice, removing the fur on the chest, and then disinfecting the surgical area. Intratracheal intubation is achieved by transesophageal illumination using a fiber optic light. The tubing is then connected to a ventilator. An incision made on the chest exposes the pectoral muscles which will be cut to view the ribs. For ischemia/reperfusion studies, a 1 cm piece of PE tubing placed over the heart is used to tie the ligature to so that occlusion/reperfusion can be customized. For intramyocardial injections, a Hamilton syringe with sterile 30gauge beveled needle is used. When the myocardial manipulations are complete, the rib cage, the pectoral muscles, and the skin are closed sequentially. Line block analgesia is effected by 0.25% marcaine in sterile saline which is applied to muscle layer prior to closure of the skin. The mice are given a subcutaneous injection of saline and placed in a warming chamber until they are sternally recumbent. They are then returned to the vivarium and housed under standard conditions until the time of tissue collection. At the time of sacrifice, the mice are anesthetized, the heart is arrested in diastole with KCl or BDM, rinsed with saline, and immersed in fixative. Subsequently, routine procedures for processing, embedding, sectioning, and histological staining are performed.

Nonsurgical intubation of a mouse and the microsurgical manipulations described make this a technically challenging model to learn and achieve reproducibility. These procedures, combined with the difficulty in performing consistent manipulations of the ligature for timed occlusion(s) and reperfusion or intramyocardial injections, can also affect the survival rate so optimization and consistency are critical.

When done correctly, the survival rates in mice (male: age 8-10 weeks, 22-28g; female: age 10-12 weeks, 20-26g) are: over 90% in acute ischemia/reperfusion and ischemic preconditioning experiments, over 85% in permanent artery ligation studies, and approximately 80% for intramyocardial injections. Since early injury is more readily visible by metabolic changes rather than structural, infarct size determination in ischemia/reperfusion and ischemic preconditioning experiments is performed by infusing 1% Evan's blue dye into the aorta which will perfuse the heart that is not supplied by the LAD (Figure 1A). Once the heart is removed and transversely cut in half, the tissue is incubated in 1% solution of 2,3,5-triphenyltetrazolium chloride to measure infarct size (Figure 1B). The areas are measured using Scion or NIH imaging software which can be calibrated using a micrometer imaged at the same magnification. These numbers are used to calculate area at risk/left ventricle and infarct size/area at risk 11. Strain differences can result in variations in body weight and heart size and so care should be taken to normalize these measures to heart weight, body weight, or tibia length for comparative purposes.

Permanent artery ligation results in gross structural changes such as necrosis, wall thinning, and chamber dilation. Comparison of the effects of treatment and/or time on infarct size and necrosis relative to the left ventricle, chamber area, septal wall and left ventricular free wall thickness in the permanent occlusion model (Figure 2A) can also be measured using Scion or NIH imaging software. Collagen staining with picrosirius red/fast green (Figure 2B) can be used to measure insterstitial fibrosis which correlates to functional indices of wall stiffening8-10. The image in Figure 3 represents the distribution of 6ul solution (Evan's blue) injected into the border zone of the heart following permanent artery ligation. Notice that it proceeds in the direction of the injury as well as toward the base and also transmurally. 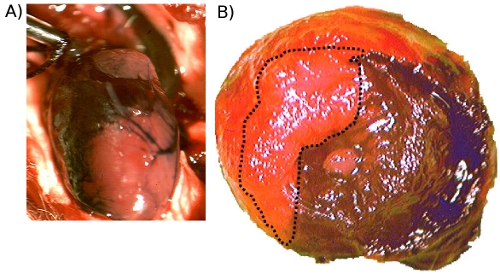 Figure 1. A. Evan's Blue injected into the aorta prior to excision. This image shows the perfused regions of the heart (stained) and the occluded area (unstained). B. Evan's Blue and TTC staining following acute ischemia/reperfusion injury. This is a representative image (20x) showing the blue dye distribution which stained the unoccluded regions as well as TTC staining of metabolically viable tissue (red). Necrotic areas do not stain and so they remain pale (outlined). 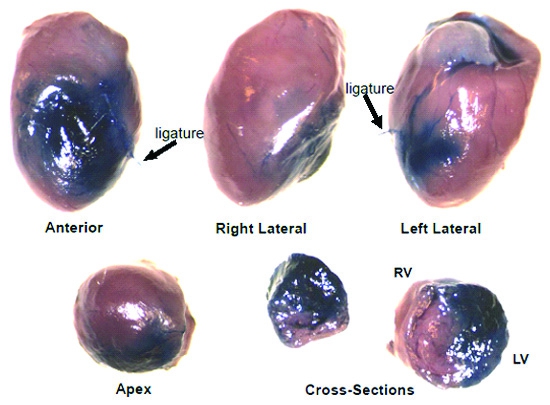 Coronary heart disease continues to be an epidemiologically and fiscally significant public health problem. Considerable basic research is still needed to understand the mechanisms by which injury and remodeling proceed and how potential therapeutics may modulate these processes if they are to be developed for clinical use. Rodents are most commonly used and the wide range of genetically modified mice available makes this species a more attractive model.

Although there are differences between mice and other species, there are many advantages to a murine model. Use of a simple dissecting scope or magnifying glass and well lit conditions enable the vasculature to readily be seen (for detailed gross anatomy of vasculature, see Salto-Tellez et al., 200413). To reduce the risk of post-operative mortality, it is very important to avoid severing large vessels since the total blood volume of a 25g mouse is less than 2ml14. In the event that excessive bleeding occurs, gentle application of pressure or pinpoint cauterization can be used to stop the bleeding.

This procedure can also be modified in a variety of ways. For example, mice can be anesthetized using isoflurane, ketamine/xylazine, or sodium pentobarbital and appropriate selection is determined by the duration of the protocol15-18. The toe-pinch reflex is the most commonly used index of the depth of anesthesia. Further, to improve the probability for long term survival, some investigators use antiarrhythmic drugs such as lidocaine to reduce the incidence of lethal arrhythmias19,20 however, it must be taken into account that this has recently been shown to have antiapoptotic properties in an acute model21. Also, to reduce post-operative pain, analgesics such as buprenorphine can be administered for the first 48 hours after surgery3,16,17,22,23. To maintain body temperature during surgery (especially for longer protocols), a rectal probe in series with a heating pad is often used in place of the isothermal pad. For ischemia/reperfusion and/or ischemic pre- or postconditioning: the duration of the occlusion(s) and reperfusion(s) can be altered; for permanent occlusion, the size of the infarct may be modified by adjusting the location of the ligature; and for intramyocardial injections (eg. cells, proteins), there can be 1-3 injection locations and the volume per injection can be up to 15 μl24. If cells are being injected, the gauge of the needle used (usually 26-30)5,25,26 should be chosen based on the size of the cells so the internal diameter of the needle is large enough to avoid sheering. To avoid confounds due to inflammatory processes triggered by the surgery, some investigators have reported using a snare that is manipulated ex vivo to occlude and reperfuse the hearts in a closed chest mouse at any point after the surgery27-29. More recently, Gao et al.30 have shown that temporary and permanent occlusion can be performed without the need for ventilation and a few laboratories have begun to use ultrasound to perform closed-chest intramyocardial injections25,31.

Since the first study demonstrating feasibility of ligating the coronary artery in mice was published by Johns and Olson in 195432, many others have adopted this model and modified it to study various aspects of myocardial injury and remodeling3,33-45. The nature of mice in terms of size, reproductive capacity, and comparatively less expense for purchase and maintenance make this species an appealing tool for a broad range of physiologic and pathophysiologic studies. As the miniaturization of technology for imaging in vivo advances46-49, as well as means to perform and analyze large scale genomics and proteomics, drug screening, efficacy of cell-based and/or protein therapies as well as biomaterials50-64, combined with the increasingly wide range of genetic manipulations afforded by ubiquitous or tissue specific transgenic or mutant/knockout mice, the murine model of myocardial infarction will undoubtedly continue to be an invaluable tool in evaluating acute cardiac injury and long term remodeling. Therefore, there is unquestionable value in being able to perform these experiments reliably and reproducibly.

This animal protocol was approved by and is in accordance with the guidelines and regulations set forth by the Institutional Animal Care and Use Committee at East Carolina University. 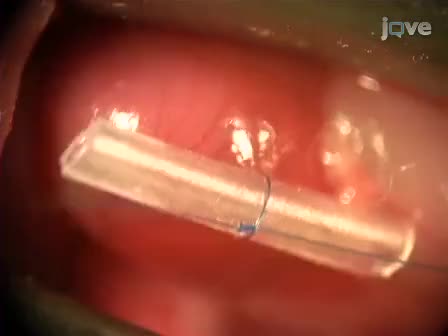