This protocol is a simple bacterial adhesion assay consisting in counting the numbers of bacterial colony forming units that are adhered onto cultured cells. The assay is robust, independent of the adhesin studied, and numerous variations are used in most laboratories working on bacterial pathogenesis.

To cause infections, bacteria must colonize their host. Bacterial pathogens express various molecules or structures able to promote attachment to host cells1. These adhesins rely on interactions with host cell surface receptors or soluble proteins acting as a bridge between bacteria and host. Adhesion is a critical first step prior to invasion and/or secretion of toxins, thus it is a key event to be studied in bacterial pathogenesis. Furthermore, adhered bacteria often induce exquisitely fine-tuned cellular responses, the studies of which have given birth to the field of 'cellular microbiology'2. Robust assays for bacterial adhesion on host cells and their invasion therefore play key roles in bacterial pathogenesis studies and have long been used in many pioneer laboratories3,4. These assays are now practiced by most laboratories working on bacterial pathogenesis.

Here, we describe a standard adherence assay illustrating the contribution of a specific adhesin. We use the Escherichia coli strain 27875, a human pathogenic strain expressing the autotransporter Adhesin Involved in Diffuse Adherence (AIDA). As a control, we use a mutant strain lacking the aidA gene, 2787ΔaidA (F. Berthiaume and M. Mourez, unpublished), and a commercial laboratory strain of E. coli, C600 (New England Biolabs). The bacteria are left to adhere to the cells from the commonly used HEp-2 human epithelial cell line. This assay has been less extensively described before6.

Manipulations of cells and bacteria are performed aseptically, under a laminar flow hood.

2. DAY 1: Preparing the inoculum and the epithelial cells

The following table shows typical results of cfu counting of adhered bacteria and inoculum from 3 experiments performed on different days: 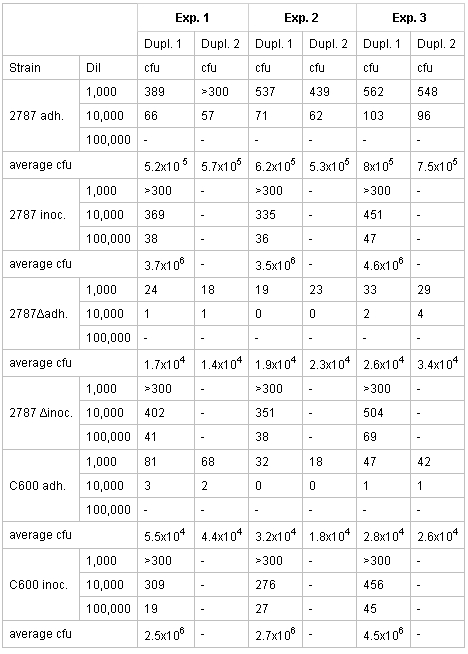 The results can be reported directly as adhered cfu, as shown in Figure 1A. Since the inoculum sizes can vary between strains because of differences in growth rates or pipetting errors, it is often advisable to report the results as percentage of adhered bacteria. The percentage of adhered bacteria can be calculated by dividing the number of cfu of adhered bacteria by the number of cfu of the inoculum, as shown in Figure 1B. By performing a repeated measure ANOVA and Bonferroni post-tests to compare all columns of Figure 1B, we can see that there are significant differences (p<0.05) between 2787 and 2787ΔaidA, as well as between 2787 and C600, but no significant difference between 2787ΔaidA and C600. 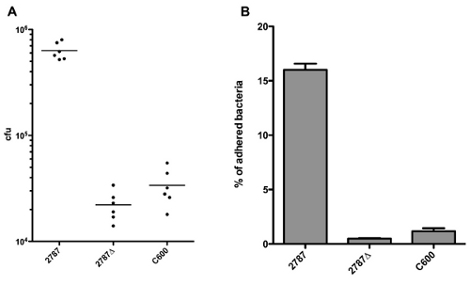 To illustrate the robustness of the assay, we can compare this protocol with the assay performed with S4074, an adhesive porcine pathogenic strain of Actinobacillus pleuropneumoniae7, incubated with cells from a recently established tracheal piglet cell line, NPTr8. Aside from differences in the media required for growth of the bacteria and the cells, the only difference is that the bacteria used for infection are from an exponentially growing culture, and not from a stationary-phase overnight culture. With A. pleuropneumoniae it is also very important to respect an MOI of 10:1 and to not exceed 3 hours of infection, otherwise the secretion of toxins will cause cell death and bias the results. In addition, this strain of A. pleuropneumoniae can readily adhere to plastic so it is important to use confluent cells and verify visually that the cells are not sloughing off.

This protocol describes a standard bacterial adherence assay that can be modified to study invasion (e.g. using gentamicin protection assay3). The counting of colony forming units allows quantification, by comparison with approaches relying on standard visualization techniques under a microscope, such as Giemsa staining. The latter only gives a qualitative view of adhesion but is often a useful complement since it can differentiate various patterns of adhesion and give mechanistical insights9. For instance a Giemsa stain performed with an inoculum of 107 cfu of 2787 is shown in Figure 2 and indicates a diffuse adhesion on the whole cell surface, characteristic of the Diffusely Adhering Escherichia coli10.

Despite the quantitative aspect of this protocol, it should be emphasized that results are usually variable. There is a fairly constant difference between positive and negative controls, with negative control typically having between 10- and 100-fold lower levels of adhesion than positive controls. But from day to day, the percentage of adhesion can vary up to 2-fold. Therefore it is often advisable to use two to three replicate per experiment, plan several experiments and perform statistical analyses using repeated measures or paired tests (either ANOVA or Student's t test).

Another key point is the washes after adhesion of bacteria. Care must be taken not to detach the epithelial cells. If the cells slough off then there will be less adhered bacteria in that well. More or less washes can be used and the number of adhered bacteria is very correlated with the number of washes (usually between 2 and 4) and depends heavily on how the experimenter performs the washes. The minimum number of washes that allows a low background should be used. No matter how many washes are chosen, it is of utmost importance to employ the same number of washes for all wells and to repeat the same gestures every time a wash is performed. 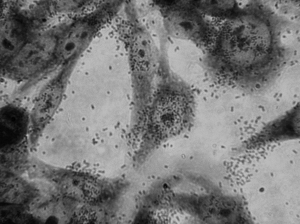 Work in the laboratories of the authors is supported by grants from the Natural Sciences and Engineering Research Council of Canada, the Canada Institutes of Health Research, and the Canada Research Chairs program. JL is supported by a fellowship from the Groupe d'Étude des Protéines Membranaires (GEPROM) through funding from the Fonds de Recherche en Santè du Quèbec. 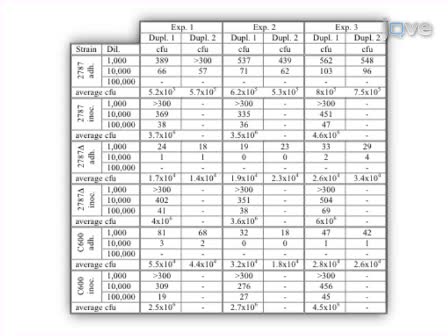