Mutations in the kisspeptin receptor (KISS1R) are associated with reproductive disorders in patients. Here we describe how to introduce mutations of interest in the GC-rich sequence of KISS1R as well as the use of KISS1R constructs to characterize the degradation pathway of the receptor by immunoprecipitation and western blot.

The kisspeptin receptor (KISS1R) is a G protein-coupled receptor recognized as the trigger of puberty and a regulator of reproductive competence in adulthood 1,2,3. Inactivating mutations in KISS1R identified in patients have been associated with iodiopathic hypogonadotropic hypogonadism (IHH) 1,2 and precocious puberty 4. Functional studies of these mutants are crucial for our understanding of the mechanisms underlying the regulation of reproduction by this receptor as well as those shaping the disease outcomes, which result from abnormal KISS1R signaling and function. However, the highly GC-rich sequence of the KISS1R gene makes it rather difficult to introduce mutations or amplify the gene encoding this receptor by PCR.

Here we describe a method to introduce mutations of interest into this highly GC-rich sequence that has been used successfully to generate over a dozen KISS1R mutants in our laboratory. We have optimized the PCR conditions to facilitate the amplification of a range of KISS1R mutants that include substitutions, deletions or insertions in the KISS1R sequence. The addition of a PCR enhancer solution, as well as of a small percentage of DMSO were especially helpful to improve amplification. This optimized procedure may be useful for other GC-rich templates as well.

The expression vector encoding the KISS1R is been used to characterize signaling and function of this receptor in order to understand how mutations may change KISS1R function and lead to the associated reproductive phenotypes. Accordingly, potential applications of KISS1R mutants generated by site-directed mutagenesis can be illustrated by many studies 1,4,5,6,7,8. As an example, the gain-of-function mutation in the KISS1R (Arg386Pro), which is associated with precocious puberty, has been shown to prolong responsiveness of the receptor to ligand stimulation 4 as well as to alter the rate of degradation of KISS1R 9. Interestingly, our studies indicate that KISS1R is degraded by the proteasome, as opposed to the classic lysosomal degradation described for most G protein-coupled receptors 9. In the example presented here, degradation of the KISS1R is investigated in Human Embryonic Kidney Cells (HEK-293) transiently expressing Myc-tagged KISS1R (MycKISS1R) and treated with proteasome or lysosome inhibitors. Cell lysates are immunoprecipitated using an agarose-conjugated anti-myc antibody followed by western blot analysis. Detection and quantification of MycKISS1R on blots is performed using the LI-COR Odyssey Infrared System. This approach may be useful in the study of the degradation of other proteins of interest as well.

Table 1. Combination of reagents successfully used to mutate and amplify the GC-rich KISS1R 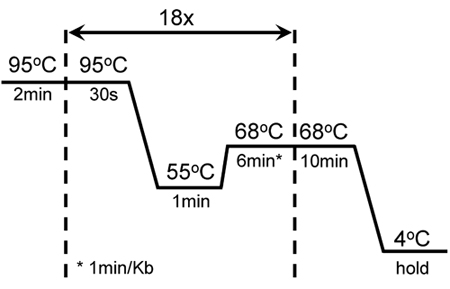 Figure 1. Cycling conditions of successful mutagenesis and amplification of GC-rich KISS1R: A 2min hot start was followed by 18 cycles of 30 sec melting at 95°C; 1 min annealing at 55°C and 6 min extension at 68°C. An additional 10 min extension at 68°C was added at the end of the last cycle. These settings were adjusted from the original mutagenesis protocol of the QuikChange II XL-Site-Directed Mutagenesis kit (Stratagene). 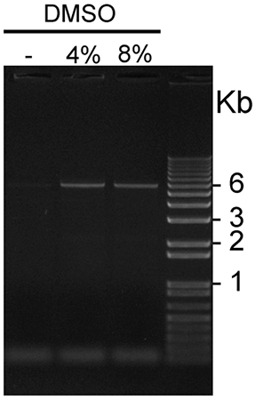 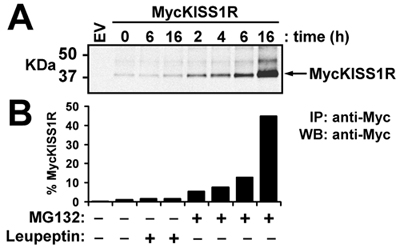 Figure 3. Effect of leupeptin or MG132 on levels of MycKISS1R protein in HEK-293 cells: HEK-293 cells expressing MycKISS1R were treated with 100μg/ml leupeptin or 10μM MG132 at 37°C for the designated times. MycKISS1R on 400μg of cell lysate was immunoprecipitated with 2.5μg of agarose-conjugated anti-myc antibody and analyzed by western blot. (A) LI-COR Odyssey detection of MycKISS1R after incubation of immunoblots with rabbit anti-Myc-tag antibody followed by incubation with IRDye 800CW-labeled anti-rabbit; (B) Quantification of MycKISS1R bands shown in (A) using the LI-COR Odyssey quantification software. Results are represented as fold-increase over untreated cells (time 0).

Site-directed mutagenesis has been used to study protein function by introducing nucleotide changes in the coding sequence of targeted genes for over three decades. The original technique was described in 1978 by the British-Canadian Chemist and Nobel Prize winner Michael Smith 10. Michael Smith shared the 1993 Nobel Prize in Chemistry with Kary Mullis, the American Biochemist who invented the Polymerase Chain Reaction (PCR) 11. The original method described by Michael Smith has been improved over the years. The ability to introduce mutations, insertions or deletions into the desired gene sequence in a single PCR reaction has contributed to the high accuracy and success rates of this procedure, as well as to the production of mutants in a relatively short period of time.

Despite all technical improvements, mutations and amplification of highly GC-rich gene sequences such as KISS1R are particularly troublesome. The size of primers designed for mutagenesis of high GC content sequences must be adjusted to accommodate the GC content so that the melting temperature is within the recommended range. Accordingly, primers to introduce mutations in KISS1R are sized to have a melting point between 78°-86°C. Some of the KISS1R gene regions have a GC content of over 85%. The size of primers designed to introduce mutations in these regions must be adjusted to meet the melting point range mentioned above. Primers with melting points above that limit may not separate at 95°C, impairing amplification. On the other hand, primers with a Tm lower than 78°C are more likely to bind to and amplify non-specific sequences.

Using the optimized settings described here, we have successfully introduced several mutations in distinct regions of the KISS1R cDNA, which included up to 6 nucleotide changes at once (carried by same primers) and the deletion of up to 27 nucleotides. Transformation of these mutants generated hundreds to thousands of colonies with a high (80-90%) rate of colonies containing the correct mutant sequence confirmed by DNA sequencing.

Site-directed mutagenesis can also be used to add antigenic tags such as Myc or Flag to the amino or carboxyl terminus of proteins. These tags allow for selective immunoprecipitation and/or detection of proteins, and are especially helpful when reliable antibodies against the protein of interest are not available, as for KISS1R. In the example presented here, the expression vector encoding for the KISS1R, which is fused to an eleven amino acid Myc-tag at its amino-terminus (MycKISS1R), is used to study the degradation pathway of KISS1R in HEK-293 cells. The efficiency of transfection of HEK-293 cells with MycKISS1R using the method described here is 25-30%. Thus, immunoprecipitation is used to concentrate MycKISS1R from cell lysates thus improving detection and visualization of the receptor. This approach is often used to facilitate visualization of proteins expressed endogenously at low levels as well 14.

Importantly, G protein-coupled receptors such as KISS1R, as well as other membrane proteins, should not be homogenized by sonication or boiled before gel loading. While these procedures are typically used to process samples for immunoprecipitation or western blot, sonication and boiling lead to the aggregation of membrane proteins, impairing their proper migration during electrophoresis 15. In fact, replacement of these procedures with milder homogenization, such as needle-passage, and lower sample heating, such as 37°C for 30 min (rather than boiling) is required for detection of KISS1R monomers.

Immunoprecipitated MycKISS1R is detected using Odyssey Imager (LI-COR Biosystems) after incubation of blots with infrared dye-conjugated secondary antibody. The advantages of this system include a sustaining strong signal that can be detected with high accuracy for months, as opposed to the short-lived signal emitted by chemiluminescence. Moreover, the quantification software of Odyssey Imager offers greater sensitivity and linearity of detection when compared to traditional quantification of scanned x-ray films following chemiluminescence. However, detection of horseradish peroxidase (HRP)-conjugated antibodies by chemiluminescence may be used as well.

In summary, this manuscript demonstrates how to investigate the effect of genetic mutations in the KISS1R gene, which is a highly GC-rich sequence, in order to understand how mutations in this receptor can lead to reproductive disorder phenotypes such as hypogonadotropic hypogonadism or precocious puberty. 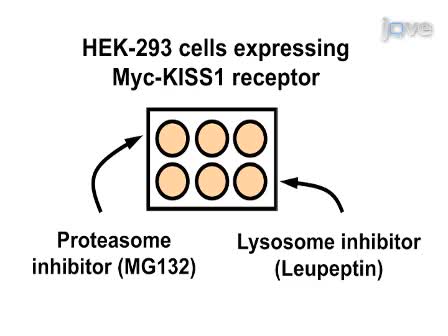