An in vitro method for preparing functional glucocorticoid receptor (GR)•hsp90 protein complexes from purified proteins and cellular lysates is described. The method utilizes immunoadsorption of recombinant GR followed by salt-stripping and protein complex reconstitution. The importance of cofactors and buffer conditions are discussed, as are potential method applications.

Hsp90 is an essential and highly abundant molecular chaperone protein that has been found to regulate more than 150 eukaryotic signaling proteins, including transcription factors (e.g. nuclear receptors, p53) and protein kinases (e.g. Src, Raf, Akt kinase) involved in cell cycling, tumorigenesis, apoptosis, and multiple eukaryotic signaling pathways 1,2. Of these many 'client' proteins for hsp90, the assembly of steroid receptor•hsp90 complexes is the best defined (Figure 1). We present here an adaptable glucocorticoid receptor (GR) immunoprecipitation assay and in vitro GR•hsp90 reconstitution method that may be readily used to probe eukaryotic hsp90 functional activity, hsp90-mediated steroid receptor ligand binding, and molecular chaperone cofactor requirements. For example, this assay can be used to test hsp90 cofactor requirements and the effects of adding exogenous compounds to the reconstitution process.

The GR has been a particularly useful system for studying hsp90 because the receptor must be bound to hsp90 to have an open ligand binding cleft that is accessible to steroid 3. Endogenous, unliganded GR is present in the cytoplasm of mammalian cells noncovalently bound to hsp90. As found in the endogenous GR•hsp90 heterocomplex, the GR ligand binding cleft is open and capable of binding steroid. If hsp90 dissociates from the GR or if its function is inhibited, the receptor is unable to bind steroid and requires reconstitution of the GR•hsp90 heterocomplex before steroid binding activity is restored 4 . GR can be immunoprecipitated from cell cytosol using a monoclonal antibody, and proteins such as hsp90 complexed to the GR can be assayed by western blot. Steroid binding activity of the immunoprecipitated GR can be determined by incubating the immunopellet with [3H]steroid.

In the method presented, GR is immunoadsorbed from cell cytosol and stripped of the endogenous hsp90/hsp70 chaperone machinery using mild salt conditions. The salt-stripped GR is then incubated with reticulocyte lysate, ATP, and K+, which results in the reconstitution of the GR•hsp90 heterocomplex and reactivation of steroid binding activity 7. This method can be utilized to test the effects of various chaperone cofactors, novel proteins, and experimental hsp90 or GR inhibitors in order to determine their functional significance on hsp90-mediated steroid binding 8-11.

2. Immunoadsorption of GR from cell cytosol

Representative SDS-PAGE and western blot data are presented in Figure 3. The endogenous GR•hsp90 heterocomplex is immunoadsorbed from cell cytosol using anti-GR antibody and individual proteins that co-immunoadsorb with the GR are visualized by Coomassie staining (Fig. 3A). Confirmation of protein identity of any component of the immunopellet at any step in the reconstitution assay can be made by SDS-PAGE calculation of molecular weight and western blotting using monoclonal antibodies raised against the protein of interest.

Reconstituted GR•hsp90 heterocomplexes are presented using Experion microfluidic electrophoresis data (Fig. 3C and 3D) and western blot analysis (Fig. 3B). The specificity of the GR immunoadsorption is confirmed by replacing the immunoadsorbing anti-GR antibody with a nonimmune antibody (Fig. 3C, NI IgG lanes). Even when excessive amounts of nonimmune antibody are used, no GR or molecular chaperones are immunoprecipitated (cf. in Fig. 3C, the GR, hsp90, and hsp70 protein bands present in the anti-GR immunoadsorption lanes with the lack of band observed in the NI IgG lanes). Likewise, it is possible to confirm the dissociation of hsp90 and other chaperone proteins from the salt-stripped GR by western blot analysis (Fig. 3B) of the stripped and reconstituted immunopellets. The heavy chain of the immunoadsorbing antibody (HC) is detectable by both Coomassie stain and western blotting, and it serves to confirm equal sized immunopellets are being visualized in each lane. 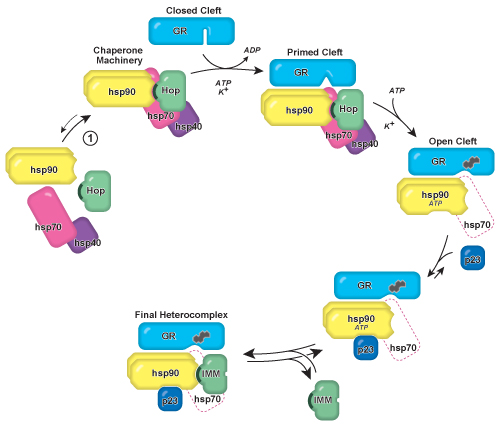 Figure 1. Model of GR•hsp90 heterocomplex assembly and GR steroid binding cleft opening. The hsp90/hsp70-based chaperone machinery converts the GR ligand binding domain from a folded conformation in which the steroid binding cleft is closed and not accessible to hormone to an open cleft conformation that can be accessed (illustrated by the heterocyclic steroid icon). The chaperone machinery is preassembled in the cell and will spontaneously form when purified hsp90, hsp70, and Hop are mixed in solution (Reaction 1). Hop contains a 34 amino acid tetratricopeptide repeat (TPR) domain (illustrated as a dark crescent), and is later replaced during the heterocomplex maturation process by a TPR domain-containing immunophilin protein. The machinery opens the steroid binding cleft in an ATP- and K+-dependent manner, after which Hop and most of the hsp70 and hsp40 ultimately leave the complex (illustrated as a dashed icon). Mechanistically, hsp70 interacts with the GR prior to hsp90 and primes the receptor for hsp90 and subsequent cleft opening. Experimentally, steroid binding and GR cleft opening are increased if hsp90 and hsp70 are simultaneously present. The heterocomplex is stabilized by entry of the hsp90 co-chaperone p23, which maintains hsp90 in an ATP-bound conformation. After the exit of Hop, a high molecular weight immunophilin (IMM) can bind hsp90, forming the final heterocomplex as it is recovered from cells. Adapted from Pratt and Toft 1. 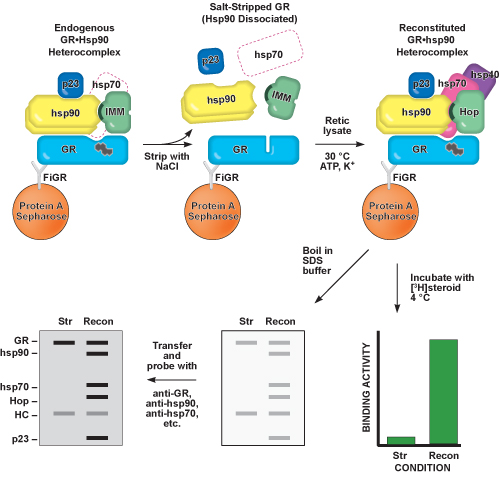 Figure 2. Schematic representation of Steps 2-5 of this protocol. The GR is immunoadsorbed from cell cytosol using a monoclonal antibody raised against the GR (FiGR) bound to a pellet of protein A-Sepharose. Hsp90 and other chaperone proteins present in the endogenous GR•hsp90 heterocomplex are co-immunoadsorbed with the GR, and the GR is able to bind to steroid. Hsp90 is dissociated from GR using a mild salt treatment, referred to as salt-stripping (Str). The steroid binding cleft of the salt-stripped GR closes, making it unable to bind to steroid. Intermediate GR•hsp90 heterocomplexes containing hsp70, hsp40, and Hop, which are capable of binding steroid, can be reconstituted (Recon) by incubating the salt-stripped GR with purified proteins or reticulocyte lysate (Retic lysate) and cofactors. The steroid binding activity and immunopellet protein content of each step can be identified by overnight [3H]steroid incubation and western blotting, respectively. 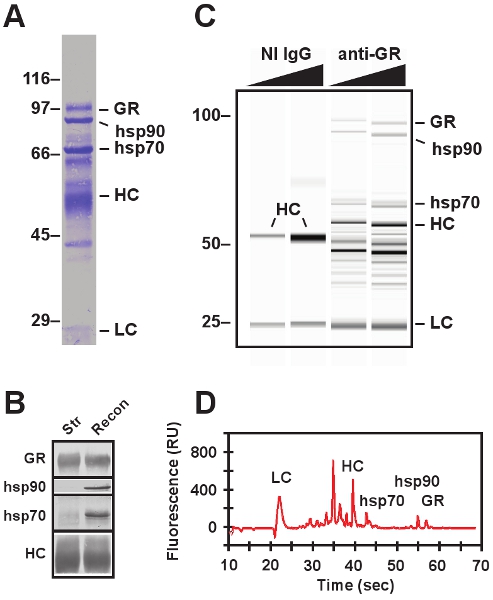 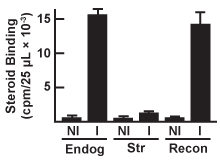 The assay described above can be adapted to test a myriad of conditions affecting the chaperone actions of the hsp90/hsp70-based chaperone machinery as well as GR steroid binding. It is a modification of previously reported methods 4,8,9,17 and is designed to take advantage of recent advances in electrophoresis technology and be accessible to a broader research community. Additional cofactors or proteins of interest may be added to the GR•hsp90 heterocomplex reconstitution mixture, described in Step 4 of the protocol, in order to observe effects on steroid binding, heterocomplex protein-protein interactions, and co-factor requirements. For example, the effects of ischemia-reperfusion on hsp90 function can be modeled with the addition of increasing concentrations of a reactive oxygen species. Purified proteins with a specific feature (e.g. acetylated hsp90) or potential hsp90 inhibitors (e.g. novel geldanamycin analogs) can be added in order for their effects on steroid binding and heterocomplex formation to be determined.

Down-stream assays different than electrophoresis, western blotting, and steroid binding assays may also be employed. For example, immunoprecipitated multiprotein complexes have been analyzed by flow cytometry with substantial success 18,19. The immunoadsorbed GR•hsp90 complexes may also be assayed for hsp90/hsp70 nucleotide state or visualized using atomic force microscopy 17. Hsp90 client proteins other than the GR may be used (e.g. chaperoning checkpoint kinase I (Chk1) 20), and seminal research has been conducted using variations of this protocol with the estrogen receptor, progesterone receptor, and Src 1,13,21. 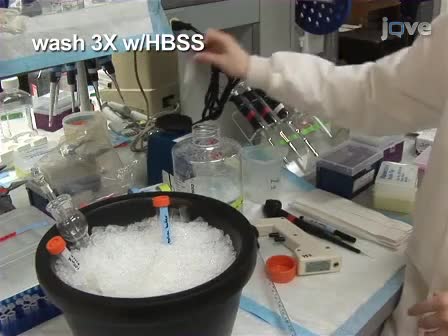