Most human malaria deaths are caused by blood-stage Plasmodium falciparum parasites. Cerebral malaria, the most life-threatening complication of the disease, is characterised by an accumulation of Plasmodium falciparum infected red blood cells (iRBC) at pigmented trophozoite stage in the microvasculature of the brain2-4. This microvessel obstruction (sequestration) leads to acidosis, hypoxia and harmful inflammatory cytokines (reviewed in 5). Sequestration is also found in most microvascular tissues of the human body2, 3. The mechanism by which iRBC attach to the blood vessel walls is still poorly understood.

The immortalized Human Brain microvascular Endothelial Cell line (HBEC-5i) has been used as an in vitro model of the blood-brain barrier6. However, Plasmodium falciparum iRBC attach only poorly to HBEC-5i in vitro, unlike the dense sequestration that occurs in cerebral malaria cases. We therefore developed a panning assay to select (enrich) various P. falciparum strains for adhesion to HBEC-5i in order to obtain populations of high-binding parasites, more representative of what occurs in vivo.

A sample of a parasite culture (mixture of iRBC and uninfected RBC) at the pigmented trophozoite stage is washed and incubated on a layer of HBEC-5i grown on a Petri dish. After incubation, the dish is gently washed free from uRBC and unbound iRBC. Fresh uRBC are added to the few iRBC attached to HBEC-5i and incubated overnight. As schizont stage parasites burst, merozoites reinvade RBC and these ring stage parasites are harvested the following day. Parasites are cultured until enough material is obtained (typically 2 to 4 weeks) and a new round of selection can be performed. Depending on the P. falciparum strain, 4 to 7 rounds of selection are needed in order to get a population where most parasites bind to HBEC-5i. The binding phenotype is progressively lost after a few weeks, indicating a switch in variant surface antigen gene expression, thus regular selection on HBEC-5i is required to maintain the phenotype.

In summary, we developed a selection assay rendering P. falciparum parasites a more "cerebral malaria adhesive" phenotype. We were able to select 3 out of 4 P. falciparum strains on HBEC-5i. This assay has also successfully been used to select parasites for binding to human dermal and pulmonary endothelial cells. Importantly, this method can be used to select tissue-specific parasite populations in order to identify candidate parasite ligands for binding to brain endothelium. Moreover, this assay can be used to screen for putative anti-sequestration drugs7.

Human brain microvascular endothelial cell (HBEC-5i) culture has been previously described in 6, 8. P. falciparum parasites were cultured as in 9. Both HBEC-5i and P. falciparum parasite cultures should be kept in sterile conditions at all times. All reagents should be pre-warmed at 37°C. We recommend to regularly check for mycoplasma contamination10 by PCR (Minevera Biolabs, following manufacturer's instructions). The protocol is summarized in Figure 1.


2. Preparing endothelial cells for a selection


4. Selection of P. falciparum for cytoadhesion to endothelial cells

Unselected parasites show a low level of binding to HBEC-5i (Figure 3A). Thus, after the first round of selection, very few parasites will be harvested and it may take up to a month of culturing to reach a parasitaemia sufficient for the second round of selection. After each round of selection, more and more parasites bind to the endothelial cells and the selections can be repeated at shorter time intervals. After 4-5 rounds of selection, high-binding parasite populations are obtained (Figure 3).

In our hands, the binding of HB3-HBEC to HBEC-5i or TNF activated HBEC-5i was of similar level (data not shown).

The protocol described here was tested with 4 P. falciparum strains: HB3, IT/FCR3, 3D7 and Dd2 (Table 1). Only the latter proved not able to bind to HBEC-5i, even after 5 rounds of selection.

HB3 parasites were also selected for cytoadherence to Human Dermal and Pulmonary Microvascular Endothelial Cells (HDMEC and HPMEC). After 4 rounds of selection, using the method described here, a high-binding population was obtained on both HDMEC and HPMEC (Figure 4). 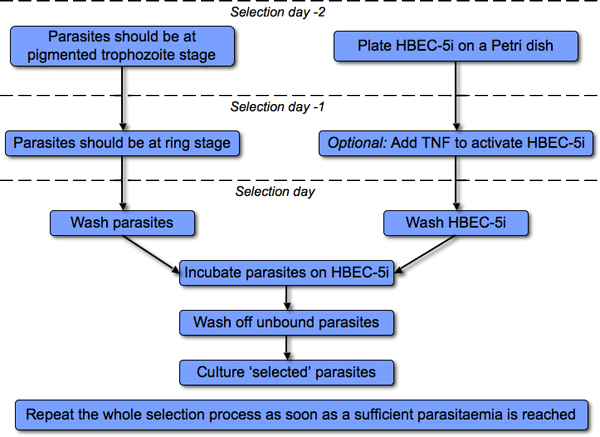 Figure 1. Overview of the selection process. 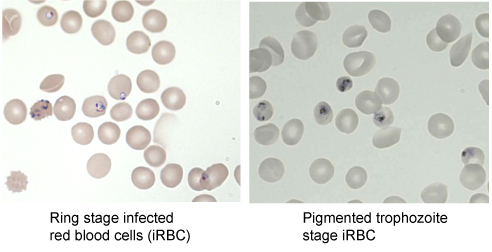 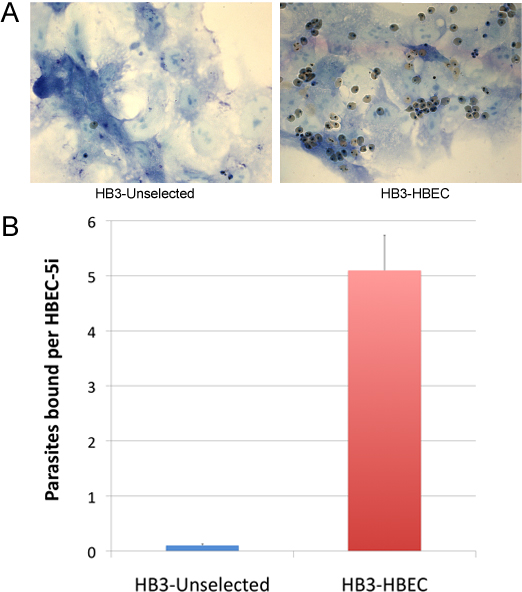 Figure 3. Typical example of parasites binding to HBEC-5i. (A) The blue layer is HBEC-5i fixed with glutaraldehyde and stained with Giemsa, visualized under microscope at 1000X magnification. Pictures were taken after uRBC and unbound iRBC were washed away. The left panel shows a single P. falciparum HB3 (unselected) parasite bound to HBEC-5i. In the right panel the HB3-HBEC parasites had been selected for 5 rounds. (B) Data represents the average of two independent experiments, each performed in duplicate. The number of parasites bound per endothelial cell was counted.

Table 1. Summary of Plasmodium falciparum strains that were successfully selected for binding to HBEC-5i. Note that HB3 was also selected on TNF-activated HBEC-5i. After 5 rounds of selection, the Dd2 strain showed no increase in binding to HBEC-5i compared to unselected-Dd2. 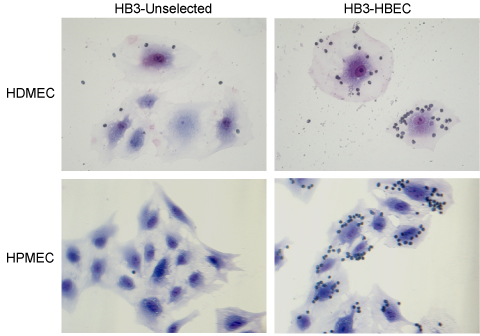 Figure 4. Binding of P. falciparum HB3 parasites to dermal (HDMEC) and pulmonary (HPMEC) endothelial cells, before and after 4 rounds of selection. Although the culture medium for HDMEC and HPMEC slightly differs (see supplier's instructions), the protocol used for the selection was identical as with HBEC-5i. Pictures taken at 400X magnification.

The hallmark of cerebral malaria is sequestration of P. falciparum iRBC within the brain microvasculature2, 3. However, in vitro cultures of P. falciparum only poorly cytoadhere to HBEC-5i, a model for human brain microvascular endothelium. Here we developed a straightforward assay to enrich a population for binding to HBEC-5i, a more "in-vivo like" phenotype. Three out of 4 P. falciparum strains were successfully selected using this method. Furthermore, HB3 was also selected on HDMEC and HPMEC, indicating that this protocol can be used for various parasite and endothelial cell types.

Different hypotheses may explain the lack of binding with the Dd2 strain. The most likely being the fact that this parasite line is knobless, which deeply impedes the cytoadherence13, 14.

We recommend culturing unselected parasites alongside the selection process to provide a control for comparison. This will allow, for example, comparing the transcriptome of binding and non-binding parasites, with the hope of discovering parasite ligand candidates.

TNF is a cytokine found at high level in cerebral malaria patients and has been show to induce the expression of many surface proteins of HBEC-5i (Claessens et al, in preparation and 8, 15, 16). In this case, the amount of bound iRBC was similar in normal HBEC-5i compared to activated HBEC-5i.

This "sequestration model" can also be used to study the molecular interaction between the iRBC and the endothelial cell, as well as the effect of putative anti-cytoadherence drugs. In this case, we recommend plating HBEC-5i in smaller wells, such as "8-well chamber slides" (BD 354628) or "CultureWell" (Sigma C7735-20EA). 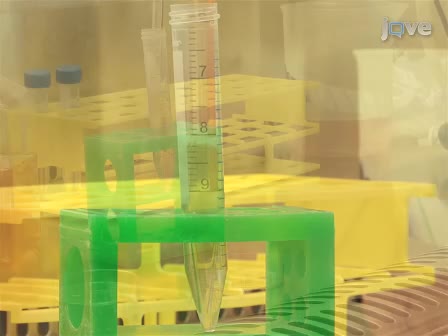