Adult-born neurons expressing ChR2 can be manipulated in slice electrophysiological preparations in order to examine their contribution towards the function of olfactory neural circuits.

Standard slice electrophysiology has allowed researchers to probe individual components of neural circuitry by recording electrical responses of single cells in response to electrical or pharmacological manipulations1,2. With the invention of methods to optically control genetically targeted neurons (optogenetics), researchers now have an unprecedented level of control over specific groups of neurons in the standard slice preparation. In particular, photosensitive channelrhodopsin-2 (ChR2) allows researchers to activate neurons with light3,4. By combining careful calibration of LED-based photostimulation of ChR2 with standard slice electrophysiology, we are able to probe with greater detail the role of adult-born interneurons in the olfactory bulb, the first central relay of the olfactory system. Using viral expression of ChR2-YFP specifically in adult-born neurons, we can selectively control young adult-born neurons in a milieu of older and mature neurons. Our optical control uses a simple and inexpensive LED system, and we show how this system can be calibrated to understand how much light is needed to evoke spiking activity in single neurons. Hence, brief flashes of blue light can remotely control the firing pattern of ChR2-transduced newborn cells.

Part B: Loose Patch Measurement of the Threshold to Spike

On our microscope (Olympus BX51WI), our LED is in line with 2 apertures and a condenser lens, thus maintaining the original lightpath of the factory-installed arc lamp. By closing both the field diaphragm and the aperature diaphragm, we can achieve brightfield contrast sufficient for patch clamp recordings (fig. 1b). With all diaphragms fully open we expose the slice to maximum light power for channelrhodopsin activation (fig. 1a). On our microscope, this patching configuration produces light-density that is approximately three orders of magnitude lower than the maximum full field density (4.1 μW/mm2 versus 6.88 mW/mm2).

We see robust labeling of adult-born olfactory bulb granule and periglomerular neurons weeks after lentiviral infection of migrating neuroblasts in the rostral migratory stream (fig. 2a) A loose-patch recording from a single adult-born ChR2-EYFP expressing granule cell indicates that a 5 ms stimulation at maximum power (6.88 mW/mm2) is sufficient to evoke spiking (fig. 2b). Since expression level varies between cells, the amount of light that passes the threshold to spike will vary and should be described statistically for each cell type of interest. 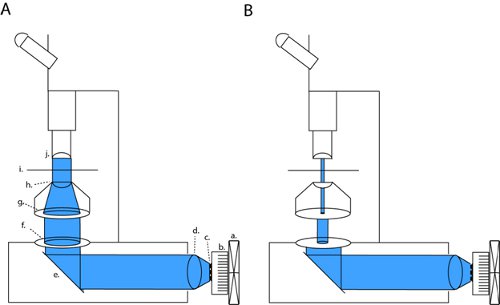 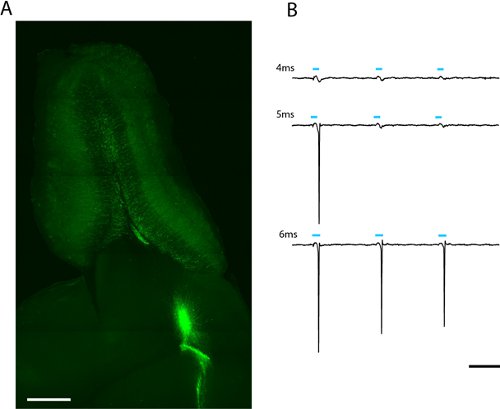 Figure 2. Image of a 300μm horizontal slice of olfactory bulb for patch clamp and whole-field photostimulation (a). Lentivirally infected adult-born granule cells expressing ChR2-EYFP can be seen radiating from the core of the olfactory bulb. The light-dose required to evoke spiking can be found by increasing the duration of the LED flash (b). The threshold for this granule cell was 5ms at full LED intensity (2.43mW/mm2). Scale in (a) = 500μm, scale in (b) = 50ms.

Recent years have seen an explosion in the popularity of optogenetic tools for neuroscience research6. As a result, it is increasingly important to lower the barrier of entry for labs wishing to begin using these new tools. Here we describe how to conduct a simple and low cost retrofitting and calibration of a conventional patch-clamp rig so that it can do full-field optical stimulation of channelrhodopsin-expressing neurons. In particular, we apply this technique to the study of olfactory bulb adult neurogenesis to specifically control newly born neurons with light.

We demonstrate how to determine if a LED light source produces sufficient power for ChR2 activation, and demonstrate how the intrinsically rapid on/off speed of LEDs can easily regulate the dosage of light given to neurons. While our lab has successfully used this technique, there are alternative ways of exposing neurons to controlled doses of light each with its own benefits and drawbacks.

If more optical power is needed, many mercury lamps will produce considerably more light than an LED array, and a microscope's objective and filter sets are already present to focus the desired wavelengths onto the sample. However, with this solution neither the power nor the duration of exposure can be easily controlled. Length of exposure would need to be controlled by an external shutter, and these are often more expensive than a LED array, and the power would need to be attenuated by adding neutral density filters to the light path – at risk of causing vibrations that would reduce the success rate of patch-clamp experiments.

Our implementation also makes it difficult to control the spatial extent of illumination. If spot illumination is desired to target specific groups of ChR2 expressing neurons, one solution is to scan a laser spot with a galvometer scanning mirror to different locations on the slice. At this point, however, the microscope begins to resemble a conventional confocal microscope in both complexity and cost. A recently developed alternative is to focus the image of a micro-led array onto the sample7, or to shape a uniform field of excitation with a digital micromirror device8.

LED arrays have distinct advantages that make them uniquely suited to channelrhodopsin stimulation. Their on/off speed occurs on nanosecond timescales and so this speed can be used to finely tune the duration of light exposure to biological tissue. In addition, the color of LEDs can be chosen to fit specific excitation bands without the need for filtering. With the advent of red-shifted channelrhodopsin mutants, it would be simple to use two LEDs of different colors to individually excite two different populations of neurons. Alternatively, white LED arrays - like the one used in this report that combines blue (450nm peak) and green (550nm peak) gallium nitride diodes - are broad-spectrum which gives the investigator the freedom to target a wide range of excitation bands.

After optical calibration, each cell type that expresses channelrhodopsin must be characterized to determine how much light is required to evoke an action potential. We describe a simple electrophysiological characterization using the loose-patch method, which has the advantage of avoiding changing the cell’s internal dynamics with the pipette solution. However, in a full study whole-cell recordings are necessary to determine how much light produces a given amount of depolarization, and the stability of these evoked potentials over time. Unfortunately the sensitivity of spiking activity to light dose is depends on a number of parameters outside of experimental control. These include the level of ChR2 expression (a function of construct copy number and developmental regulation of the viral promoter), and the intrinsic biophysical properties of the neuron9.

The fluorescent intensity of the ChR2-EYFP fusion may be an indicator of how much light is needed to bring the neuron to threshold. However, there are nonlinearities in this sort of estimate caused by internalized aggregates of channel, and by shunting conductances caused by activating channels distal to the spike initiation zone. Ultimately, for every type of neuron a statistical characterization of the population will have to be made. This suffers for the caveat that dimly fluorescent cells are difficult to patch, and so viral constructs may benefit from an additional fluorescent label that is somatically restricted10.

It is clearly redundant to patch a ChR2 infected neuron if light can be used to control its spiking activity. A better use of optogenetics in-vitro is to investigate the synaptic connectivity of an optogenetically targeted population with other members of the circuit. In our hands, we have coupled full field stimulation of ChR2 adult-born granule cells with patch clamp recordings from mitral cells to measure the properties of the newly formed synapse between these two cell types 4. Because the probability of connectivity between a single granule and mitral cell is very low, our experiment was only possible by simultaneous activation of many hundreds ChR2 expressing granule cells. Future discovery of new genetic markers and new viral delivery methods to label specific neuronal populations will increase the usefulness of in-vitro optogenetics in different systems. In particular, this technique is ideally suited to discover sparse but strong connections between unexpected neuronal subsets11,12. As the variety of uses for this technique grows, so will the need for simple and low-cost hardware to control the light delivered onto in-vitro slices.

This work was supported by the life insurance company "AG2R-La-Mondiale", Ecole des Neurosciences de Paris (ENP), the Agence Nationale de la Recherche "ANR-09-NEUR-004" in the frame of "ERA-NET NEURON" of FP7 program by the European Commission, and the Pasteur Foundation. Sebastien Wagner was supported by the Letten Foundation. 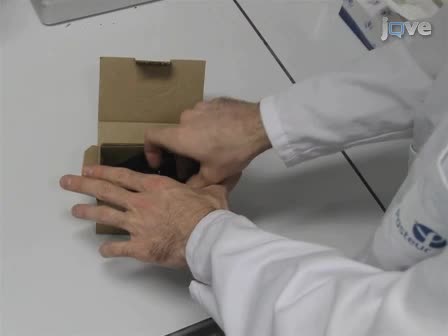