Ovariectomy and subsequent replacement of 17β-estradiol by means of silastic capsules and peroral Nutella are demonstrated in rats and mice.

Estrogens are a family of female sexual hormones with an exceptionally wide spectrum of effects. When rats and mice are used in estrogen research they are commonly ovariectomized in order to ablate the rapidly cycling hormone production, replacing the 17β-estradiol exogenously. There is, however, lack of consensus regarding how the hormone should be administered to obtain physiological serum concentrations. This is crucial since the 17β-estradiol level/administration method profoundly influences the experimental results1-3. We have in a series of studies characterized the different modes of 17β-estradiol administration, finding that subcutaneous silastic capsules and per-oral nut-cream Nutella are superior to commercially available slow-release pellets (produced by the company Innovative Research of America) and daily injections in terms of producing physiological serum concentrations of 17β-estradiol4-6. Amongst the advantages of the nut-cream method, that previously has been used for buprenorphine administration7, is that when used for estrogen administration it resembles peroral hormone replacement therapy and is non-invasive. The subcutaneous silastic capsules are convenient and produce the most stable serum concentrations. This video article contains step-by-step demonstrations of ovariectomy and 17β-estradiol hormone replacement by silastic capsules and peroral Nutella in rats and mice, followed by a discussion of important aspects of the administration procedures.

1. Ovariectomy via the Dorsal Route

3. Peroral Administration of 17β-estradiol via the Nut-cream Nutella

Physiological serum 17β-estradiol concentrations, which the current methods aim to reproduce, are approximately 5-140 pg/mL for rats and 5-35 pg/mL for mice4,6. The subcutaneous silastic capsules according to the instructions above, when administered to 300 g female Sprague-Dawley rats, produce slowly decreasing 17β-estradiol serum concentrations from around 40 pg/mL day 2 to 10 pg/mL day 35. However, immediately after administration, a serum concentration peak around 1000 pg/mL can be expected, falling to the physiological range within 8 hours (Figure 1A)4,5. The silastic capsules for mice described above with 36 μg 17β-estradiol/mL, when administered to 25 g female C57BL/6 mice, render serum concentrations that slowly decrease from approximately 90 pg/mL day 2 to 25 pg/mL day 35. This is probably preceded by a similar peak as was found in the rats, although this has not been investigated (Figure 1B)6.

The peroral Nutella method with the dosages described above, when administered to 300 g female Sprague-Dawley rats, renders physiological levels of 17β-estradiol with daily fluctuations between 10-70 pg/mL (Figure 2A)4. For mice using the above dosage, the daily levels fluctuate between approximately 20 and 120 pg/mL (Figure 2B)6. 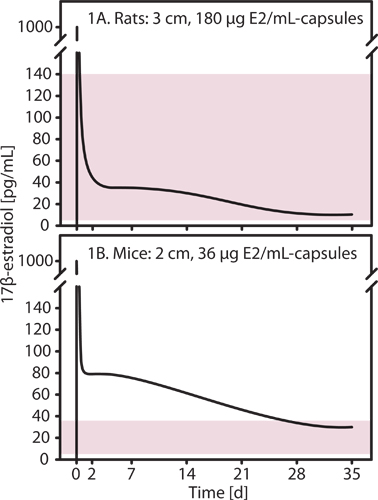 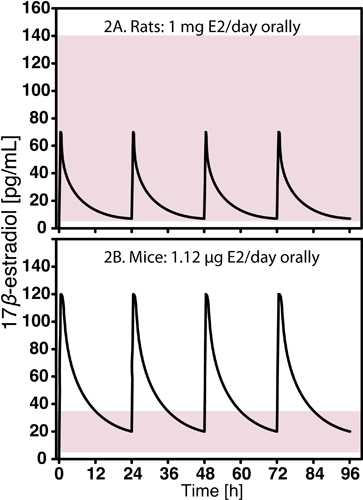 Figure 2. Stylized graphs presenting 17β-estradiol concentrations in rats (A; n=15)4 and mice (B; n=10)6 as a consequence of daily hormone administration in Nutella. The peroral Nutella method renders daily peaks, however not by far as high as produced by subcutaneous or intravenous methods. This mimics the pharmacokinetics of human hormone replacement therapy, and the peroral treatment can proceed for as long as needed, even if the example above only present an initial 96 hours. The shaded areas correspond to physiological 17β-estradiol serum concentrations in intact female rats and mice respectively. Even though not visually demonstrated in the graphs, there is inter-individual variability in the 17β-estradiol concentrations, rendering coefficients of variation from 40 to 132 % in rats and from 13 to 219 % in mice with the Nutella method (very low mean concentrations often generate high coefficients of variation).

The administration modes presented above have in earlier studies proved superior to commercial slow-release pellets and injections in terms of producing physiological serum concentrations of 17β-estradiol. While the slow-release pellets produce very high and prolonged serum concentration peaks, the injections cause extreme, daily hormone fluctuations and require repeated stressful handling of the animals 4-6. The importance of choosing adequate administration modes is highlighted by recent studies indicating that while low-dose 17β-estradiol administration regimens (such as the techniques presented in the current article) protect against cerebral ischemia 8-10, the 17β-estradiol concentrations produced by the commercial slow-release pellets may actually increase the cerebral damage 1,2,11-14. Drinking water administration and oral gavage are two other, less frequent, methods that have been tested. Administering the hormone via drinking water has its greatest benefit in being extremely non-invasive, since almost no animal handling at all is required. However, 17β-estradiol is not soluble in water without an emulsifier, the individual water intake is difficult to control, and if the aim is to reflect the consumption of a pill, another disadvantage is that the mice drink the water during the entire 24 hours. Oral gavage has its greatest drawback in that it is stressful for the animal and may cause esophageal injury, which may affect feeding behavior.

The methods presented here can easily be modified regarding dosage, capsule length etc. For example, it may be warranted to lower both the 17β-estradiol doses in both capsules and Nutella in the mouse regimens to more steadily achieve physiological serum concentrations6. However, if any modifications are made, or if the techniques are used in other strains of animals than already investigated, it is crucial to validate the methods anew by measuring 17β-estradiol concentrations in serum samples. These serum samples must be obtained at several time-points to reflect the entire dose-response relation/curve, and not just a short glimpse. Uterine weights have been used by some authors instead of serum 17β-estradiol concentrations as a measure of the biological effects of 17β-estradiol. However, evidently uterine weights reflect the specific effects of estrogens on the endometrium and do not necessarily reflect the effects of estrogens on other systems . Further, uterine weight is only weakly correlated to serum estrogen levels 4,6.

Daily consumption of large quantities of energy-rich Nutella could cause weight gain. However, the small amounts described above only correspond to less than 5% of the animals' daily energy intake and excessive weight gain has not been observed in our studies using Nutella.

The crucial difference in working with rats and mice merits special emphasis. Even though strict hygiene is pivotal regardless of animal species, mice sensitivity to infections calls for scrutiny at even higher level than when working with rats. For example, careful disinfection of the skin prior to incision, frequent change of medical gloves and the use of sterile surgical tools must not be compromised. Implants are always hotbeds for infections. The animals must therefore be regularly examined for signs of infection after capsule implantation. If an abscess is formed around the implant, we recommend that the animal is euthanized or that the capsule is removed, the wound meticulously cleaned, and another capsule reinstated through a new incision. Further, the skin on mice's backs is much more fragile than in rats, warranting two weeks of convalescence after ovariectomy before capsule administration.

The methods presented above can also be used for other substances than 17β-estradiol. However, it is important that the pharmacokinetics and dosages of each regime is carefully characterized, preferably by consecutive serum measurements of the administered substance.

The study was funded by Linköping University and the County Council of Östergötland. 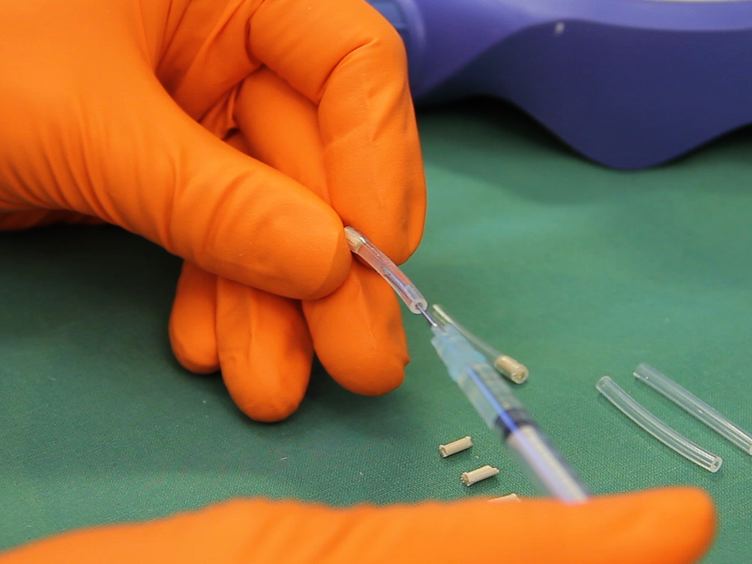