Locomotor activity (LMA) is a simple and easily performed measurement of behavior in mice. Coupling of video tracking software (VTS) and LMA allows for the improvement of specificity and sensitivity, especially when compared with the manual, line crossing method of LMA analysis. Additionally VTS allows long-term tracking of mouse LMA.

Locomotor activity (LMA) is a simple and easily performed measurement of behavior in mice and other rodents. Improvements in video tracking software (VTS) have allowed it to be coupled to LMA testing, dramatically improving specificity and sensitivity when compared to the line crossings method with manual scoring. In addition, VTS enables high-throughput experimentation. While similar to automated video tracking used for the open field test (OFT), LMA testing is unique in that it allows mice to remain in their home cage and does not utilize the anxiogenic stimulus of bright lighting during the active phase of the light-dark cycle. Traditionally, LMA has been used for short periods of time (mins), while longer movement studies (hrs-days) have often used implanted transmitters and biotelemetry. With the option of real-time tracking, long-, like short-term LMA testing, can now be conducted using videography. Long-term LMA testing requires a specialized, but easily constructed, cage so that food and water (which is usually positioned on the cage top) does not obstruct videography. Importantly, videography and VTS allows for the quantification of parameters, such as path of mouse movement, that are difficult or unfeasible to measure with line crossing and/or biotelemetry. In sum, LMA testing coupled to VTS affords a more complete description of mouse movement and the ability to examine locomotion over an extended period of time.

1. Short-term LMA Set Up and Procedure

An example of results from a repeated measures, short-term LMA test is shown in Figure 1. This figure shows that after lipopolysaccharide (LPS) administration, mice housed in individually ventilated caging (IVC) recover short-term locomotor activity faster than mice housed in ambient environment caging (AEC) 6. While the initial loss of locomotor activity is similar between LPS injected groups, the recovery to basal LMA is more rapid in IVC-housed mice as was velocity of movement (Figure 1b) and duration of movement (Figure 1c). The use of a repeated measures model with this short-term LMA test allows the observation and comparison of recovery over time between different groups.

A long-term LMA test example is shown in Figure 2. This figure demonstrates mouse locomotion during 12 hr of daily testing over 2 separate but consecutive days. No significant difference in distance moved (Figure 2a), velocity of movement (Figure 2b) or duration of movement (Figure 2c) was found between these 2 days (unpublished pilot data). While there is a significant amount of error due to a small sample size, these results illustrate that consistent and repeatable data can be generated over the course of consecutive days, allowing the potential for longer-term locomotion studies to be performed without the need of implanted transmitters and biotelemetry. Although underpowered, the 1 day versus 2 day difference in distance moved (Figure 2a) appears due to a dissimilarity in the duration of movement (Figure 2c) and not to a difference in velocity (Figure 2b). 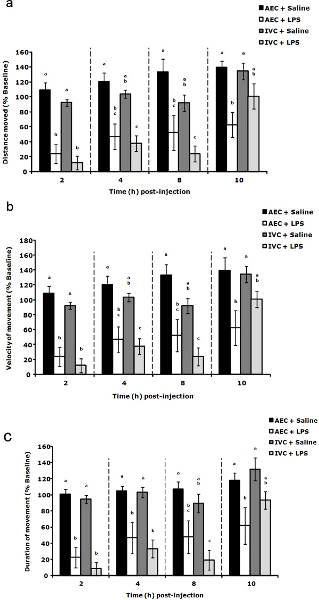 Symptoms of sickness in mice include lethargy, loss of interest in social and environmental surroundings, malaise and anorexia 2-3. In mice and other rodents, LMA can be used to evaluate sickness after immune activation 4-5. Additionally, long-term LMA offers the ability to track movement over a 24 hr (or greater) period, allowing analysis of treatment-induced alterations in circadian behavior or disturbances in sleep/wake patterns. LMA offers several advantages over other tests for sickness since it is non-invasive, easily performed as a repeated measure or continuous modality and is minimally confounding. Compared with other methods and systems (e.g. Phenotyper, Intellecage, photobeam systems), LMA analysis with VTS is relatively inexpensive because multiple cages can be recorded/analyzed simultaneously. Although not utilized here, additional analysis of LMA activities like rearing and wall climbing can be achieved through use of a side-mounted camera. With VTS, LMA is high-throughput adaptable. VTS also allows for a more thorough examination of movement including the determination of duration, distance, velocity and path 5. Path tracking is especially powerful since it underlies anxiety behaviors.

Despite its many advantages, a potential pitfall inherent to LMA with VTS is the isolation/single housing of mice for up to (and possibly exceeding) 24 hr. Social isolation can induce a stress response and aggression when prolonged 11. Investigators should be aware of this limitation and take measures to ensure proper experimental control and result interpretation.

During all behavioral testing, including mouse LMA, close attention to pre-experimental considerations is critical to achieving consistent results. Acclimatization to the testing room and test cage environments is essential. Aberrant noise, light and sound are especially interfering as they may provoke a startle response and/or anxiety behavior 7-8. Ideally, LMA testing should occur in a temperature and humidity controlled environment free of noxious odors (especially natural predator odors). A fixed behavioral testing suite that allows for housing of animals for extended periods of time (days) is desirable. The ability to return mice to the animal care facility is advantageous since repeated testing is very useful in the study of aging or chronic diseases.

Authors declare no conflicts of interest. 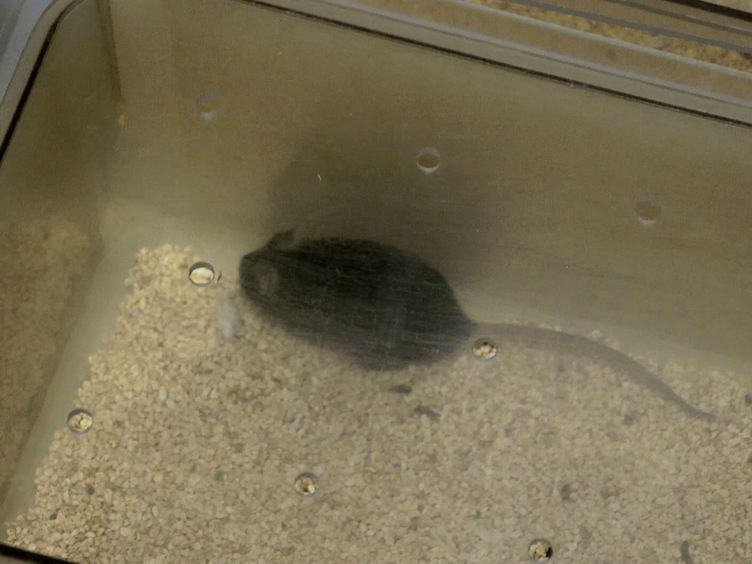