We used retinal samples from retinectomy for a transcriptomic analysis of retinal detachment. We developed a procedure that allows RNA conservation between the surgical blocks and the laboratory. We standardized a protocol to purify RNA by cesium chloride ultracentrifugation to assure that the purified RNAs are suitable for microarray analysis.

Retinal detachment (RD) describes a separation of the neurosensory retina from the retinal pigmented epithelium (RPE). The RPE is essential for normal function of the light sensitive neurons, the photoreceptors. Detachment of the retina from the RPE creates a physical gap that is filled with extracellular fluid. RD initiates cellular and molecular adverse events that affect both the neurosensory retina and the RPE since the physiological exchange of ions and metabolites is severely perturbed. The consequence for vision is related to the duration of the detachment since a rapid reapposition of the two tissues results in the restoration of vision 1. The treatment of RD is exclusively surgical. Removal of vitreous gel (vitrectomy) is followed by the removal non essential part of the retina around the detached area to favor retinal detachment. The removed retinal specimens are res nullius (nothing) and consequently normally discarded. To recover RNA from these surgical specimens, we developed the procedure jouRNAl that allows RNA conservation during the transfer from the surgical block to the laboratory. We also standardized a protocol to purify RNA by cesium chloride ultracentrifugation to assure that the purified RNAs are suitable for global gene expression analysis. The quality of the RNA was validated both by RT-PCR and microarray analysis. Analysis of the data shows a simultaneous involvement of inflammation and photoreceptor degeneration during RD.

The main therapeutic objective in retinal detachment (RD) is to find a way to limit photoreceptor cell damage and retinal inflammation resulting from the separation of the photoreceptors from the retinal pigmented epithelial cells. During RD, RPE cells are activated, migrate, dedifferentiate, and proliferate at the surface of the detached retina, exerting contractile forces leading to complications. Transcriptomics analysis of RD is a way to identify target genes with modified expression following RD and hence future therapeutic molecules that could improve final visual outcome in combination with surgery. It is well known ribonucleic acid (RNA) is not stable as is deoxyribonucleic acid (DNA), the latter being used extensively for genetic studies, its stability had permitted the sequencing of the Neanderthal genome from paleontological samples of more than 30,000 years old 2. Transcription of DNA of the genes from the genome into messenger RNA is the major process in gene expression, and the mRNA is labile in order to constitute a signal. RNAs are very rapidly degraded by RNAse enzymes which terminate the signal. When tissues are isolated from an organism, the RNAs are very often degraded before the expression is studied in a research laboratory. Degraded RNA is not suited for analysis gene expression. Because the laboratory staff cannot participate in surgery, we developed a procedure that is easy and only requires that the surgeon to recover the tissues into an appropriate RNAse-free solution. The RNA of the tissues is stable and can be analyzed without any sign of degradation after 72 hr at room temperature in this solution. The RNAs from specimens are purified by a standardized method involving an ultracentrifugation on a cesium chloride gradient after having been transferred to the laboratory 3. Then, quality of the RNAs are assessed by agarose gel electrophoresis and by RT-PCR. The RNA purification protocol has the advantage of separating the molecules according to their density that is different for DNA and RNA and assures that the RNA is not contaminated by a DNA molecules that will generate artifactual signals in gene expression studies. In addition, the transfer RNAs (tRNAs), which are quantitatively the most abundant RNA within a cell, are separated according to the same physical property from the ribosomal RNA (rRNAs) and the messenger RNAs (mRNAs), those two last one being the end product of the purification process. The removal of tRNA from the preparation is useful since most of the microarray analytical protocols involved the use of reverse transcriptases and RNA polymerases which are inhibited by tRNA 4-6. The purified RNA from surgical specimens are labeled using standard protocol and hybridized to a microarray chip and the results are analyzed using two complementary methods, the false discovery rate method, and using a novel method based on mutual information and visualized on the web-based server Retinobase 7,8.

1. jouRNAl: Procedure to Recover the Specimens from the Surgical Block

4. Final Purification of the RNA

The procedure jouRNAl (Figure 1) allows us recover specimens of retina from the surgical block to purified RNA, and to analyze the transcriptome of retinal detachment. Retinal detachment results in the upregulation of the monocyte chemotactic MCP1 gene CCL2, and in the decrease in expression of the rod photoreceptor transducing gene GNAT1, the short wave cone opsin OPN1SW, and the homeogene CRX (Figure 2). The induction of CCL2 is resulting from inflammation 9, while the concomitant reduction of GNAT1, OPN1SW and CRX is the result of photoreceptor degeneration, both rods and cones. The loss of cones may result from the loss of expression of NXNL1, which encodes for a Rod-derived Cone Viability Factor 7,10, or its paralogue RdCVF2, which is encoded by the NXNL2 gene. Surprisingly, the NXNL2 messenger exists in two different versions. Version 1 (NM_001161625.1) is a coding sequence derived from phylogenic analysis but has not been previously reported to be expressed 11, while version 2 (NM_145283.2), for which several ESTs has been identified is an abnormal mRNA that excludes the second exon of the gene and contains a alternative second exon, containing a repetitive Alu sequence, located more than 40 kb in the 3' direction (Figure 3a). Using RNA purified from Human retina, we can now reported that the two versions of the NXNL2 mRNA are expressed (Figure 3b). 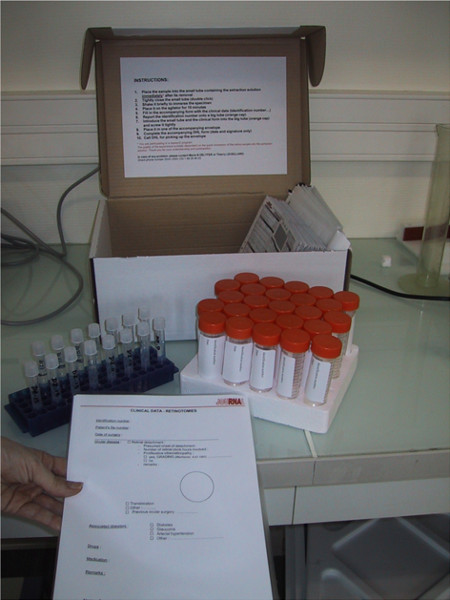 Figure 1. Picture of the cardboard box containing the material provided by jouRNAl. 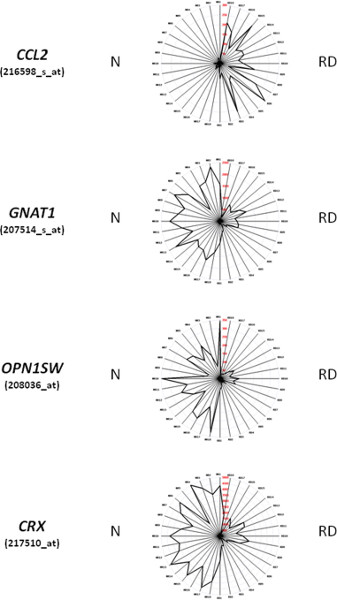 Figure 2. Representation of the expression of a subset of genes using Retinobase. For the genes displayed in these radar graphs, CCL2, GNAT1, OPN1SW, and CRX, the right part of the figure corresponds to RNA from specimens of retinal detachments (RD1-18), while the left part (NR1-18) are RNA from age-matched controls prepared using post-mortem retinas. The radar graph method is described in 8. 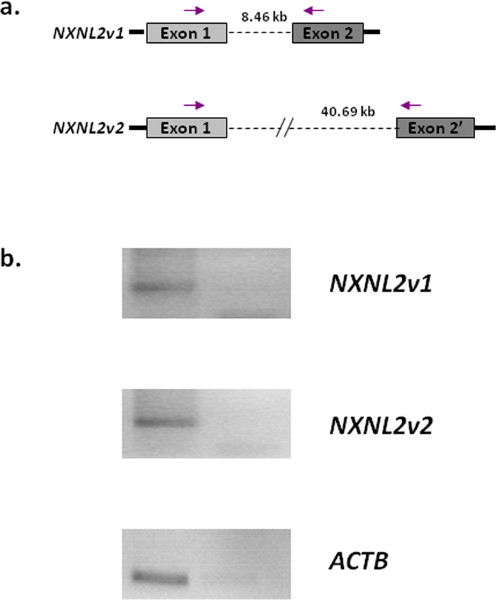 Figure 3. Expression of the two version of the NXNL2 gene in the retina. a. Schematic representation of the NXNL2 gene on chromosome 9. NXNL2v1 has two exons that are predicted by multiple alignment and phylogenic analysis. NXNL2v2 is missing that second exon and includes an alternative exon 2', located >40 kb in the 3' direction. The arrows show the position of the primer used. b. RT-PCR showing the expression of both NXNL2v1 and NXNL2v2 in the retina. The right lanes correspond to reaction in the absence of reverse transcriptase. ACTB, cytoplasmic actin. Primers used: NXNL2v1: 5'-GCATGAGCTGAGGAAGAGGT-3', 5'-CTCA AACGGAGAAATTCTGGA-3', NXNLv2: 5'-TCTGCACCCCCACGTTTATT-3', 5'-AGGGCCTCCT TTTCCATCTA-3'.

The development of a procedure for tissue recovery from the surgical block has been essential to the transcriptome analysis of retinal detachment. One should notice that this type of surgery is practiced in emergency and that the ophthalmologists operating have little time to participate in a biological research program when they operate. This retinectomy is also performed stochastically in each service, so that the easier way to reach statistical numbers is to work with a network. In such network, the standardization of the tissues collection is essential the success of the biological analysis. By providing a material, very easy to use and precise instructions, that can be stored at room temperature in a surgery cabinet, close to the surgical block, we have encouraged the surgeons to participate in our study.

In addition, the standardization of the purification of the RNA was achieved to get the best of these precious clinical specimens. The collections of pure RNAs can be stored for years at -80 °C and would be used for further studies as novel genomics technologies emerge. The protocol is provided for retinal surgical specimen but can also be used successfully to isolate RNA from rodent retina after dissection. If the RNA are degraded, a) check the pH of the CsCl/EDTA solution. b) make all the solutions from unused chemicals. The main limitation of the technique is the quantity of starting material which should correspond to at least 50,000 cells.

What distinguishes the method used here from most commercial reagents provided to isolate total RNA is the degree of purity. RNA is depleted of any DNA contamination which eliminates the need of using DNAse treatment that can be damaging to any further procedure. In addition, the total RNA preparations are here depleted in tRNA, that are known to be potent inhibitors of RNA polymerases that are commonly used in the amplification step before hybridization to microarray chips. We have observed that the probes synthesized from these RNA preparations have a very high specific activity. The degree of purity of the RNA prepared following the method described here is very well suited for microarray hybridization, but also for constructing cDNA libraries of high quality and for RNA sequencing as we have observed. The laboratory should be RNAse free. The pH of the CsCl/EDTA should be acidic to avoid the degradation of the RNA by alkaline lysis. The density of the CsCl/EDTA should be carefully verified in order not to be too high and to prevent the sedimentation of RNA.

We thank Sacha Reichman and Dominique Santiard-Baron for their help in editing the RNA purification protocol. 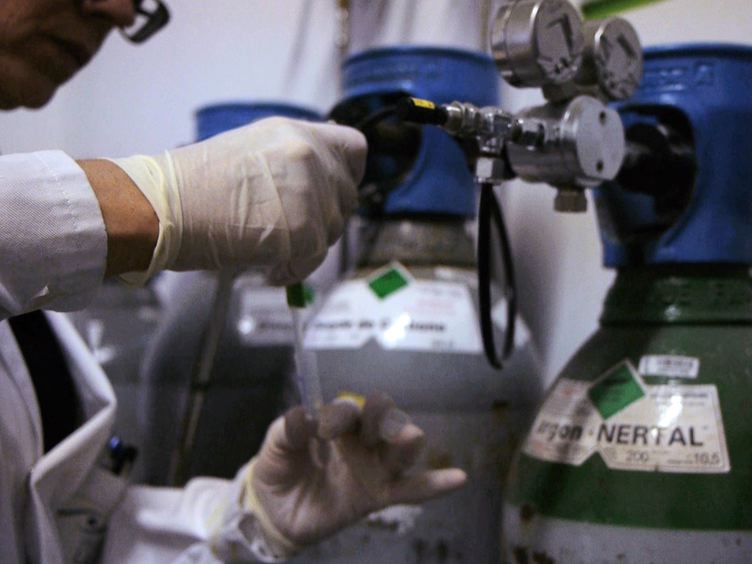