Pluripotent stem cells, either embryonic or induced pluripotent stem (iPS) cells, constitute a valuable source of human differentiated cells, including cardiomyocytes. Here, we will focus on cardiac induction of iPS cells, showing how to use them to obtain functional human cardiomyocytes through an embryoid bodies-based protocol.

In order to investigate the events driving heart development and to determine the molecular mechanisms leading to myocardial diseases in humans, it is essential first to generate functional human cardiomyocytes (CMs). The use of these cells in drug discovery and toxicology studies would also be highly beneficial, allowing new pharmacological molecules for the treatment of cardiac disorders to be validated pre-clinically on cells of human origin. Of the possible sources of CMs, induced pluripotent stem (iPS) cells are among the most promising, as they can be derived directly from readily accessible patient tissue and possess an intrinsic capacity to give rise to all cell types of the body 1. Several methods have been proposed for differentiating iPS cells into CMs, ranging from the classical embryoid bodies (EBs) aggregation approach to chemically defined protocols 2,3. In this article we propose an EBs-based protocol and show how this method can be employed to efficiently generate functional CM-like cells from feeder-free iPS cells.

Historically, the investigation of the genetic and molecular mechanisms driving human development and disease has been based on the generation of genetically modified animal models. However, numerous human phenotypes fail to be successfully replicated in mice, mainly because of the biological differences existing between the two species. On the other hand, access to human tissues may be limited and often do not allow enough material to be obtained for in-depth experimental studies. The field of cardiovascular biology suffers from both these limitations: the physiology of the human heart is significantly different from that of the mouse, and a significant quantity of heart tissue is accessible only post-mortem or during heart surgery. Finding an optimal source for the differentiation of functional human CMs has therefore become a central topic in cardiovascular biology, and much effort has been made to address this issue. Various cells types have been proposed, including skeletal myoblasts, local cardiac stem cells, bone marrow mononuclear cells, endothelial progenitors, and mesenchymal stem cells. However, data obtained using these cells have not been consistent 4.

The derivation of human embryonic stem cells (ESC) first 5 and the groundbreaking discovery of induced pluripotent stem (iPS) cells by Yamanaka and Thomson 6,7 later seemed to provide solutions: these cells have the ability to grow indefinitely and the potential to give rise to all cell derivatives of the three germ layers, including the CMs. The use of iPS cells offers further advantages: being derived from autologous adult cells, they carry the same genome as the individual or patient from which they are derived. They therefore allow the development of in vitro models that facilitate the investigation of human genetic diseases and mechanisms of development. In virtue of this characteristic, iPS cells can also overcome problems related to immune rejection and ethical issues 8. For these reasons, even though ESCs still represent the gold standard in the field of stem cell biology, researchers worldwide are now moving more toward iPS cell technology.

iPS cells are now being employed to model human disease in vitro for various conditions, including congenital cardiovascular disorders 9,10. Recently, application of iPS cell disease modeling has been performed for monogenic cardiac disorders (i.e. long QT syndromes, catecholaminergic polymorphic ventricular tachycardia) and pathologies in which cardiac defects are part of a complex phenotype (i.e. Leopard and Timothy syndromes, dilated cardiomyopathy). These reports confirmed that patient-specific iPS cells that are differentiated into CMs display similar phenotypic and functional characteristics as the disease in vivo.

However, there are still many challenges to improve the efficacy of inducing the iPS cells into the cardiac lineage. Spontaneous generation of CMs from human ESCs via aggregate formation called embryoid bodies (EBs) have proven successful 17. Since this discovery, many other methods have been proposed. Many groups have greatly enhanced the efficiency of the differentiation protocol and have moved toward chemically defined and animal-product-free culture reagents (see Mummery, C., et al., Circulation Research (2012) for a comprehensive review of all existing methods 3).

Nevertheless, the classical method based on EB aggregation still represents the most commonly employed for performing functional studies and investigating disease mechanisms. Our proposed protocol is based on the aggregation of iPS cells into EBs and culture in the presence of serum and ascorbic acid, which has been shown to enhance the cardiac differentiation process and to positively impact the maturation of these cells 18,19. In this article we will go through this methodology in detail and will show how to use feeder-free iPS cell lines for generating patient-specific iPS-derived CMs.

Note: Matrigel stock concentrations vary by the batch. Dilution instructions are indicated on the data sheet.

Note: Complete H-ESM conditioned on mouse embryonic fibroblasts may be used instead of mTESR1 or Nutristem for iPS cells.

Note: The size of the colonies affect the differentiation process, controlling efficiency and timing of cardiac induction. Aggregation of homogeneously-sized EBs have been shown to reduce the variability observed during differentiation.

Note: Efficiency of the differentiation process is highly dependent on several factors, the most critical of which are the specific cell lines and the batch of serum used to induce cardiac differentiation. To obtain the highest efficiency, test cell lines for cardiomyogenic potential and various batches of serum.

Note: If smaller beating clumps are needed, pipette the explanted area up and down several times under the stereomicroscope, until it breaks into smaller pieces. This will result in clusters of a few beating cells (see movie 3).

Note: Cardiomyocytes obtained from this protocol possess fetal-like morphological and functional characteristics; maturation towards an adult-like phenotype may be obtained by increasing the time in culture to further differentiate these cells.

In our studies we generated CMs from several iPS cell lines. These lines were initially generated on an MEF feeder layer but were immediately placed on Matrigel using a defined medium (either mTESR1 or Nutristem). Various assays were used to verify maintenance of the morphological properties, the expression of markers typical of pluripotent cells (OCT-4, SSEA4 and TRA1-60) and their genome stability (Figure 1).

Induction into the cardiac lineage was triggered by aggregation of iPS cells into EBs and culture in the presence of a specific type of serum and AA (Figures 2A and 2B). Contracting areas represented 20-35% of the total, depending on the cell line used (Figure 2C and Movie 1). Contracting CMs isolated from these regions by enzymatic digestion (Movie 2) expressed typical cardiomyocyte structural proteins (cardiac troponin, α-sarcomeric actin, myosin heavy chains α and β), gap junction proteins (connexin-43), and the major ion channels (Figures 2D-2F). Electrophysiological analysis of these cells revealed a heterogeneous population comprising cells with nodal, atrial, and ventricular profiles (data not shown, Priori, S.G., et al., J. Clin. Invest., In Press, 14,15,20). 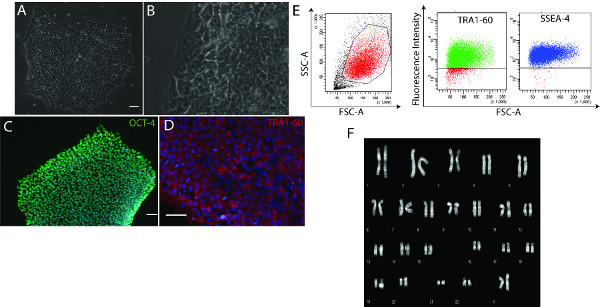 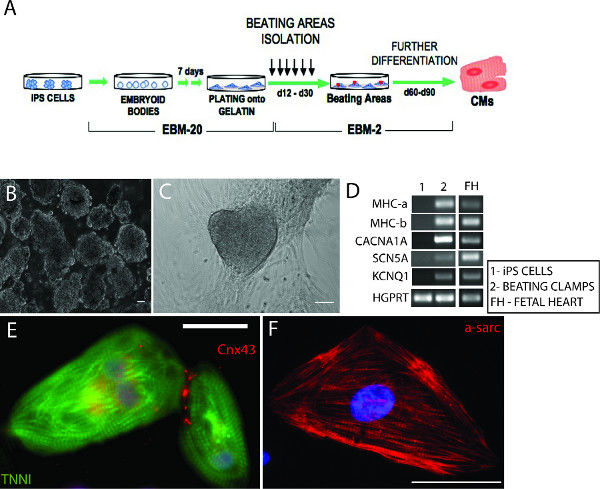 Pluripotent stem cells have the potential to differentiate spontaneously into CMs, albeit with low efficiency and high variability among lines. The development of novel induction methods has therefore focused on improving the efficiency of the process and moving toward more defined protocols. However, most of these new differentiation methods are quite complex, requiring elaborate culture conditions, fine control of timing and concentration of reagents, and treatment with expensive cytokines and growth factors. Also, differences in the endogenous cytokine signaling levels of various iPS cell lines render it difficult to standardize cytokine concentrations, which often must be adjusted to appropriate levels for each cell line.

Maturation of the obtained iPS-derived CMs also represents a critical aspect to consider when attempting cardiac differentiation of iPS cells for disease modeling and drug discovery applications. The differentiation of human ESCs and iPS cells usually gives rise to CMs with a fetal phenotype i.e. without a completely mature structure. This is particularly true when monolayer approaches are used, and as a result these are more suitable for generating, amplifying, and isolating specific cardiac progenitor populations 2,3.

In this scenario, the "classical" EBs aggregation method, which is still widely used for disease modeling purposes, seems to better fit the experimental needs. This method is straightforward, economical, easily practicable, and suitable for all lines. There is no need for additional growth factors or cytokines, or for single-cell digestion, which are often not very well tolerated by iPS cells; also, they require additional treatments with ROCK inhibitors 21. Furthermore, the aggregation into EBS resembles the natural developmental process of a pluripotent cell, with the EBs providing a 3-dimensional environment and paracrine signals that are more similar to physiological conditions. Moreover, the addition of AA has been shown consistently to enhance cardiac differentiation of iPS cells, and also to improve their structural and functional maturation 18,19. Choosing iPS cell lines based on their cardiogenic potential, together with the selection of the most appropriate batch of serum, may further improve the efficiency of CM generation.

Finally, the method proposed here has also the advantage of not requiring mouse feeder cells, which eliminates the possibility of contamination with mouse cells and also further simplifies the technical procedures for iPS cell passaging and EBs formation. This method confers numerous advantages and constitutes a significant improvement over prior techniques, opening the way to future cardiovascular regenerative medicine applications.

No financial interests to disclose. 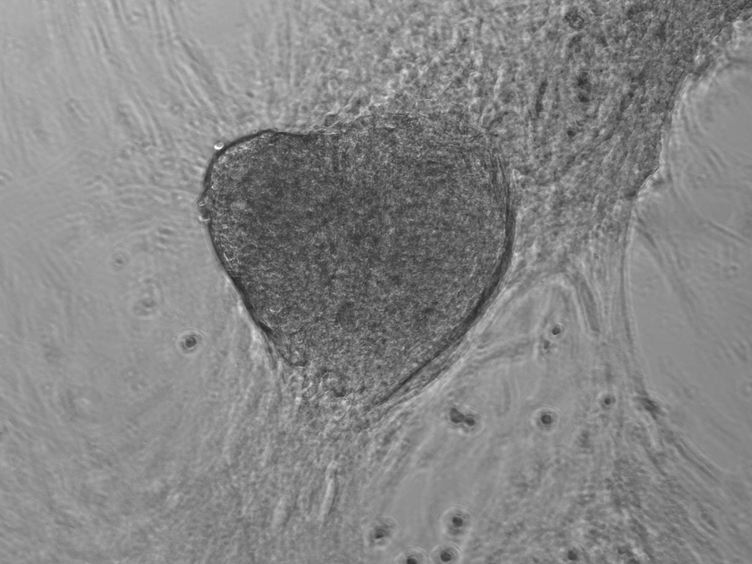