A procedure that allows a demonstration of robust augmentation of drug seeking in food-restricted rats is described. Following heroin self-administration training, rats go through an abstinence period, in a drug-free environment, during which they are mildly food restricted. Drug seeking is then tested in the drug-associated environment.

In human drug addicts, exposure to drug-associated cues or environments that were previously associated with drug taking can trigger relapse during abstinence. Moreover, various environmental challenges can exacerbate this effect, as well as increase ongoing drug intake.

The procedure we describe here highlights the impact of a common environmental challenge, food restriction, on drug craving that is expressed as an augmentation of drug seeking in abstinent rats.

Rats are implanted with chronic intravenous i.v. catheters, and then trained to press a lever for i.v. heroin over a period of 10-12 days. Following the heroin self-administration phase the rats are removed from the operant conditioning chambers and housed in the animal care facility for a period of at least 14 days. While one group is maintained under unrestricted access to food (sated group), a second group (FDR group) is exposed to a mild food restriction regimen that results in their body weights maintained at 90% of their nonrestricted body weight. On day 14 of food restriction the rats are transferred back to the drug-training environment, and a drug-seeking test is run under extinction conditions (i.e. lever presses do not result in heroin delivery).

The procedure presented here results in a highly robust augmentation of heroin seeking on test day in the food restricted rats. In addition, compared to the acute food deprivation manipulations we have used before, the current procedure is a more clinically relevant model for the impact of caloric restriction on drug seeking. Moreover, it might be closer to the human condition as the rats are not required to go through an extinction-training phase before the drug-seeking test, which is an integral component of the popular reinstatement procedure.

One of the major difficulties in the treatment of drug addiction is the high rate of relapse, even after prolonged periods of abstinence1,2. Studies in human addicts have identified a critical contribution of environmental challenges, such as the exposure to drug-associated discrete cues or environments3 and stressful life events4, to relapse. A common environmental challenge that was found to have an effect on drug taking and craving is chronic food restriction. For example, it has been reported that chronic caloric restriction is associated with increased cigarette smoking5. Furthermore, dieting severity (caloric restriction) is positively correlated with an increased prevalence of drug use in young women6. However, the underlying brain mechanisms are not fully understood.

Due to practical and ethical considerations related to human research, animal models have been developed to identify the relevant neural mechanisms. We have previously used the reinstatement procedure7,8 to demonstrate resumption of extinguished drug seeking in rats that are exposed to acute (24-48 hr) food deprivation9,10. However, an integral part of the reinstatement procedure is an extinction period that is not a common feature of drug addiction treatments11 (but see Epstein et al.12 for a comprehensive discussion on the validity of the reinstatement procedure). Moreover, in the particular case of dietary manipulations in humans, only chronic food restriction, but not acute food deprivation, was shown to effectively increase drug-taking5,13.

Consequently, we have suggested an "abstinence procedure"14 that allows the study of the effects of chronic food restriction on drug seeking. Using this procedure we have recently demonstrated a robust augmentation of heroin seeking in abstinent rats following exposure to 14 days of mild food restriction15.

All rats are treated in accordance with the guidelines of the Canadian Council on Animal Care and approval for all the experimental procedures was granted by the Concordia University Animal Research Ethics Committee.

The timeline for the procedure of food restriction-induced augmentation of heroin seeking is presented in Figure 1.

Figure 1. A timeline of the experimental procedure. The procedure consists of three phases. Animals are first trained to self-administer a drug in the presence of a cue/tone complex (heroin self-administration phase), then moved to a different context and undergo a one-day drug washout period. Washout day is followed by a prolonged period of abstinence, where rats are given a regimen of food restriction or unlimited access to food. On the 14th day of abstinence, rats are returned to the self-administration environment for a drug-seeking test in the presence of drug-paired cues under extinction conditions (drug-seeking test phase). Click here to view larger image. 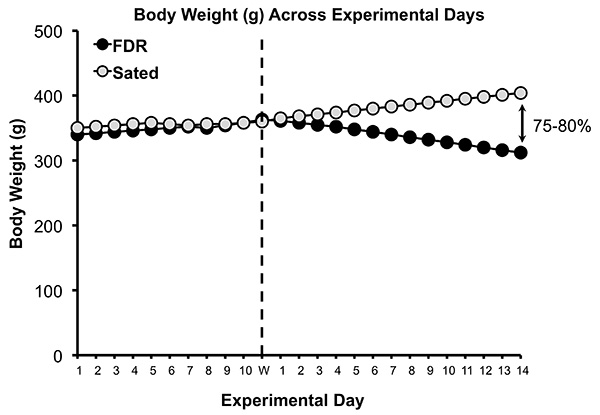 Figure 2. Body weights in the food restricted (FDR) and Sated groups, across experimental days. All rats undergo 10 days of heroin self-administration training in operant training chambers and a 1 day drug washout in the animal care facility. Rats are matched according to body weight, active lever responding and drug infusions before separation into the FDR or Sated group. Click here to view larger image. 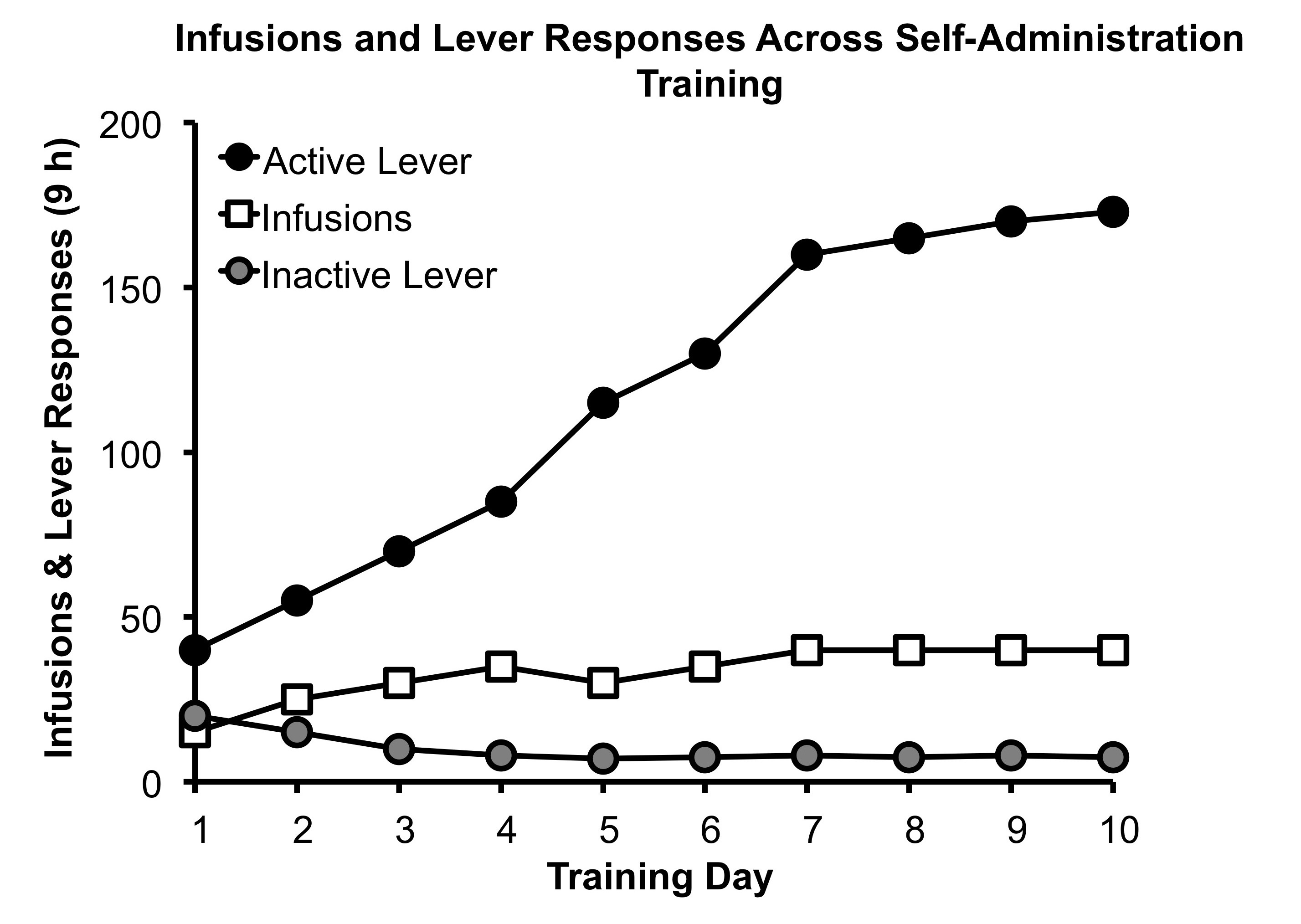 Figure 3. The number of infusions, active, and inactive lever responses made during heroin self-administration training. Heroin (0.13 mg/kg/infusion) is self-administered in three 3 hr sessions, over 10 days, under a FR-1, 20 sec time out schedule of reinforcement. Click here to view larger image. 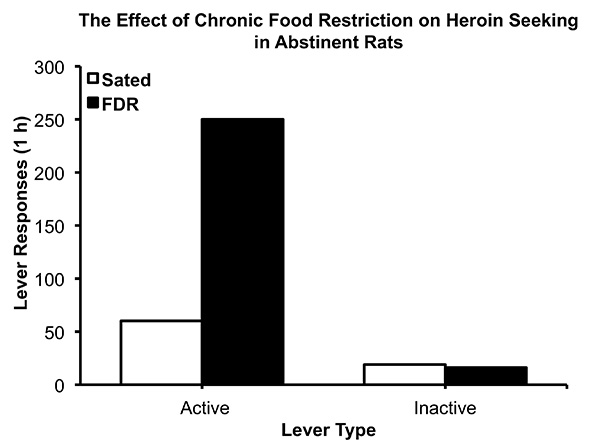 The procedure described here has strong face validity because 1) it allows for voluntary drug intake and control over drug administration, 2) it uses a route of administration that is common in human addicts, 3) it reflects (relatively) prolonged periods of drug exposure and abstinence, and 4) it avoids the extinction training before the drug-seeking test that is integral to the reinstatement procedure but is rarely observed in human addicts14. In addition, the procedure models a prolonged food restriction condition that is thought to be critical when considering the effects of caloric restriction on drug seeking5.

In the protocol we describe here, the rats are housed in the operant conditioning chambers through the drug self-administration period (24 hr/day). It might be possible to increase the efficiency of data collection by using a "squads" protocol in which the rats are transferred back to the ACF after a single daily training session, allowing for multiple groups to be trained every day. However, this approach might be more suitable for cocaine training, since heroin is preferably administered in the "home" environment16. We have not assessed the efficiency of the procedure using the squads option. Another way to increase the throughput of the procedure is by staggering the drug self-administration training for two groups of rats by 10-12 days. Using this design, rats in the second group are trained for self-administration while the first group goes through the abstinence period in the ACF. Drug self-administration training for the second group must be concluded at least a day before the planned test for the first group to allow for thorough cleaning of the chambers.

We have reported before15 that the length of the restriction period is critical, with 3-5 days of food restriction failing to augment heroin seeking at the end of the abstinence period. We have not observed an increase in the efficacy of the food restriction manipulation with increased exposure periods (~28 days; unpublished data).

It is also worth noting that the change in context between the self-administration phase and the abstinence period seems to be important for the augmentation of drug seeking. We have collected data that suggest a much-reduced effect for food restriction when the rats are maintained in the drug-training environment during the abstinence period (unpublished observation).

Approval for all the experimental procedures was granted by the Concordia University Animal Research Ethics Committee, in accordance with the guidelines of the Canadian Council on Animal Care. The authors declare that they have no competing financial interests. FS and TD equally contributed to the development of the procedure presented here and to the writing of the manuscript.

This work was supported by the Natural Sciences & Engineering Council Discovery Program (US: 298915), the Fonds de Recherche du Quebec - Santé (CSBN), and the Canada Research Chairs Program (US). 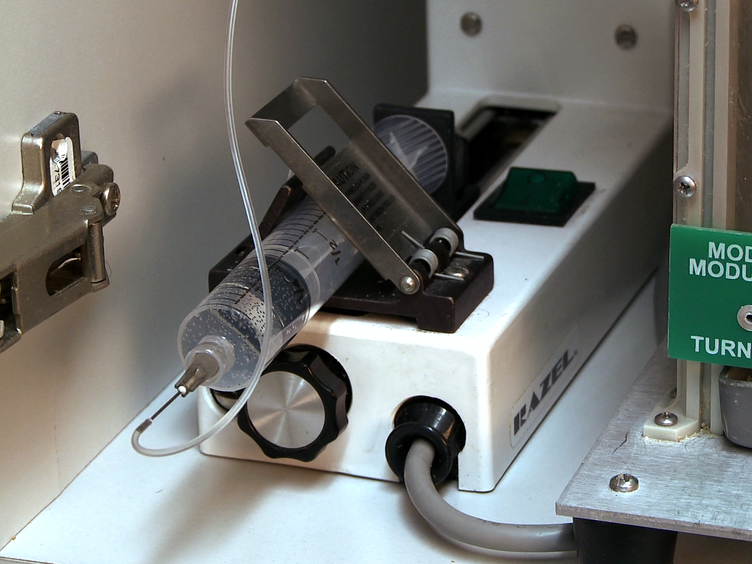