Using a pneumatic bioreactor, we demonstrate the assembly, operation, and performance of this single-use bioreactor system for the growth of mammalian cells.

Recent advances in mammalian, insect, and stem cell cultivation and scale-up have created tremendous opportunities for new therapeutics and personalized medicine innovations. However, translating these advances into therapeutic applications will require in vitro systems that allow for robust, flexible, and cost effective bioreactor systems. There are several bioreactor systems currently utilized in research and commercial settings; however, many of these systems are not optimal for establishing, expanding, and monitoring the growth of different cell types. The culture parameters most challenging to control in these systems include, minimizing hydrodynamic shear, preventing nutrient gradient formation, establishing uniform culture medium aeration, preventing microbial contamination, and monitoring and adjusting culture conditions in real-time. Using a pneumatic single-use bioreactor system, we demonstrate the assembly and operation of this novel bioreactor for mammalian cells grown on micro-carriers. This bioreactor system eliminates many of the challenges associated with currently available systems by minimizing hydrodynamic shear and nutrient gradient formation, and allowing for uniform culture medium aeration. Moreover, the bioreactor’s software allows for remote real-time monitoring and adjusting of the bioreactor run parameters. This bioreactor system also has tremendous potential for scale-up of adherent and suspension mammalian cells for production of a variety therapeutic proteins, monoclonal antibodies, stem cells, biosimilars, and vaccines.

Mammalian cells lines can be classified into one of three categories based on their growth characteristics: cells that grow in suspension, cells that grow as aggregates, and cells that grow anchored to a substrate. Although the air-wheel bioreactor demonstrated in this video is able to grow all three types of cells, this video will demonstrate use of the bioreactor to grow anchorage dependent cells on micro-carriers. Anchorage dependent mammalian cells can be grown for the purpose of producing more cells — where the cells themselves are the product. For example, human bone marrow derived mesenchymal stem cells are currently being cultivated with the purpose of harvesting the cells and injecting them into diseased tissue. The pneumatic bioreactor demonstrated in this video has proven suitable for the production of such mesenchymal stem cells for this application (Serra et al., personal communication, 2013).

Anchorage dependent mammalian cells are typically grown small scale in 2D culture vessels such as cell culture plates, cell culture flasks, or roller bottles, where they adhere to a specially treated growth surface1. When more cells are desired, the plates or flasks can be expanded by using more or larger vessels. However, for more cost-effective cultivation of large quantities of anchorage dependent cells, increasing the surface area for cell attachment can be accomplished by using small solid beads called micro-carriers. Depending on the attachment characteristics of the cell, several different types of micro-carriers are commercially available, such as dextran, peptide, or collagen coated. Micro-carriers have a large surface area to volume ratio providing a larger surface area for cell growth; and the micro-carriers can be maintained in suspension with agitation, which allows the cells to be cultivated to high densities in bioreactor systems2. Currently, the types of bioreactors where adherent cells are grown on micro-carriers include spinner flasks and stirred tank systems, which use axial impellers to maintain suspension of the cell coated micro-carriers.

Several factors are important to the successful cultivation of cells including oxygen tension, shear stress, surface matrix, and nutrient and metabolite concentrations. The use of bioreactors allows for real-time monitoring of the growth conditions and the potential to significantly lower production costs1. There are several common bioreactor designs for in vitro cell cultivation including, stirred suspension, rotating wall vessel, hollow-fiber, bag bioreactor on a rocker platform, and fluidized bed systems3. Many of these systems present unique problems for cell cultivation and scale –up, such as high cost, nutrient concentration gradients, hydrodynamic shear, cell aggregation, and difficulty in sampling, monitoring, and controlling cell scale-up.

Various adherent cell lines are used in the production of viruses, either in the production of viral vaccines or for the production of viral vectors for gene therapy applications. In this video, using the single use pneumatic (Air-Wheel) bioreactor system, we demonstrate the culture of human lung carcinoma cells (A549) cells on micro-carriers for production of an oncolytic adenovirus. The pneumatic bioreactor design uses a vertical agitation wheel that is powered by the buoyancy of gas sparged into the bottom of the bioreactor. This gentle stirring method limits hydrodynamic shear forces, but still ensures optimal medium and cell mixing4. As compared to the stirred tank reactor, the pneumatic reactor has low wall shear stress even with high volume Air-Wheel bioreactor systems (Figure 1). In contrast to stirred tank bioreactors, the vertical impeller of this single use reactor is turned by a stream of gas bubbles within the vessel, which allows for gentle and uniform medium mixing (Figure 2).

5. Equilibration and One-point DO Calibration

In Figure 3, the parameters for initiation of the bioreactor run are shown. This figure shows the screen prior to setting the parameters of temperature, dissolved oxygen, pH and agitation. Once the parameters are set, the run parameters are continuously monitored and adjustments can be made to maintain the required conditions. The software produces a continuous readout that allows for easy identification of problems. In this experiment using 2.5 L of DMEM containing 10% FBS, 250 ppm of SAFC Anti-foam C, 2 mm L-glutamine and 3 g/L of micro-carriers, the system is stabilized so the percent oxygen is 50%, the temperature is 37 °C, and the pH is 7.2. The reactor is inoculated with A549 cells at a concentration of 7 x 104 cells/ml (or 10 cells/micro-carrier). The parameters chosen for this run resulted in the majority of the cells adhering to the micro-carriers within 2 hr (Figure 4). After 12 hr, the cells are demonstrating signs of flattening and spreading on the micro-carrier surface (Figure 5). By 24 hr, micro-carriers have a relatively even distribution of cells, with no micro-carriers without cells and no large clumps of cells on the micro-carriers (Figure 6). The percentage of micro-carrier colonization by A549 cells is 75% by 24 hr and 90% thereafter (Figure 7). The cells continued to grow exponentially to ~1 million cells/ml after 48 hr (Figure 8). After infection by a dose of oncolytic adenovirus (2 x 108 virions/ml) at 50 hr, the density increased to 1.2 million cells/ml and then began to decrease as the lytic infection progressed. There was ~10,000 fold amplification of the viral inoculum.

In previous experiments, we have found that monitoring and adjusting gas flow is critical to maximizing cell growth (unpublished data). Rapidly growing cells can deplete the system of oxygen with the DO level dropping to zero. While the cells continued to grow, it was at a much slower rate. It is critical to monitor and adjust the oxygen flow to meet the cell demands during the logarithmic growth phase. Each run can be analyzed for optimal growth by comparing the pH, DO, and temperature with daily cell counts. 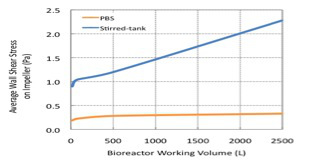 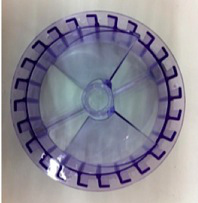 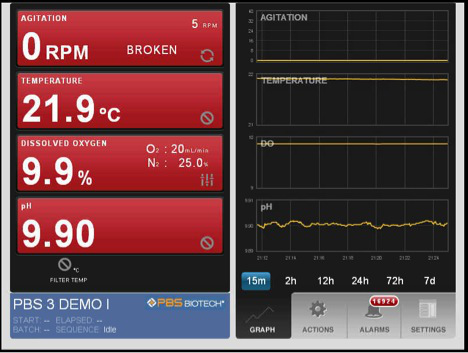 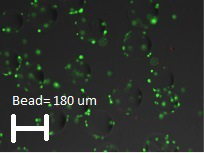 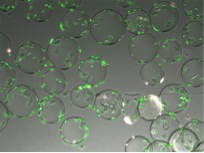 Figure 5. 12 hr after the initiation of the culture, the A549 cells are attaching, flattening, and spreading onto the micro-carriers. Please click here to view a larger version of this figure. 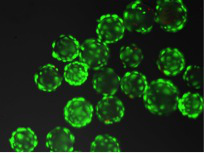 Figure 6. Micro-carriers coated with cells after 24 hr in culture. Please click here to view a larger version of this figure. 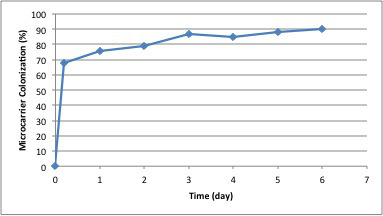 Figure 7. Percentage of micro-carrier colonization by A549 cells post inoculation.

Figure 8. The number of viable A549 cells in culture pre and post infection with adenovirus. Note that the viral infection step occurred at 50 hr.

This single-use bioreactor system is relatively simple to use and provides real-time analytics for reactor monitoring and analysis. It is extremely well suited for mammalian and insect cell culture with cell densities reaching over 30 million cells/ml. Besides A549 cells described in this report11, we have grown SF-9 insect cells in the bioreactor as well. The gentle mixing provided by the pneumatic air wheel reduces cell damage. Several steps are critical when setting up this reactor. First, proper calibration of the pH and DO sensors is important for optimal monitoring of the culture and for addition of reagents to adjust the pH or the oxygen in the system. Second, the reagent and seed bottles must be filled and the luer attachments made in a sterile environment such as a BSC. Once the reagent bottles are moved out of the sterile environment, the connections to the bioreactor feed lines must be made with care to avoid microbial contamination.

While this bioreactor system works well for mammalian and insect cell lines it is not designed for bacterial cultures. The system cannot provide the rapid mixing and oxygenation that is required for bacterial cells. Bacterial growth is best accomplished in a stirred tank bioreactor. As compared to other single use bioreactors for mammalian or insect cell culture, this system is easy to use, provides sufficient data for analysis of runs, and has similar or better cell growth than the other single use system we have evaluated.

The single use pneumatic bioreactor system has the potential to meet many of the research and clinical applications in the fields of biotherapeutics, vaccines, stem cells, and personalized medicine4. In addition, the flexibility of this system allows for Batch, Fed-batch, Perfusion, and Transfection based bioreactor applications5. Finally, single-use disposable bioreactor systems have the potential to meet the needs of large scale industrial production and to adhere to guidelines and recommendations of national and international regulatory agencies6-10.

Authors D. Giroux and Y. Hashimura are employees of PBS Biotech that produces reagents and instruments used in this article.

This project was support in part by Johns Hopkins University, Office of the Provost through the Gateway Science Initiative. 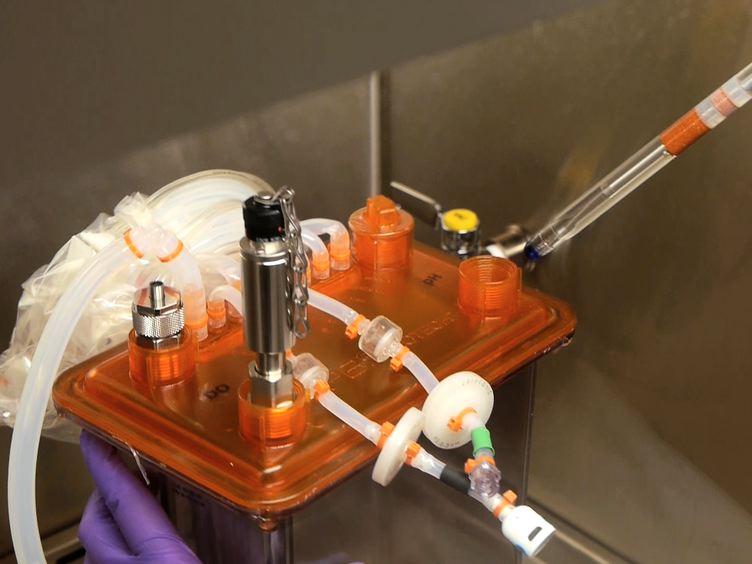