Cardiac progenitor cells (CPCs) have the capacity to differentiate into cardiomyocytes, smooth muscle cells (SMC), and endothelial cells and hold great promise in cell therapy against heart disease. Among various methods to isolate CPCs, differentiation of embryonic stem cell (ESC) into CPCs attracts great attention in the field since ESCs can provide unlimited cell source. As a result, numerous strategies have been developed to derive CPCs from ESCs. In this protocol, differentiation and purification of embryonic CPCs from both mouse and human ESCs is described. Due to the difficulty of using cell surface markers to isolate embryonic CPCs, ESCs are engineered with fluorescent reporters activated by CPC-specific cre recombinase expression. Thus, CPCs can be enriched by fluorescence-activated cell sorting (FACS). This protocol illustrates procedures to form embryoid bodies (EBs) from ESCs for CPC specification and enrichment. The isolated CPCs can be subsequently cultured for cardiac lineage differentiation and other biological assays. This protocol is optimized for robust and efficient derivation of CPCs from both mouse and human ESCs.

Heart disease remains the leading cause in the world today and the death rates have remained virtually unchanged in the past two decades (American Heart Association). There is a critical need for developing novel therapeutic strategies to effectively prevent or reverse heart failure. One promising strategy is cell-based therapy following the rapid development of stem cell biology1. In this regard, multipotent CPCs could be an excellent cell source for the therapy due to their ability to proliferate but committed only to cardiac lineage differentiation. Therefore, efficient and robust method to generate and isolate CPCs is of great importance for heart cell therapy studies.

This protocol focuses on embryonic CPCs identified during early embryogenesis and how their generation from ESCs. Various CPCs have been isolated from embryonic and adult hearts, even from bone marrows2. During embryo development, bone morphogenetic proteins (BMPs), wingless-type MMTV integration site family members (Wnts) and Nodal signals induce the commitment of the Mesp1+ multipotent mesoderm3. Mesp1+ cells then differentiate into the embryonic CPCs4. These CPCs are typically marked by HCN4, NK2 homeobox 5 (Nkx2-5), Isl LIM homeobox 1 (Isl1), T-box 5 (Tbx5), and myocyte enhancer factor 2C (Mef2c), form primary and second heart fields, and contribute to the major parts of heart during cardiogenesis5-10. Both Nkx2-5+ and Isl1+/Mef2c+ CPCs are able to differentiate into cardiomyocytes, smooth muscle cells (SMCs), and endothelial cells5-8. Thus these CPCs will give rise to cardiac vasculature as well as cardiac tissues and are an ideal cell source for cell-based heart therapy. Consequently, generating CPCs in vitro has been a major research focus in cardiovascular studies. Since ESCs have unlimited expansion capacity and represent the ICM cells at the blastocyst stage, differentiation of ESCs into embryonic CPCs following the natural embryogenesis is considered a logical and effective approach to obtain CPCs.

One widely applied approach to obtain CPCs from ESCs is to aggregate ESCs into EBs11. To improve the differentiation efficiency, defined chemical and growth factors based on the knowledge of cardiac development have been used12-14. However, there are no definitive CPC markers, particularly no cell-surface markers, which are widely accepted in the field. To address this issue, ESCs are engineered to mark Isl1+ or Mef2c+ CPCs and their derivatives with fluorescent reporters using Cre/loxP system. The cre recombinase is knocked in under the control of Isl1/Mef2c promoter/enhancer. Modified fluorescent protein RFP or YFP gene driven by a constitutive promoter can be activated by excision of flox stop codon with cre recombinase (ISL1:cre;pCAG-flox-STOP-flox-GFP or RFP/Isl1-cre;Rosa26YFP/Mef2c-cre;Rosa26YFP)5,6. Once the ESCs are differentiated into second heart field CPCs, Isl1/Mef2c promoter/enhancer driven cre will activate the fluorescent reporters and CPCs can be enriched by FACS-purification. Briefly, EB aggregation method is used to initiate ESC differentiation. To enhance differentiation efficiency, the differentiated cells are treated with ascorbic acid (AA) and growth factors such as Bmp4, Activin A and Vegf13,15. This protocol allows robust and efficient CPC differentiation using both mouse and human ESCs. 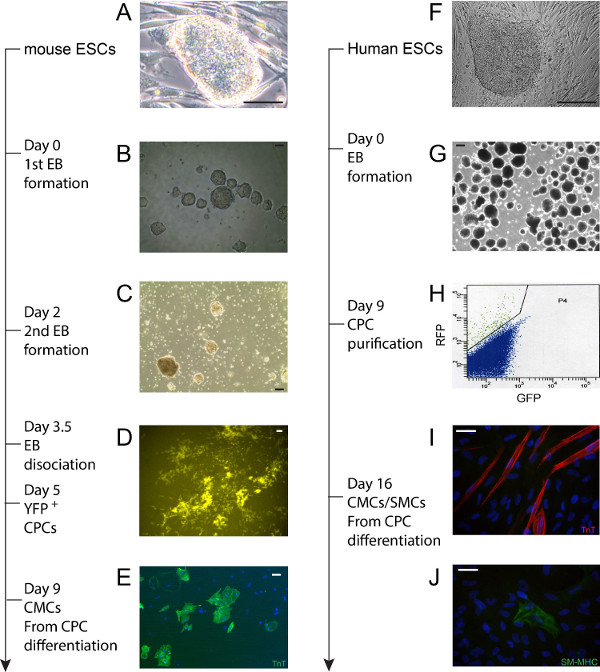 This protocol combines a method using growth factors to guide mESCs differentiation and spontaneous differentiation of human ESCs into CPCs. CPC lineage marked with fluorescent reporter is used to efficiently identify and isolate CPCs by FACS. The FACS-purified CPCs retain the capacity to differentiate into cardiomyocytes, smooth muscle, and endothelial cells and have a comparable expression profile to the in vivo cells. Thus, these CPCs can serve as a great resource for cell based heart therapy because of their ability to form both cardiac muscle and vessel structures.

One critical step in this protocol is to identify the correct timing associated with high purity and quantity of CPCs during in vitro differentiation. There are many conditions (e.g., serum lot number, cell line, etc.) that might affect differentiation of pluripotent stem cells into CPCs. Pilot experiments for optimization of differentiation and determination of the right time window for isolation of CPCs are strongly recommended.

The purification of CPCs in this protocol depends on the fluorescent reporter which is activated by tissue specific cre recombinase. The reporter specificity relies on the fidelity of the promoter of cardiovascular progenitor markers and cre recombinase. The recent development of genome editing tools such as CRISPR/Cas9 system allows efficient generation of a fluorescent reporter in ESCs16-21. Therefore, these technologies may be used to engineer more stringent and better CPC-reporter cell lines in future. Subsequently, the use of FACS-purification of CPCs may be widely applied to these superior lines.

It is worth noting, that the efficacy of ESCs EB/monolayer based differentiation and the effects of growth factors vary considerably among different lines. Therefore, selection of optimal ESC lines for CPC differentiation should be considered carefully.

We thank Dr. Leonid Gnatovskiy for his carefully and critical reading of the paper. This work was supported in part by grants from the National Institutes of Health (HL109054) and the Samuel and Jean Frankel Cardiovascular Center, University of Michigan (Inaugural Fund) to WZ and from the Leon H Charney Division of Cardiology, New York University School of Medicine to BL.

A correction to the author list was made to: Derivation of Cardiac Progenitor Cells from Embryonic Stem Cells.

The following author is now listed as a co-corresponding author: 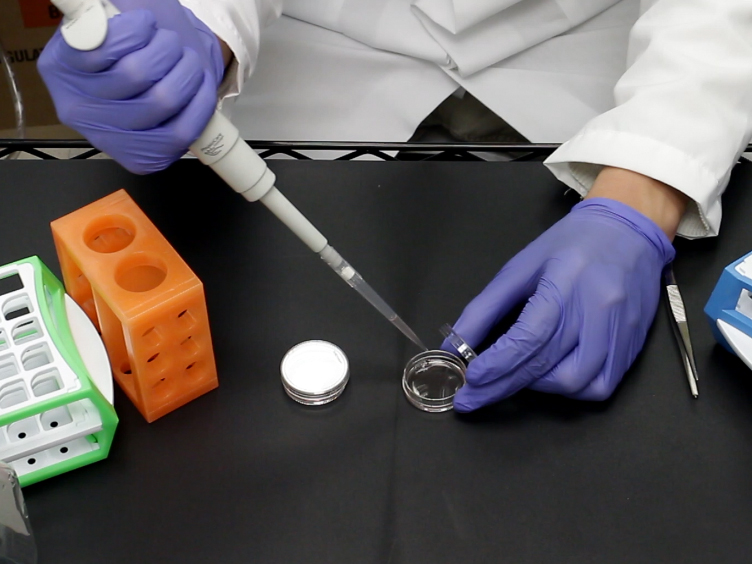