This protocol specifically focuses on tools for assessing phrenic motor neuron (PhMN) innervation of the diaphragm at both the electrophysiological and morphological levels. Compound muscle action potential (CMAP) recording following phrenic nerve stimulation can be used to quantitatively assess functional diaphragm innervation by PhMNs of the cervical spinal cord in vivo in anesthetized rats and mice. Because CMAPs represent simultaneous recording of all myofibers of the whole hemi-diaphragm, it is useful to also examine the phenotypes of individual motor axons and myofibers at the diaphragm NMJ in order to track disease- and therapy-relevant morphological changes such as partial and complete denervation, regenerative sprouting and reinnervation. This can be accomplished via whole-mount immunohistochemistry (IHC) of the diaphragm, followed by detailed morphological assessment of individual NMJs throughout the muscle. Combining CMAPs and NMJ analysis provides a powerful approach for quantitatively studying diaphragmatic innervation in rodent models of CNS and PNS disease.

Amyotrophic Lateral Sclerosis (ALS) is a debilitating motor neuron disease associated with the loss of both upper and lower motor neurons and consequent muscle paralysis. Upon diagnosis, patient survival is on average only 2-5 years1. Phrenic motor neuron (PhMN) loss is a critical component of the pathogenesis of ALS. Patients ultimately die due to loss of PhMN innervation of the diaphragm, the primary muscle of inspiration2,3. Traumatic spinal cord injury (SCI) is also a serious problem with associated breathing difficulties. Approximately 12,000 new cases of SCI occur each year4 due to traumatic damage to the spinal cord. Despite disease heterogeneity with respect to location, type and severity, the majority of SCI cases involve trauma to the cervical spinal cord, which often results in debilitating and persistent respiratory compromise. In addition to ALS and SCI, other central nervous system (CNS) diseases can be associated with diaphragmatic respiratory dysfunction5,6.

The phrenic nerve is an efferent motor nerve that innervates the ipsilateral hemi-diaphragm and that originates from PhMN cell bodies located in the C3-C5 levels of the ipsilateral cervical spinal cord. PhMN output is controlled by descending bulbospinal input from the brainstem in an area known as the rostral ventral respiratory group (rVRG)7. The rVRG-PhMN-diaphragm circuit is central to the control of inspiratory breathing, as well as other non-ventilatory diaphragm behaviors. Various traumatic injuries and neurodegenerative disorders that affect this circuitry can lead to a profound decline in respiratory function and patient quality of life. Descending input to PhMNs from the rVRG, PhMN survival, phrenic nerve integrity and proper innervation at the diaphragm neuromuscular junction (NMJ) are all necessary for normal diaphragm function. It is therefore important to employ techniques that can quantitatively evaluate this circuit in vivo in rodent models of ALS, SCI and other CNS diseases.

With this protocol, the goal is to describe experimental tools for assessing PhMN innervation of the diaphragm at both the electrophysiological and morphological levels. Compound muscle action potentials (CMAPs) are recorded by stimulating all efferent motor neuron axons of a given motor nerve and then analyzing the elicited depolarization response of the target myofibers. This technique can be used in vivo in anesthetized rats and mice to quantify functional innervation of the hemi-diaphragm by PhMNs8. Due to the fact that CMAPs represent simultaneous recording of all (or at least many/most) myofibers of the whole hemi-diaphragm, it is useful to also examine the phenotypes of individual motor axons and myofibers at the diaphragm NMJ in order to track disease- and therapy-relevant morphological changes such as partial and complete denervation, regenerative sprouting and reinnervation. This can be accomplished via whole-mount immunohistochemistry (IHC) of the diaphragm, followed by detailed morphological assessment of individual NMJs throughout the muscle9. Combining CMAPs and NMJ analysis provides a powerful approach for quantitatively studying diaphragmatic innervation in rodent models of CNS and PNS disease.

Experimental procedures were approved by the Thomas Jefferson University institutional animal care and use committee and conducted in compliance with the European Communities Council Directive (2010/63/EU, 86/609/EEC and 87-848/EEC), the NIH Guide for the care and use of laboratory animals, and the Society for Neuroscience’s Policies on the Use of Animals in Neuroscience Research. 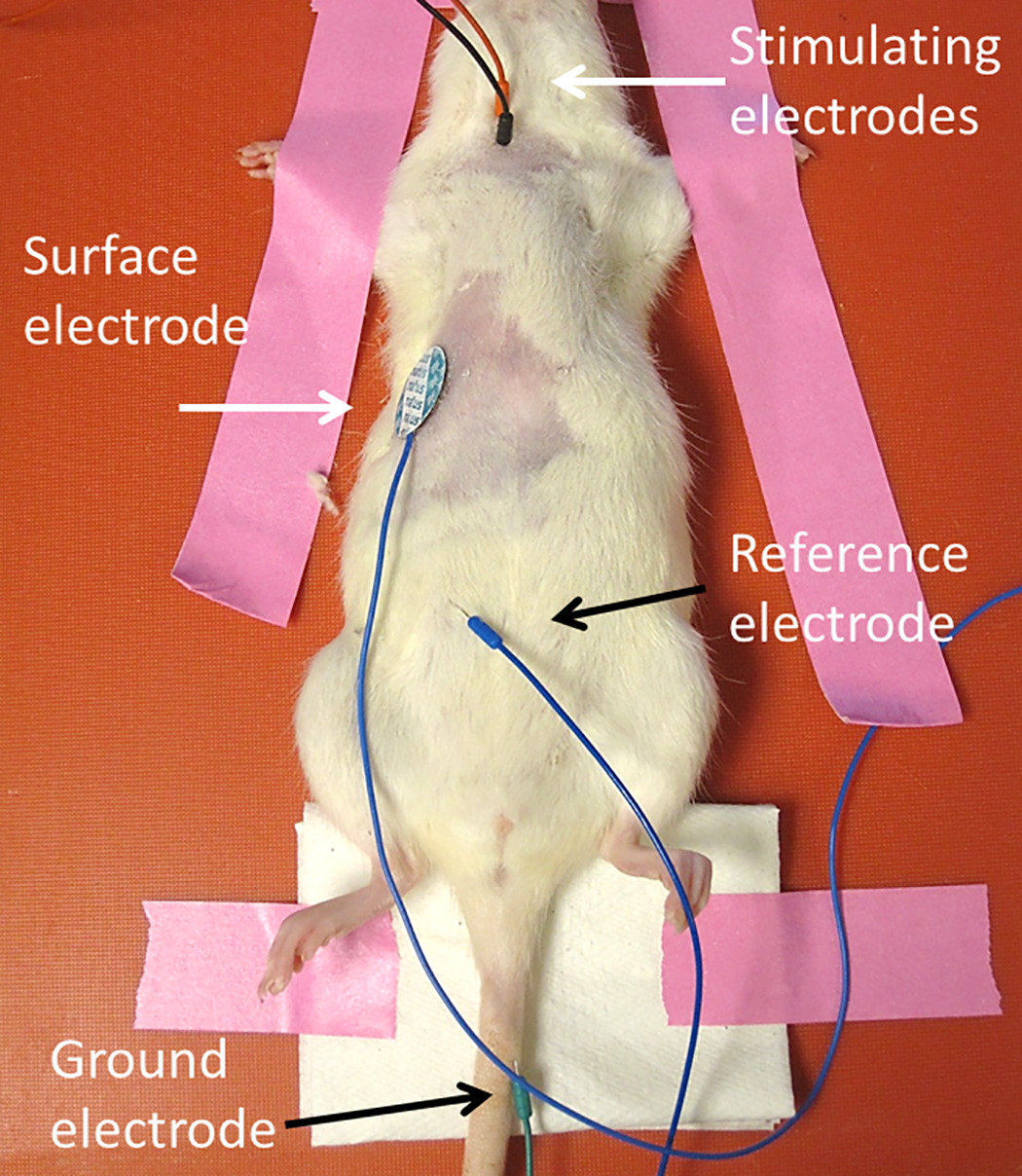 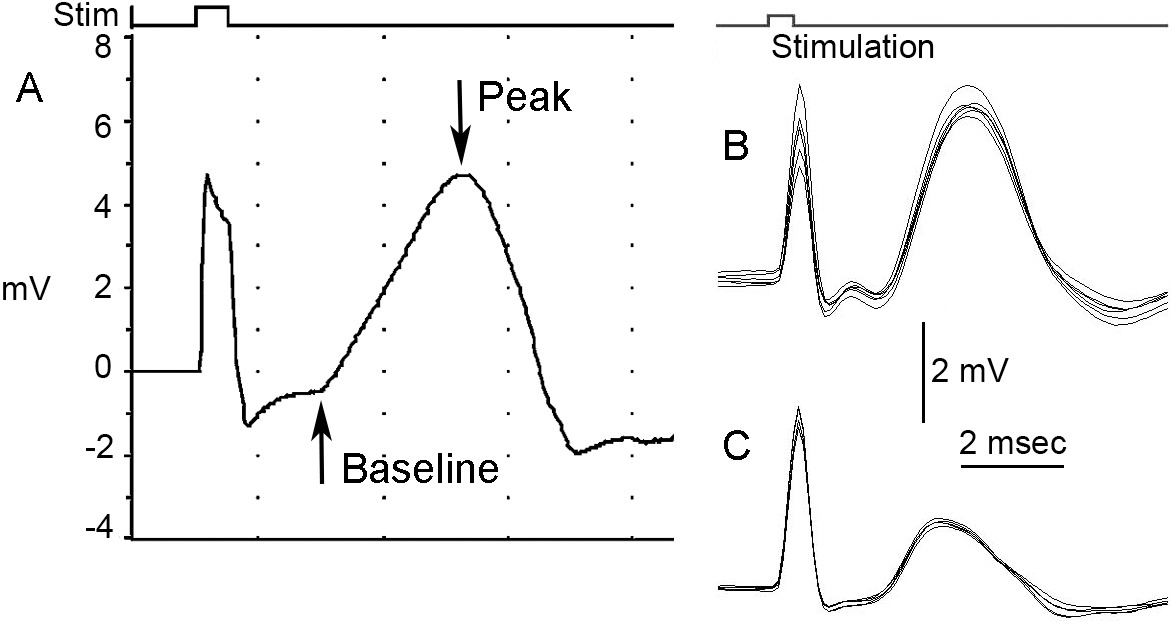 Figure 2: CMAP recordings and analysis. (A) The amplitude of CMAP response can be measured from baseline to peak. A typical CMAP response should show both the stimulus artifact and response curve. (B-C) Representative average CMAP responses. Stimulation should be carried out at least ten consecutive times to obtain a repeated average of the response. Shown here are a laminectomy-only uninjured rat (B) and a comparison of CMAP responses for an injured rat that received a unilateral C4 hemi-contusion (C). Please click here to view a larger version of this figure. 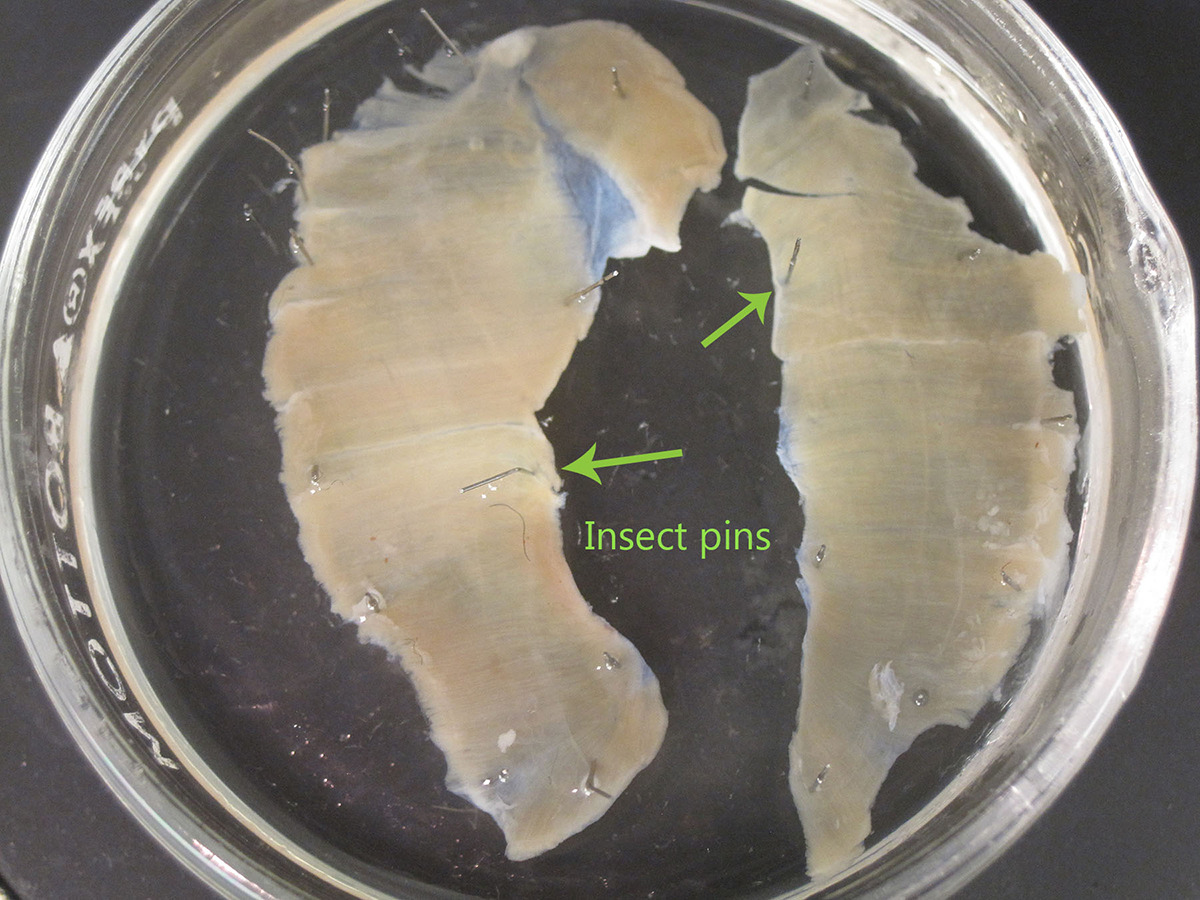 Figure 3: Preparation of diaphragm for whole-mount staining. Insect pins should be placed into surrounding tissue to secure the hemi-diaphragm to Sylgard. Avoid placing pins into the muscle itself. In this image, both hemi-diaphragm muscles are shown and pinned down separately. Please click here to view a larger version of this figure. 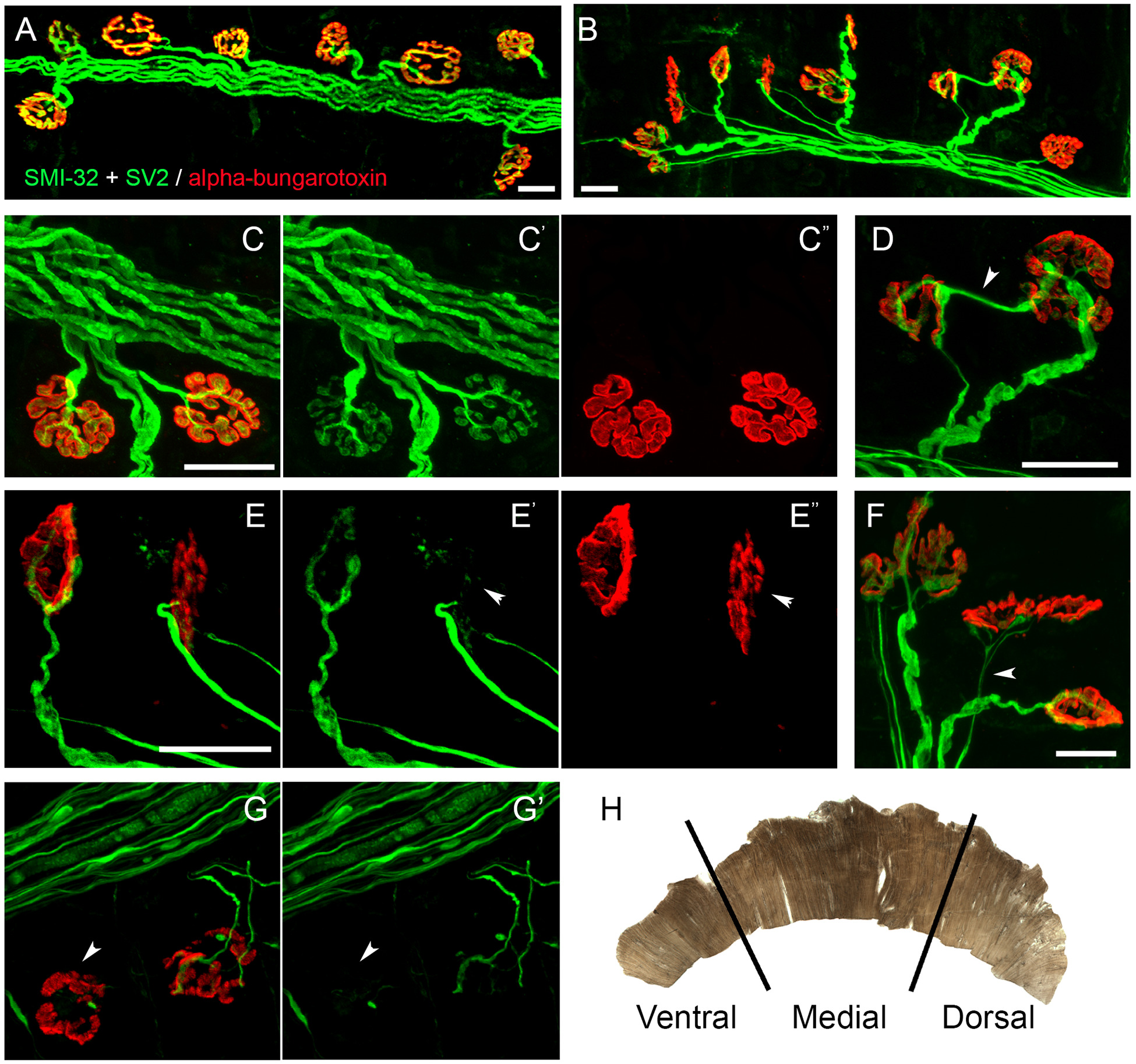 As respiratory function is compromised in both traumatic SCI and ALS, developing therapies that target breathing and specifically diaphragm innervation are clinically relevant5,6. In order to comprehensively study respiratory function, a combined approach method should be used. CMAPs measure the degree of functional innervation of the diaphragm by way of external phrenic nerve stimulation, but not endogenous bulbospinal respiratory drive8. In addition, these recordings do not allow for examination of morphological changes at the NMJ, particularly at the level of individual motor axons and post-synaptic acetylcholine receptors. By using the described staining protocol, one can quantitatively assess relevant morphological phenotypes such as complete denervation, partial denervation and even regenerative sprouting and reinnervation at individual NMJs of the diaphragm muscle9.

Nevertheless, these two protocols still do not fully capture all aspects of respiratory pathology. For example, if injury occurs to the descending bulbospinal axons without any damage to the PhMN pool or phrenic nerve, CMAP amplitudes may still appear normal even though there is significant impairment in this circuitry because the phrenic nerve is externally stimulated14. Importantly, CMAPs do not allow for measurement of endogenous supraspinal respiratory drive. Furthermore, CMAPs do not provide a measure of overall ventilation. It may be beneficial to conduct, for example, whole body plethysmography to examine overall breathing behavior and spontaneous intra-muscular EMG recordings and phrenic nerve recordings to test endogenous PhMN activation. In addition, other approaches such as measuring blood gas levels can provide important information about respiratory function15. It may also be possible to employ the described diaphragm CMAP recording technique for motor unit number estimation16, though we have never attempted this. It is also important to note that these two protocols were described for only one respiratory muscle, the diaphragm. However, there are other inspiratory and expiratory respiratory muscles such as the intercostals that can be studied and that are affected by diseases such as SCI and ALS.

In this protocol, we describe diaphragm CMAP and NMJ analysis specifically in the rat model. Similarities between rats and mice make transfer of both these techniques to mice straightforward. We previously showed that partial loss of PhMNs following cervical contusion SCI does result in quantifiable decreases in diaphragm CMAP amplitude that correlate with morphological NMJ denervation. Furthermore, we have demonstrated these deficits in both mouse17 and rat10-12 SCI models. In addition, we have shown quantifiable diaphragm CMAP reduction in both mouse18 and rat13,19 models of ALS (i.e., the SOD1G93A model) that are associated with more subtle diaphragm denervation by PhMNs compared to cervical SCI, and we have demonstrated that we can detect relatively smaller therapeutic effects on CMAP amplitude of interventions such as stem cell transplantation in these ALS models19. Collectively, these findings demonstrate the utility of using these analyses to quantitatively assess both functional and morphological assessment of diaphragm innervation by PhMNs in both rat and mouse models of SCI and ALS.

By combining the histological and functional techniques detailed in this protocol to examine breathing and innervation at the NMJ, better insight can be gained into nervous system diseases associated with diaphragm dysfunction, thus providing greater awareness of how to target therapies in animal models and ultimately in patients. 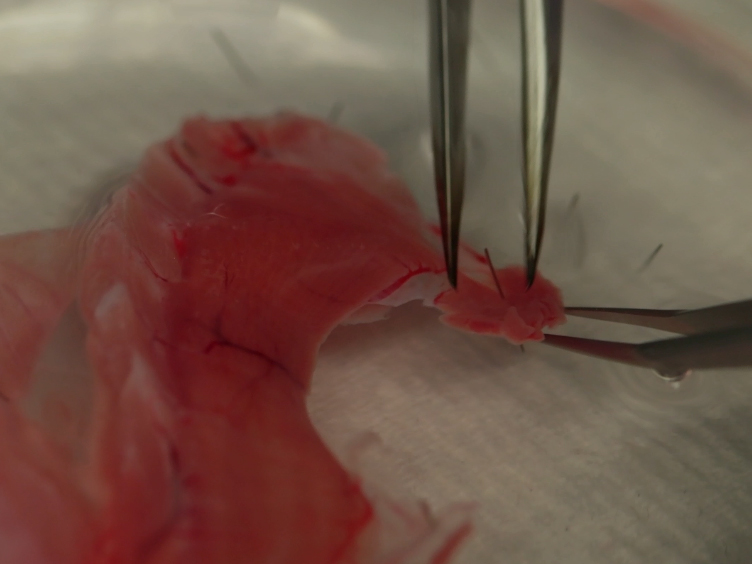