Head fixation is a technique of immobilizing animal's head by attaching a head-post on the skull for rigid clamping. Traditional head fixation requires surgical attachment of metallic frames on the skull. The attached frames are then clamped to a stationary platform resulting in immobilization of the head. However, metallic frames for head fixation have been technically difficult to design and implement in general laboratory environment. In this study, we provide a novel head fixation method. Using a custom-made head fixation bar, head mounter is constructed during implantation surgery. After the application of acrylic resin for affixing implants such as electrodes and cannula on the skull, additional resins applied on top of that to build a mold matching to the port of the fixation bar. The molded head mounter serves as a guide rails, investigators conveniently fixate the animal’s head by inserting the head mounter into the port of the fixation bar. This method could be easily applicable if implantation surgery using dental acrylics is necessary and might be useful for laboratories that cannot easily fabricate CNC machined metal head-posts.

Head fixation or head restraining is a technique of immobilizing the animal's head by attaching a frame or plate on the skull for rigid clamping. The technique has been adopted for precise sensory stimulation, behavioral sensing with or without neural recording in awake animals1-3 and for juxtacellular labeling during sleep-wake cycle4. It is also used for in vivo brain imaging5,6. Now head fixation technique is a commonly used tool in neuroscience and behavioral research.

Basically, traditional head fixation requires surgical attachment of metal head-posts on top of the skull6-8. The attachments are then clamped to a stationary platform, resulting in immobilization of the head. Neurophysiological research in awake animals such as neural and/or optical recording, brain circuitry intervention, brain imaging is accompanied by implantation surgery using dental acrylics. Therefore, it seems a simple task to implement the head fixation in those laboratories when it is experimentally necessary. The frames should be designed to be light-weight and small enough not to disturb animal’s natural behavior in their home cages. It also provides mechanical rigidity when clamped to the stationary platform. It further has biocompatibility depending on experimental purposes. Therefore, it is technically difficult to design and fabricate such head-posts in general laboratory equipment.

In this study, a novel head fixation method is described, providing mechanical rigidity through convenient clamping without using metal head-posts. By using the method, head fixation could be done under general laboratory conditions, where implantation surgery is usually performed in rodents for brain study. The metal head-posts are replaced with acrylic resin cement molded partially by a custom-made head fixation bar and the molding process is done during implantation surgery. The fixation bar provides high spatial compatibility with other implants, such as neural recording probes, stimulation electrodes. Also it simplifies steps of clamping the animal’s head on the fixation platform by removing screw-fastening. We used this method in the previous behavioral study and we concluded that this method is easy to implement and convenient in practical experimentation9.

Ethics Statement:
This experiment was approved by the Kyungpook National University Institutional Animal Care and Use Committee, and was performed according to Guide for the Care and Use of Laboratory Animals (National Institute of Health, 1996). After experiment, animals were sacrificed under carbon dioxide euthanasia.

1. Design of the Head-fixation Bar for Rats

NOTE: This step is a general guideline for a fixation bar design. Any modification about the dimension and material is possible depending on animals or implants. Designing a head-fixation bar using CAD software is recommended but not necessary.

CAUTION: Be cautious when dealing with dental acrylic resin. Liquid may cause skin irritation. Put on a mask and wear gloves. Work in a well-ventilated area.

Note: This step describes habituation schedules based on authors’ empirically successful assessments. For an overview of habituation procedure for head-fixation, see Schwartz’s10 or Guo’s11 work.

This head fixation method is applicable to both rats and mice. Total eight rats received bilateral implantation of stimulating electrodes into the medial forebrain bundle. For four out of them, customized tungsten wire electrodes (microdrives) were additionally implanted into the M1 forelimb area (Figure 2C). For mice (n = 2), four stainless steel wire electrodes were implanted into frontal/occipital cortical areas. During surgery, head mounters were molded for head fixation in both rats and mice, as describe in Protocol section 2. After recovery from surgery, they were exposed to daily sessions of head fixation for either habituation or behavioral task. The molded head mounters stayed through the end of experiment (40.5 ± 1.73 (mean ± s.d.) days for rats and 81 ± 5.66 (mean ± s.d.) days for mice after surgery). Rats were exposed daily 40 to 60 min head fixation during behavior task; mice were exposed daily 20 to 40 min of behavior task.

Previously we used this technique to train rats push and pull a lever under head fixation. The reward was direct electrical stimulation of the medial forebrain bundle. Though it elicits exaggerated locomotor behavior, head fixation was firmly maintained without accidental mounter separation.

After habituation, docking the head mounter into the port of the fixation bar was completed in a few second by locking rubber band to the hook. When first introduced to the head fixation, animals presents struggling behaviors such as running in place, straighten out their legs (Figure 3A and B). However, such behaviors diminished with habituation. Successful habituation can be confirmed that animals show no more struggling behavior while head fixed (Figure 3C and D). 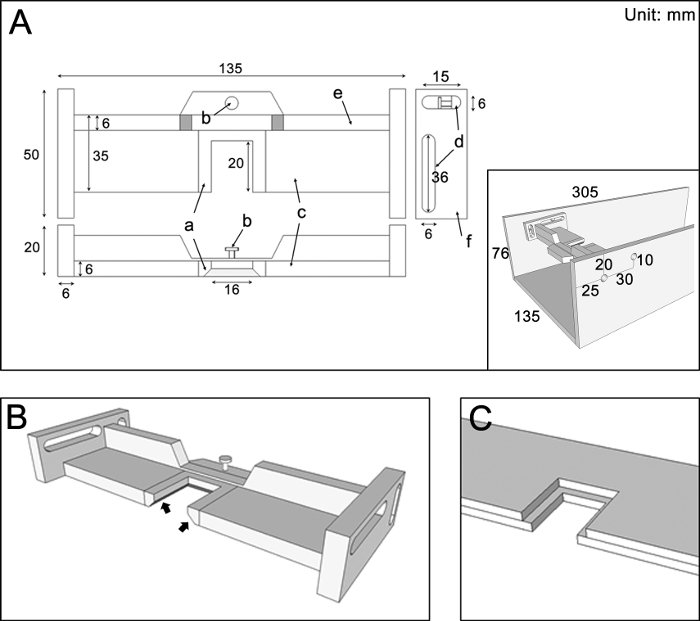 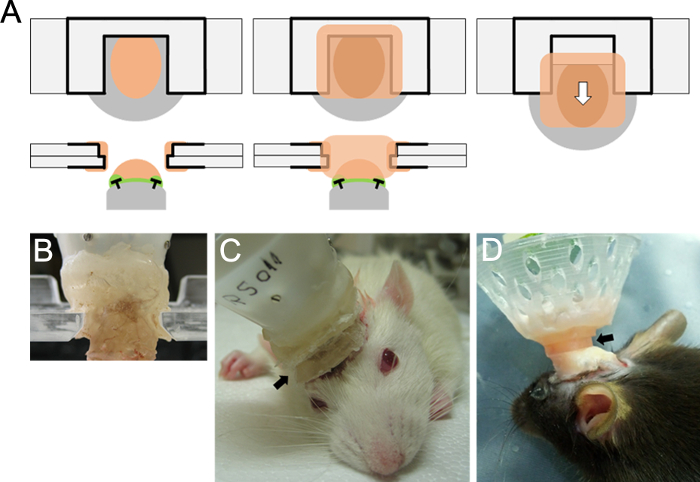 Figure 2. Construction of mounter molding during surgery.
(A) Critical steps molding the head mounter. (Left) Screws (T shapes in black) should be implanted perpendicular to the skull (gray) surface. A thin layer of dental adhesive resin cement (green) covers screws and the skull surface. (Center) After implantation depending on experimental purposes, additional acrylic resins (orange) are filled in the gap between initial resin coated on the port and base resins of the skull surface and becomes a part of the head mounter. (Right) After added acrylic resins are hard set, the head mounter can be released by sliding out of the port. Solid black lines indicate paraffin films. (Modified from Figure 1 of Roh et al.9) (B) Constructed head mounter in rats is ready for releasing (after the step of A-Center). (C-D) Molded acrylic resins serving as a head mounter. After surgery, still under anesthesia, animals are released from the fixation bar. Black arrows indicate guide rails matching to the shape of the port. Please click here to view a larger version of this figure. 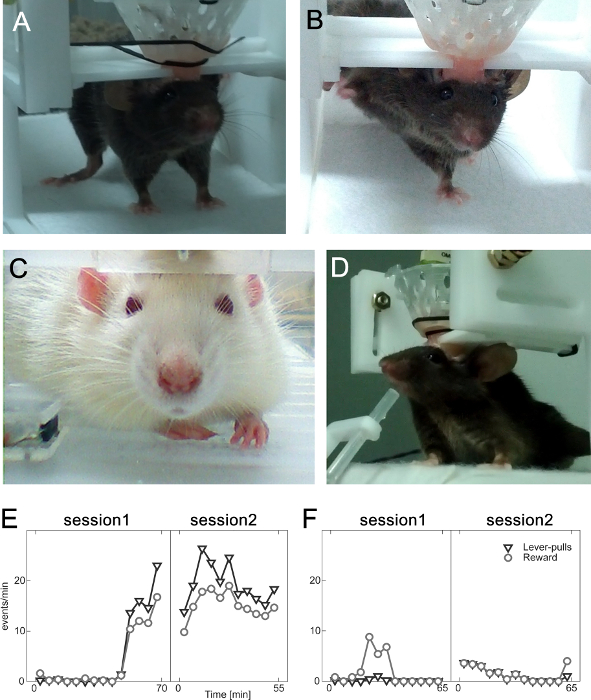 This protocol demonstrates a simple and convenient head fixation method using materials at hand. For physically successful head fixation, the first critical steps during surgery is to rinse and dry the skull surface clearly before applying the dental adhesive resin cement. Second, this method does not uses screws implanting under temporal muscles and only depends on the screws on the skull, their perpendicular implantation against the surface of skull rim is crucial10. This reduces the possibility of accidental resin mounter separation from the skull, especially in rats.

The acrylic resin to build the head mounter is adhesive to the bar. We prevented this by covering the paraffin film over the port. However, this is an inconvenient procedure. One possible solution to improve this is to design the fixation bar with a metallic material. Furthermore, this should serve more stability in clamping than the acrylic bar by removing the gap occupied by the paraffin film. The described method might be inappropriate for brain imaging study because of small gap originated from paraffin film. This could also be resolved by metallic fixation bar or other method proposed elsewhere12.

One of benefits of this method is flexibility (or compatibility). Since the area of the port covers vertical access routes into nearly most of the brain areas. This indicates that experiment-specific head frame design is not required. Once the fixation bar is designed, it can be used without any modification. Also, this method is immediately applicable in general laboratory condition. The head fixation without metal head-posts is achieved by molding the acrylic resin which is available in general laboratory performing implantation surgery. Fixation procedure is convenient to investigators without using screws and plates assembly2,7,8. 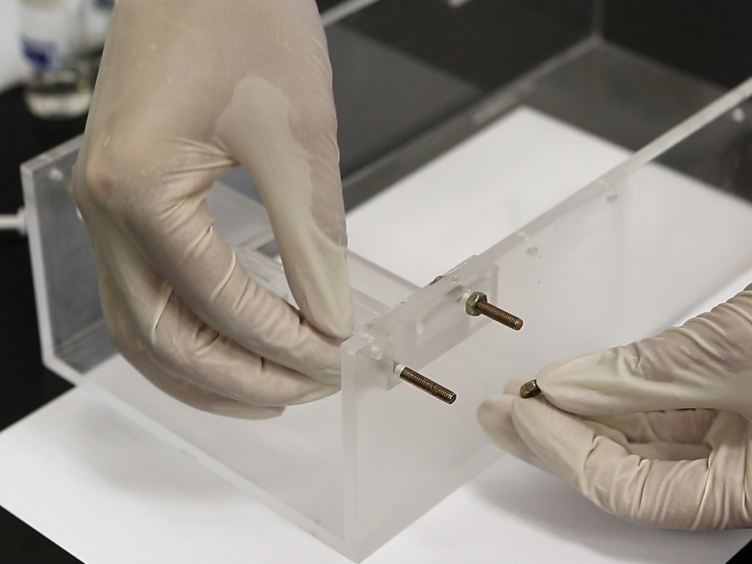