We describe a protocol for the light-catalyzed generation of hydrogen peroxide — a cofactor for oxidative transformations.

Oxidoreductases belong to the most-applied industrial enzymes. Nevertheless, they need external electrons whose supply is often costly and challenging. Recycling of the electron donors NADH or NADPH requires the use of additional enzymes and sacrificial substrates. Interestingly, several oxidoreductases accept hydrogen peroxide as electron donor. While being inexpensive, this reagent often reduces the stability of enzymes. A solution to this problem is the in situ generation of the cofactor. The continuous supply of the cofactor at low concentration drives the reaction without impairing enzyme stability. This paper demonstrates a method for the light-catalyzed in situ generation of hydrogen peroxide with the example of the heme-dependent fatty acid decarboxylase OleTJE. The fatty acid decarboxylase OleTJE was discovered due to its unique ability to produce long-chain 1-alkenes from fatty acids, a hitherto unknown enzymatic reaction. 1-alkenes are widely used additives for plasticizers and lubricants. OleTJE has been shown to accept electrons from hydrogen peroxide for the oxidative decarboxylation. While addition of hydrogen peroxide damages the enzyme and results in low yields, in situ generation of the cofactor circumvents this problem. The photobiocatalytic system shows clear advantages regarding enzyme activity and yield, resulting in a simple and efficient system for fatty acid decarboxylation.

The climate change and the foreseeable depletion of renewable resources poses a serious threat to our society. In this context, enzyme catalysis represents a still not fully exploited potential for the development of sustainable and 'greener' chemistry1. Oxidoreductases have the capacity to catalyze the introduction and modification of functional groups under mild reactions conditions and belong to the most important biocatalysts2. Most redox transformations require the supply of external of cofactors such as NAD(P)H. Methods for cofactor regeneration have been applied in industrial scale. However, they still result in high process costs, which limits their application mostly to high-value products. Interestingly, several peroxidases3,4 and P450 monooxygenases5 accept electrons from hydrogen peroxide via the so-called peroxide shunt. While H2O2 is a cheap co-reagent, it is reportedly harmful for many enzymes. A steady in situ formation of low concentrations of hydrogen peroxide is a viable approach to drive the reaction without impairing the operational stability of enzyme.

Figure 1. Experimental set-up of the photobiocatalytic decarboxylation of fatty acids by OleTJE. Please click here to view a larger version of this figure.

The use of light as energy source for chemical and biological processes has been receiving increasing attention in the last years6. Light-driven generation of hydrogen peroxide has emerged as an easy and robust method to supply hydrogen peroxide for redox transformations (Figure 1). A photocatalyst such as flavin adenine mononucleotide (FMN) allows the reduction of molecular oxygen to hydrogen peroxide, which then is used as cofactor for the enzymatic oxyfunctionalization reaction. Possible electron donors are ethylenediaminetetraacetic acid (EDTA), ascorbate or the inexpensive formiate. The method is generally applicable for H2O2-dependent enzymes, including peroxidases3,4 and P450 monooxygenases5.

We have recently investigated the application of a novel bacterial decarboxylase7 for the transformation of natural fats into olefins8. This would be a sustainable route for the synthesis of widely used platform chemicals from a bio-based source. The decarboxylase OleTJE from the gram-positive bacterium Jeotgalicoccus sp. catalyzes the oxidative decarboxylation of fatty acids and forms 1-alkenes as products. OleTJE is closely related to bacterial P450 monooxygenases and needs electrons from hydrogen peroxide for the reaction.

Unfortunately, addition of H2O2 to a solution of substrate and enzyme resulted in low conversions and a poor reproducibility of the results, presumably due to a harmful effect of hydrogen peroxide on the stability of OleTJE. Generation of a fusion protein with the NADPH-reductase RhFred made an NADPH-dependent decarboxylation possible.9 Nevertheless, the high price of NADPH and the current limited possibilities for a cost-efficient regeneration prompted us to investigate cheaper electron donors. Inspired by the similarity of OleTJE with P450 monooxygenases, we used the light-catalyzed generation of H2O2. We were pleased to obtain high conversions (up to >95%) using cell-free extracts or purified enzyme solutions.

With the example of fatty acid decarboxylation, we present a general protocol for light-driven enzymatic redox transformations using FMN as photocatalyst and hydrogen peroxide as cofactor. The presented methods include the production of the enzyme in recombinant cell of E. coli, purification of the enzyme, the application for the synthesis of 1-alkenes and the analysis of the reaction products.

Caution: Please consult all relevant material safety data sheets (MSDS) before use. Several of the chemicals used in these syntheses are acutely toxic and carcinogenic. All steps involving harmful organic solvents, particularly the extraction of the reaction products and the derivatization of fatty acids must be carried out under a fume hood using personal protective equipment (safety glasses, gloves, lab coat, full-length pants, closed-toe shoes). All operations involving genetically modified organisms in this work require installations that are approved for handling of genetically modified organisms of the safety level S1.

1. Expression of the Recombinant Decarboxylase OleTJE in E. coli

Figure 2. (A) Temperature profile for GC/MS measurements. (B) Fingerprint of the 1-heptadecene eluting after 11.4 min. (C) Characteristic secondary CnH2n-1 fragment ions of terminal olefins exemplary shown for 1-heptadecene. Please click here to view a larger version of this figure.

The light-driven generation of hydrogen peroxide can be applied for a range redox transformations, including peroxygenases3, chloroperoxidases10 and P450 monooxygenases5. It is an easy and practicable approach. In the long term, the use of visible light opens up the perspective to utilize sunlight for chemical transformations, which is a sustainable alternative for energy-rich reactions.

The method is applicable with purified enzyme or with cell-free extract. While the latter requires less cost and work, it should be noted that small molecules in the crude extract may interfere with the light catalyzed conversion. A practicable approach is to remove these small components with a micromembrane (i.e., by centrifugation in a Centrifugal filter unit or by dialysis). The concentration of the light-harvesting molecule FMN determines the concentration of the hydrogen peroxide. Depending on the affinity of the oxidoreductase, this concentration is decisive for the enzymatic activity. Another important factor is the concentration of the sacrificial electron donor EDTA. The most important parameter, however, is the operational stability and activity of the enzyme.

The olefinization of fatty acids is an elegant reaction for the conversion of bio-based fatty acids into olefins that belong to the major commodities for the chemical industry. The light-driven biocatalytic decarboxylation can be carried out at room temperature and at neutral pH, which offers clear advantages in terms of sustainability.

Our results show that in situ generation of hydrogen peroxide is a strategy to supply the cofactor without impairing enzyme stability, leading to a high conversion. Present methods for cofactor regeneration use agricultural products or petrol-based chemicals. Light-driven reactions are emerging as renewable alternative. Future research will be dedicated to methods for the substitution of the sacrificial reagent EDTA by cheaper molecules and to reduce the amount of the light-harvesting molecule FMN.

R.K. and F.H. are grateful for the EU-commision for financial support within the Marie-Sklodowska ITN Biocascades (Nr. 634200). 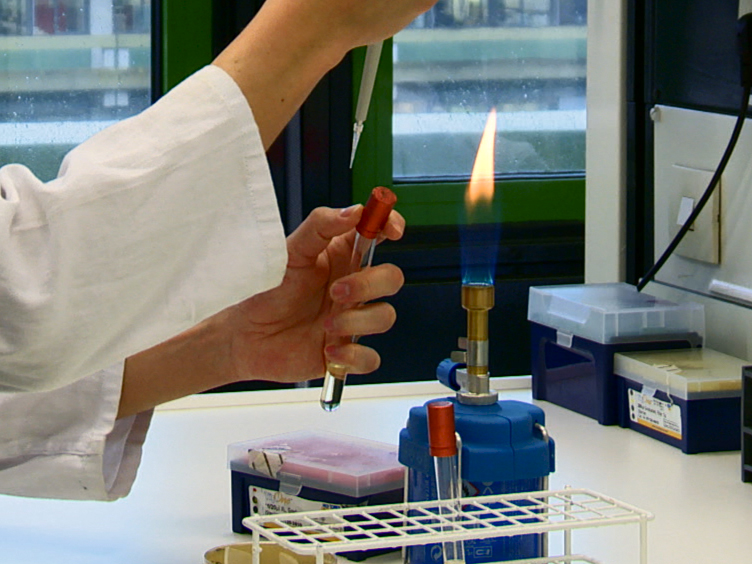