Eliminating specific cells without damaging other cells is extremely difficult, especially in established tissue, yet there is an urgent need for a cell elimination method in the tissue engineering field. Here, we present a method for specific cell elimination from a mixed 3D cell culture using near infrared photoimmunotherapy (NIR-PIT).

Recent developments in tissue engineering offer innovative solutions for many diseases. For example, tissue engineering using induced pluripotent stem cell (iPS) emerged as a new method in regenerative medicine. Although this tissue regeneration is promising, contamination with unwanted cells during tissue cultures is a major concern. Moreover, there is a safety concern regarding tumorigenicity after transplantation. Therefore, there is an urgent need for eliminating specific cells without damaging other cells that need to be protected, especially in established tissue. Here, we present a method for specific cell elimination from a mixed 3D cell culture in vitro with near infrared photoimmunotherapy (NIR-PIT) without damaging non-targeted cells. This technique enables the elimination of specific cells from mixed cell cultures or tissues.

Although this tissue regeneration is promising, contamination with unwanted cells is a major concern. Moreover, there is a safety concern of tumorigenicity after transplantation4,5. Although many studies have focused on these issues to eliminate specific cells, especially in regenerative medicine6-8, no practical method has been developed.

Near infrared photoimmunotherapy (NIR-PIT) is a treatment based on an antibody-photoabsorber conjugate (APC). An APC consists of a cell-specific monoclonal antibody (mAb) and a photoabsorber, IR700. IR700 is a hydrophilic silica-phthalocyanine derivative and does not induce phototoxicity by itself9. IR700 is covalently conjugated to the antibody via amide residues on the side chain of lysine molecules. The APC binds target molecules on the cell membrane and then induces nearly immediate cell necrosis after exposure to NIR light at 690 nm. During the exposure to NIR-light, the cellular membrane ruptures leading to cell death9-14. NIR-PIT has proven to be effective with multiple antibodies or antibody fragments, including anti-EGFR, anti-HER2, anti-PSMA, anti-CD25, anti-mesothelin, anti-GPC3, and anti-CEA15-21. Therefore, NIR-PIT can be used against a wide variety of target molecules. Moreover, NIR-PIT is a well-controlled treatment that allows selective treatment of specific regions by restricting the NIR-light irradiation18,22.

Note: The following protocol describes the necessary steps to eliminate specific cells using NIR-PIT. Controls and other details about NIR-PIT and cell viability can be found elsewhere18.

To optically monitor the effect of NIR-PIT, the A431 cell line, which overexpresses EGFR, was genetically modified to also express GFP and luciferase (A431-luc-GFP). As a non-target of NIR-PIT, the Balb/3T3 cell line was optically modified to express RFP (3T3-RFP). The APC, panitumumab-IR700 (pan-IR700), was synthesized. Mixed spheroids, which were composed of various ratios of cells (A431-luc-GFP and 3T3-RFP) were fabricated according to this protocol (Figure 1). Repeated NIR-PIT was performed with the incubation of pan-IR700 (see regimen in Figure 2A). Target cell elimination from this mixed 3D culture was achieved and monitored with fluorescence and luciferase activities (Figure 2B, C). On the other hand, non-target cells continued to grow. 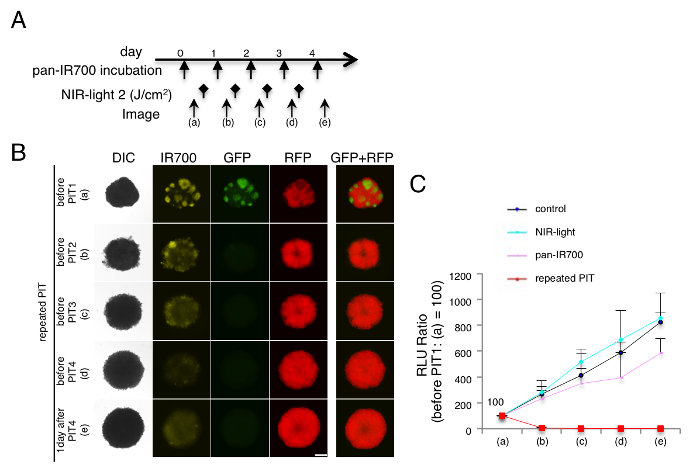 We demonstrate a method of specific cell elimination from a mixed 3D cell culture without damage to non-target cells by using NIR-PIT. So far, there is no practical method of cell elimination once the tissue is established or after transplantation. Thus, NIR-PIT is a promising method to accomplish this. This technique could also be utilized in vivo18,22, since APCs show similar pharmacokinetics as mAb itself. The target cell type can be adapted with various APC. Various antibodies or antibody fragments, including anti-EGFR, anti-PSMA, anti-mesothelin, and anti-CEA were already used as APCs15-21. Additionally, changing the region of NIR-irradiation can minimize the region treated. Here, with quantification of luciferase activity and fluorescence on target cells, complete elimination of specific cells was confirmed.

NIR-PIT is a light based therapy, thus a critical point is the distance between the NIR-light source and the target, since light energy and therefore cell necrosis decrease according to an inverse-square law (step 3.4). To make the 3D spheroid precisely, the plate should be treated and incubated as gently as possible. The drops containing cells easily are destroyed or fall off by a little shock before forming 3D shapes.

NIR-PIT has several unique advantages. First, NIR-PIT APCs demonstrate similar intravenous pharmacokinetics to parental non-conjugated antibodies, due to the hydrophilic characteristics of IR700, that lead to highly specific binding to target cells and minimal non-target accumulation. Thus, even after transplantation of the tissue, NIR-PIT can treat target cells via intravenous injection of the APC followed by exposure of the region of interest to NIR. Second, NIR-light can penetrate much deeper into tissue than UV or visible light, therefore, NIR-PIT could treat not only the surface but also the entire thickness of the transplanted tissue by exposure to NIR at the surface. Finally, NIR-PIT can be repeatedly used to eliminate target cells without limitation. This method is useful when target cells express sufficient copies of target molecules on the cell surface18.

However, there are a few limitations to this technique. Firstly, the permeability of the APC is limited since it is a large molecule. To overcome this problem, repeated NIR-PIT treatment or antibody fragments can be exploited18,19,22. Another limitation is light penetration. Although the NIR-light can properly penetrate in vitro culture, translation to in vivo treatment would require adapted approaches such as digestive endoscopy, bronchoscopy, or direct thoracoscopy with fiberoptics to move the light source closer to the target region.

Further adaptations of NIR-PIT will allow for the use of this method in both local and specific cell elimination in many fields, such as immunomodulation or tumor microenvironments24-26.

This research was supported by the Intramural Research Program of the National Institutes of Health, National Cancer Institute, Center for Cancer Research. 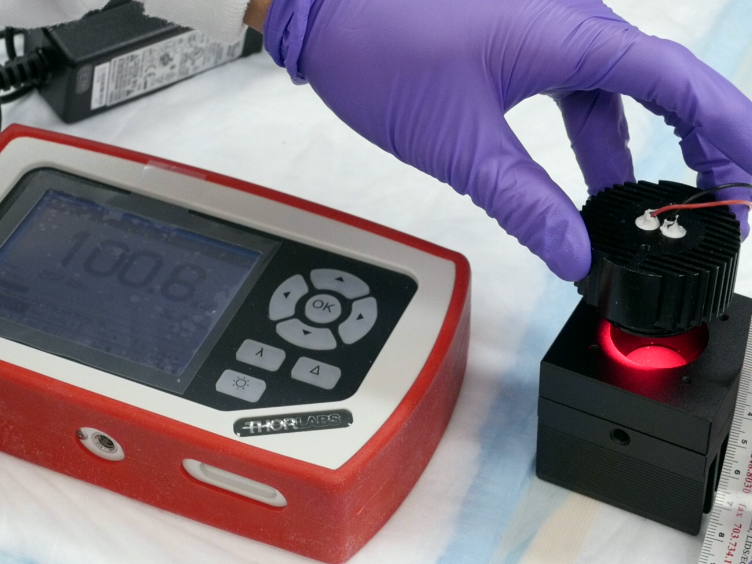