A protocol for the synthesis and characterization of diffusive motion of cyclic polymers at the single molecule level is presented.

We demonstrate a method for the synthesis of cyclic polymers and a protocol for characterizing their diffusive motion in a melt state at the single molecule level. An electrostatic self-assembly and covalent fixation (ESA-CF) process is used for the synthesis of the cyclic poly(tetrahydrofuran) (poly(THF)). The diffusive motion of individual cyclic polymer chains in a melt state is visualized using single molecule fluorescence imaging by incorporating a fluorophore unit in the cyclic chains. The diffusive motion of the chains is quantitatively characterized by means of a combination of mean-squared displacement (MSD) analysis and a cumulative distribution function (CDF) analysis. The cyclic polymer exhibits multiple-mode diffusion which is distinct from its linear counterpart. The results demonstrate that the diffusional heterogeneity of polymers that is often hidden behind ensemble averaging can be revealed by the efficient synthesis of the cyclic polymers using the ESA-CF process and the quantitative analysis of the diffusive motion at the single molecule level using the MSD and CDF analyses.

Cyclic polymers are unique in that they do not have chain ends. They often exhibit unusual behaviors which is distinct from their linear counterpart, including increased thermal stability of polymer micelles by a linear-to-cyclic conversion,1,2 and spatial organization of DNA in bacterial cells by a loop formation.3 Topological interactions between the cyclic chains are believed to be the critical factor for such unusual behaviors.4,5 Therefore, characterizing the motion and relaxation of cyclic polymers under entangled conditions has been an important research topic in polymer science for decades.6

Cyclic polymer dynamics has been investigated using both synthetic and naturally occurring molecules by means of ensemble averaged experimental methods such as nuclear magnetic resonance (NMR), light scattering, and viscosity measurements.7-9 However, these studies often suffer from impurity molecules in the samples.10 Furthermore, spatiotemporal heterogeneities of the motion of individual molecules caused by inherent structural heterogeneity of entangled polymers are often hidden behind the ensemble averaging in these studies. In order to characterize molecular level dynamics of cyclic polymers, a synthesis method that provides high purity cyclic polymers and an experimental and analysis methods that allow for quantitative characterization of molecular motion at the single molecule level have to be developed. Here, we will show a method to synthesize high-purity cyclic and dicyclic poly(THF)s that incorporate a fluorophore unit using an electrostatic self-assembly and covalent fixation (ESA-CF) process11-13 and a method to analyze the motion of the individual fluorophore-incorporated polymer chains using a combination of mean-squared displacement (MSD) and cumulative distribution function (CDF) analyses.

A proper data processing has been shown to be essential for the accurate characterization of the diffusive motion. With an adequate MSD and CDF analyses, a multiple-mode diffusion of the cyclic and dicyclic polymers in the melt and semi-dilute solution of the linear polymer chains has been revealed,14-16 suggesting the significant effects of the topological states of the polymers on the diffusive motion of the chains under entangled conditions.17 While the experimental and analytical approaches to characterize the motion of the cyclic polymers are described in this protocol, the same method can be used to quantitatively characterize the diffusive motion in many other heterogeneous systems. The approach would be especially suitable when multiple diffusion components existing in the samples are to be analyzed.

1. Synthesis of Monofunctional and Bifunctional Poly(THF)

4. Analysis of the Diffusive Motion 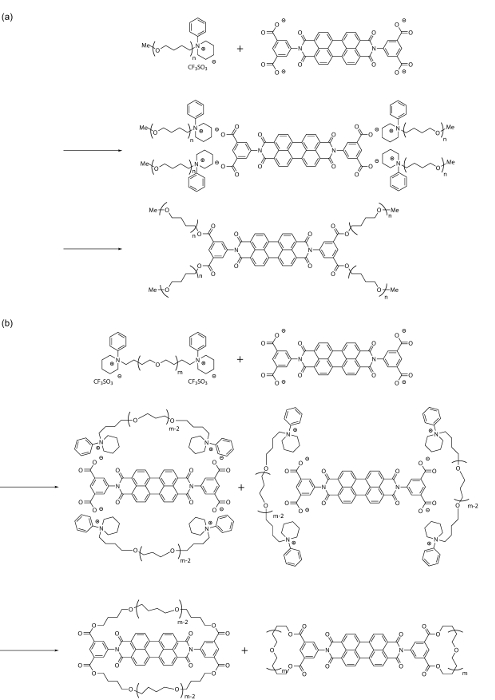 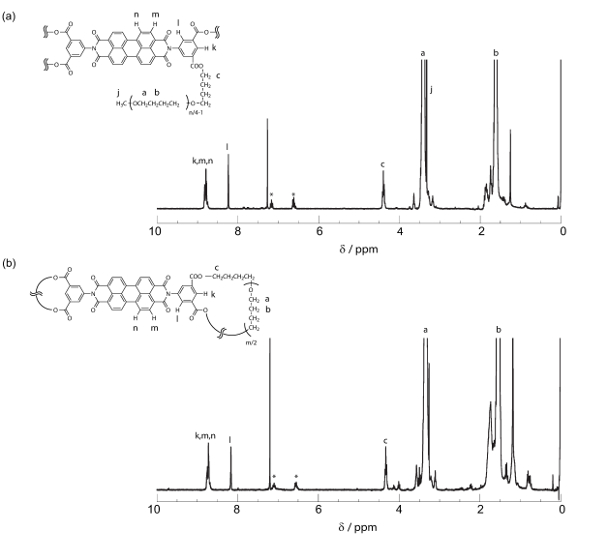 Figure 2. Characterization of the synthesized polymers. NMR spectra of (a) 4-armed star polymers and (b) 8-shaped dicyclic polymers. Please click here to view a larger version of this figure.

Figure 3 (movies). Single molecule fluorescence imaging of the perylene diimide-incorporated poly(THF)s. Time-lapse fluorescence images of (a) 4-armed star polymers and (b) 8-shaped dicyclic polymers in the melt of non-labeled linear poly(THF). Scale bar = 5 µm. Please click here to view movies (a) and (b).

Figure 5. CDF analysis of the perylene diimide-incorporated poly(THF)s diffusing in the melt. Experimentally obtained cumulative distribution functions (iΔt = 7.5 - 75 msec) in the form of 1-P for (a) 4-armed star polymers and (b) 8-shaped dicyclic polymers in the melt of non-labeled linear poly(THF). Dashed lines show fittings with (a) equations in 4.2.3.2 and (b) equations in 4.2.3.3.14 Please click here to view a larger version of this figure.

The 4-armed and 8-shaped polymers were prepared via the ESA-CF protocol (Figure 1), which is a critical step for the synthesis.12,24 Monofunctional and bifunctional linear poly(THF)s with N-phenylpiperidinium end groups were synthesized according to the previous procedure.11 The ion exchange was carried out by reprecipitation of an acetone solution of a polymer precursor with triflate counteranions into an aqueous solution containing an excess amount of carboxylate.

The covalent conversion of the ion-exchange product for the 4-armed star polymers was performed in toluene (4.9 g/L) by reflux for 4 hr. If the conversion is not sufficient, extend the reaction time. The covalently bonded product was obtained by silica gel column chromatography with acetone/n-hexane and reprecipitation in water. The 1H NMR of the 4-armed polymers is shown in Figure 2a. This ESA-CF procedure allows for the effective synthesis of cyclic polymers. However, this protocol is limited to polymers that have cyclic onium end groups.

For the 8-shaped polymer product, the reaction was carried out in toluene in dilution (0.2 g/L) under reflux for 4 hr and resulted in the formation of a large portion of an insoluble fraction, presumably due to the intermolecular reacted products. A soluble portion was reprecipitated in n-hexane, subjected to silica gel column chromatography with acetone/n-hexane, and reprecipitated in water. The obtained crude product was subjected to column chromatography with size exclusion beads and recycle GPC to allow isolation of the 8-shaped polymer product. The 1H NMR of the 8-shaped polymers is shown in Figure 2b. This ESA-CF protocol can be applicable to further complex topological polymers.

Polymer dynamics, including diffusive motion, has been described as ensemble-averaged values in the conventional methods such as NMR,7 light scattering,8 and viscosity measurements.9 Indeed, the heterogeneous diffusive motion revealed by the single-molecule imaging16 is often very difficult to detect in the ensemble-averaged methods. Considering the inherent heterogeneous nature of polymers,25-27 the method reported in this protocol is not restricted to the characterization of topological polymers, but is applicable to all kinds of polymers under entangled conditions.28 Furthermore, the approach reported in this protocol will find a wide application in the analysis of heterogeneous diffusion in complex systems, such as molecular diffusion through mesoporous materials.29

This work was supported by a Grant-in-Aid for Scientific Research No. 22750122 (S.H.), No. 26288099 (T.Y.), and No. 23350050 (Y.T.) of the Japan Society for the Promotion of Science. S.H. is grateful for The Kurata Memorial Hitachi Science and Technology Foundation. The research reported in this publication was supported by the King Abdullah University of Science and Technology (S.H.). 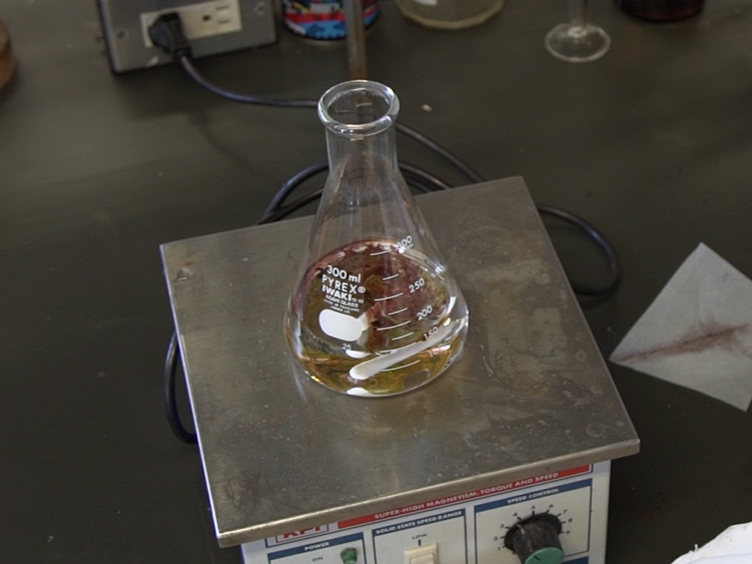