The comet assay is an efficient method to detect DNA damage including single and double-stranded DNA breaks. We describe alkaline and neutral comet assays to measure DNA damage in cancer cells to evaluate the therapeutic effect of chemotherapy.

DNA damage is a common phenomenon for each cell during its lifespan, and is defined as an alteration of the chemical structure of genomic DNA. Cancer therapies, such as radio- and chemotherapy, introduce enormous amount of additional DNA damage, leading to cell cycle arrest and apoptosis to limit cancer progression. Quantitative assessment of DNA damage during experimental cancer therapy is a key step to justify the effectiveness of a genotoxic agent. In this study, we focus on a single cell electrophoresis assay, also known as the comet assay, which can quantify single and double-strand DNA breaks in vitro. The comet assay is a DNA damage quantification method that is efficient and easy to perform, and has low time/budget demands and high reproducibility. Here, we highlight the utility of the comet assay for a preclinical study by evaluating the genotoxic effect of olaparib/temozolomide combination therapy to U251 glioma cells.

The comet assay was first developed by Ostling and Johanson in 1984 by demonstrating the migration of DNA fragments from nuclei under a neutral condition1. The technique was later developed by Singh et al., showing that an alkaline condition substantially increased the specificity and reproducibility of the assay2. Since then, the neutral comet assay is mostly used to detect double-stranded DNA breaks, whereas the alkaline comet assay is more sensitive for smaller amounts of DNA damage, including single and double strand DNA breaks, alkali-labile sites, DNA-DNA or DNA-protein cross-linking, and DNA single-strand breaks associated with incomplete excision repair sites3,4. Both assays allow visualization of fragmented DNA, and provide a straightforward way to quantitatively evaluate DNA damage. The comet assay is regarded as a sensitive method for in vitro and in vivo genetic toxicological studies and is applicable to different research areas, such as early drug-candidate selection, environmental monitoring, human biomonitoring, and fundamental research in DNA damage and repair5.

The principle of the assay is that under an electric field, fragmented DNA migrates out of the nucleoid body (also known as the "comet head") and forms a DNA stain in the agarose gel (also known as the "comet tail"). With nucleotide staining, the extent of DNA damage can be quantified by analyzing "comets" formed by this single cell electrophoresis. Calculation of the tail moment can further help to compare DNA damage among different experimental groups. Compared with traditional methods of DNA damage detection, the comet assay is direct, sensitive, inexpensive, and relatively simple.

Radiotherapy and chemotherapies are common strategies for cancer treatment by generating single strand and double strand DNA breaks in chromosomes6. The recent advancement in DNA repair inhibitors allows a more effective genotoxic effect by combination chemotherapy, and therefore, potentially reduces systemic side effects such as anemia, infection, and bone marrow suppression7,8. In this study, we showed the investigation of a poly (ADP-ribose) polymerase (PARP) inhibitor, olaparib (Ola)9. PARP is an abundant nuclear protein and is responsible for DNA base excision repair by forming a poly (ADP-ribose) polymer10. Temozolomide (TMZ) is an orally available alkylating agent and has been widely used for glioma patient treatment. By using the comet assay to quantify DNA damage, we demonstrate that combining olaparib with temozolomide profoundly enhances the DNA damage in glioma cells, which suggests olaparib/temozolomide combination therapy is an effective strategy to treat glioma, as compared with temozolomide alone11.

NOTE: The visualization and quantification of DNA breaks are based on epifluorescence microscopy and the comet assay software (see Table of Materials)12.

The present protocol describes a step-by-step workflow for the comet assay execution and data analysis (Figure 1). Results from the alkaline and neutral comet assays showed that the comet tail of doxorubicin-treated U251 cells (1 µM, 20 h) was longer and had higher DNA intensity, suggesting a substantial accumulation of fragmented DNA due to chemotherapy (Figure 2). 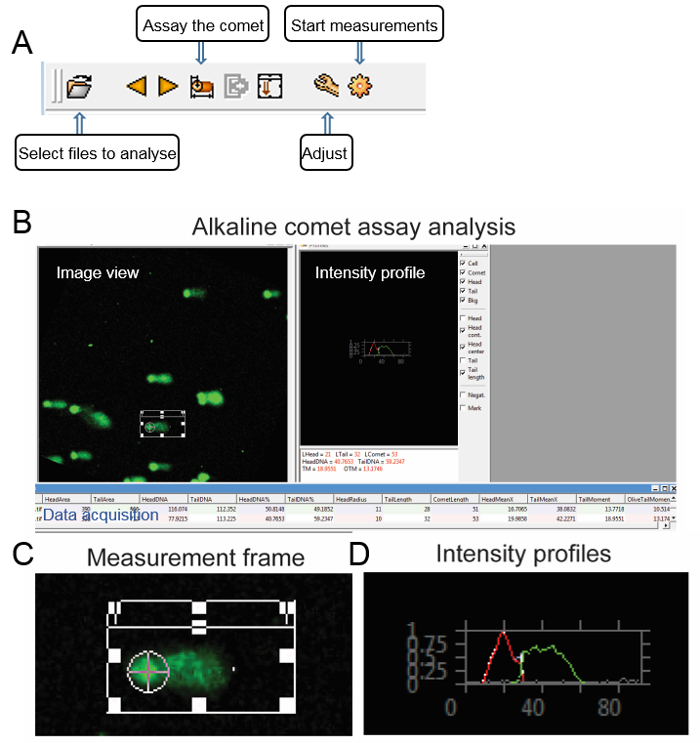 Figure 2: Representative images of the alkaline and neutral comet assays. U251 glioma cells were treated with doxorubicin and investigated by alkaline (upper panels) and neutral (lower panels) comet assays (Scale bar = 10 µm). Please click here to view a larger version of this figure. 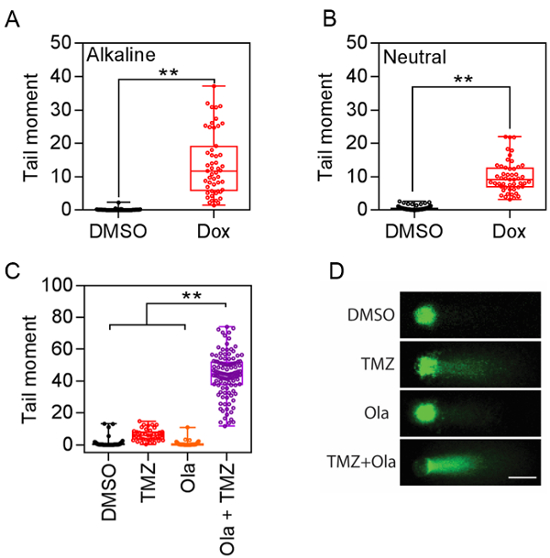 The comet assay is an efficient tool to measure single and double-strand DNA breaks at the cellular level. The assay has been widely applied as a "golden standard" in studies regarding genotoxicity and biomonitoring13, ranging from base lesions, DNA crosslinks, drug development, and alkali sensitive sites. In the present study, we showed two distinct step-by-step protocols for alkaline and neutral comet assays, respectively. Combining single cell electrophoresis, fluorescent microscopy, and image interpretation, both the alkaline and neutral comet assays provide quantitative approaches to evaluate the extent of DNA damage in vitro.

Several key steps are essential for the successful execution of the comet assay. For example, care should be taken in the steps of reagent preparation. Each solution should be freshly prepared and kept at the appropriate temperature for at least 30 min before use, to prevent endogenous DNA damage or repair during sample preparation. Another vital step is the preparation of viable single-cell suspension. It is important to keep the agarose at 37 °C before use, to maximize cell survival during preparation of the comet slides. The cell/agarose suspension should be prepared immediately before starting the assay. Using the side of pipette tips to spread the cell/agarose suspension helps to achieve a thin layer of agarose on the slides, so that most of the cells can be positioned in the same focal plane during microscopy. Optionally, scratch the edges of the slides using a diamond-tipped pen to improve the agarose attachment.

Despite the advantages of the comet assay, there are several limitations of this traditional method14,15. For example, the throughput of the comet assay is limited by the process of the glass slides preparation. In some occasions, an eight-welled glass slide provides a solution to improve assay throughput. Another limitation is that the comet assay simply represents the ratio of the fragmented DNA in cells. Additional supportive information is required to thoroughly depict the cellular changes besides DNA damage. In that case, apoptosis analysis, γH2A.X staining, and immunoblotting could be very helpful to provide a thorough analysis of different aspects to reveal the effect of DNA damaging agents.

There are numerous software for comet image analysis and the output includes a variety of different parameters. The most commonly used parameters are the tail length, the percentage of DNA in the tail, and the tail moment. Tail length only can be used at low levels of DNA damage, since it does not tend to change once the tail is established14. Subsequently, the intensity of the tail increases as the damage is enhanced. The percentage of DNA in the comet tail is another useful parameter, as it is linearly related to the breaking frequency. The tail moment combines tail length and tail intensity in one single value, thus, it is the most useful and frequently used parameter.

The comet assay has been widely applied in genotoxicity testing and human biomonitoring. With the development of DNA repair enzyme inhibitors, the comet assay could a valuable tool for testing combination therapies that improve the outcome of traditional chemotherapy. 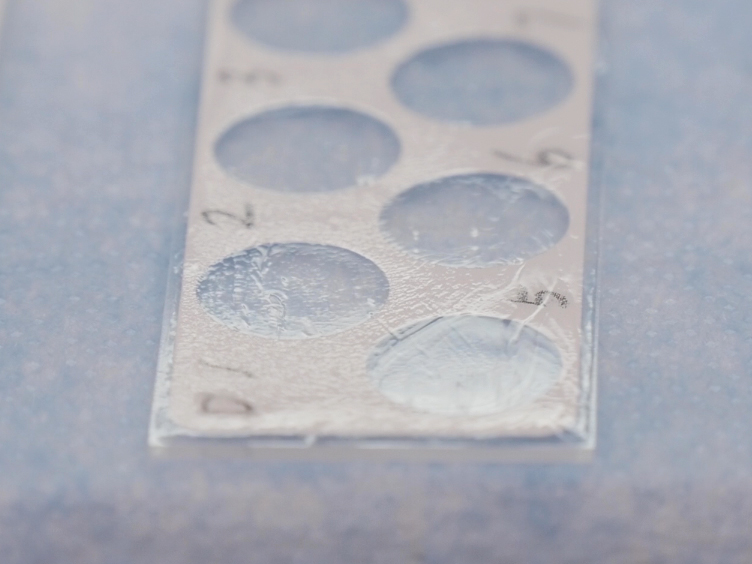